I suppose that in some ways it was inevitable that GoldenEar Technology could not rest on its laurels in producing the Triton One—a truly excellent speaker at its price of $5000 a pair. GoldenEar’s corporate slogan may be “We make the high end affordable,” but almost all of the companies that produce high-end audio products are led by audiophiles. Even those that focus on the affordable side of the high end can rarely resist trying to introduce reference-quality products.

I had mixed feelings, however, when I started reading the product announcement for the new GoldenEar Reference. As I began to skim through it, I found a passage that mentioned potentially designing a speaker that would be an “all-out assault on the state of the art,” and “producing an all-out assault on the ultimate state of the art, producing a six-figure loudspeaker to do battle with the most esoteric and expensive loudspeakers on the planet.”

Fortunately for the vast majority of audiophiles, GoldenEar stayed true to its heritage. The announcement immediately went on to state a very different goal: To create “a loudspeaker destined to raise the bar and set a completely new performance standard for reasonably priced, affordable loudspeakers.” “Reasonably priced” also actually turned out to be reasonably priced—well, reasonably priced by high-end standards. The GoldenEar Reference costs $4250 each, or $8500 a pair.

When the review pair arrived, its sound sent a far more important message. The Triton Reference is a major improvement over the Triton One, and is a truly excellent speaker for the money. I’ll leave judgments about a “completely new performance standard” to GoldenEar’s marketers, but the Reference does everything exceptionally well for a speaker near its price range. It offers a remarkable amount of transparency, life, and soundstage detail along with some of the best-integrated powered subwoofer performance I’ve heard at anything like the price. 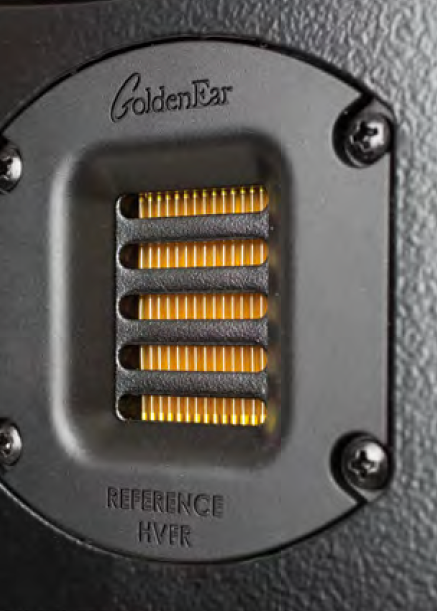 GoldenEar’s Explanation of Why It Developed the Triton Reference
Before I get to the sound and the music, however, I should mention the sidebar to this review. I normally try to provide a detailed technical description of any product I review, but in this case, I pushed Sandy Gross, the head of GoldenEar, into explaining the design rationale behind the speaker.

I also asked him to focus on the tradeoffs that he had to make relative to those six-figure super-references, and on the specifics of the improvements over the Triton One and the extent to which they involved any diminishing returns in value for money, and the fact that a pair of Triton References costs 70% more than a pair of Triton Ones.

Rather than simply do an interview, he took the time to provide a detailed response, and one that does a great job of describing the goals behind the new Triton Reference and its technical features. I’m still struggling with his nicknaming the speaker the “T Ref,” and I can’t quite shake the image of a new version of Jurassic Park where a “T Ref” starts eating the reviewers at an audio show. Nevertheless, his explanation of the speaker is objective enough to provide an exceptionally sound picture of the design rationale behind the Triton Reference, the changes in its components and technology, and the how these changes are intended to affect the music.

If anything, I think Sandy downplays the importance of one key aspect of the Triton Reference. The Triton One covered its body in fabric in order to deliver exceptional sound for the money. The Triton Reference has wood sides and a matching base that are finished in a glossy piano black. It is a substantially more attractive speaker, has no techno-geek visual features, and is 58″ tall and 22 ¼” deep, but only 6 ¾” wide at the front and 13 ½” at the back. Form follows function in a really attractive way, and in visual terms it’s a speaker a wife or partner can easily live with.

The Triton Reference and the Music
As Sandy’s sidebar states, the Triton Reference is not some revolutionary advance over the Triton One, but it does make meaningful sonic advances in every respect and in ways that seem to more than justify its costs in comparison with other speakers in anything near its price range.

One of its most important features is to combine better performance—while also making the loudspeaker compatible with a wide range of electronics and cables—with a balance of sound qualities that make it a pleasure to listen to over extended periods of time. The “gee whiz” factor in the sound of a new speaker disappears when you realize that it involves added coloration and/or produces listening fatigue.

Like the Triton One, the Triton Reference has a very smooth overall timbre through its frequency range, with deeper bass, smoother midrange with more detail in the upper midband, and a cleaner treble with a great deal of air. This is particularly true if it is tilted so the tweeter is directed at the listener’s ears in the primary listening position. It is a remarkably seamless speaker in timbre/frequency response, soundfield, and imaging for anything close to its cost.

My initial reaction was that the Reference did have a slightly “soft” or warm voicing, but a combination of break-in and better adjustment of its subwoofer level made it clear that the Triton Reference had excellent upper midrange and treble detail but without any of the touch of hardness that can occur with some dome tweeters or with speakers that are voiced to emphasize detail by adding energy in the upper midrange. 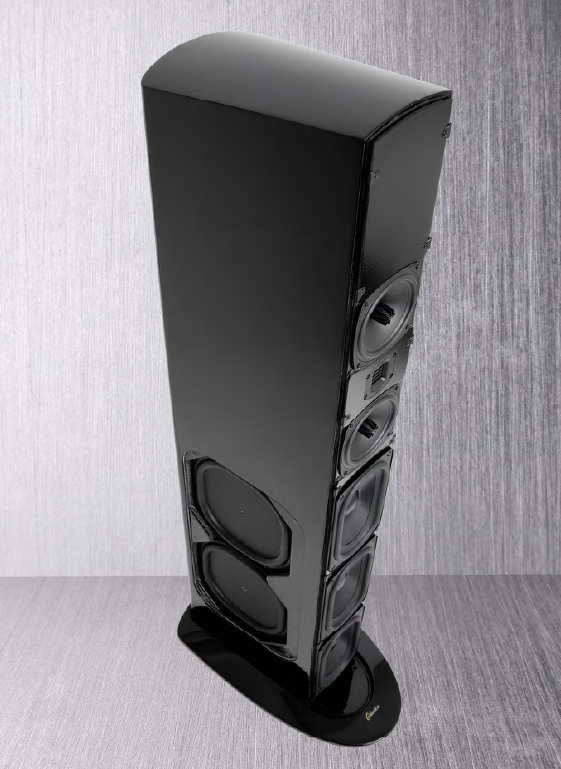 It was apparent that the Reference did have the all warmth it should have, and that its reproduction of the lower midrange and upper bass was exceptionally well balanced. This is a speaker that minimizes listening fatigue even when the music is miked too closely, but does not mask upper midrange detail. It also measurably reproduces highs up into the supertweeter region.

GoldenEar’s technical literature claims the Triton Reference has substantially improved crossovers with upgrades to better-sounding components, such as film capacitors, that may help explain its improved coherence. At the same time, the speaker’s pleasing sonic qualities may also reflect the use of new drivers—including a new ribbon and upper-bass/midrange—in a redesigned array.

What is equally important is that the Triton Reference has a remarkably coherent set of dispersion characteristics and a wider, more stable, and exceptionally detailed soundstage. In fact, if you audition this speaker, I would suggest bringing recordings with truly demanding and natural soundstages, so you could hear how well reproduced they are. Jazz at the Pawnshop is one classic example that most audiophiles possess, but a really good natural recording of a symphony can be even more revealing.

I have a 96kHz/24-bit version of a Tauno Hannikainen and Tossy Spivakovsky recording of Sibelius’ Violin Concerto that was originally captured on 35mm tape back in 1960; in both the digital and LP versions it’s a classic. A properly set up pair of Triton References (widely spaced with carefully adjusted toe-in, good spacing from the sidewalls, and enough space from the rear wall to get smooth, deep bass) playing back this source file revealed a wide range of subtle aspects of this recording’s imaging with excellent soundstage width and full centerfill. The tape hiss on this recording is a minor distraction, but the Reference’s ability to float such a detailed and natural soundstage still made this concerto a true pleasure even nearly 60 years later.

As for nuance, the Reference is again better than the already very good Triton One. I get a lot of pleasure from cello music and one of my favorite pieces is J.S. Bach’s Cello Suite No. 1 in G major [BMV 1007]. I already own seven recordings, and now have access to a long additional list from Tidal. If you want to judge a speaker’s ability to deliver detail, work your way through the opening passages of the first movement from a Casals recording in the 1930s to one of today’s best performances, and see just how many subtleties—even from a solo instrument—a really good transducer like the Triton Reference can reveal.

The Reference was equally revealing of the nuances in female voice. Brass and woodwinds were very clean and natural, and the Reference handled difficult-to-record instruments such as the recorder and harpsichord as well as my recordings permit. As for strings, it did a superb job of reproducing the subtleties in the performance and the character of the Stradivarius instruments used in a L’Archibudelli, Smithsonian Chamber Players recording of Mendelssohn and Gade’s Octet for Strings [Vivarte 1992].

Unlike many speakers, the Triton Reference did not have some particular listening level that seemed to bring out its best characteristics. The best listening level was always the one that best suited the music, rather than the one that best suited the speaker. No loudspeaker can alter the changing frequency sensitivity of the human ear to bass and treble as the sound level rises, but the Reference did not introduce any clear coloration at low or high levels.

Thanks in part to its integrated subwoofer, which is powered via an 1800-watt, DSP-controlled switching amp, when it comes to its more saurian sound character, the “T Ref” proved to be one of the few speakers that can actually reproduce very-low-frequency organ, bass guitar, and synthesizer bass down to subwoofer levels—provided that it is properly set up and placed, and that the room allows deep bass reproduction. 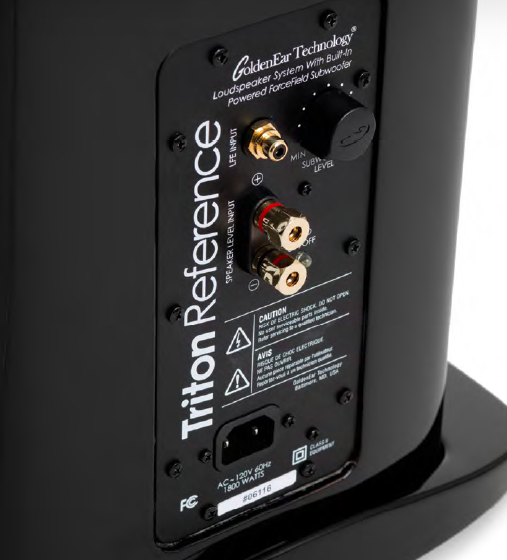 The Triton Reference did an excellent job with the demanding bass in the Reference Recordings version of Copland’s Fanfare for the Common Man performed by Eiji Oue and the Minnesota Orchestra. It had very clean bass drum transients as well as sustained musical power.

The Reference outperformed some very expensive competition in handling the extraordinary deep bass notes and dynamics on bands 2, 13, and 14 of Jean Guillou’s performance of Mussorgsky’s Pictures at an Exhibition. It also did as much as possible to reproduce the complex mix of deep lower frequencies, massive orchestral power, and soundstage imaging in my recording of the last movement of Saint-Saëns Symphony No. 3. Like Mahler’s “Symphony of a Thousand,” there are some pieces of music that are simply too massive to accurately reproduce in the home.

In short, the Triton Reference is one of the few loudspeakers I’ve encountered that can actually produce truly low musical bass and warble test tones down to the lowest subwoofer depths and do so in ways that are properly integrated into the overall response of the speaker. It really does bring out the deepest notes a recording allows with tight detail  and without exaggeration. It is not room-placement-proof. Care is needed to keep the subwoofer level restrained to natural music levels, and proper spiking can help, but only a few far more expensive speakers—normally with digital room compensation—have performed better in my system.

And just to be clear, I’d add the same praise for its ability to handle rock ’n’ roll such as the Stones, and jazz such as the MJQ, which is just about as contemporary as I want to get.