Ever since I heard a Mark Levinson No.334 amp grab the woofers of a Thiel CS3.6 at a friend’s house many years ago and reproduce the shuddering whacks of a bass drum on a CD titled Summon the Heroes, I’ve been chasing the deep frequencies. It’s not that this CD was particularly well recorded. It wasn’t. But the way the Levinson amps delivered the bass region was a revelation. Something was appearing that was fundamentally, palpably satisfying that simply had not been present before. The Thiels, which were notoriously difficult to drive because of their low impedance in the bass, almost sounded like a new loudspeaker. I was really impressed—and my heart sank. I now knew that, no matter how much amplifier muscle you threw at them, my own diminutive Snell E/IV loudspeakers sounded anemic by comparison. They could never compete with what I’d heard.

Since then, I’ve gone on to own or audition a number of other loudspeakers, ranging from the Magnepan 20.1 to the Wilson XLF. But even using stout amplification was never enough to satisfy me fully. Over the years, I also deployed a variety of subwoofers from manufacturers such as REL, ATC, and JL Audio. One thing I quickly figured out was that I really liked to use a pair of subs in stereo for maximum performance, which is why I used a pair of JL Audio Gothams before switching to a pair of Wilson Hammer of Thor subwoofers. Throughout my listening, I’ve been fascinated by the effects of room placement, crossover frequency, and phase adjustment. I suppose there are always some downsides to subwoofers, as well: They’re pretty much bound to impinge upon the main loudspeakers, and it’s really tough to get the blend just right between the two. But the benefits can be enormous not only in the deep bass, but also in a sense of scale and, believe it or not, detail retrieval, even in the treble region. Put otherwise, a good sub can act like a backdrop for a loudspeaker to strut its stuff.

So when Sandy Gross, the impresario of GoldenEar Technology, offered to send me a pair of SuperSub XXLs, I was more than eager to listen to them. About a year ago I reviewed his Triton Five loudspeakers, which sounded quite enticing and powerful. As nifty as they were, however, I’d have to say that his subwoofers belong in a different category. The XXLs are not good; they’re superb.

As with the Triton Five loudspeakers, GoldenEar tries to cram as much technology as possible into a small enclosure in the XXL. With a little effort, you can heft one of these fairly compact babies around and get it situated for optimal performance. I ended up putting them near the loudspeakers, as the owner’s manual recommends. With a 1600-watt Class D amplifier powering them, there really is no need to opt for corner placement, which, incidentally, the manual warns against. If anything, I was taken aback by the sheer output of the XXL, which should be able to pressurize any reasonably sized listening room. The internal amplifier itself is controlled by a 56-bit DSP device with a 192kHz sampling rate. This Programmable Logic State Machine, among other things, equalizes the drivers to ensure linear performance in the bass range, which is no small challenge. The XXL’s enclosure is constructed of high-density medite and finished in high-gloss piano-black lacquer. The driver complement consists of two fully inertially balanced 12″ long-throw active drivers in the horizontal plane and two fully inertially balanced 12 ¾” x 14 ½” planar infrasonic radiators in the vertical plane. Double this with a second sub, and you truly have a healthy amount of air displacement (and, boy, are those infrasonic radiators speedy). 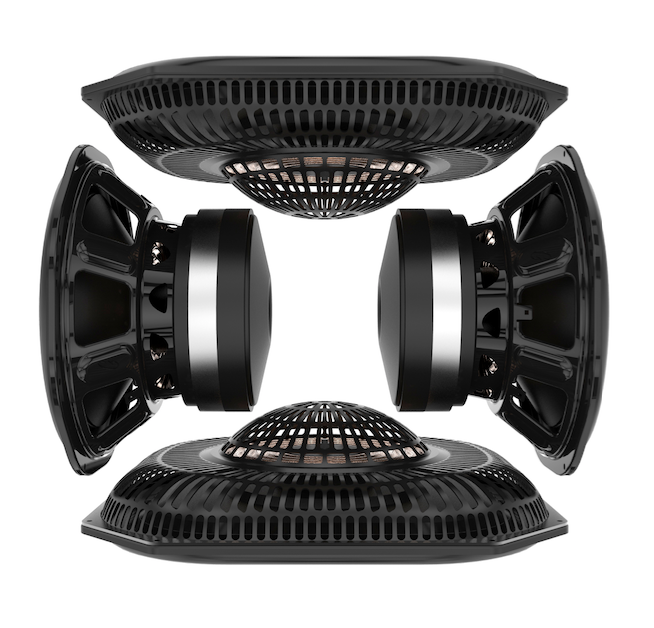 Actually, this had been my greatest apprehension about the XXL: Would it be able to deliver enough output to fill my large room? Once I set the subs up, however, I could immediately tell that they could more than deliver the goods.

The inputs to the subs are unbalanced only. In addition, I used the stock cord supplied by GoldenEar. There is no on-off switch for the subwoofer. A blue light on the rear illuminates to alert you that the subwoofer is powered up. In addition, a switch on the rear allows you to toggle between mono use (both left and right channels) with a built-in adjustable low-pass filter on both channels, or for LFE or outside low-pass filtered pass-through input. If you have two subwoofers, you can set it to play back one channel alone, either filtered or unfiltered.

Initially, I ran the XXL without the main loudspeakers to ensure that I could place them optimally. Already I was taken aback by the volume of sound they produced. When mated with my main XLF loudspeakers, I dropped the crossover frequency on the XXLs to 40Hz and set the volume control on them fairly low as well. It’s fun to hear subs pumping away, but the old adage holds true: The best sub is one that you can’t hear.

What I heard with the XXL was an exceedingly tuneful, pitch accurate, and speedy subwoofer. There was no smearing or blurring of notes. This is no muffin-top subwoofer, where you hear that old bugaboo—deep bass intruding upon the midrange. Instead, you get a sleek and svelte performer that, when called upon, will also deliver tremendous wallop.

After to listening to a couple of tracks from Madonna, just to hear the sheer grunt of the bass lines, I turned to the venerable Head Hunters album from Herbie Hancock. On the opening number “Chameleon,” the electronic bass line, which is set to a funk beat, endows the song with an elemental excitement. Even after listening to the disc for so many years, I really was quite taken by the precision with which the XXL sub not only helped improve the transient pluck of the notes, but also allowed the notes to decay for just a split second longer. There simply was none of the overhang that sometimes afflicts subwoofers.

To hear the Head Hunters SACD sound so distinctive wasn’t a revelation, but it did add a sense of realism to the proceedings. I felt as though I were hearing one notch further into the song. On the SACD Friendship, which features Clark Terry and Max Roach in a duet, the pounding of the detuned drum heads and the wailing of the virtuosic trumpet runs came through with a ferocity that compelled not simple respect but awe for these two players.

That same sense of clarity and precision came through on another recording that I’ve come to cherish, The Art of Bach, by the talented piano duo Anderson & Roe. Their recording obviously consists of transcriptions, including one of the Brandenburg Concerto No. 3 arranged by the composer Max Reger, but I feel that, rather like looking through a prism, the two-piano versions open up new musical angles into Bach’s compositions. What did the XXL bring to the table? It helped provide a foundation for the deepest piano notes, thereby subjectively improving the sense of a steady tempo on a number of the pieces. This was especially so with stately works such as the opening cantata arranged for piano. It seemed to acquire an even more tranquil and magisterial character. Ditto for a marvelous performance of a Deutsche Grammophon CD of Schumann’s violin sonatas performed by the peerless Gidon Kremer and Martha Argerich. Once again, the grand piano just sounded a notch grander with the XXL. At the same time, the quietest notes also sounded a touch more ethereal as though they were emanating from pitch-black backgrounds.

Some of this can surely be ascribed to the XXL’s effortless ability to help widen the soundstage. The best way that I can describe this effect is to suggest that the combination of deep notes and concert-hall air and ambiance that a sub like the XXL supplies adds a degree of verisimilitude that a single pair of loudspeakers cannot, no matter how low or how powerful the bass coming out of those speakers is. The stone cold truth is that a pair of subwoofers will add a vital ingredient to the sonic stew that is simply impossible to capture otherwise.

This, the latest brainchild from industry veteran Sandy Gross, is the real deal. I must admit to shaking my head at what Gross manages to extract from small packages; somehow he and his engineering team successfully defy the maxim that size matters. The XXL is a diminutive beast that offers a lot of performance for just about any stereo system. No, it doesn’t have the cachet of some of its tonier brethren. But for anyone looking for a reasonably priced subwoofer that plunges into the nether regions with musicality and dexterity, volcanic power, and subtlety, the SuperSub XXL is a must-audition. I imagine that it will win over more than a few listeners as much as it did me.