If, by any chance, audio enthusiasts required further evidence of the generational shift that has fundamentally transformed the integrated amplifier segment, they need look no further than the Gold Note IS-1000. Whereas, once upon a time, this stylish Italian beauty might have lived a full, productive life as a traditional analog linestage integrated amp, today’s market forces and listening appetites demand something more… well, abbondante. Indeed, the IS-1000 may hail from the land of Leonardo and Michelangelo but, as I discovered, in reality it’s as contemporary as anything out of Silicon Valley.

Gold Note of Italy is located a short distance from Florence. It’s a young company, having been formed in 2012. It currently employs 28 full-time employees and serves markets in forty countries. The driving force behind the firm’s success is founder and CEO Maurizio Aterini. Educated as a mechanical engineer, Aterini has had his eyes and ears on performance audio since early childhood. A staunch believer in the audio synergy that can arise from a collection of products built upon a common philosophy, he produces many types of audio gear—from amplifiers, DACs, and streamers, to turntables, CD players, and loudspeakers. All are distinctive and stylish in the Italian tradition—wood cabinets and turntable plinths are made by craftsman in Northern Italy; electronics have all-aluminum enclosures, with CNC machines carving Gold Note’s definitive shapes.

Visually, the IS-1000 is elegant with a formidable aluminum faceplate and an array of vents overflowing the top and down the side panels like a waterfall. The “tank” design of the chassis increases mass and rigidity to enhance mechanical stability and damping. In fit and finish, I’d score overall quality at a very high level. The front panel is dominated by a brilliant, square, LED color display that’s controlled by a multi-access knob. This controller operates volume conventionally. But through a combination of buttons and rotations the user can also scroll through and visually select inputs, balance, and damping (high and low). The unit is placed into standby by depressing the knob for about three seconds. There’s also a two-stage “booster” circuit for plumping up lower frequencies, similar in my experience to the loudness switch from an earlier era of audio. 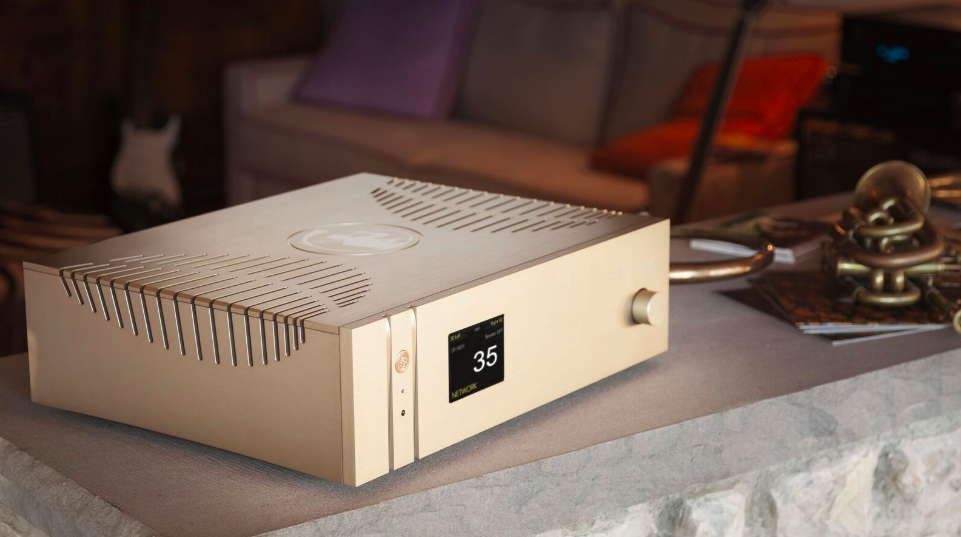 The back panel sports a pair of analog RCA inputs and an XLR input. Conveniently, RCA “Input One” performs double-duty, allowing the user to select between line-level and phono-level (mm or mc) from the front panel. Of note, the phonostage is derived from the company’s PH-10 (review forthcoming) and provides 45dB of gain to moving-magnets and 65dB of gain to moving-coils. Additionally, there are a pair of preamp outs—fixed and variable. The digital-input section provides coaxial, USB-A (suitable for a thumb drive), Ethernet, and three optical inputs.

It would be easier to list what the Gold Note IS-1000 integrated can’t do than what it can. Even so, take a breath; here we go. The DAC and streamer portion use technical innovations derived directly from Gold Note’s flagship models. Two versions are offered, the Classic with the Burr-Brown PCM1792A chipset and the Deluxe model with the Burr-Brown PCM1796 chipset for an additional $900. My review sample was the Deluxe version. PCM resolution extends to 24-bit/192kHz, while DSD64 files are converted to high-resolution PCM over UPnP protocol on USB and LAN. The digital stage is driven by a super-micro-controller Cortex-M4 core, which runs at 32 bits and, as Gold Note states in its literature, is extremely fast and stable. This micro-controller also performs safety processes, which include monitoring internal temperature to activate cooling options.

The IS-1000 is Roon ready and fully compatible with multi-room systems. Offering quick plug-and-play installation, it connects to a home network (via Wi-Fi or Ethernet), allowing streaming from Tidal, Qobuz, Spotify, Spotify Connect, Deezer with Roon, and MQA decoding. The Gold Note app (iOS and Android) permits easy browsing of music collections stored locally on a NAS or a USB sticks. It also supports media servers like Minim Server, which I have running on my Synology NAS drive, and Bubble UPnP.

The heart of the IS-1000 is its Class AB amplifier—a high-current MOSFET design that outputs 125Wpc into 8 ohms. Its power supply features a toroidal transformer custom-made in Italy. A specially treated high-dampening core was designed to eliminate vibrations. The PCBs are ultra-thick and gold-plated with double copper traces to preserve the purity of the audio signal path.

Getting the IS-1000 up and running in network media-player mode was straightforward—as simple as downloading the Mconnect control app—a free download via Android or iTunes—and connecting an Ethernet cable to a network router. For iOS, you can download another dedicated app, Gold Note IS-1000 Control. Gold Note is working on a single unified app called GN Control. Once one of the apps is downloaded the IS-1000 takes over from there. Input switching is fast with no random pops or clicks. While the app doesn’t have the graphical panache and intuitiveness of some bespoke apps, it does the job effectively.

Italy is a country that stimulates the senses like few places in the world—whether it’s an opera at La Scala, white truffles from the Piedmont region, wine from Tuscany, Michelangelo’s David in Florence, a perfect cappuccino, or just a gelato from along the Ponte Vecchio. In many ways it wouldn’t be a stretch (OK, maybe a little) to suggest this was the musical atmosphere the Gold Note conjured up (evident even if you’ve never been to Italy). It had a warmer, more romantic character that rounded off the sharper, nastier edges of recordings. Tonally, the personality of the IS-1000 was neutral throughout the midrange with intimations of extra bloom and body in the mid and upper bass. These traits were particularly fitting when listening to cellist Martin Zeller playing Bach’s Six Suites for Violincello. Evident were all the complex voices of his instrument—attack off the bow, body, bloom, and darker trailing resonances. These elements are always a challenge to reproduce. Vocals also shone with energy and presence, and seemingly settled into a comfy pocket at the center of the soundstage, without lying back too passively. The IS-1000 demonstrated a particularly deft touch with more intimate naturalistic performances like those of Brazilian singer/guitarist Ana Caram [Blue Bossa]. Her cover of “Fly Me to the Moon” brought forth the gentle interplay between her voice and her nylon-string guitar. In sum, the IS-1000 typically had a lush, slightly forgiving signature.

At idle, the IS-1000 was absolutely silent with no intrusive switching noises or electronic artifacts. However, when called upon, it purred with the fluidity and vitality of a Ferrari twelve-cylinder. Orchestral music, in fact, had a firm, of-a-piece signature that was detailed, layered, stable, and immersive. The IS-1000 reproduced performances as if they were a single block of sound within a hall. And speaking of the famed car makers of Maranello, it wasn’t just the Gold Note’s fluidity that caught my attention. It was the sensation of power in reserve that could be tapped whenever the music might require the amp to “open the throttle” a bit more. Yes, a spec of 125Wpc doesn’t sound especially powerful in 2019, but mere numbers don’t really tell the story. The robust power supply and transformer of this well-designed amp ensure performance that steps outside general power ratings. In real life, the IS-1000 imparted a grip and assuredness in the bass that immediately commanded my attention. Low frequencies were both extended and controlled. Pitch information was distinct and unwavering. Instrumental timbre in these octaves was nicely expressed. Whether it was the concussive kettledrums of Copland’s “Fanfare,” the dance-floor kickdrum slam of Michael Jackson’s mega-hit “Billie Jean,” or the fat resonances radiating from Renaud Garcia-Fons’ stand-up bass during The Marcevol Concert, the Gold Note had the palette to match.

The Gold Note also seemed to relish reproducing the hard-driving distortion and emotional weight of the blues-inflected rock classic “I Want You (She’s So Heavy)” from the Beatles’ Abbey Road album. It’s easy to be dismissive of a raw rock performance like this (at one time I was), but when it comes to the Beatles, there is always more going on in a mix if the system’s resolution is up to revealing it. Here, it’s the build-up of white noise from a Moog synthesizer that sees the track out to its sudden ending, with Harrison and Lennon’s guitars melodically doubling John’s vocal, topped by the manic artistry of Billy Preston on the Hammond. 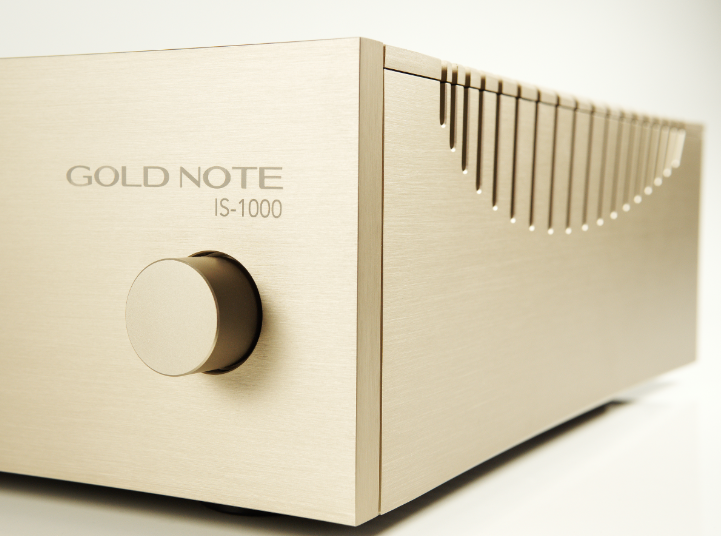 Treble octaves were smooth and non-fatiguing. Transient behavior was natural, rather than overly etched and prickly. Brass ensembles fared well with sharp assertive attacks that were not overly metallic and with a nice trailing openness on decays. The spark and intensity of aggressively bowed violins were revealed, but never to the point of upstaging the resonant wooden bodies of the instruments. Imaging was unclouded, and localization of players could be observed seemingly at a glance, as if you were actually seated comfortably in the audience about mid-hall. When all was said and done I concluded that the IS-1000 sound was not an additive one in terms of colorations. To my ears it was modestly subtractive in that it lacked a degree of toe-tapping pace and rhythmic spring that I listen for during Marc Cohn’s rollicking “29 Ways.” The Gold Note didn’t have quite the blinding acceleration and micro-dynamic sparkle of the MBL C51 or the brute force of the Pass Labs INT-250 amp, but these are minor demerits in my book. And while I have heard amplifiers that prove even more transparent and revealing of dimensional cues, orchestral layers, and back-of-the-hall images, the Gold Note acquitted itself towards the top of its class in its price segment.

I should also note that most of my listening was over my network, streaming music from either my Synology NAS or via Tidal. In that context I found that the sonic “gap” between my reference Lumin S1 media player and the IS-1000’s DAC was narrower than I’d have imagined a few short years ago. The distinctions were fine ones, and although the Lumin S1 edged out the IS-1000 with its greater openness and harmonic bloom, the Gold Note provided tough competition.

In today’s high-end amplifier market, it isn’t enough just to sound good anymore. Any manufacturer worth his salt must master the skills necessary to make components true multi-discipline performers. In my view Gold Note has fulfilled the expectations of enthusiasts by producing a musically engaging and highly configurable integrated. At every level of execution the Gold Note IS-1000 truly strikes the right note.