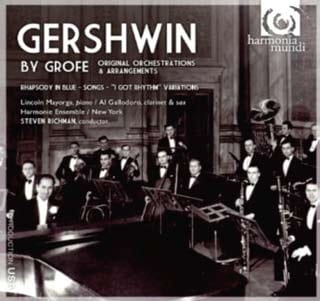 Steven Richman and Harmonie Ensemble/ New York have been a fixture on New York’s musical scene for three decades. As its name implies, the ensemble is at heart a wind band. But its precise formation varies according to the music that’s in front of it, which means a lot of repertory is open to these musicians—including, happily, Ferde Grofé’s inspired original orchestration for the Paul Whiteman Band of George Gershwin’s iconic Rhapsody in Blue, as well as the arrangements Grofé made for Whiteman of a number of Gershwin songs. These are included on this disc together with Gershwin’s “I Got Rhythm” Variations for piano and orchestra (in the composer’s own extraordinarily resourceful scoring), and a very special rendition of “Summertime” from Porgy and Bess.

For this splendid recording, apparently it wasn’t enough for Richman and Harmonie Ensemble/New York to go back to the arrangements Grofé made for Whiteman’s band—they also got one of Whiteman’s reed players, the legendary Al Gallodoro, to sit in with them. I say “legendary,” but until ten years ago the name meant nothing to me. It was James Galway, then newly knighted, who introduced me to Gallodoro’s playing when I visited him in the summer of 2000 at his home in Meggen, Switzerland, outside of Lucerne. Sir James played a recording for me, and simply smiled as my jaw dropped, and then dropped some more. Gallodoro was then 87, an astonishing age at which to be so good; when he laid down “Summertime” for this recording, in an arrangement for alto sax and piano with Lincoln Mayorga at the keyboard, he was 93, and still had it. He’s also heard here in Grofé’s arrangement of “Fascinating Rhythm” (recorded in 2004, when he was 91), and he leads the reed section in Rhapsody in Blue. There’s much to admire here beside Gallodoro’s playing, though it’s a little hard to get over the fact that in addition to a bunch of very good contemporary musicians you are hearing a guy who was featured soloist with the Whiteman band from 1936 to 1965. You want authentic? You got it.

The playing of HE/NY is characterized by a swinging, relaxed virtuosity, tight ensemble, and perfect voicing of chords. This is “symphonic jazz” just as Whiteman styled it. Pianist Mayorga, who solos in the “I Got Rhythm” Variations and Rhapsody in Blue, is completely on top of it, magnificent. The recordings, made at the SUNY Purchase Performing Arts Center, were closely miked and mastered at a very high level, causing Mayorga’s piano to sound like a beast at my normal volume setting. Knocking it back four clicks put the musicians in the right relationship with the space and each other; suddenly, the soundstage became three-dimensional, with a depth corresponding to its breadth, and the experience went from listening to a recording to being at a performance. Still, for the attentive listener, there’s a little fillip to remind you that this is a recording, and one with a connection to the past: the sensational clarinet glissando that begins Rhapsody in Blue…played by Mr. Gallodoro…starts out in mono (!), and blows into stereo at the top B flat. Fun!

When the core instrumentation for a band consists of drums, […]