Those of you who are familiar with my review of the German Physiks Unlimited II, the HRS-130’s little brother, may recall my esteem for Lincoln Walsh’s revolutionary bending-wave transducer, developed in the early 1960s and later adapted by German Physiks. Superficially resembling an inverted ice cream cone, Walsh’s coherent-sound loudspeaker was a serious attempt to mimic the soundfield produced by a small cylinder pulsating radially with every portion of its area moving in and out simultaneously and in phase with the input signal. This, according to Walsh, is coherent sound. It should be intuitively obvious that such a design is capable of wide-range operation and by its nature generates an omnidirectional radiation pattern in the horizontal plane. There are many twin-cone wide-range drivers out there but none of them can match the phase fidelity of the Walsh transducer because of the conventional drivers’ severe breakup modes in the upper midrange. In contrast, a bending-wave transducer exploits the non-rigidity of the diaphragm material, working with it rather than fighting it.

In the late 1970s Peter Dicks picked up Walsh’s mantle with the express goal of improving on the original aluminum-sheet-based approach. His titanium-based prototypes eventually caught the attention of German Physiks’ Holger Mueller who went on to commercialize the Dicks Dipole Driver (DDD). German Physiks has been manufacturing DDD-based designs since 1993 and has continued to evolve the technology in excursion capability, power handling, and enhanced bandwidth to beyond 24kHz. A carbon-fiber DDD became available in 2006 alongside the classic but fragile titanium type. Much more robust physically and capable of being driven harder, the carbon-fiber DDD represents a considerably more practical engineering solution. Because the DDD is optimized in dimensions and cone profile it does not have to be supersized to increase efficiency. Hence, the same driver is used in all models regardless of cost, while several drivers are used in parallel in some of the upper-end models in order to increase overall sensitivity. The HRS-130 deploys one carbon-fiber DDD and a 10-inch floor-loaded woofer (rather than the 8-inch of the Unlimited Mk II). The enclosure is also bigger than that of the Unlimited and uses a sophisticated octagonal cabinet construction in order to reduce colorations and to smooth the bass output. Specifically, a smaller sub-enclosure sits above the main woofer enclosure, with the two linked by a small port. This structure forms a Helmholtz resonator. The sub-enclosure and port dimensions are calculated to allow energy at the woofer’s resonant frequency to pass into the sub-enclosure where it is dissipated by damping material, thus smoothing the bass response. The woofer is crossed over at about 220Hz; above that, it’s all up to the DDD. That means that not only the power range of the orchestra but also the entire vocal range are reproduced without resorting to crossovers and tweeters.

Omnidirectional speakers are well known for being able to significantly widen the listening sweet spot, allowing listeners to escape the spatial confinement imposed by directional speakers. There was a time in the 1970s when a highly directional polar response was considered desirable in order to minimize room reflections. That works well for monitor-grade loudspeakers, which are used in the nearfield, but it’s not necessarily the right solution for home listening in the far field, where at least half of the acoustic energy is due to room reflections. In the far field, a uniform power response helps minimize room colorations while enhancing the spatial illusion. For me it’s about the illusion of being there, of immersing myself to the extent possible in a believable 3-D soundfield. Now that’s a tall order for any two-channel audio system, but an omnidirectional speaker gets me closer to that goal than a conventional box speaker. The HRS-130 was able to generate such a palpable soundstage that I felt at times that I could walk right into it. In fact, I did just that a couple of times—got out of my chair and walked into the soundstage. It was spooky getting behind one of the speakers while continuing to experience a realistic presentation. (Don’t try this with a typical box speaker.) 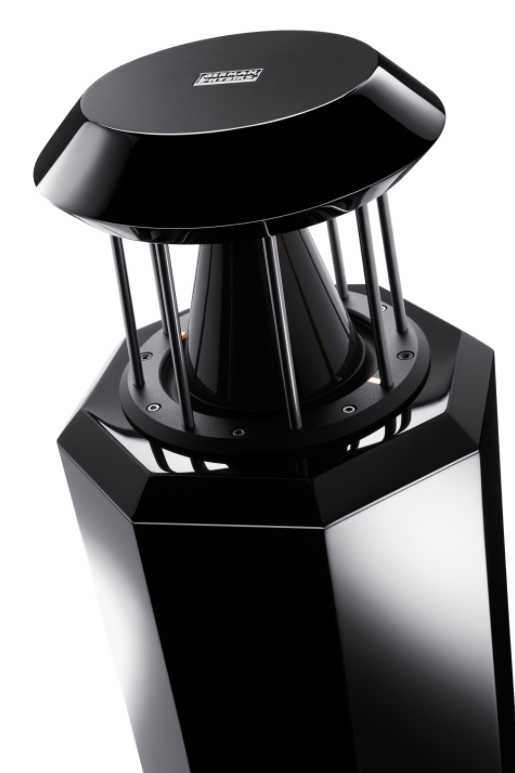 So why, you might wonder, aren’t omnidirectional speakers more popular? Conventional wisdom has it that such speakers lack image specificity. To be clear, the artifice of pinpoint imaging generated by directional box speakers has become the de facto paradigm in many high-end circles. The truth is that an omni can image very well indeed, not in the vein of tiny pixels on a wide sonic canvas but rather in a more realistic holographic fashion. I’ve never experienced pinpoint imaging during a live performance and certainly not in a concert hall. It’s an effect that can be achieved in multi-track studio recordings, especially when individual tracks in the mix are not drenched in artificial reverb. It would be fair to say that audiophile expectations and preferences regarding image specificity fall on a fairly broad continuum, and I totally get it, it’s just that my preference is for the sense of image scale and palpability that only an omni or planar speaker can deliver.

The key with any omni speaker is to avoid early reflections that are within a 5-to-10ms time window of the direct sound. The worst thing you could possibly do, tantamount to sonic malpractice, would be to place an omni right up against a wall. The end result is likely to sound similar to the Bose 901 direct-reflecting loudspeaker. The 901’s motivation was to approximate the direct-to-reflected sound ratio measured in concert halls. This was done by using an array of drivers, most of which were aimed at the rear wall so as to splash reflected sound over the listening room and achieve a spacious but distinctly vague soundstage. The HRS-130’s owner’s manual offers guidance on speaker setup. The basic advice is to allow a minimum of one meter of breathing space to the rear and side of each speaker. That, however, may be a bit difficult to achieve in a small room, and argues for further controlling early reflections via acoustical treatment. Unless you prefer the extreme reflective acoustics of a racquetball court, you’ve already taken care to treat your listening space with absorptive elements such as carpeting, drapes, wall hangings, or a sofa. Specifically, what worked for me was to approximate a live-end dead-end (LEDE) environment by adding a couple of bass traps behind the listening seat, GIK acoustic panels (2′ x 5′) to the sides, and Audimute absorption blankets behind the speakers. The before-and-after impact of the acoustic treatment was quite dramatic. With the LEDE setup, image outlines could be localized within the confines of the soundstage with laser precision yet were spatially realistic in scale. For example, an upright bass should take up a fair amount of soundstage space, and that’s exactly how it was portrayed, with gobs of palpable extension.

A welcome benefit of the LEDE acoustic treatment was a beefing up of tonal weight through the lower midrange and upper bass. This is the frequency band at which absorption material efficiency typically begins to fall off. Except for the inevitable room modes below 300Hz, frequency response was fairly uniform to 20kHz, with in-room bass extension to nearly 30Hz. If you’ve become accustomed to the anemic bass balance of a small stand-mounted speaker, you’ll be in for a big surprise with the HRS-130—welcome to big-tone country! The lower treble is adjustable in roughly 2dB steps (–2dB, flat, +2dB, +4dB) by moving a jumper wire on the speaker’s back panel. The treble EQ operates over the octave from 6 to 12kHz, with much of the effect being centered around 8kHz. I experimented with the –2dB and +2dB settings but always returned to the “flat” setting as being the most natural in my listening room.

I also took my time to test a variety of power amps, both tube and solid-state. It didn’t take me long to realize that this speaker had a clear preference for solid-state amplification for best bass control and detail resolution. Both my Pass Labs Aleph 30 and First Watt F7 amps sounded very nice, but I felt that I needed at least 100Wpc to meet the HRS-130’s power demands. Larry Borden of Distinctive Stereo, and the U.S. distributor of German Physiks, suggested the Merrill Audio Veritas monoblocks as a good match. Merrill Audio was kind enough to loan me a pair of the Veritas amps—a fully balanced design powered by the Hypex Ncore NC1200 Class D power modules. Power delivery into a 4-ohm load is 700 watts with a damping factor of 2000. Being a tube guy, I was a bit skeptical at first. But I have to confess that I found the Veritas to be a fantastically musical amplifier. Its level of harmonic purity is nothing short of amazing. And in concert with a natural yet detailed presentation, it won me over in spades. Truly, it is one of the most impressive power amps I’ve ever auditioned.

The Veritas elevated the HRS-130 to a performance level that kept me glued to my listening seat for hours on end. It was first and foremost about coherence, giving my auditory system a chance to relax, as in not having to work at assimilating the sound of disparate drivers. Slicing and dicing the music for consumption by several drivers has a major consequence, namely the loss of coherence since most instruments are reproduced by multiple sources of sound on a baffle. By contrast, the DDD sings with one voice—just like the real thing. The driver is literally positioned outside of a box, which allows for its 360-degree radiation pattern and is responsible for its outside-of-a-box spaciousness.

There is much more to the HRS-130 than imaging prowess. This is not a dynamically polite speaker. Microdynamics popped right out of the fabric of the music, making it a breeze to connect with the music’s emotions and drama. Note that there is a limit to the macrodynamic range of the DDD, evident when it is pushed from loud to very loud, but in a moderately sized room this was nothing to worry about. Transients benefited from the DDD’s coherence and phase fidelity, both the attack and decay portions being exceptionally well controlled. The lower midrange and upper bass were well integrated, improved in this regard over the performance of the Unlimited II. Midrange textures were exceptional pure, due to low levels of distortion through the upper midrange—the frequency band that is problematic for so many speakers with a tweeter crossover around 3kHz. Driven by a neutral amplification chain, the overall presentation was generally faithful to the program material. For the record, no frequency response peccadilloes were evident; there was no presence-region lift or gratuitous brightness to complain about. These are the sorts of “sins” of commission that may well prove attractive in the short term but quickly lead to buyer remorse. The HRS-130, on the other hand, was easy to live with over the long haul. 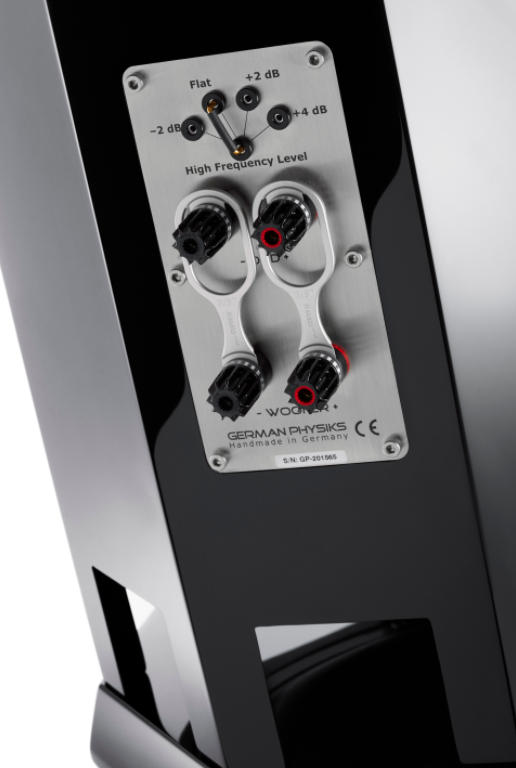 What you get here is a world-class wide-range driver that is exceptionally well engineered and superbly integrated into a speaker that is almost perfect for a small-to-medium-sized room. In my estimation, the carbon-fiber DDD is one of the top five driver innovations of the past 40 years, delivering the coherent phase and uniform power response first envisioned by Lincoln Walsh. Given the right amplifier and room setup, the HRS-130 ticks all the important sonic boxes and clearly edges out the competition when it comes to palpable imaging. No wonder the German Physiks HRS-130 is currently my favorite speaker under $25k.