I recently had the privilege of attending a unique event hosted by Larry Borden of Distinctive Stereo in River Vale, NJ, to announce and demonstrate his new line of loudspeakers from Genesis Advanced Technologies. In attendance were the chief designer and owner of Genesis, Gary Koh, as well as Merrill Wettasinghe of Merrill Audio, and Matt Weisfeld, ever the showman, of VPI. Gary had spent the previous day meticulously (it took seven hours) setting up his absolutely stunning 7-way Maestro speakers, the babies of the Genesis line and the only models not to utilize his ribbon-tweeter line array.

The system we listened to included the Class D Merrill Audio Element 116 monoblocks and Christine preamp, Gary’s own Genesis phonostage, a VPI HW40 turntable with a Van den Hul Crimson Black cartridge, and digital via an EMM Labs DAC2X and Aurender N10 music server. Cabling was a combination of Genesis and Merrill interconnects, Genesis power cords, and Genesis speaker wire. The presentation was fan-damn-tastic. The Maestro’s meshed perfectly with all the gear it was playing with to create the proverbial wall of sound. 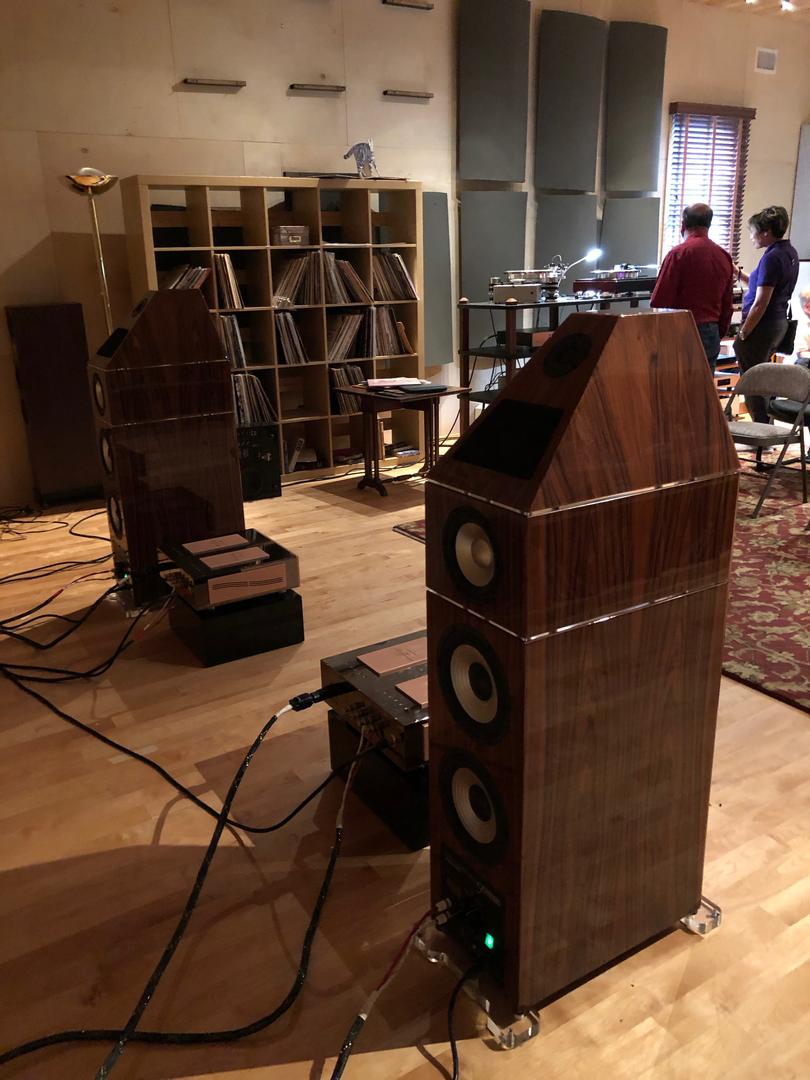 The soundstage was almost beyond belief in its wall-to-wall width, front-to-back depth, and floor-to-ceiling height. At times the stage seemed so tall it was as if we could hear the notes of the trumpet in Count Basie’s orchestra floating up to the ceiling. Typically with a soundstage this expansive image specificity suffers, but not with the Maestros. We got it all: focus and subtlety, dynamics and energy, layering and complexity, and so much, dare I say it, musicality. The four 8** powered, servo-controlled woofers offered incredibly tight and clean, room-shaking bass. I was stunned that the nine drivers in each speaker were working in such unison that they almost sounded like a point source, except that they disappeared so completely they didn’t sound like speakers at all.

The stage and imaging maintained its width, clarity, air, and specificity in many of the 15 seats available to sit in. What was evident was that the depth of stage clearly had a sweet spot at dead center, second row back. What was also evident was that the room began to show its cavernous 22* x 30* foot size as visitors began departing; it sounded better stocked with audiophiles. Clearly the cheapest tweak (other than the cost of feeding them all) would be to invite more friends over to listen in Larry’s main demo room. 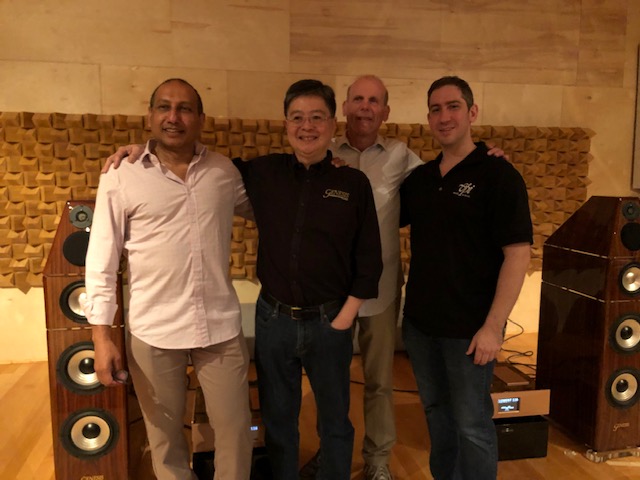 Dr. Borden (the chatty purveyor of audio at Distinctive Stereo holds a PhD in neuropharmacology) announced our guests of honor, and Merrill and Matt each took the time to explain their equipment and their design priorities. They then gave the stage to Gary who spent several hours educating us about his design principles, his NASA-level production standards, and his insanely meticulous set-up technique. He also treated us to some wonderful music, specifically Gary’s own production of the Anne Bisson LP Four Seasons in Jazz: Live at Bernie’s. He shared the trials, tribulations, and rewards of direct-to-disc recording and played the pre-production LP’s and lacquer to show how different formulations of vinyl and different times to silver the lacquer affect how the record sounds. (The differences were not subtle.) He rewarded our good listening behavior with some primo LPs, rocked the house with Infected Mushroom and Vicious Delicious, and then literally blew our minds with a special 45 of Queen’s “Bohemian Rhapsody” that left many mouths agape. Gary is not only a brilliant designer and a great guy, but also a serious music lover with the library to prove it. (If pushed, I will admit that I ended up picking up that Infected Mushroom album. Normally not my style of music but the demonstration was so impressive that I feel obligated to use it as a reference in the future.)

The Maestro (see what I did there?) also demonstrated an incredible example of how sensitive our ears can be to properly set-up speakers when he adjusted the front set screws of the left speaker to raise it 1/32 of an inch. Every single person in the room instantly heard the stage collapse and flatten. Wow! I think I need to spend as many hours as Gary did on the Maestros setting up my own speakers, although something tells me I won’t get the same results. Now that’s a skill I would like to master. 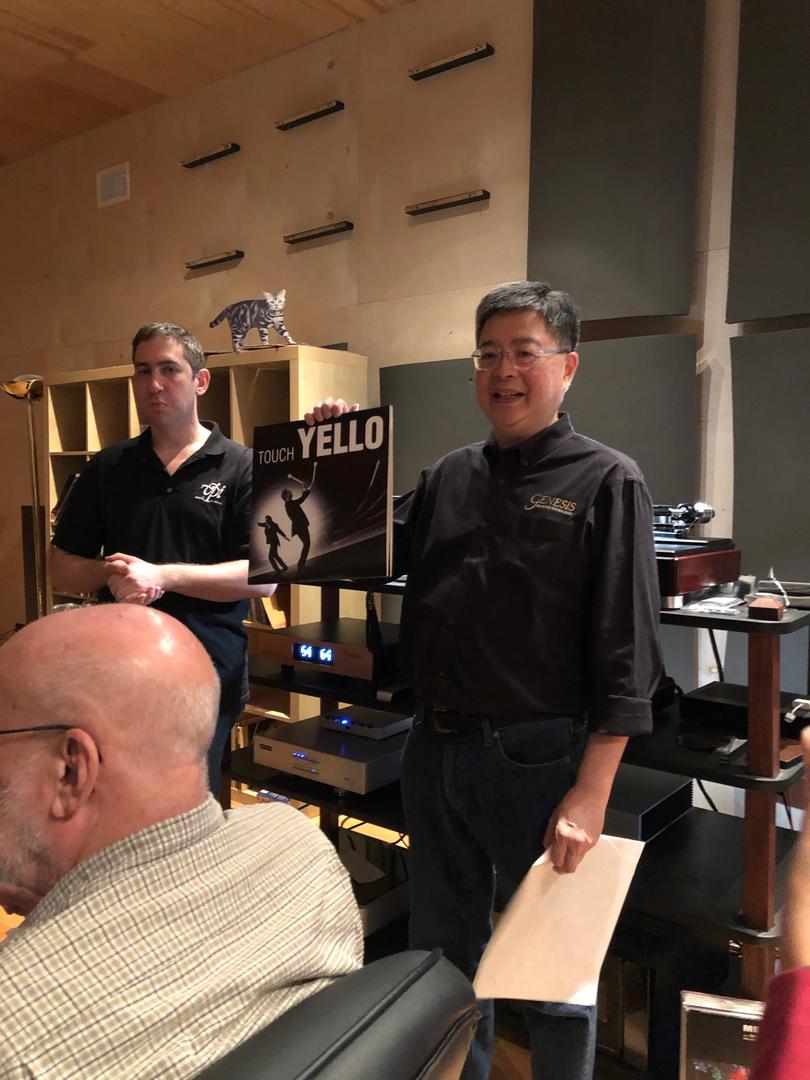 I had the opportunity to ask Gary why his smallest speaker is a completely different design than the rest of the family. He taught me that a proper line array needs to be either half the distance from floor to ceiling or the entire distance, and that anything shorter simply won’t sound right. So his smallest ribbon speaker is a half-height line array, and it will overpower a room smaller than 18* x 30*. He needed a speaker for smaller rooms, and the Maestro is that speaker. I can say with confidence that although it may exist to satisfy small rooms, the Maestro had no problem filling Larry’s 22* x 30* space at concert-level volumes with no signs of distortion, room overload, bloat, or shout.

Larry, Merrill, Gary, our friend Mike, and I ended the evening with burgers at The Iron Horse in Westwood. I hadn’t been there in almost 30 years and my burger coated with teriyaki sauce, Swiss cheese, and a slice of pineapple tasted just as good as it did when I was a kid. (Did I mention I grew up one town over from where this magical evening took place?) 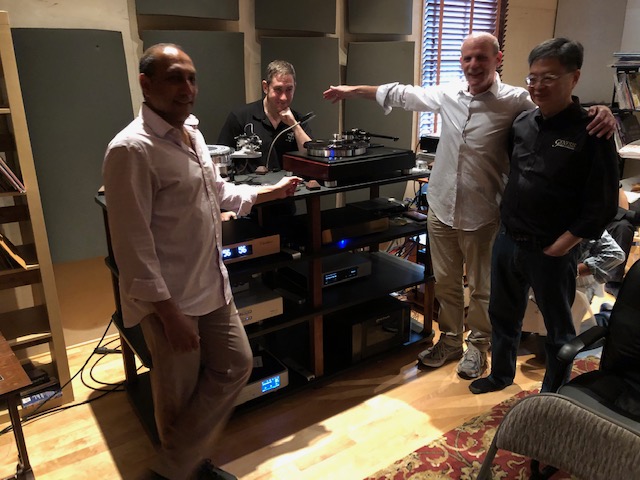 This was easily one of the top five systems I have ever heard. Great music (I ordered five new albums). Great guys. A new friend. And a burger that brought me back to my childhood. What a day!