It’s often said that less is more in the pursuit of high performance. Take race cars, for example: Weight is the enemy and anything that slows the car down is immediately tossed back into the parts bin (except for the seatbelts). Engineers know that lightness equates to speed, and speed spells victory on the track. This same philosophy finds application in the world of loudspeaker drivers. Case in point, Focal’s latest cones that recently debuted aboard its newest Aria loudspeaker series.

Focal of France is already well known for the sophisticated and virtually hand-built “sandwich” composite cones that bedeck its premium line of Utopia III speakers. These “W” diaphragms combine high internal damping and rigidity with the speed and lightness that Focal engineers demand. How to duplicate this level of performance on a broader scale and spread these qualities among a wider range of models was the challenge for Focal R&D. After five years or so, Focal found the Holy Grail in its own backyard. As if reflecting the intensity of the effort, it’s a four-letter f-word: flax. (You were thinking something else?) Before delving into the facts about flax and the resultant F-cone, an introduction to the Aria Series is in order.

Just the Flax, Ma’am
The Aria line comprises five models—three floorstanders, the 906 stand-mount reviewed here, plus a center channel. A side/ rear surround and a subwoofer will join the team this spring. The Aria Series replaces Focal’s popular Chorus 800V and 800W.

The $1499 906 reviewed here is the lone two-way compact in the Aria line. It uses a bass-reflex enclosure with a front-firing port. Its tweeter is an aluminum/magnesium dome that uses a Poron suspension (a cellular urethane foam) derived from the Utopia’s beryllium tweeter. It’s touted as a material with great damping qualities and shape memory, in that it maintains its original contours over time. Additionally the tweeter is set in a shallow ovular waveguide meant to promote even off-axis response. The mid/bass driver is a 6.5″ F-cone (this is where the flax comes in). The crossover frequency is 2.8kHz. The 89.5dB sensitivity and 8-ohm impedance make it an easy-to-drive loudspeaker for any competent amplifier. 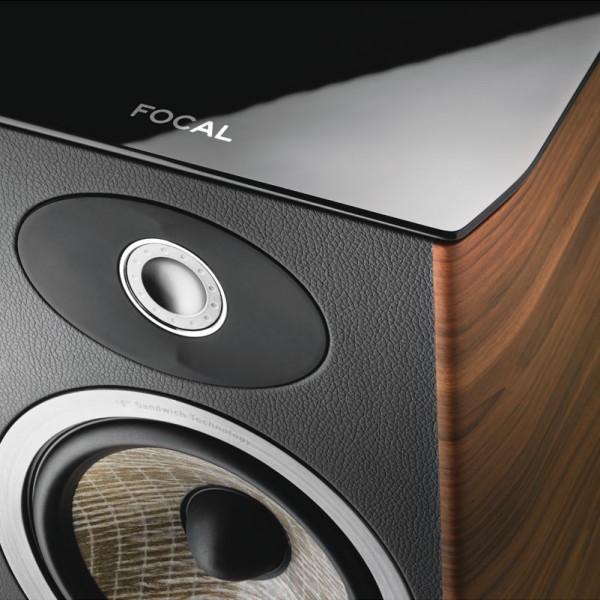 Focal has also applied the less-is-more philosophy to the visual design of the Aria. Compared with the busy, neo-Deco profile of the Chorus range, the Aria appears elegantly understated with a gloss-black glass top plate, a leather-like covering on the front baffle, and brushed gunmetal trim rings accenting the drivers. Surfaces are clean with no visible screws, plus the grilles attach magnetically. The Aria enclosure is a combination of high-density fiberboard of varying thicknesses (between 18mm and 25mm). Sidewalls are non-parallel although not radically so. The standard finish is walnut, but the 906 is also available in a dramatic gloss-black at no additional cost.

So why flax? For one, this natural fiber is all French—never a bad place to start for a Lyon-based company. France is actually the main cultivator in Europe of flax fiber—principally in Flanders, Picardy, Normandy, and the Pas-de-Calais regions—and its flax is considered the best in the world. As cone material goes, flax fibers are advantageous in that they are hollow and weigh in at roughly half the mass of a comparable amount of fiberglass. Focal’s researchers also liked its rigidity and high internal damping characteristics. The finished F-cones are composed of a flax-fiber core enclosed in two thin layers of glass fiber, a sandwich construction not unlike that of Focal’s exclusive W and K2 cones. Focal also points out that playing a role in the F-cone development were certain global realities—some economic and some environmental—including the fact that the costs of synthetic fibers or foams which originate from petrochemical resources are impacted by escalating crude oil prices, making an organic or ecological textile like flax more price competitive.

The Flax of the Matter
Obviously loudspeakers are much more than just cone material, so I won’t pretend that I could isolate the F-cone’s unique attributes from everything else happening within the 906. But one thing is certain: There is a whole lot of music going on here. The speaker’s sonic character is vivid, fast, vibrant, and dynamically engaging. Befitting its size and bones, its output reflects a slightly lighter overall cast, but thanks to an impressive and pacey midbass the speaker always feels grounded. Bass response is excellent for this class—defined and controlled, reliably extending into the fifty-cycle range, as advertised, with a quick roll-off from there.

But central to its performance is its irresistible midrange body, which lends the 15″ tall 906 a nicely weighted tonal balance and dynamic composure. At moderate levels its imaging is well focused, and the spread of a soundstage is broad and unbroken. Even when called upon to reproduce full-range orchestral music like the double-string orchestra of Vaughan Williams’ Fantasia on a Theme by Thomas Tallis, the 906 has enough heft and energy in the lower mids and below to impart genuine timbral authority and soundstage scale. Outside of string sections, other instruments that routinely stir things up in the lower middle octaves are piano, woodwinds like bassoon, and heavy brass along the lines of tuba and trombone. The 906 captures the tonal and resonant densities of these instruments like few speakers in this class have before.

Not that the 906 doesn’t have limits, for as composed as the 906 is, a full representation of the resonant, venue-enveloping body of these instruments is a little beyond this compact’s abilities, but the Aria 906 gets you comfortably in the ballpark. Impressive too is the relative quiet, though not entirely invisible, way in which the enclosure/port goes about its business. Focal has done its homework keeping port noise low and low-frequency rhythmic action and pace high.

As for vocals, I’ll make no bones about it—they are the crucible upon which I judge a compact loudspeaker. A veritable deal-breaker. To reproduce a voice naturally, the tweeter and midbass need to cohere as one—anything that implies a bias of one driver over another or any disparities due to material colorations completely break the spell. Thus, I expect the speaker to reproduce music with a single continuous voice. As I listened to a variety of vocalists, a pure coloratura soprano like Anne Netrebko, the deeper golden luster of mezzo Renée Fleming, or the smoldering jazz-inflected artistry of Holly Cole, there was a lively and harmonious of-a-piece quality to the output of the 906 drivers. Even as singers moved between vocal registers the character, speed, and color of the sound didn’t shift as it often does with cones and metal tweeters. I think this trait in and of itself was validation of Focal’s faith in flax. Judged on an absolute basis, I felt that a smidge of chest resonance was often missing with a bass-baritone like Bryn Terfel and that a soprano’s top register sometimes indicated a hint of dryness in the Aria tweeter. However, in the grand scheme of things these were minor and unobtrusive issues.

While its relative tonal neutrality is important, the key virtues that set the 906 apart are its wide micro-and macro-dynamic envelope and quick transient attack. This is the engine of its performance, the spark that separates the authentic from the canned. It gives the 906 a commanding presence as well as a tender intimacy on tracks like “The Moon is a Harsh Mistress,” where Charlie Haden’s acoustic bass was rich and extended and Pat Metheny’s guitar playing had an ideal combination of warmth, articulation, and harmonic bloom. As I listened to Peter Gabriel’s remake of “Mercy Street” from New Blood, I found the bass viols to be nicely weighted and appropriately moody. The transient energy from the percussion section all the way down to a distant triangle was smooth and swift. I’ve heard these same cues sound a bit tighter or more transparent on costlier compacts like the ATC SCM19 (review to come)—a little sonic wool lightly attaches around some bass resonances on the 906— but the speaker never loses sight of the fact that an acoustic bass is a resonant wooden instrument. On another pop example, I can’t say enough about the rush of excitement I felt listening to Jerry Marotta’s inventive percussion expositions during Marc Cohn’s playful “29 Ways.” The explosive textures and tonal colors the 906 extracted from this recording were exhilarating.

My quibbles are minor. The upper mids/lower treble range loses some intensity, which can be heard as a softening of orchestral presence, with violin sections receding into the greater body of the orchestra, and interior images and inner detail growing a bit more ephemeral. And though the 906 can’t quite physically manifest the full sub-harmonic body of bass instruments, there is still a notable amount of air and dimension.

With the debut of Aria, Focal has unleashed a powerful and persuasive range ready to go head-to-head with the likes of Sonus faber, Revel, KEF, and other notables. As compacts go, the 906 touches all the right sonic bases for me. But more than that, these factors all dovetail into a single conclusion—that time and again, the Aria 906 just gets music right and at fifteen-hundred bucks, does so for a song. And true to its name, that’s a lot to sing about.