For more than fifteen years, First Watt has served as Nelson Pass’ creative playground, allowing him to explore unusual low-power designs with an emphasis on sound quality. Most of these designs don’t rank high in terms of commercial appeal. As Nelson puts it, “First Watt is not for most people. If you have efficient loudspeakers, listen at reasonable levels, and are obsessed about subjective performance, then you probably have come to the right place.” The thing about low-power amps is that they make it possible to use simple Class A circuits with a low parts count. That almost perforce produces an excellent first watt. High-power amps, on the other hand, require multiple gain stages and lots of output devices, and in the process lose sight of that critical first watt. In contrast, First Watt designs generally don’t exceed a power output of 25Wpc into an 8-ohm load. This is the realm occupied by single-ended and purist push-pull designs. By my estimate, with the release of the F7, the First Watt portfolio now totals 17 products. By any measure, that’s quite a remarkable creative spurt.

The F7 is intended as an improved version of the popular F5, a 25Wpc stereo push-pull Class A amplifier. It’s a two-stage complementary affair using JFETs at the input and MOSFETs at the output. I don’t have any experience with the F5, but I’ll accept Nelson’s assessment of its sound: “The F5 was noted for detail and neutrality, the result of simple Class A operation, wide bandwidth, and a generous amount of negative feedback. With some material and equipment, the sound was exquisite, but the amplifier also tended to highlight the faults of recordings and the rest of the system. A poorly engineered record, a second-rate DAC, or peaky loudspeakers and the amplifier was merciless.” His goals for the F7 were primarily better sound and an even simpler circuit. He says that simpler circuits tend to sound better, but since he builds these amps himself, he confides with a touch of humor that his motivation may have included cheapness and laziness. He envisioned a circuit with only four transistors and four resistors—the bare minimum for a push-pull amplifier.

After tweaking the new circuit for many months, he decided to build a small pilot run in advance of product release. Being the beneficiary of a sample of the early-version F7 and living with it for a while, I could readily agree with Nelson’s bottom line that this was a “nice amplifier.” But in my system, driving my DIY Basszilla Platinum Edition Mk2 loudspeaker, it didn’t measure up to the single-ended F3. Most notably I found it to be lacking in transient control and authority. It simply failed to light a fire under the soundstage. Nelson realized that he still wasn’t satisfied with the sound and so continued to experiment, initially without much luck. And so, he says he, “broke the glass on the wall box labeled ‘DESIGN EMERGENCY.’ Inside was a single resistor labeled ‘DANGER: POSITIVE FEEDBACK.’ I went back to the previous circuit. And I put that resistor in the amplifier.” The damping factor, which was 5 or 6 for the early circuit, was now about 100 by virtue of the positive feedback applied. The power supply was also improved. Nelson doubled the power-supply capacitance and says that he found a clever way to further reduce the effect of high-frequency DAC noise and environmental RF. 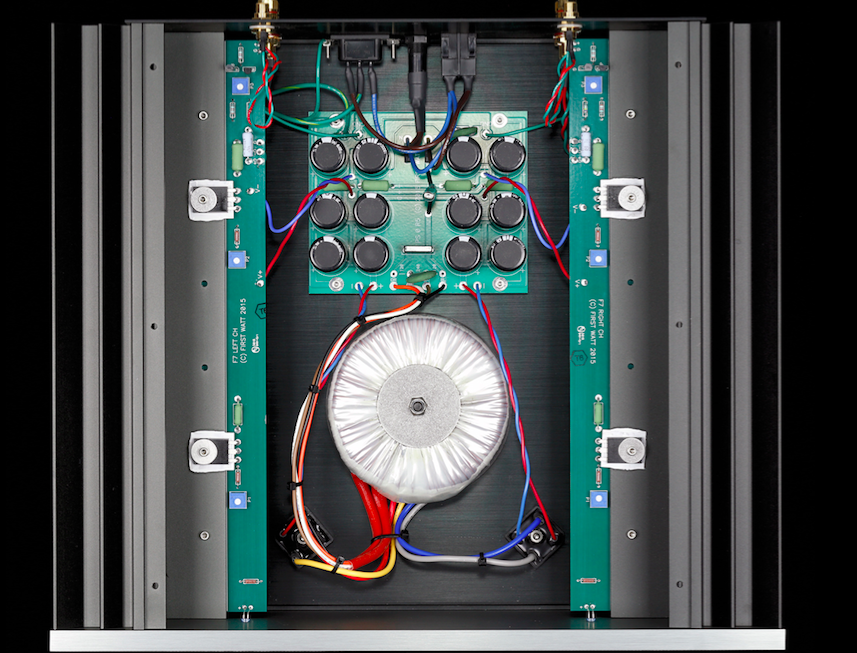 What is positive current feedback, you ask? Well, a percentage of the output current is fed back in phase with the input so it increases gain but also increases distortion. The final version of the F7 balances a modest amount of negative feedback (14dB) against a bit of positive current feedback (about 2dB) to nudge the output impedance toward zero. It should be kept in mind that the net feedback applied to the F7 is never positive but simply “less negative.” Since the damping factor is normally referenced to an 8-ohm load, a source impedance of 0.08 ohms gives a damping factor of 100. Of course, the same result could have been achieved with a ton of negative feedback. Not only would that have been suboptimal from a sonic standpoint, but the need for additional open-loop gain would have necessitated an additional gain stage. The F7’s “tango” of negative and positive feedback represents a much more elegant solution, which yields a damping factor of 100 in the context of a simple circuit. You might get the impression that a source impedance of zero would be even better since it gives an infinite damping factor, but that isn’t something that is either necessary or even desirable. In the real world, the speaker cable resistance is in series with the amplifier’s source impedance and can dominate the effective damping factor. For example, if a speaker cable with an impedance of 1 ohm were to be used with the F7, the damping factor would drop from 100 to 8.

The F7 should disabuse you of the notion that the ideal amplifier emulates a “straight wire with gain.” That old cliché was probably coined by an electronics engineer whose measurement load consisted of a resistor. In that case, damping factor isn’t a critical parameter. However, real-world loudspeakers represent reactive loads with wild impedance variations, sometimes exceeding an order of magnitude, and the amp’s source impedance directly impacts the loudspeaker’s frequency response. The only way to preserve the neutrality of the amp/speaker interface is to design an amplifier with a high damping factor (i.e., low source impedance).

The sonic payoff of a low internal source impedance amplifier, at least for most conventional speakers, is improved transient and frequency response. This is most noticeable in the bass range. A simple test should make a believer out of you. With the F7 powered off, put your ears next to your loudspeaker’s woofer cone and tap it gently with a finger. Next, turn on the F7 without any music input and tap the cone again. You should notice a distinct reduction in the resonant character of the cone. What is happening is that the F7 is short-circuiting the back EMF of the woofer, thus putting the brakes on cone motion. I should hasten to add that some speakers do benefit from higher source impedance and that was the basis for variable damping amplifiers, a hot topic in the 1950s. However, in the October 1956 issue of Radio-Electronics none other than Paul Klipsch advocated for disabling the variable damping feature, which he claimed resulted in the best sound with the Klipschorn and Shorthorn. In his own words: “Put another way, any adjustment of the damping other than for a reasonably low internal impedance of the amplifier has deteriorated the overall response.” He also warned against use of excessive negative feedback, which inevitably leads to instability

What makes the F7 so special is its inherent textural sweetness and warm tonality. There are many (too many?) solid-state amps out there that manage to sound smooth and refined yet lack the organic character of live music. The F7, on the other hand, managed to sail through reproduction of violin tone with superb upper-register sheen and transient finesse—a rare feat for any solid-state amplifier. Having been raised on tube sound, I find textural warmth to be a most welcome attribute, though the F7 does not approach the effusive warmth of a classic tube amp. If you crave even more warmth, do as I do and hook the F7 up with a tube preamp. This is not a euphonic amplifier. Relative to say, a Marantz 8B, the F7 delivers far more incisive transients while its command of space is competitive with the sort of 3-D spatial presentation tube amps excel in. The total harmonic distortion has been trimmed to 0.05% at 1 watt. But Nelson points to the distortion spectrum at 1 watt and 1kHz, and the 10dB ratio between the second and third harmonic as being contributing factors to the F7’s musicality.

Since just about all pop music is being recorded in a studio and mixed on a multitrack console, sound engineers are given the opportunity to play various games with the final mix, which may include vocal overdubs, canned reverb for individual tracks, pan-potting, eq, flanging, gain riding, and compression. The F7 was able to dig deep into a mix and resolve such trickery without much effort, a tribute to its superb transient control and laser-sharp image focus. The Eximus DP-1 DAC makes it possible to upsample a Red Book 44.1kHz input to 192kHz on the fly. Discerning a sonic change with some amps is not an easy task. That was not the case with the F7 in the chain. It highlighted significant sonic changes, the opening up of the treble range and tightening of image focus being two major ones. There’s no doubt in my mind that this amp is a high-resolution device.

I spent some time pitting the F7 against the F3. While the F3 sounded a bit cleaner, the F7 was better controlled in the bass range and displayed more personality. To confess, the F7’s warmer, slightly lusher textures suited me just fine. I have to disappoint those of you who expected the F7 to go down in flames. Much to my surprise, I ended up preferring it over the F3. Make no mistake about it, the F3 a terrific single-ended amplifier. It’s just that the F7 is the more seductive of the two, just as dynamic, and ultimately a more musical performer. And that’s a remarkable finding for any push-pull amp.

The F7 is easy to embrace musically. Its sound is sufficiently addictive that I’m finding it extremely difficult to evict it from the reference system. For the record, it’s likely to stay put for many weeks to come. If the F5 can be said to offer a “half-nelson” grip on sound quality, it would be accurate to characterize the F7’s performance as nothing less than a “full-nelson.” Simply put: one of the best low-power amps money can buy.