Early this year I wrote a blog about iFi Audio’s iCAN nano headphone amplifier (click here to read), but mentioned at the time that my findings were based on a pilot production sample and not on a full production unit. iFi felt the product units would sound even better than the pilot production model had and they were also keen for me to hear what the iCAN nano could do in conjunction with their brand new iDSD nano DAC/headphone amp. Well, the production units just arrived on my desk a few days ago, meaning a follow-up blog was in order.
__________ 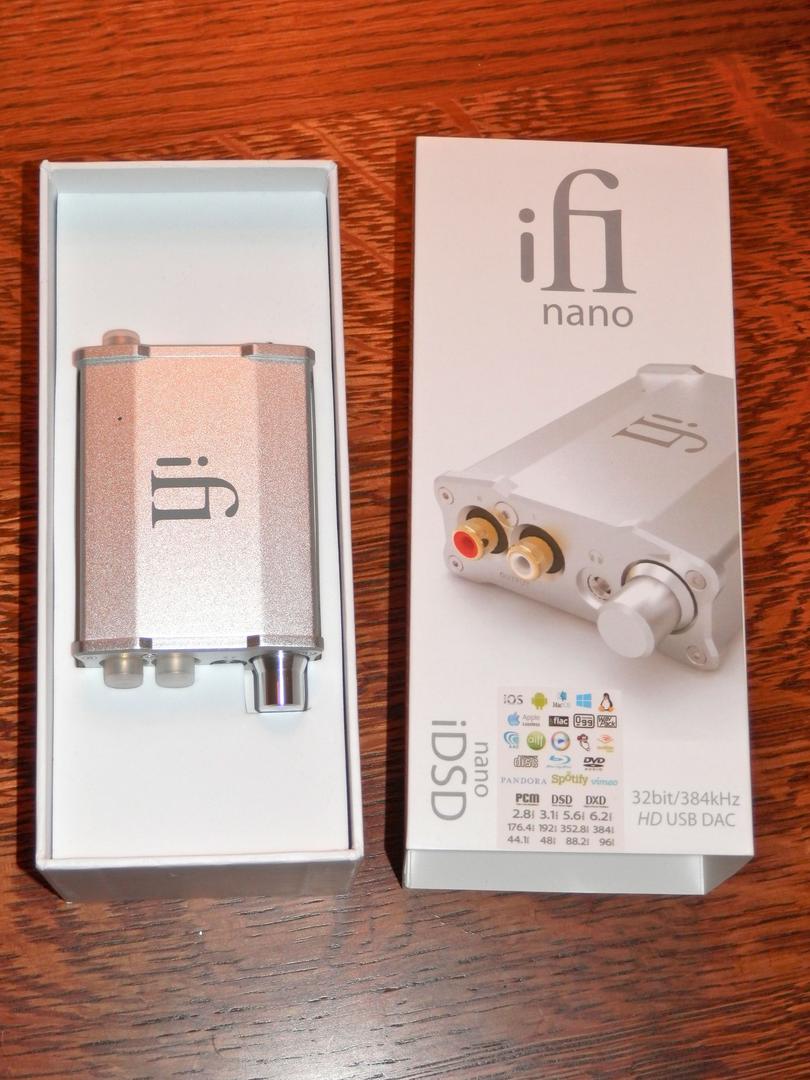 About the iDSD nano

iFi’s iDSD nano is a compact, portable high resolution DAC that is priced at $189 (US) or £165 (UK) and that can decode a stunning array of high-resolution digital audio file formats, including:

* As many of you know, DSD (or Direct Stream Digital) uses 1-bit files, but with exceedingly high sampling rates, as is apparent above. 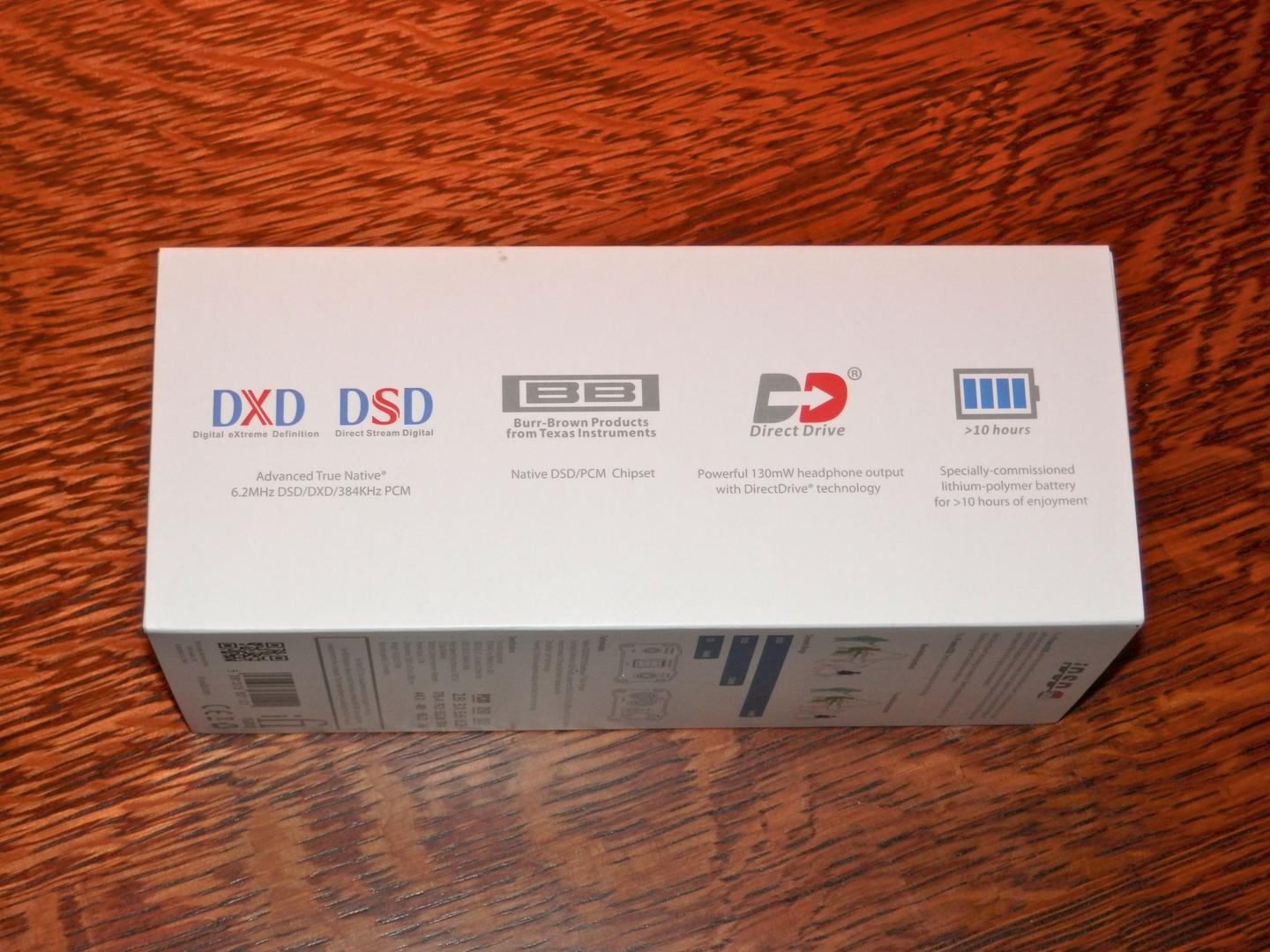 From a purely technical perspective, highlights of the iDSD nano include:

·      Use of a “Native DSD/DXD/PCM BurrBrown DAC chipset,
·      Support for all of the formats listed above via “High Definition USB Audio”,
·      Support for Asynchronous USB and what iFi terms “Bit-Perfect” file transfers,
·      Use of iFi’s proprietary ZeroJitter Lite​ technology,
·      Outputs: A coaxial S/PDIF digital audio output, plus two stereo analogue audio outputs via a pair of RCA jacks and the 3.5mm stereo mini-jack,
·      Controls: A rotary on/off switch and volume control, plus a mini-toggle switch for selecting either “Standard” or “Minimum Phase” digital filer settings, and
·      A built-in headphone amplifier that features iFi’s DirectDrive technology and that offers claimed power output of 130mW. 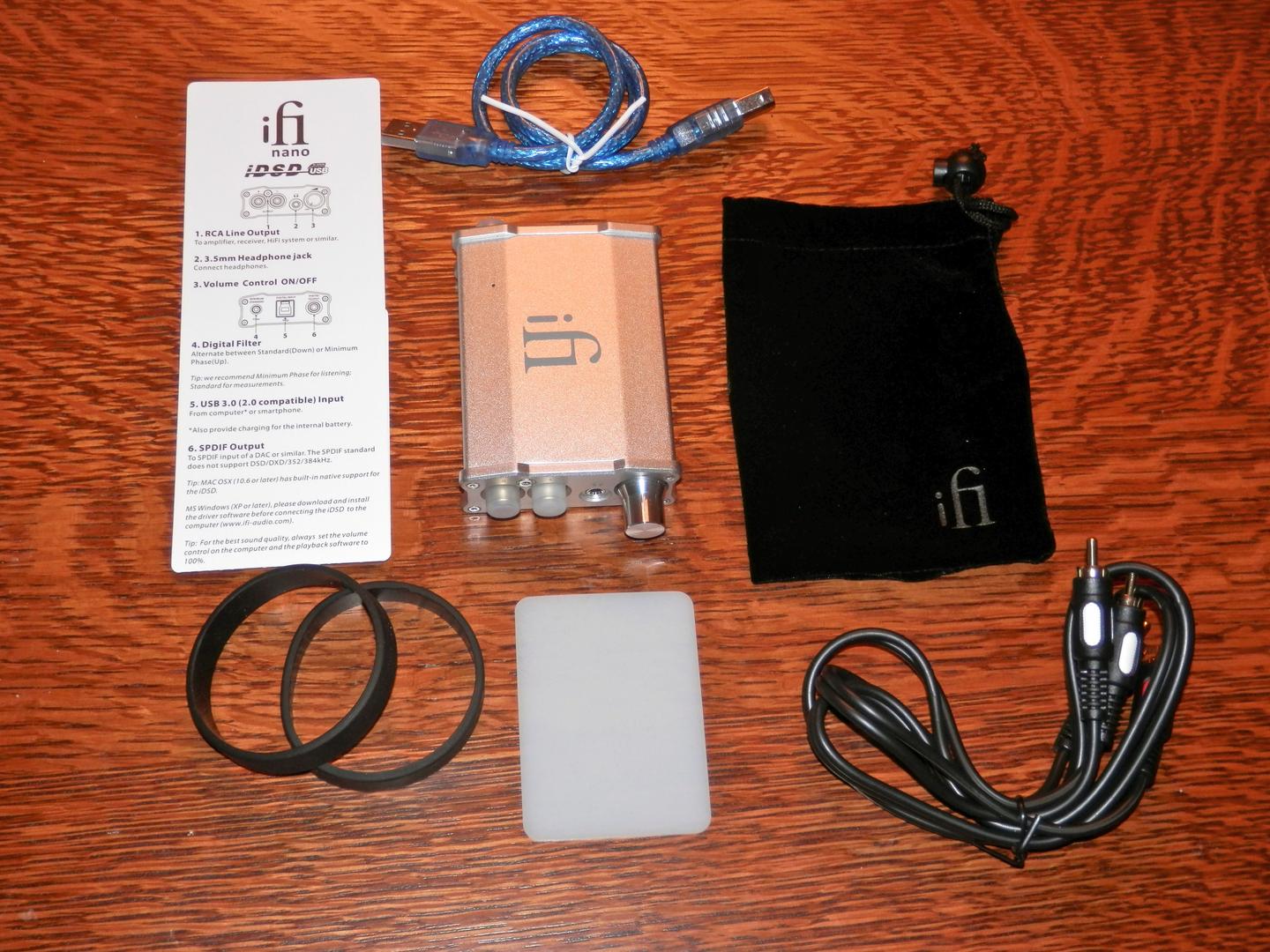 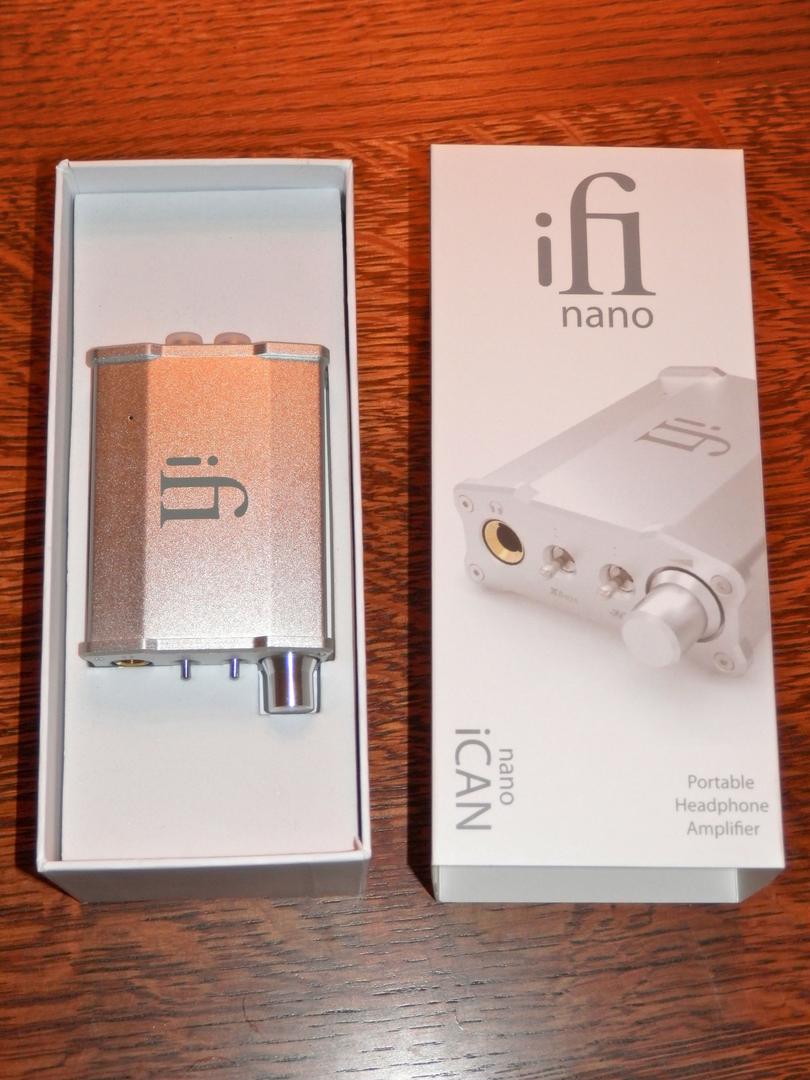 About the iCAN nano

iFi’s iCAN nano is a compact (same size as the iDSD), portable headphone amplifier that is priced at $179 (US) or £149 (UK) and that is designed to capture many of the sonic benefits of iFi’s larger iCAN micro desktop headphone amplifier (click here to see the Hi-Fi+ review), but in a smaller, lower cost, and of course portable format. 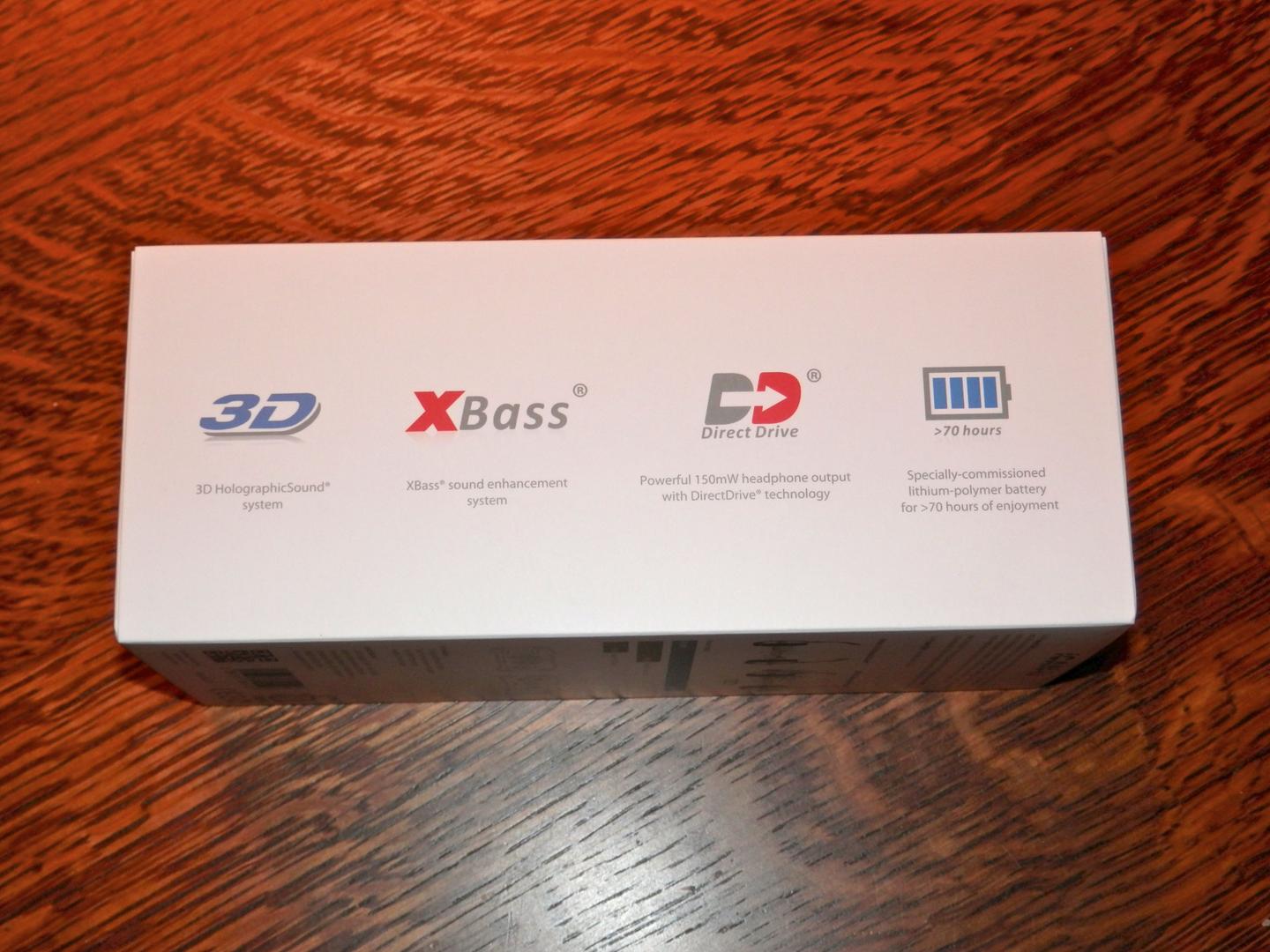 Technical highlights of the iCAN nano include:

·      An amplifier circuit inspired by the larger iCAN that employ’s iFi’s DirectDrive circuitry (where there are no output coupling capacitors) and that puts out 150mW of power,
·      A switch-selectable version of iFi’s 3D HolographicSound circuit that is not, please note, a so-called crossfeed circuit, but rather uses a proprietary design said to place “the recording back outside of the (user’s) head…”,
·      A switch-selectable version of iFi’s XBass circuit that allows users to dial-in a judicious touch of low-frequency bass reinforcement for headphones or earphones that can benefit from a touch of very low-end boost,
·      A beefy 1400mAh Lithium-polymer battery said to be good for more than 70 hours (!) of continuous operation, and
·      Useful inputs and outputs, including: two stereo analogue audio inputs (via stereo RCA jacks and a stereo 3.5mm mini-jack), and one master analogy audio output (via a 6.5mm stereo TRS or “phone-type” jack), enhanced by the fact that the iCAN comes with a nicely made, gold-plated 6.5mm-jack-to-3.5mm-jack adapter. 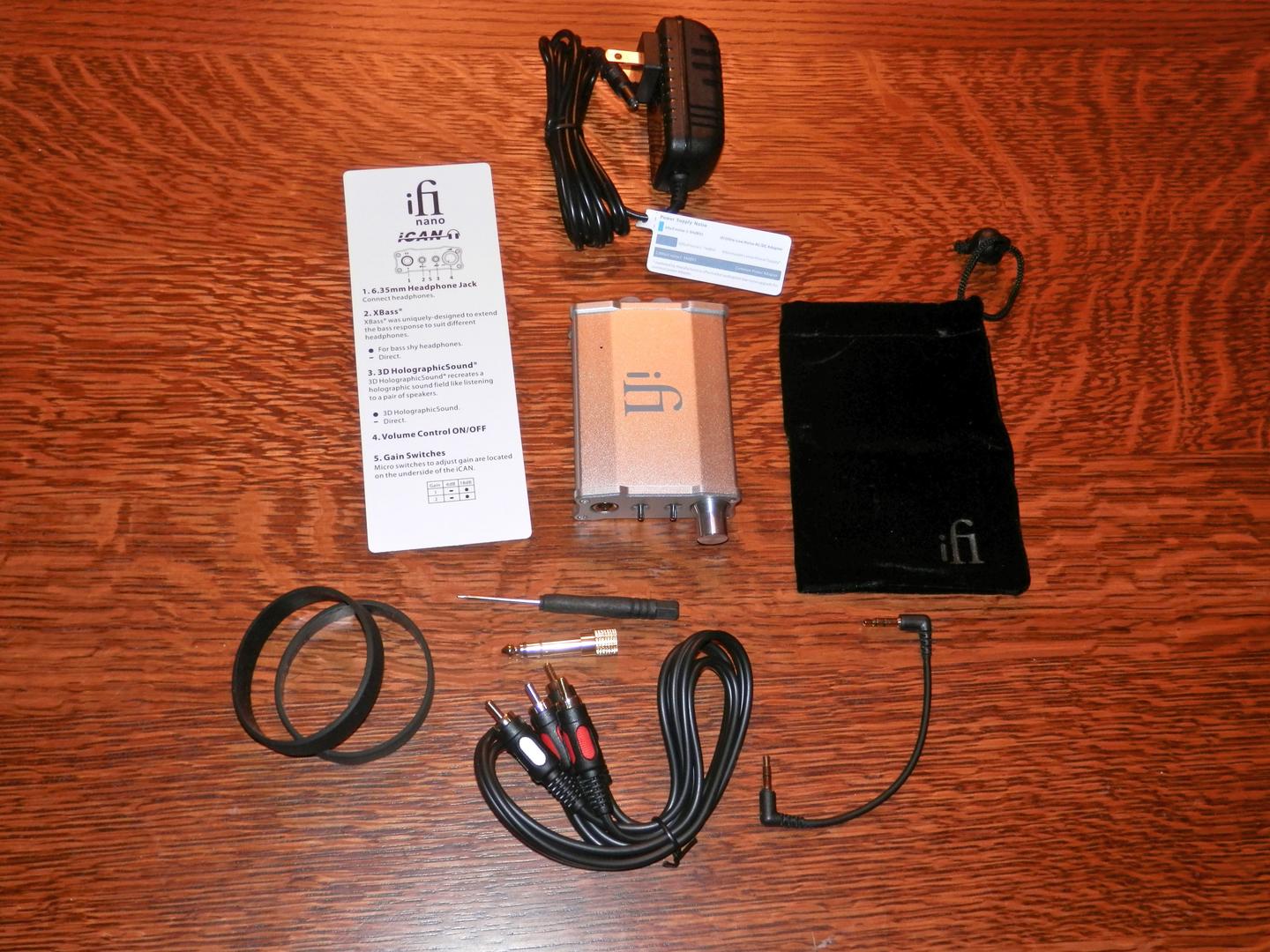 What Have We Learned About the Sound of the ICAN Nano Thus Far?

If you happened to read my earlier blog on the pilot production iCAN nano (click here to read), then please know that the full production model is at least as good as the earlier sample was (though I have not yet been able to compare the two units side by side to see if there is much, if any, difference between them). As before, the iCAN nano has left me wowed by both the refinement, robustness, and sheer “feistiness” of its sound; on first listen, it seems to offer quite a lot more output than its modest 150mW output specification would lead you to expect.

If you weren’t able to hold the compact device in the palm of you hand (with room left over) and if you judged it purely on sound quality, you might easily think the iCAN was one of today’s nicer desktop headphone amps. Yes, really. 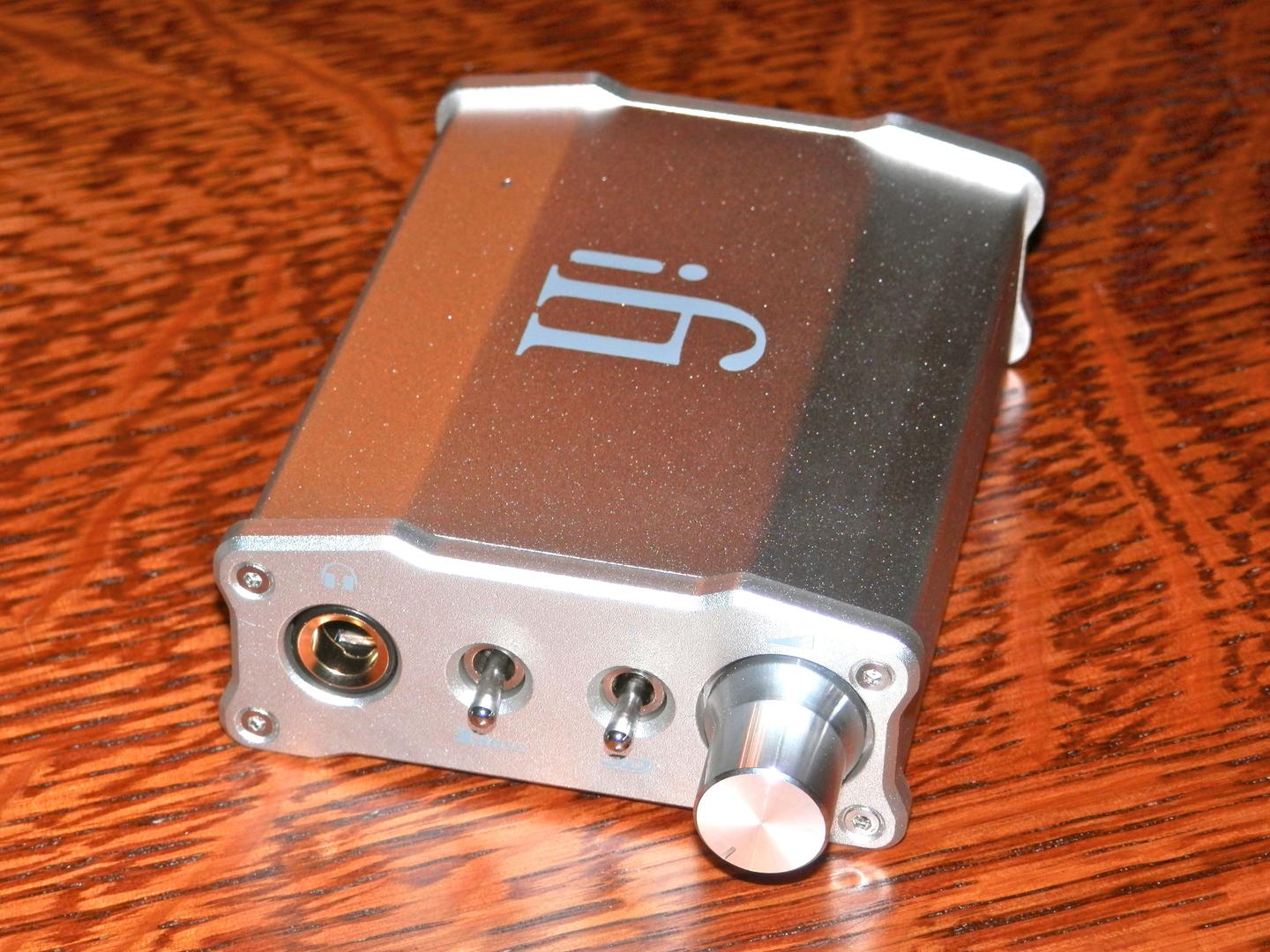 About the only point at which you’ll discern the iCAN’s limitation (and, yes, it does have its limits) will be when you try using the iCAN to drive brutally power-hungry ‘phones such as the HiFiMAN HE-6. Then, things will be fine to a point, but when big dynamic swells or power-slurping heavy-duty bass passages come along you will hear moments when the iCAN nano abruptly and decisively runs out of power and distorts and/or runs into audio clipping. However, use the iCAN nano with headphone loads that fall within its wheelhouse and you’ll be a very happy audiophile indeed.

The Xbass circuit is quite tasteful as such things go, so that with headphones that general sound good but are just a bit bass shy, the Xbass circuit can be just what the doctor ordered. The key is that the Xbass circuit focuses on low bass enhancement without drifting too high upwards into mid-bass territory. 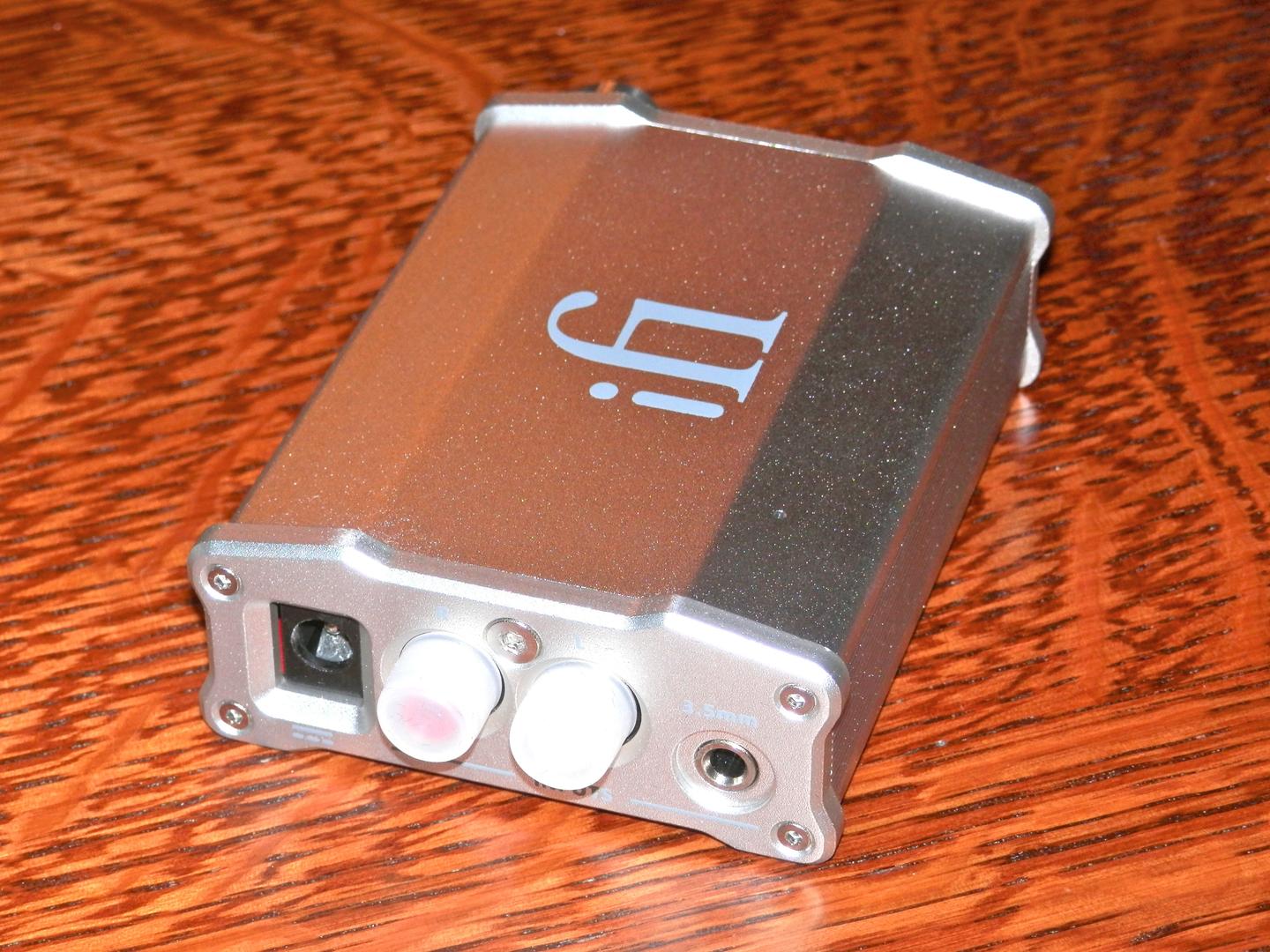 The 3D HolographicSound circuit proved, in my experience, to be both an acquired taste and a feature whose usefulness varied greatly from recording to recording. On some tracks, for instance, flipping the 3D switch might have very little perceived impact while on other the effect could be much more dramatic. Is the 3D HolographicSound circuit a good thing? Well, “good”, in this instance is in the ear of the beholder. I found that I preferred the straight, unenhanced sound of most recordings, while not noting that on a few the 3D circuit seemed a genuine benefit. Your mileage, as they say, may vary. Try the circuit for yourself and see what you think.
__________

What have we learned about the sound of the iDSD nano thus far?

Let me just jump right in and say that the iDSD nano sounds ridiculously good for the money—more than competitive with other portable DACs I’ve heard thus far (though I have not yet tried any of Light Harmonic’s new portables, which promise stiff competition).  Still, even the least costly of the LH models will costs more than the iDSD nano, meaning the iFi unit has the playing field more or less to itself at its price point.

This little DAC delivers a very full measure of what I am coming to regard as the iFi (and thus, by extension, the Abbingdon Music Research) sound, whose virtues include generous amounts of resolution, a quiet and full-bodied presentation, and an aura of all-around refinement and sophistication reminiscent of what you might expect from (far) more costly gear.

In operation within my Windows 8/JRiver Media Center 19-based system, the iDSD switched very comfortably and seamlessly betwixt various resolution levels of PCM files, though it did exhibit a few minor (albeit easily correctable) glitches when transitioning from PCM to DSD format files. But the sound, both on high-res PCM and on DSD material, was just amazingly good for the amount of money this unit costs. Forgetting the fact that the iDSD nano incorporates a headphone amplifier for a moment, my take on things would be that it is well worth considering even if you purchase it solely for use as a DAC. 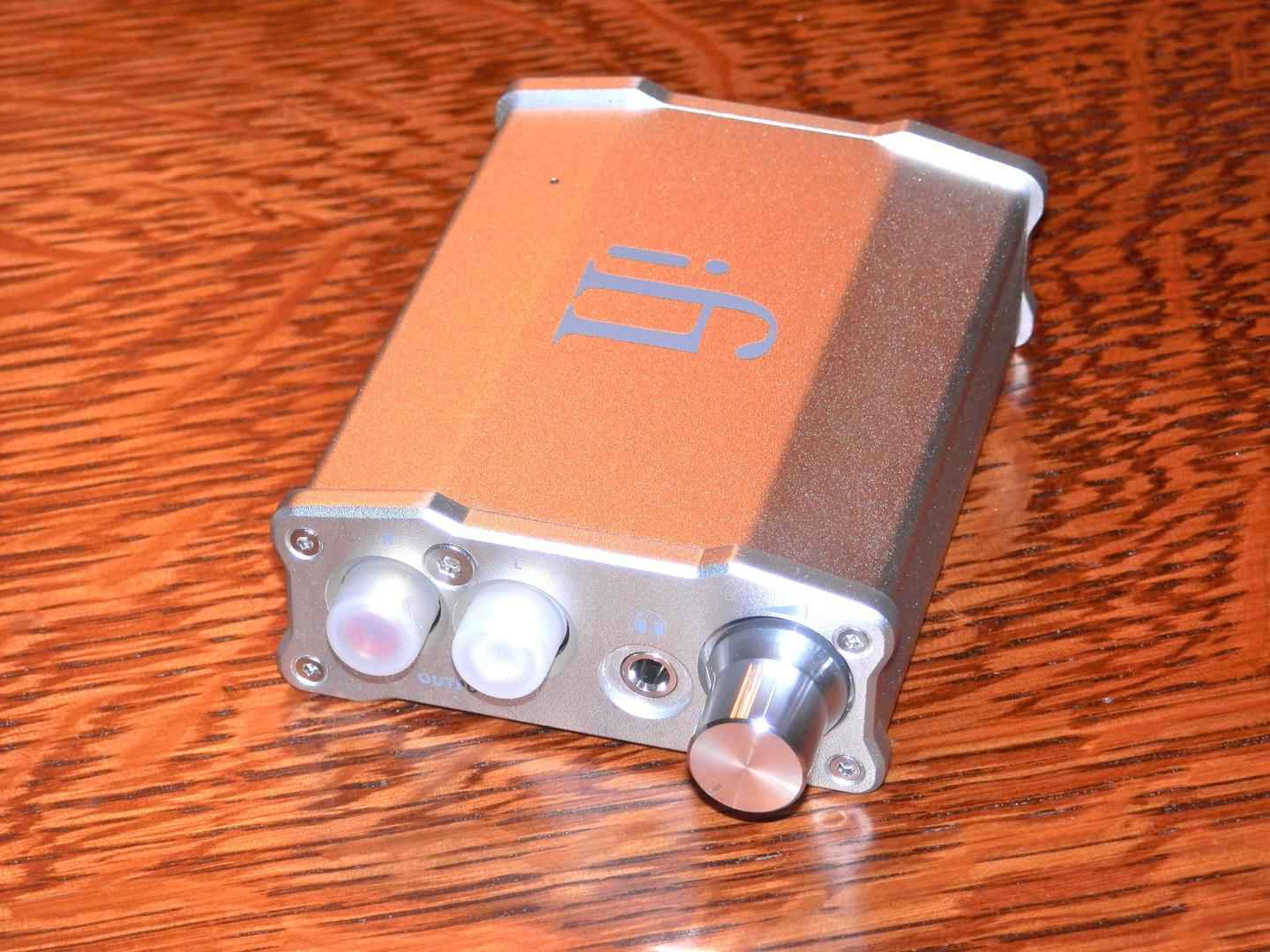 But let’s pause for a moment to consider the iDSD nano’s headphone amplifier circuit. The amp, to a point, exhibits sound quality similar in general tone and tenor to that of the iCAN nano (or, for that matter, the bigger iCAN micro), though of course the iDSD has had to forego the iCAN nano’s Xbass and 3D HolographicSound circuits (hey, something had to go overboard in order to hold the price comfortably below $200).

Given that the claimed power output specifications for the iDSD nano (130mW) and the iCAN nano (150mW) are similar, you might expect them to sound equally dynamic and robust, but in practice I found that not to be the case. A few evenings ago I tried the iDSD nano with a battery of headphones including the Fischer Audio FA-002W High Edition, the HiFiMAN HE-500, and the Audeze LCD-3, comparing the sound of the iDSD nano used as a standalone product vs. the sound of the iDSD nano used in conjunction with the iCAN nano. In every single instance, the overall sound quality and dynamic characteristics were markedly better when the two units were used together.  Here’s a rough summary of my listening notes from that session.

IDSD nano with the HiFiMAN HE-500:

·      Generally a warmer, more organic, and more natural sound than the Fisher, though the HE-500 is certain no less details,
·      Less overtly midrange-forward sound than the Fischer,
·      Again, iDSD nano has insufficient output for the HE-500, however
·      With iCAN nano added to the system I noted, “Sound is dramatically better with the iCAN nano in action; the sound becomes more robust with even better midrange and treble resolution, and dramatically more authoritative bass. There’s plenty of gain, too.” 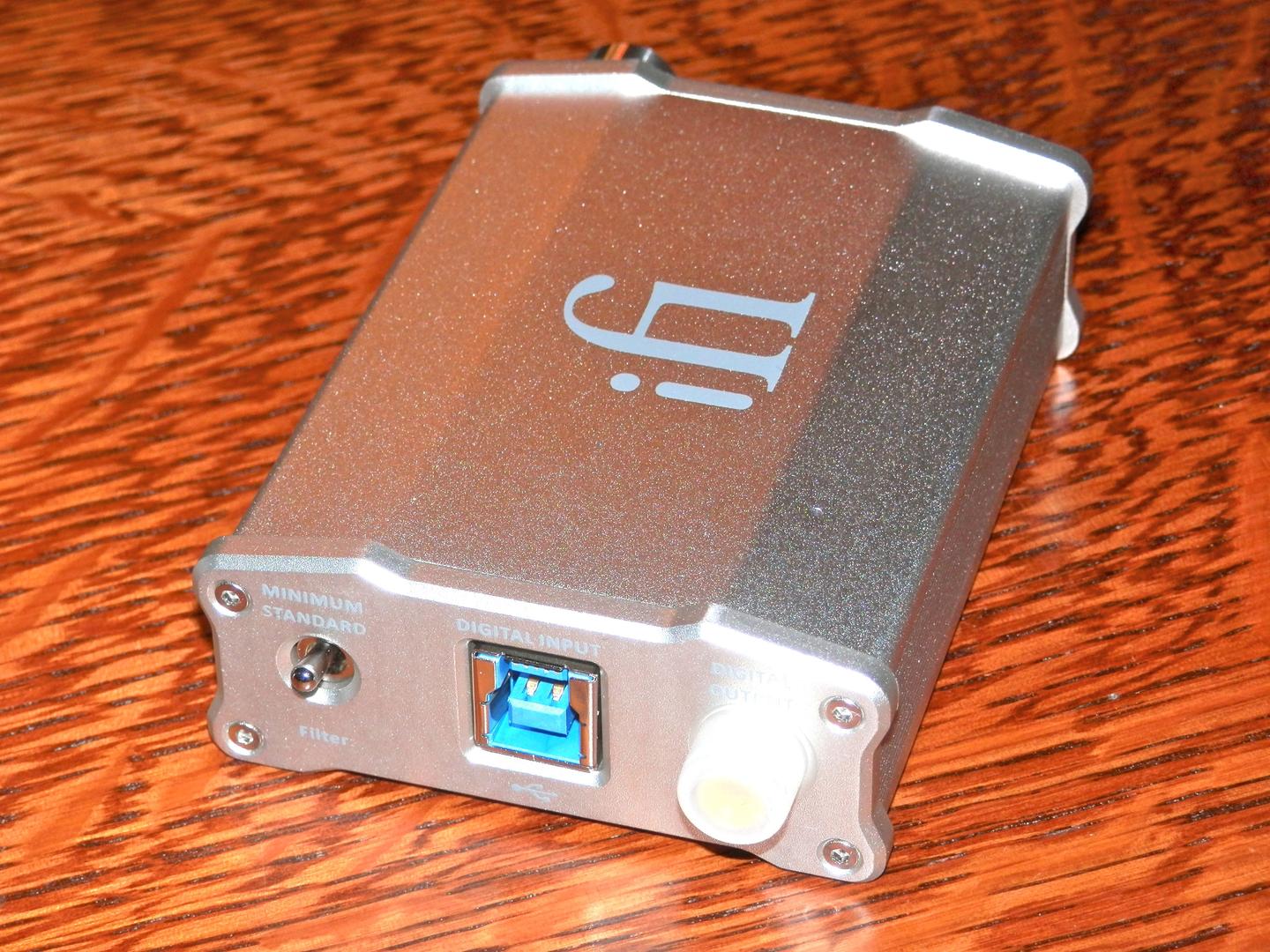 iDSD nano with the Audeze LCD-3:

·      This combination offers the best overall tonal balance and articulacy of these first three ‘phones, and perhaps also the best overall sensitivity,
·      Still the iDSD nano lacks sufficient output (gain?) to fully exploit the LCD-3’s strengths, however
·      With the iCAN nano put into play I wrote, “Not surprisingly, the iCAN nano fixes everything, providing plenty of output and great bass weight.”

The moral of this story, for now, is that while the iDSD nano is a wonderful thing in its own right (it would be terrific for use with earphones, custom-fit in-ear monitors, and higher sensitivity full-size phones), it pays to add the iCAN nano to the mix if you own somewhat more difficult-to-drive full-size ‘phones.

Watch for our upcoming Hi-Fi+ review of the iDSD nano and iCAN nano.  Until then, however, I hope this “First Look” blog will give you some idea of what to expect.