Given the title of this review, you might assume I’m going to focus on the Estelon XB’s shapely figure. And, to be sure, there is that. The XB—like all Estelons—has one of the most sensuous silhouettes on the market. The speaker is all curves and smoothness, rather like, well, the female body that it resembles in a Picasso-esque way. So, yes, the XB exudes an aesthetic that is the antithesis of modern slab speakers.

But the style is not just aesthetic—it’s also musical. Allow me to explain: All good musicians employ techniques such as shading the tone of their instrument or voice, playing with rhythms, and subtly varying dynamics in order to inject tension and repose, melodic line, and expressive tonal color into what would otherwise be a rote series of notes. Truly great musicians—from symphony orchestra conductors to soloists and singers—go even further; they use these elements to stamp their music with a style that is all their own. If an audio component can capture that, it can offer the listener a connection beyond the music to the players themselves. This is what the Estelon XB, under the right circumstances, can do.

When I first began listening to the XB, I didn’t immediately recognize that it possessed this rare ability. My first impression was of enormous resolution, particularly the sort of timbral resolution that makes instruments ring true. A great example is the first track I played, “Rainbow,” from the new Robert Plant album Lullaby and the Ceaseless Roar. I had just auditioned this song on my reference system of CH Precision electronics driving my one-of-a-kind Metaphor 1 speakers, and the main thing I came away thinking was what a lousy recording it was. Then I re-played the track with the CH gear driving the Estelon XB’s—and my eyes bugged out. No, the recording had not miraculously improved, but suddenly the opening drum thwack was tangible rather than a poor facsimile. What accounted for the difference? Certainly the dynamic burst from dead silence, but the illusion was primarily due to the drum’s fleshed-out timbre. 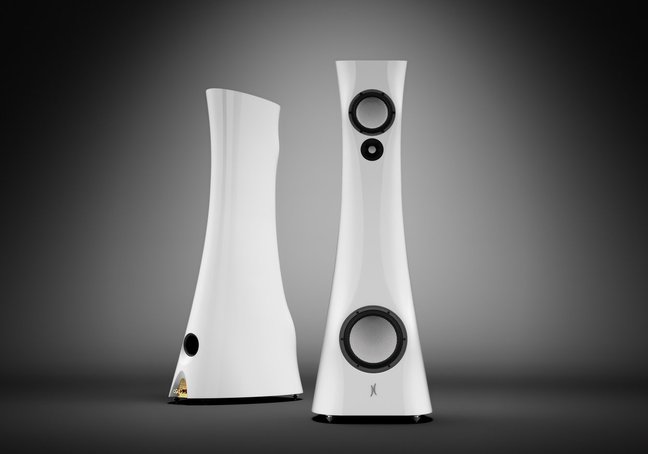 The same proved true for other instruments. Through the XB, the acoustic guitar on “The Dress Looks Nice on You” from Sufjan Stevens’ Seven Swans has an exquisite richness and true-to-life body. The violin and doublebass on the Pentatone SACD of Stravinsky’s l’Histoire du Soldat have individual strings, and the brass has both spit and burnish. On Miles Davis’ Kind of Blue, the upright bass’ hollow cavity and thick strings are palpable.

Soon, though, I began to realize that I was not just hearing a lot of detail; something more was going on. The XB was taking me beyond engagement with the music to engagement with the players themselves. I didn’t grasp this all at once, but over time. The sensation came to a head while I was listening to my go-to jazz CD, Michael Wolff’s 2am. As with other pieces I’d tried through the Estelon, the first thing I noticed was the XB’s sensational timbral richness. Through this speaker, Wolff’s grand piano’s lower registers roll like a bowling ball across the room, while the top keys tinkle and sing. Further, every note in between speaks with the unique voice of its position on the keyboard.

But Wolff goes much further than simply playing his compositions on a gorgeous-sounding piano; he plays them with a unique style. An aggressive use of dynamic contrast has always been an obvious part of that style, one that all but the lamest of systems can convey to some extent. Yet the Estelons showed me something far less obvious: how Wolff uses the more subtle dynamics produced by the way he strikes a key to conjure a specific tone for each note. I could actually hear him modulate each jab or caress to get exactly the desired effect. This is a higher level of insight into the musician’s art than most components are capable of conveying. When it suits him, Wolff also bends time to dramatic effect. This, too, came through, as did the snarl with which Christian McBride played what were previously impersonal walking bass lines. I have listened to this track as a test so often that I rarely go beyond the first minute; it tells me everything I need to know. But the Estelons gave me so much new insight into Wolff and his trio’s playing that I was, for the first time in eons, riveted for the duration.

I have already hinted that there are certain prerequisites to getting the XB to pull off this feat of communion with the musicians. The first is sufficient power. These are not particularly sensitive speakers, as I discovered when playing the aforementioned Stravinsky SACD. This disc is recorded with lots of headroom—always a good thing—so overall volume is on the low side. I’m used to cranking the level up for the first track, but through the Estelons I turned it up to “11” and still the sound level—and more importantly the dynamics—were tepid. Thank goodness for programmable electronics like the CH Precision A1 amps, which let you choose an optimal gain structure for your source components and speakers. I had dialed them back for my very efficient reference speakers, but all I had to do was punch in an extra 3dB of gain and, voîlà!—plenty of volume and dynamic punch. In short, you’ll want to drive the XB with something that has sufficient oomph.

You’ll also want to take steps to minimize the speaker’s sole sonic blemish, lest it get in the way of the music. That blemish is that the Accuton ceramic-dome tweeter can sound hard, even piercing. I suspect some ringing is going on at higher volumes; ringing that I do not—and JV in his review pointedly did not—hear on Estelon’s higher-priced models, which use different Accuton tweeters. Fortunately, proper setup can significantly alleviate the issue. The trick is to use virtually no toe-in. This isn’t a hardship, since the XB requires none to produce stellar imaging. Also, be sure to employ the supplied spikes. They’re not your run-of-the-mill doohickeys, but rather an integral part of the system. They do a commendable job of soothing the highs so you can focus on hearing what and how the musicians are playing.

Although I consider them tertiary to the capabilities I’ve already described, there are other things these Estelons do well that deserve a mention. As noted, imaging is one of them. The whereabouts of players—and the space between them—are impeccably portrayed. On Dave Brubeck’s Time Out, I have never heard the stand-up bass so distinctly positioned from the other instruments. Which brings up the XB’s bass, arguably the best I have heard in my room. Without any placement fuss, the XB delivers low end that’s rich, satisfyingly deep, chock full of tonal information, and tight as a snare drum head.

The Estelon XB is a rare component, capable of connecting you not only to the music but to the minds and hearts of the players and singers behind the music. Thirty-five-thousand, nine hundred dollars is unquestionably a lot of money for a pair of speakers. But how much is that connection worth? Listen to these speakers, properly set up, then decide.