As I learned on my Japanese audio excursion (Issue 279), purity is the country’s overriding sonic goal. But how to achieve it? The answer, of course, varies by price point. With its cost-no-object Grandioso series, Esoteric has sought to eradicate distortions and colorations in two ways: 1) by taking a fresh look at entrenched norms, and 2) by scrutinizing every last design detail—no matter how minute. The result: Even in the rarified uppermost tier of the high end, the Grandioso stack stands out.

Consider the Grandioso D1 DAC—or I should say DACs (plural) because the D1 is actually a pair of monoblock DACs. Unlike virtually every other DAC on the market, the D1 doesn’t inflict upon its stereo channels the noise, crosstalk, and space constraints inherent in sharing a chassis. The two DACs talk to each other via an HDMI connection that enables the pair to act as one stereo DAC. Thus, when you switch the input on the front panel of one, it’s changed for both.

The D1’s dual-monoblock layout is an example of Esoteric’s willingness to rethink an established macro-level design approach. But the Grandioso stack applies the same no-compromise philosophy to the tiniest of details. For example, circuit boards “float” above the chassis, isolated from vibrations. The holes on those boards, through which small parts are mounted, are smoothed on the inside to promote better contact and to prevent corrosion. The solder that fills those holes is an ultra-dense, in-house formulation. Esoteric tested every solder on the market and, after determining that exactly none of them met its standards, decided to mix its own.

And on it goes. The D1 employs AKM’s top DAC chips—sixteen of them—in a technique that smoothes out any irregularities between chips and that also provides a wealth of sheer processing power. Clocking those chips is a custom-designed NHK unit with an oversized crystal for increased stability. The Grandioso P1 disc transport, which also benefits from a stand-alone power supply (bringing the total number of boxes comprising the digital front end to four), employs Esoteric’s rare, top-of-the-line VRDS-VMK-Neo 20S module. The “20” in the model designation refers to the 20mm structural steel plate on which the mechanism is mounted. The P1 and D1s communicate via a pair of HDMI cables, whose high bandwidth is ideal for DSD. And throughout the Grandioso series, Esoteric eschewed the large-but-sluggish capacitors to which many companies default, opting instead for multiple parallels of small, dual-layer, super-high-speed caps.

Esoteric lavished the same intense consideration on the Grandioso series’ aesthetics and operations. Grandioso component front panels are milled from solid blocks of aluminum. A single unit requires eight hours on a sophisticated tri-plane CNC machine. The panel’s “swirl” motif is subtly ribbed, imbuing it with a unique combination of matte and glossy finishes. Gratifying operational touches include the P1’s surreally smooth and whisper-quiet drawer, and the two knobs on the Grandioso C1 analog linestage, which connect to a complex bearing array that imparts a luxurious, satisfying weight. The knobs bathe in a soft blue glow that brightens when you touch them. In addition, the speed at which you turn the volume control affects the rate of volume change. Turn the knob slowly and the volume alters by small degrees; turn it quickly and volume shifts rapidly. It’s enough to make you forego the remote, although that device, too, is beautifully-honed and intelligently arranged. The C1 is housed in a separate chassis; two boa-constrictor-like umbilical cords ferry power from the PS to the C1.

Needless to say, the Grandioso stack is a delight to regard and to use—and, as it turns out, to hear. All those design tweaks yield a sonic purity that sweeps away distractions and enables listeners to access an unprecedented level of musical detail. One of my standard tests for detail retrieval is the deep mix of Peter Gabriel’s So. For instance, on the chorus of “Mercy Street,” Gabriel doubles his primary vocal with one that’s an octave lower. Played through mid-fi gear, that second vocal line is essentially inaudible. Through a good high-end system, you can always hear it; but the better the system, the more detail is unearthed, and the more evident the doubled vocal becomes. Via the Grandioso stack, for the first time in my experience, the second line achieves parity with the main vocal. Similarly, while other good audio gear has allowed me to hear all the nuances of this detail-rich CD track, I’ve never been able to follow each musical line as easily as with the Grandioso stack.

Another telling example is the SACD of the Wes Montgomery Trio. The Grandioso stack exposes every last ounce of the recording’s abundant atmosphere. Further, the nuts and bolts of Montgomery’s stellar acoustic guitar work—his dynamic shadings, vibrato and deft touch—come through with fascinating clarity. The level of detail wrought by the Grandioso stack made me want to hunker down and listen to each track just to see what Montgomery would do next.

On the analog front, I treated myself to the L.A. 4’s direct-to-disc LP, Pavane pour une Infante Defunte. Through my Goldmund phonostage and the Grandioso C1, its music poured out with uncommon smoothness and effortlessness, and dynamic emphases really popped. In keeping with the theme of purity, the sound was free of any specter of electronics.

Nor does the Grandioso stack short-change other sonic virtues. The swinging rhythms on Mingus’ “Better Git It in Your Soul” will have your whole body moving. The Grandioso stack renders this track exactly as it’s meant to sound: fun! Dynamic transients, which occur in abundance on this piece, never veer out of control. Similarly, Miles Davis’ trumpet on “Summertime,” from Esoteric’s own SACD of Porgy and Bess (if you can find it, buy it), is incisive but never piercing. The same track reveals a soundstage so full and deep, my reference electronics sounded squashed by comparison. 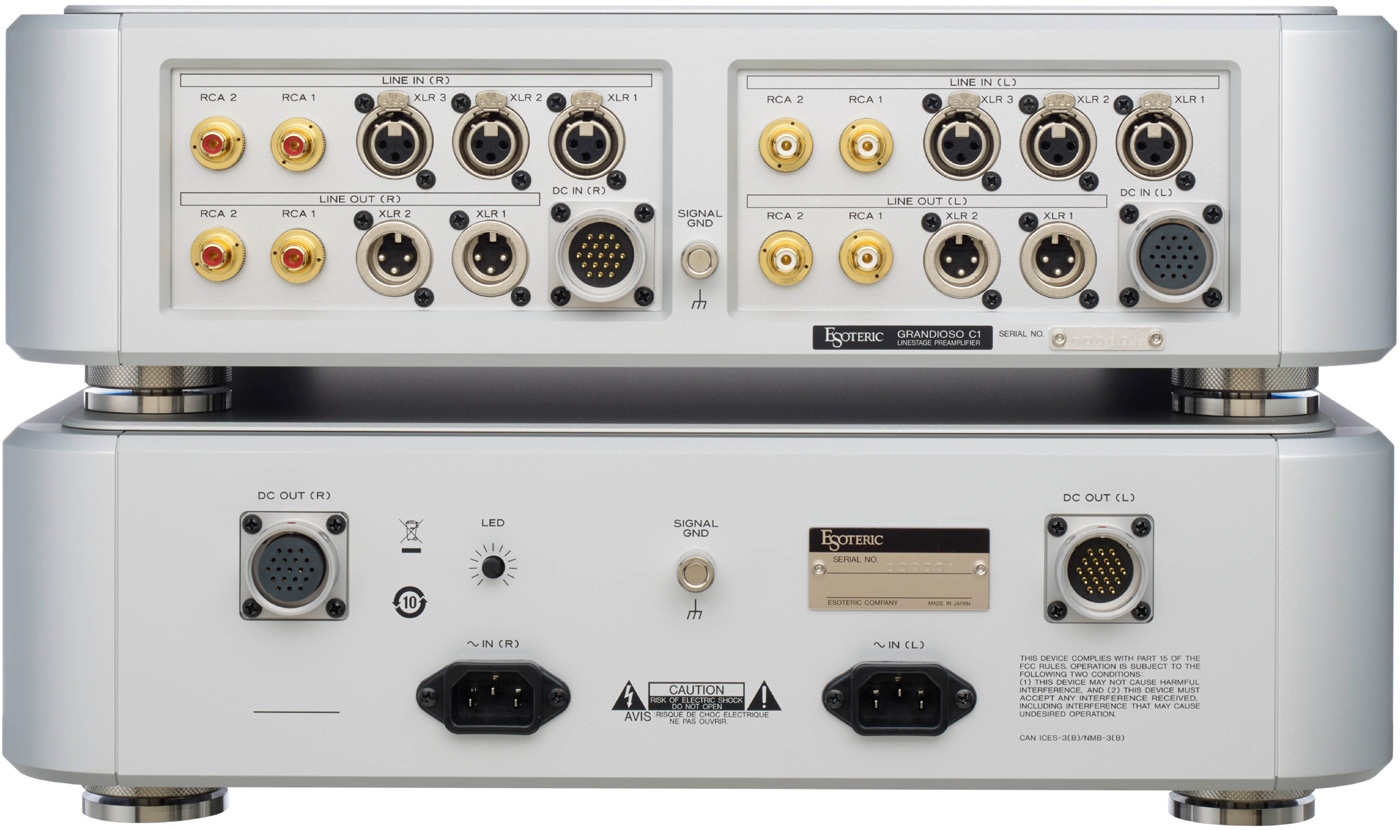 The Grandioso’s tonal balance is well-nigh perfect, too. The stack blessed my reference speakers with the most bass weight and definition they’ve ever exhibited. Listen, for instance, to the profundity of the lower registers of Michael Wolff’s Bösendorfer and the thrum of the upright bass on his 2 AM CD for two examples of the Grandioso’s way with bass.

I’m happy to report that these virtues are apparent regardless of source. I’ve already cited CD, LP, and SACD; but the stack, specifically the D1, is equally accomplished when it comes to USB. Hi-res PCM and DSD material via this interface sounds much the same as the HDMI-borne hi-res stream from the P1. That’s the sign of an excellent USB implementation. Unfortunately, the C1 doesn’t support streaming. For that, you’ll need to add a stand-alone network streamer. There isn’t one in the Grandioso line, but Esoteric’s flagship N-01 streamer should fit the bill nicely..

Although I treated the Grandioso stack primarily as an inseparable whole, I did listen to the M1 monoblock power amps on their own. I would describe them as refined tigers. “Refined” because they demonstrate the same sense of purity, control, and effortlessness that characterizes the C1. As for the “tiger” element, I used the M1 in conjunction with some challenging loads—most notably the new B&W 800 D3. These speakers won’t give their all unless they’re fed droves of current. Several amps I’ve tried have failed to bring out the B&W’s best, leaving them spatially flat and dynamically lifeless. Not so with the M1s. These amps allowed the 800s to achieve all of their formidable glory, and proved to be the best match I’ve yet found for these speakers.

Yet the biggest difference between the Grandioso stack and my reference system, which currently also includes a dCS Rossini player/DAC, has less to do with sonic checklists and more to do with musical emphasis. The Esoteric components excel at deconstructing the elements that make up the musical whole. In contrast, the reference system presents a more organic picture, but the elements comprising it are less evident. Both systems draw you in: The Esoteric does it by delineating each musical “tree” with spellbinding clarity, while the reference system’s presentation emphasizes the scope and colors of the forest.

Given these characteristics, it’s no surprise that the Grandioso stack’s presentation is more forward than that of my reference system. It’s also more forward than components I’ve heard from other Japanese manufacturers such as Technics, Luxman, and Accuphase. In this respect, the Grandioso stack differs from the more laid-back style common to other Japanese gear. Neither is “right”; it’s simply a matter of preference between front orchestra and rear orchestra seating. If you like your music up close and personal, you’ll be riveted by the Grandioso’s perspective. In a way, that sums up what the Grandioso stack delivers: consummate Japanese purity and quality, coupled with a more overtly American sonic style.

Esoteric’s answer to the question of how to achieve sonic purity, which here manifests itself as an absence of anything that would distract from immersive musical detail, was to rethink and refine every element of the audio stack. It’s no exaggeration to say that the resulting components are a design and implementation tour de force. Consequently, with a couple of provisos regarding sonic preferences, they’re well worth the attention of those fortunate enough to be able to afford them.