Power amplifiers aren’t the most exciting components in the world. They normally don’t have many bells and whistles on their faceplates and thus don’t command as much attention. Most people probably place their power amp on a bottom shelf with good ventilation and, aside from switching it on, pretty much forget about it. Which is a shame, because, personally, I think power amps are beautiful little beasts.

Many entry-level listeners want the convenience of their preamps and power amps in a single chassis. Which is fair and understandable. It’s less expensive that way and, let’s be real, there are plenty of great integrateds out there. This is all old stuff at this point, and basically part of the audiophile gospel, but it’s worth repeating. There’s a real argument that separate components sound better for a number of reasons, the primary one being that manufacturers can allocate more attention and budget to each section when they’re separate. This inflates the cost of a system, of course, and means jamming more equipment into an already packed living room. Personally, I love stuff, and can’t have too many shiny metal boxes [Wait till you get to my age, buddy—JV], but I understand that most people will choose convenience over incremental upgrades. Regardless, if you want the best sound for your system, separates are a great way to go.

Emotiva is an American company based in Tennessee, and, according to its website, plans to bring its full manufacturing process in-house in “the next few years,” which is great. Moreover, Emotiva’s mission statement specifically calls out the ballooning prices of high-end audio gear, so clearly this is a company after my own heart. Its branding is tight, with bright blue LEDs as its aesthetic calling card, and a general sleek black look is common throughout its product line. No silver here, unfortunately. (I suspect that limiting finish options is one way Emotiva is able to keep costs down.)

The $299 A-150 stereo power amplifier is a part of Emotiva’s BasX line, which, as the name suggests, is a collection of basic components sold at really good prices. I can’t say I’m a huge fan of the capital “X,” which harkens back to 90s-era cyberpunk, but I am an enormous lover of affordable, quality sound, so Emotiva gets a pass. On top of this, I can’t say that I find the A-150 particularly beautiful, which shouldn’t be a shock. I get the distinct impression that Emotiva is more interested in manufacturing great-sounding components than making great-looking ones. 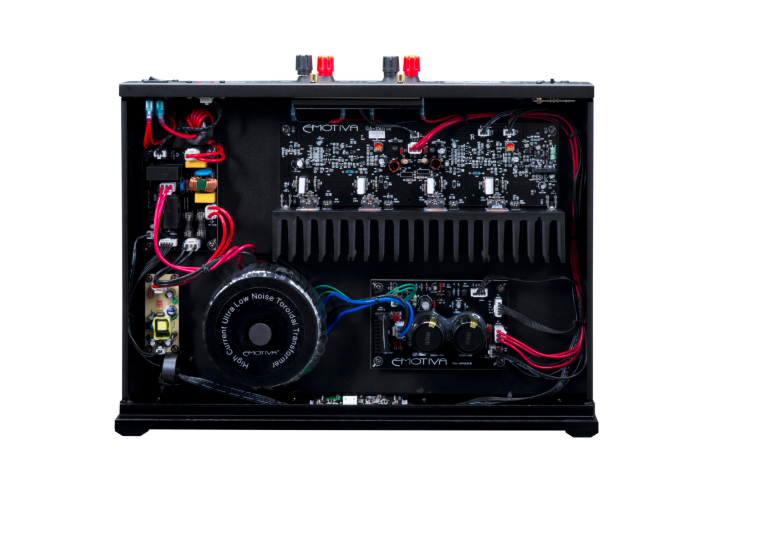 The A-150 delivers 75Wpc into 8 ohms and 150Wpc into 4 ohms—respectable numbers and plenty of power for most people. The amp is rather compact at only 17″ wide and 3 1/8″ high, and weighs a relatively light 15.5 pounds. The front panel has two blue LEDs, one for each channel, and the power button glows blue when the amp is active and amber orange when it’s on standby. I like the minimalism here, with only two bumped-out corners as decoration, and the Emotiva logo, the product line, and the component name on the faceplate. Not beautiful, but serviceable.

Setup was a breeze. I used my Cambridge Audio CXA80 as the preamp, so all I had to do was swap the speaker cables and run some RCAs. The A-150 uses a two-prong power cable, which means that your fancy upgraded three-prong cable won’t work with this unit. Not the end of the world, since there are nice two-prong cables available, but worth noting. I haven’t tumbled down the rabbit hole of power cables just yet, but I won’t pretend that I can resist the siren song forever. Anyway, the binding posts are normal five-ways, not fancy by any means, but effective. There’s a power switch on the back that puts the amp into standby mode where it’ll stay when not in use, and a button on the front to get it up and running.

The A-150 is a Class AB design, which is surprising, considering how cool it runs. It was almost cold to the touch, and even after listening to music for at least six hours straight, it barely broke a sweat. I didn’t feel a single bit of heat coming from the chassis in all the time I used it, which probably means it would be happy tucked away on the bottom shelf of an entertainment center. It was also surprisingly quiet, which is important to me. I have a tiny little listening room, so excessively noisy equipment is a big distraction. No problem there, though. Heat and noise are always considerations with an amp, and the A-150 is solid on both fronts.

My initial listening impressions were mixed. The bass felt bloated; the top end maybe had a hint of grain; but the mids were smooth. Overall it was a nice, relaxed sound. As time passed though, the A-150 developed a pleasant sleekness. That top-end grain disappeared, and the bass tightened up. I never felt totally satisfied with the low end, but it definitely improved. There were moments where I thought it was almost veiled or just a little too loose, although that never overwhelmed the music.

When I think of hi-fi, I don’t necessarily think of an inexpensive power amplifier. In the same way, when I think of hi-fi, I don’t usually think of My Bloody Valentine’s classic album, Loveless. Sure, it’s no Diana Krall, considering it was allegedly recorded in nineteen different studios, but the new vinyl pressing of Loveless sounded crisp, clear, and gorgeous through the A-150. It handled the very first huge pulsing scream of the group’s effects on the opening track “Only Shallow” with finesse. Despite the notoriously obfuscated percussion, the drums actually sounded like drums instead of distant patter. The drummer only plays live on two tracks, and one of those two tracks, “Touched,” was a great example of what the A-150 could do. The percusssion sounded tight and focused, with crisp attacks and deep, satisfying booms. The vocals overall in Loveless are more melody than actual human language, and that tone came through naturally and clearly. For the most part, Loveless experiments with studio sound and takes it to extremes, but this amp was up to the task of satisfying reproduction, even when battling a myriad of densely woven effects.

For a different example, on “Wasted Acres” from Grizzly Bear’s album Painted Ruins, there’s a hammering percussive noise in the background, an almost steel-on-steel sound, expansive and full of really satisfying reverb. My Cambridge Audio CXA80 did a lovely job of providing a neutral, full reproduction of this clang, but I’d argue it sounded even better with the A-150. There was a nice warmth and detail as the music picked up; yet, throughout, that percussive ring stayed clear and grounded. In contrast to Loveless, Grizzly Bear records feature close, coherent vocals that are even and persuasive. Ed Droste’s warbling voice is one of the best parts of this album—and of Grizzly Bear as a whole—and a worthwhile amplifier really has to nail his tone. I was more than happy with the A-150 in this regard; Droste’s voice retained its soft balance despite the rest of the music threatening to drown it out.

Returning to My Bloody Valentine for a second, the shoe-gaze genre as a whole feels like a good analogy for this amp. Shoe-gaze is heavy and powerful and melodic and lovely, which is both confusing and pleasing at the same time. That’s how I felt about the A-150. The amp wasn’t supposed to sound great, given its price. (That’s the common audiophile wisdom, at any rate.) And maybe it was imperfect, but it seemed to embrace those imperfection, from the design to the sound, just like shoe-gaze embraces chaotic guitar effects and feedback loops that others might consider too difficult on the surface.

The A-150 had a heavy low end, and the treble didn’t quite sparkle, but the midrange stayed pleasant and sleek, and when you put it all together, it was a really good sound. It wasn’t perfect, but I enjoyed it anyway. Loveless has both plenty of specificity and plenty of obfuscation, an odd little paradox, but a fantastic one. At $299, the A-150 is also an odd little paradox. You’d think it would be all heft and no subtlety, but that’s wrong. The A-150 may be budget gear or entry-level, but it doesn’t sound that way.

I’m tired of the cliché about entry-level equipment that keeps getting posted on forums. If anyone points out a flaw in budget gear, someone inevitably says, “You get what you pay for.” Which basically means, cheap gear sounds cheap. Yet the A-150 doesn’t sound cheap, and you definitely get more than you pay for. I’d gladly recommend the Emotiva A-150 power amplifier to anyone looking for great sound and decent build-quality at a normal price.