The high-end’s annual January bacchanal, better known as CES has weathered all sorts of setbacks over the years–from global recessions, foreign competition, even MP3. This winter we learned the meaning of the meteorological phenomenon known as the Polar Vortex as a record breaking, cold snap converted much of the United States into the eternally icy landscape currently enjoyed in the hit movie Frozen. With flight delays and cancellations rising into the thousands, attendance got off to a slow start and probably never quite recovered. Still industry spirits remained high, and for those who braved the elements and airline terminals most gave the CES 2014 edition a thumbs up. As for the show, and compared with last year I sensed that the impact of turntables and reel-to-reel machines has softened somewhat and was replaced by an onslaught of media server components existing in response to what has become the year’s latest buzz word, DSD, or in some instances double DSD and the streaming services that will be supporting it and other high resolution formats. My assignment, however was non-digital electronics above fifteen grand–a heady yet traditional segment where greatness, luxury and lavish prices were discovered in equal measures.  Here are my picks for most significant introductions.

Pictured above is Jürgen Reis with MBL’s Noble preamp

MBL took the wraps off the long awaited replacements for its Noble line of electronics. Operating still in prototype form they will ultimately feature color displays (non-touch screen) and 2nd Generation LASA technology grown from the “entry level” Corona components. According to designer Jürgen Reis, LASA 2.0 is capable of driving more complex impedances and phase relationships and delivering more current than ever. Power output is up as well. For example the stereo amp is 380Wpc into 4 ohms versus the Corona C21 amp’s 300Wpc.The preamp features unity gain mode switching for lower distortion and dynamic gains. The CD player houses twin USB inputs and raises DAC resolution to 192kHz from the Corona’s 96kHz and includes DSD. Even after listening only a short while one thing is clear, Reis continues to lift switch-mode technology to new heights–quite a task when you already produce one of the most transparent loudspeakers in the world. Pricing is TBA but look for them mid-year in the $15-20k range.

Krell iBias Amplifiers
Krell debuted its iBias amps as “smart” Class A designs with a difference. Krell’s patent-pending new technology uses Class A circuitry yet consumes far less energy.  It eliminates crossover distortion, says Krell because the iBias circuit is always active and  measuring output current in real-time and providing instantaneous bias adjustment according to demand. Available in both mono and stereo versions and with Ethernet connectivity. Driving the YG Sonja 1.2 via Nordost cabling, the experience was measured, with a hint of warmth and a marvelous sense of space. The line includes two monoblocks, the Solo 375 and Solo 575 ($8750 & $11,250) and two stereo amps, the Duo 175 and Duo 300 ($7500 & $9500). 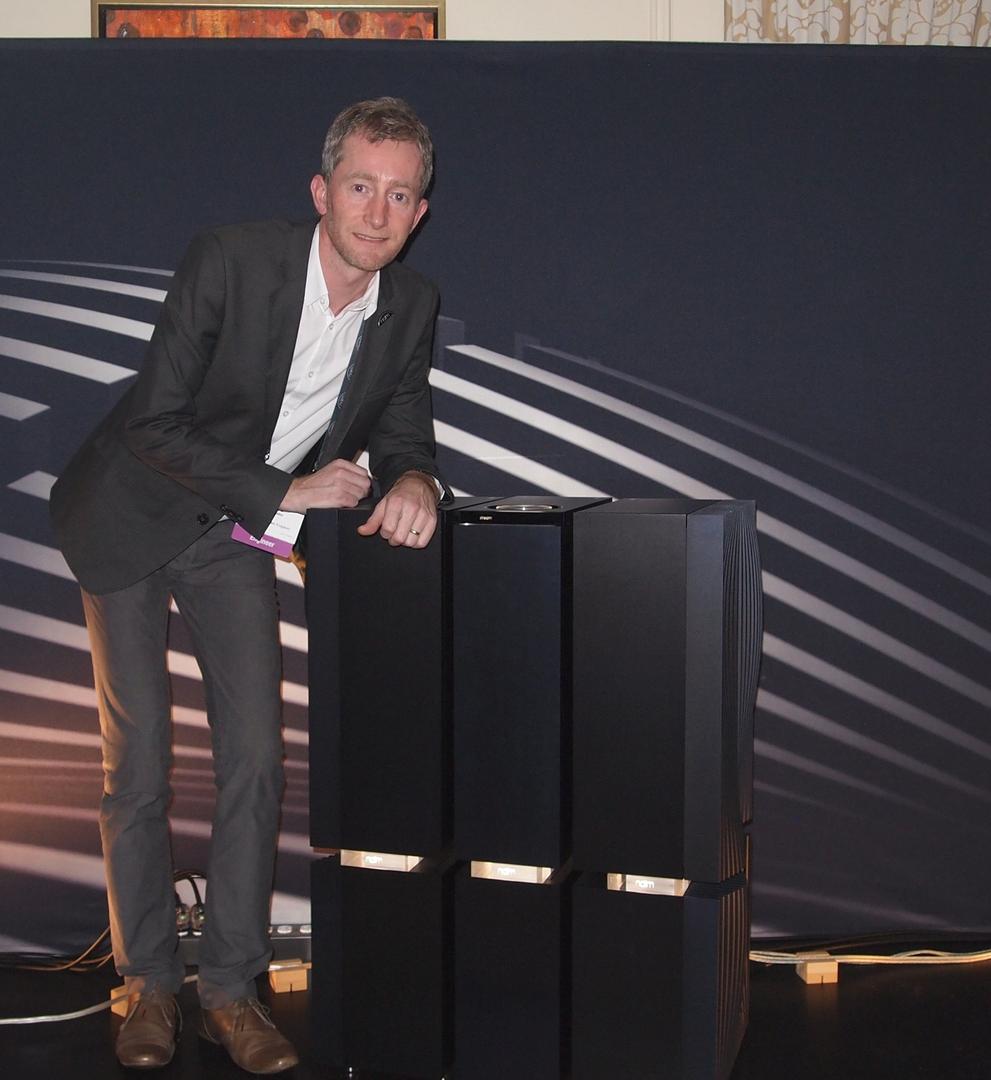 Naim’s Steve Sells and the Statement

Naim Statement NAC S1 Preamplifier and NAP S1 Monoblocks
The Naim Statement is unlike any preamp/amp separates I’ve ever encountered. The industrial design monoliths are stunning–the metalwork and sculpted heatsinks undergo hours of machining and CNC and polishing. Opting for no global feedback, the bridged-design amps are each rated at a massive 746 watts (literally one horse power) into 8 ohms, 1450 watts into 4 ohms and over 9000 watts burst power into 1 ohm. Extreme? Here are examples;  The transistors are custom made. The power supplies are A-frame suspended and even the thermal paste used to ensure optimal conductivity to the heatsink is Nano diamond based. The preamp’s new Naim DVC volume control uses a fixed set of single resistors (no combinations) for each of its 100 volume possibilities and includes a chip volume control that is used while changing volume to allow a smooth progression of change–the millisecond the volume is fixed the electronic volume control switches completely out of circuit back to the now set stepped attenuator. While I was unfamiliar with Naim’s $80k S-800 Ovator loudspeaker, sonics were massive, well integrated and effortless. Shipping is scheduled for the July/August window. Price estimate, $200,000 (preamp and monoblocks)

Soulution 711 Amplifier
The Soulution room featured  its new 711 amp ($65,000) and what turned out to be my first (but not last) listen to the estimable Magico S3. The new 711 amplifier shifts from a linear to switch mode power supply and sports 160Wpc all the way down to 1300Wpc into 1 ohm. Also featured was the 725 preamp ($50k and $55k with phono), a fully regulated design with added capacitors to bolster the power supply (4 x 600VA) and add speed. Cabling were the impressive Swiss-made Vovox Textura Fortis. I was able to A/B Soulution’s new phase correction circuitry aboard the a newly updated 540 CD player and the differences were not subtle. Listening to Diane Reeves “How High The Moon” I heard less digital peakiness, greater chest resonance and much more air. Analog-like? Closing in on Vivaldi territory? Could be. 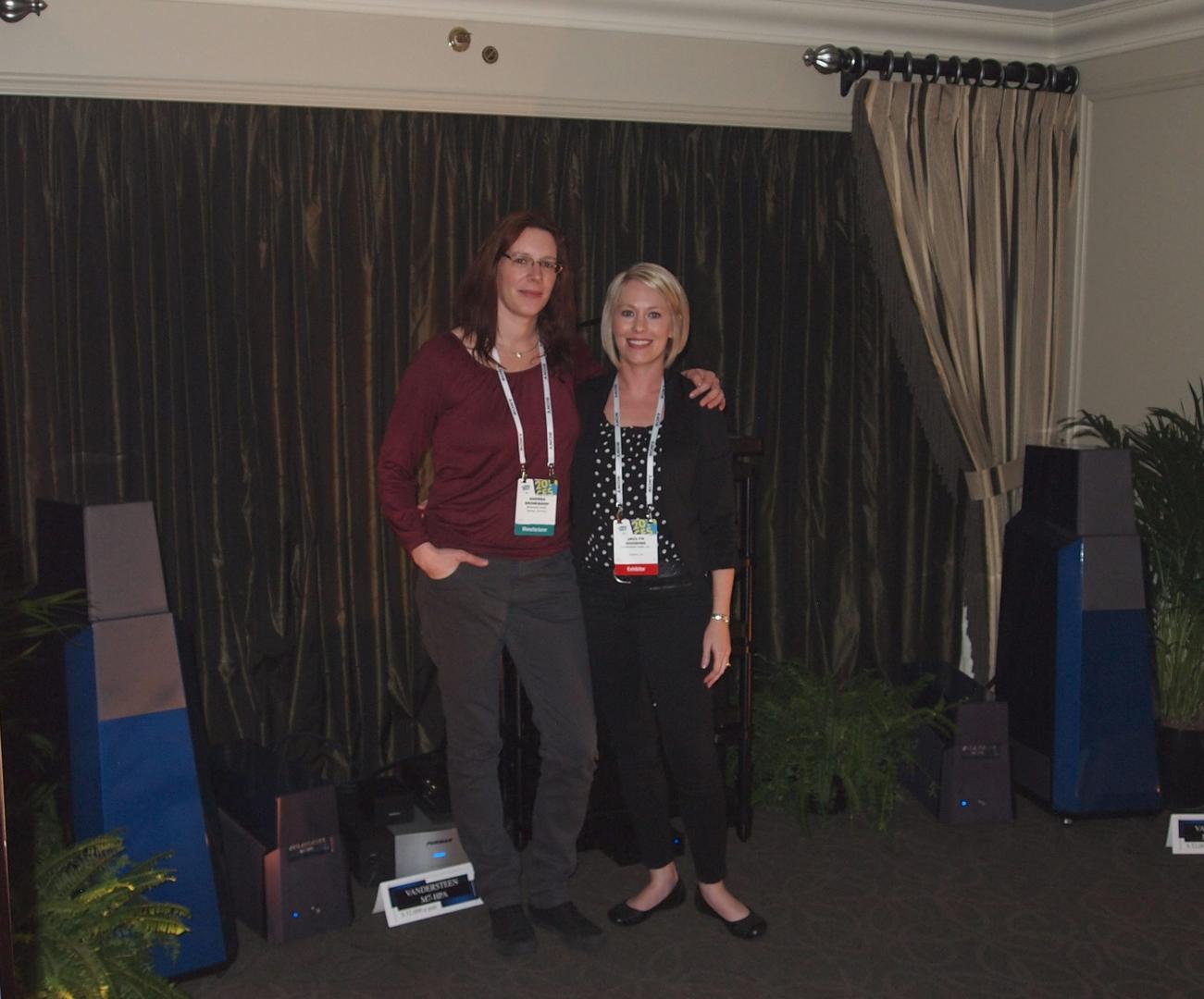 Vandersteen M7-HPA Monoblocks
Vandersteen keeps it all in the family with monos ($52,000/pr) designed specifically for it’s bass-powered loudspeakers, like the flagship Model Seven. Outputting  600W into 4 ohms the M7 is a zero-feedback hybrid-tube design with liquid cooling of output transistors. Co-designed by Richard Vandersteen and engineer Dean Klinefelter. The system was augmented with Aesthetix preamp and Io Eclipse phono stage and HRS isolation stands. As the Brinkmann turntable and Lyra Aetna combi played Diana Krall’s live cover of “A Case of You” followed by The Doors “Riders On the Storm” the system conveyed a depth, and immersion along the lines of a quasi-surround effect reminded again, who needs more than two loudspeakers?