When a company names itself Boulder it’s no surprise if a component doesn’t budge from the market very often. The 2000 series has been around about twenty years but the 2100 Series has shown it the door. The stunning 2110 preamp ($54k) (pictured below) features a new surface mount board, modularity and improved channel isolation thanks to electronically isolated and optically connected circuitry. Also fresh from the oven is the 2160 stereo amp ($52k) with 600Wpc plus a monoblock version, the 2150 ($98k/pr) which outputs 1000W while doubling down to 2 ohms. Every millimeter of the extraordinary machining is done in-house. As I listened to Tom Waits’ “Georgia Lee” through the Chario Serendipity floorstanders via Transparent Audio and Analysis Plus cabling, the first thought that occurred to me was vivid tonal color and dynamics and an otherworldy sense of ease. 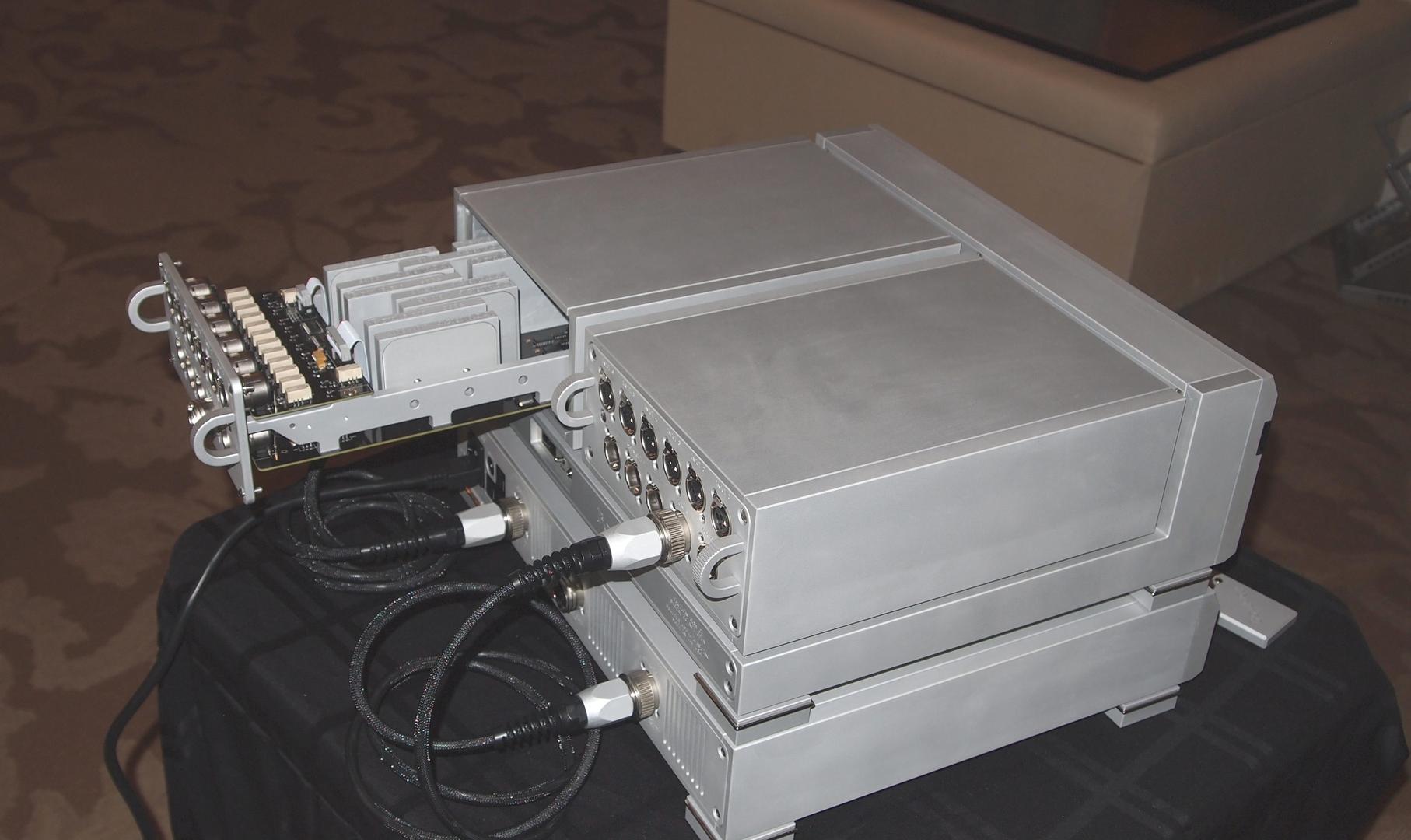 Cited in my 2013 RMAF report the Argo integrated amp ($20k) is now a reality.  It features the same circuit as the Virgo preamp and a 125Wpc amp stage that is essentially the topology of one-half of a Centaur. It also includes two balanced, two unbalanced inputs and  a HT bypass and preamp out plus its own discrete headphone amp on the rear panel where a pair of expansion slots await an optional DAC and phono stage. Shipping in the late Feb/March timeframe.

Currently an unnamed concept piece heading for production, Crystal Cable unveiled an integrated version of the Siltech Saga electronics reduced to a single, elegant cube chassis. It’s advanced packaging implements the Saga light drive system but due to it’s small size, transistors have been substituted for tubes. However the no-feedback design will output a robust 200Wpc and feature performance stable down to 2 ohms. It has five analog inputs and should be fully functional for next year’s CES. An optional phono board and digital module is also being contemplated A gorgeous touch-wheel, remote control. Price estimate: $15,000.

The newly introduced D’Agostino Momentum Series integrated ($45k)  features impeccable packaging that combines much of the  circuitry of its sister preamp and stereo amp in a chassis only slightly deeper than the original preamp.  With 200Wpc on tap it keeps internal temperatures at bay by using a more efficient heatsink with output devices bolted directly onto copper which better draws the heat off the transistors. Like the preamp, it’s equipped with six balanced XLR inputs and bypassable tone controls. 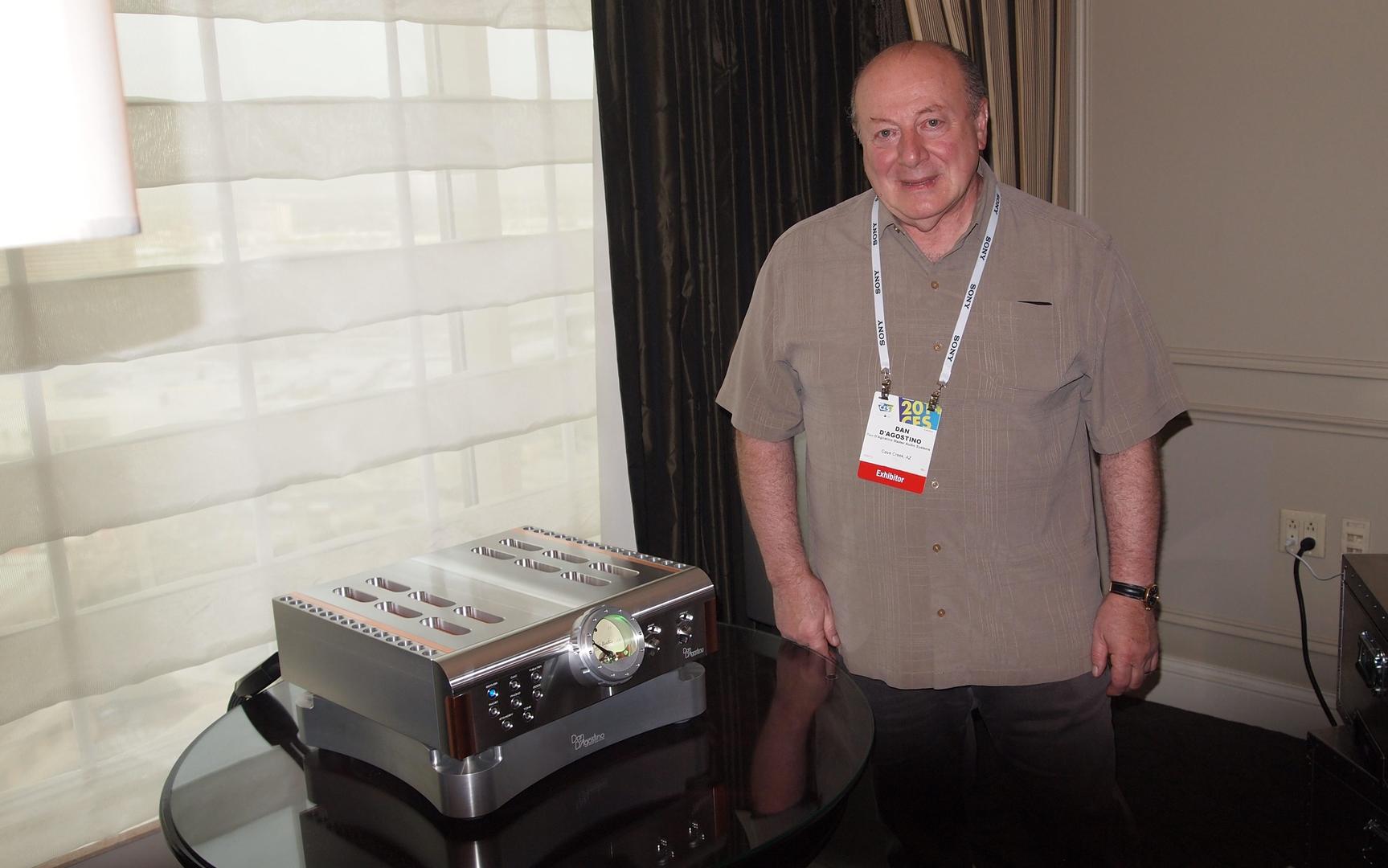 Pass Labs brings the sonic character of its XS Series flagships into its Point 8 series of amplifiers. considered the sonic bridge between Point 5 and XS lines. The goal according to Pass reps was spatial presentation and dynamic attack achieved through more sophistication and current tailoring that’s running in each output stage. The nine model range goes from a modest Pure Class A 30Wpc stereo amp ($6500) up to a goliath 600W High Voltage monoblock ($26,000/pr) and 200W Pure Class A monoblocks ($40,000/pr)

T+A presented the world-debut of the exquisite HV (High Voltage) series separates: the new 300Wpc A 3000 HV bridgeable, power amplifier ($18,500);; and the P 3000 HV ($15,000) preamp. The HV stands for high voltage, and describes solid state devices that are running at a much higher voltage (over 4 times that of a conventional transistor amp) T+A states that a more tube-like character is achieved along with the incredible power. The tremendous rigidity and consequent isolation of the casework is due to the solid aluminum plate frames that form sealed chambers and to which all the subassemblies and external components attach. Also available is the PS 3000 HV ($12,500), an external power supply upgrade for the A 3000 HV. 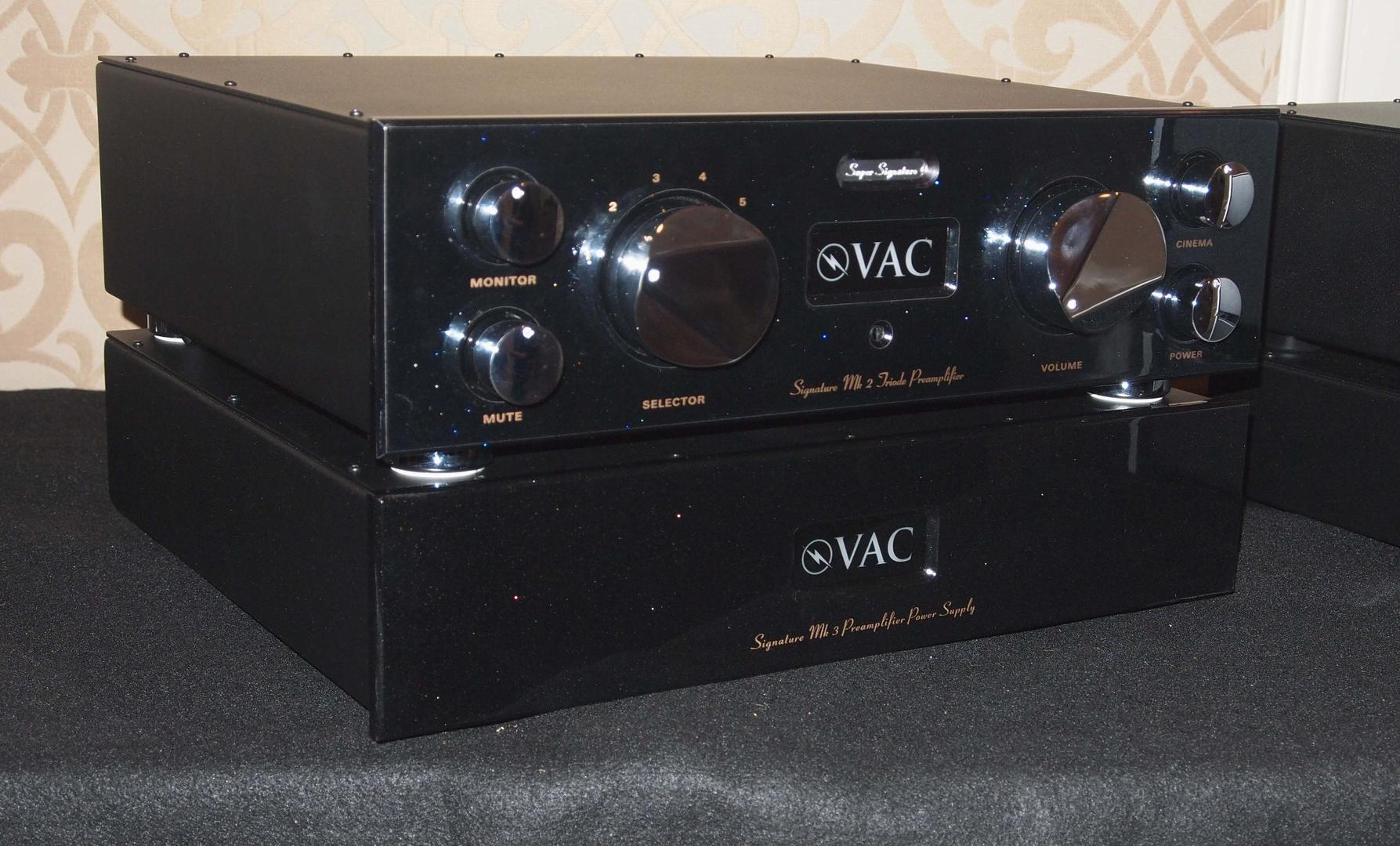 The Master Signature line preamp (pictured above) which uses all the major elements of the Statement preamp and implements them in a more simple format and package ($26k linestage $40k with phono). Designer Kevin Hayes shared the fact that with the removal of the monitor switch which was still indicated on the prototype he was able to add another balanced input on the back panel-a worthy trade I’d say.

EMM Labs MTRX monoblocks are waaaay beyond massive. The Class AB design outputs 1500W and weighs somewhere in the upper reaches of 300 pounds (no one was quite sure). Dwarfing the nearby Sony AR-1 loudspeaker and cabled up with Kimber Select wire, sonics were heavenly as they should be–the MTRX hovers (if that’s possible) in the $130,000/pr range.

Qualia of Japan is already well known for it’s brilliantly machined (CNC occurs in Europe) and dearly priced components, However next year look for a more approachable lineup with costs roughly half that of the Indigo flagship products. Also to come from Ypsilon will be an dual mono, integrated hybrid design (tube input/solid state output) that will opt for transformer attenuation, a 100Wpc output, loads of Class A bias, and be fully discrete (no op-amps). Also looming is the possibility for a DAC module option. Pricing TBD but likely in the $16-18k range.

“Beyond the beyond” is the Siltech Triple Crown cabling. Conductors are mono crystal silver and utterly unique jewel-like terminations that with the twist of a tiny adjustment knob will self-center around RCA contacts. With terminations wrought from rose gold-plated aluminum the  design provides extremely low capacitance. Icing on the cake is the switchable shield that permits the customer to float or ground the wire at each end. Price is TBD but it will be easily the most expensive in the Siltech line. 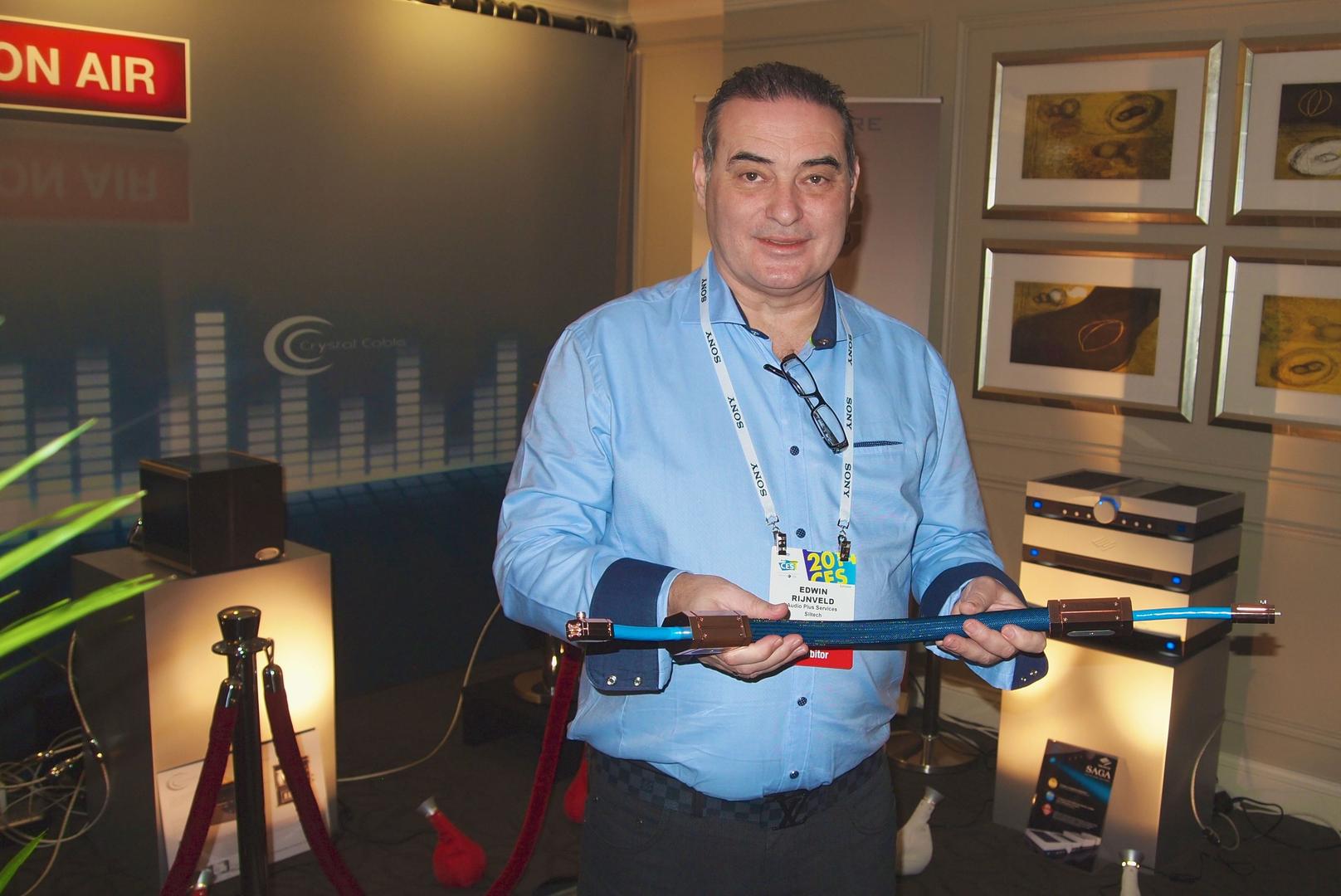 Lead designer Ted Denney of Synergistic Research demonstrated SR’s latest innovation, the XOT. Touted as high frequency filters and sold in pairs ($399), they passively connect to the binding posts of loudspeakers, in this instance the superb Magico S5. A richer more dimensional sound space was the result. I’m anxious to hear whether I can get the same effect in my listening room.

And finally, in the “apple doesn’t fall very far from the tree” department, Bret D’Agostino (son of Dan) debuted the BSC  5-series line of pure Class A amplification. Highly innovative with variable bias adjustments between Class A and AB. The 5-series  includes a 150W M5 monoblock and a 75Wpc S5 stereo.