How do you follow an act like the Elac Debut B5? The pint-size, two-way compact simply crushed it with its big, hearty sound and puny $229 price tag (reviewed in Issue 260). In a rare convergence of enthusiasms, it won the hearts of high-enders and mainstreamers alike. However, for Elac’s VP of Engineering Andrew Jones, a longtime advocate of concentric drivers (look no further than his work at KEF and Pioneer/TAD, for examples) there was unfinished business. Hence, Uni-Fi: a new line of affordable Elac loudspeakers, including the UB5 compact under review here, plus a UC5 center-channel, and the floorstanding UF5. The UB5 features concentric midrange/tweeter transducers in a three-way driver configuration.

The UB5 is a stand-mounted compact with a bass-reflex design that uses a rear-firing dual-flared port. Just shy of thirteen inches tall, it’s easily one of the smallest three-ways ever made and its compact size is almost entirely owed to the concentric driver’s remarkable space-saving properties. Also known as a coincident (or archaically as a coaxial) driver, it’s a sophisticated design that insets a one-inch soft-dome tweeter at the center of a four-inch aluminum midrange. Its crossover point is 2.7kHz. Also specially designed for the Uni-Fi line is the five-inch aluminum woofer. Apart from some minor trim changes, the UB5 is a near-spitting image of the B5 with some classy touches added, such as premium binding posts and the magnetically attached fabric grille. The result is a sturdy MDF-braced enclosure that adds a mere couple of inches in depth. Like the Debut line, it’s nicely finished in black brushed vinyl.

In a conversation about the UB5’s conception, Jones said, “The enclosure is a development from the B5. It wasn’t fully planned when I did the B5, but when starting work on the UB5 it made sense to use the same frontal dimensions so that I could use the same grille tool. I changed the logo and changed from push-pins to magnetic fastening to differentiate it from the B5. To get the required volume and to compensate for the space taken up by the separate midrange chamber, I added depth to the enclosure. I chose to make the midrange enclosure part of the cabinet construction, rather than a tube on the back of the midrange, so that it could add bracing to the cabinet. In addition I added an extra brace, all to help stiffen the cabinet.” 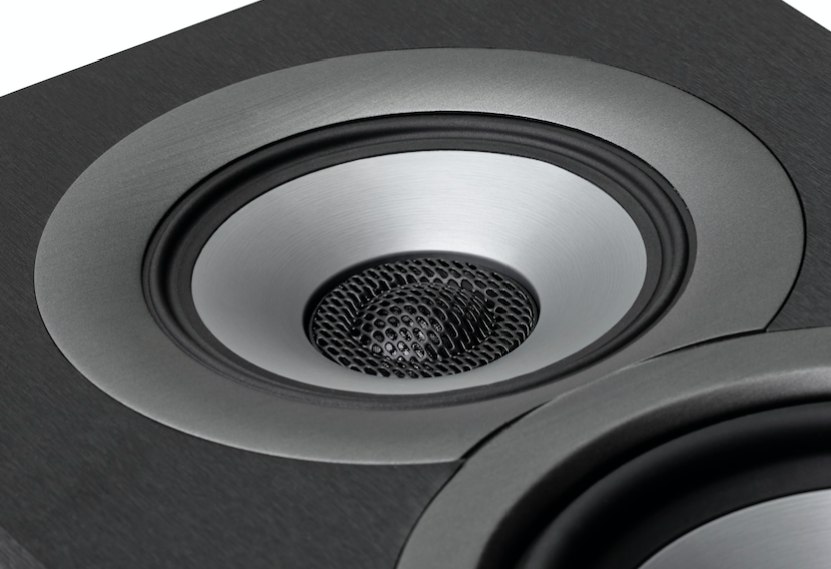 As for the change from the B5’s woven mid/bass to the UB5’s aluminum bass driver, Jones explained, “The B5 used woven aramid because it was a two-way system, so the bass driver had to perform double-duty as bass and midrange. Once I went to a three-way system I was free to use a material that could be optimized specifically for bass reproduction. This includes having the correct mass, and being able to get the required stiffness without having to worry about cone breakup messing with the midrange. The bass driver motor structure was then fully optimized to give me better bass performance than was possible with the B5. Likewise, the midrange could be optimized as just a midrange driver, and because of the cone size and voice-coil size I could get the breakup-mode to be a high 8kHz (by contrast, the TAD beryllium driver, although larger, was only marginally higher at 9kHz).”

Sonically, if you loved the B5—and any self-respecting audiophile should—you’re gonna love the UB5 just a little more, and maybe a lot more. The UB5 is the B5 gone to finishing school. It boasts fewer box colorations and smoother, more accurate tonality, and is emboldened by the greater output and dynamics that befit a dedicated three-way design. It’s still a bit dry in the treble but nicely detailed without being offensive. Basically, it’s everything the B5 already is plus all the extras Elac could stuff in while still graduating with a $499 sticker. In musical character, the UB5’s voice will be familiar to all who have encountered the B5 (you mean you don’t already own a few pairs?), or the Pioneer SP-BS22, or even the state-of-the-art TAD CR-1. The $42k TAD? No, I’m not being glib. All these examples share (within reason) a similar overall voice—one that is anchored by a balanced and dynamic midrange, a forward energy (no suckouts), and a persuasive lower midrange and upper bass.

It was easy to appreciate how the UB5’s dedicated woofer and concentric driver have been put to use. Two key issues stand out: The first was the point-source-like coherence that the coincident created. Because the coaxial arrangement creates a near-ideal time alignment, the experience is more akin to a single full-range driver with the benefit of the two transducers both operating within their specified frequency ranges; this can yield a significant improvement in output and dynamic payload, and with less distortion. Compared with the two-way B5, there’s an added specificity, steadiness, and focus to images that are trademarks of the concentric driver. This tighter imaging allows vocalists an even more distinct stage presence that I find especially attractive. Add to that a sibilance range that was natural, sharp, and quick (as in life) but not overdone to the point of drawing attention—qualities I plainly noted during the title track on Jennifer Warnes’ The Hunter LP [Impex]. Another great example was Rosanne Cash’s version of the My Fair Lady tune, “Wouldn’t It Be Loverly” taken from a PBS in-studio broadcast. Here the UB5 conveyed all the close-miked intimacy of the performance, gently accented with warmth and a you-are-there immediacy. At the more dynamic end of the vocal spectrum, the UB5 reproduced BS&T’s frontman David Clayton-Thomas with all the unbridled brio he’s known for. His raspy, full-throated performance of “More and More” was captured in all its nuance and electricity.

Bass quality was the other most notable improvement—a development I expected in light of the addition of the dedicated woofer (its crossover point is 270Hz). There was rock-solid fifty-cycle midbass output similar to the B5 but qualitatively much more controlled, and perceptibly less reliant on the port. For a dance track such as Michael Jackson’s “Billie Jean” there was a hip-gyrating amount of midbass slam and door-rattling pulse. Timbral definition in this range could become a bit woolly and indistinct at moments, but having that crucial low-end energy was a tradeoff that more than makes up for this minor issue. To be sure, actual bottom-octave bass (sub-40 cycles) was beyond the UB5, but by any standard this was one game little loudspeaker. Soundstaging was about average in width and depth; nonetheless, Rutter’s Requiem “Lux Aeterna” still conveyed at least some sense of venue dimension and expanse, with discernible boundaries and depth. The height component could have been more convincing too.

To the UB5’s credit and throughout this evaluation I found myself comparing it to far pricier speakers, such as the excellent KEF LS50 ($1500) or the Revel Concerta2 M16 ($850, review forthcoming). Given its meager $499 price tag, it shouldn’t come as any surprise that the UB5 has a couple of weaknesses. Transparency was very good for this segment; still there is a bit of veiling. The UB5 doesn’t fully shed the bounds of its enclosure—its cabinet doesn’t fully disappear like those of a handful of more expensive small monitors do. Thus during the Rachmaninoff Symphonic Dances, images often seemed more localized in the box. The tweeter was generally well behaved but when pushed hard, a hint of glare snuck in during the aggressive piano solo from the Manhattan Jazz Quintet’s “Autumn Leaves.” So no, the UB5 is not perfect but the primary point is that it isn’t easily pigeon-holed. It was fiercely competitive with speakers well beyond its price segment.

With the Debut and Uni-Fi series Jones has cemented his bona fides in the realm of entry-level loudspeakers. And once more—this time with the UB5—he has caused us to recalibrate our expectations for affordable speakers. Like a Michelin-starred chef, Jones is a guy who can grab any handful of ingredients and whip up a five-star meal. However, as outstanding as they are, the B5, UB5, and their floorstanding brothers are still entry-level and akin to “small plate” appetizers for many high-end gourmets. Transducer tapas, you might say. But not for long I imagine, at least if the news I’ve been hearing from Elac comes to fruition in 2017. So, whatever Jones and team might be cooking up in Elac’s kitchen it should be quite a feast. Meanwhile enjoy the bounty that is the Uni-Fi UB5. It might just be the best five hundred bucks you’ll ever spend.

The 40 Greatest Bargains in High-End Audio