One of the great stories in the high end for 2015 is the resurgence of the venerable German loudspeaker company Elac, and its hiring of one the industry’s top designer/engineers Andrew Jones. Jones, formerly of KEF and TAD, wasted no time getting to work, and within a few short months brought to market the Debut Series, an entry-level lineup of loudspeakers. Recently I wrote about the Elac Debut B5 (Short Take, Issue 259), a two-way compact with mighty intentions and an unpretentious $229-per-pair sticker. There, I heralded its class-shattering performance and sonics, and the stupendous value that the speaker represents. However, there’s no harm in admitting that even a mighty-mite like the B5 may not meet every audiophile’s expectations for dynamic output and bass extension, right? That’s why I also called the B5 “the teaser”—a compact that even within its limits seemed to auger much more to come.  Presenting, the “much-more-to-come” Elac Debut F5.

Before the cartwheels begin, a quick description. The F5 is a three-way floorstanding loudspeaker in a bass-reflex enclosure. It has the same basic DNA as its smaller sibling, the B5. The form factor is virtually the same: It looks like the B5 after a teenage growth spurt—a good two feet of cabinet, to be exact. The driver components are identical. The F5 uses the same cloth-dome tweeter, which thanks to the deep spheroid waveguide provides good off-axis dispersion that doesn’t lock the listener within a narrow sweet spot or leave an adjacent listener out in the cold. Also carried over is the 5.25″ woven-Aramid woofer with an oversized magnet and vented pole piece. But the quantity has grown from a single mid/bass driver to three woofers, or more accurately, a mid/bass and twin woofers.

Crossover points are specified at 100Hz for the mid driver, which in turn, hands off to the tweeter at 3kHz. Internally the upper third of the black brushed-vinyl cabinet is sectioned off to isolate the mid/bass and tweeter, and there are twin horizontal braces to further stiffen the cabinet and prevent unwanted resonances. The bass-reflex configuration uses a single port for the uppermost tweeter/midrange section while the bottom section of the cabinet has two ports. 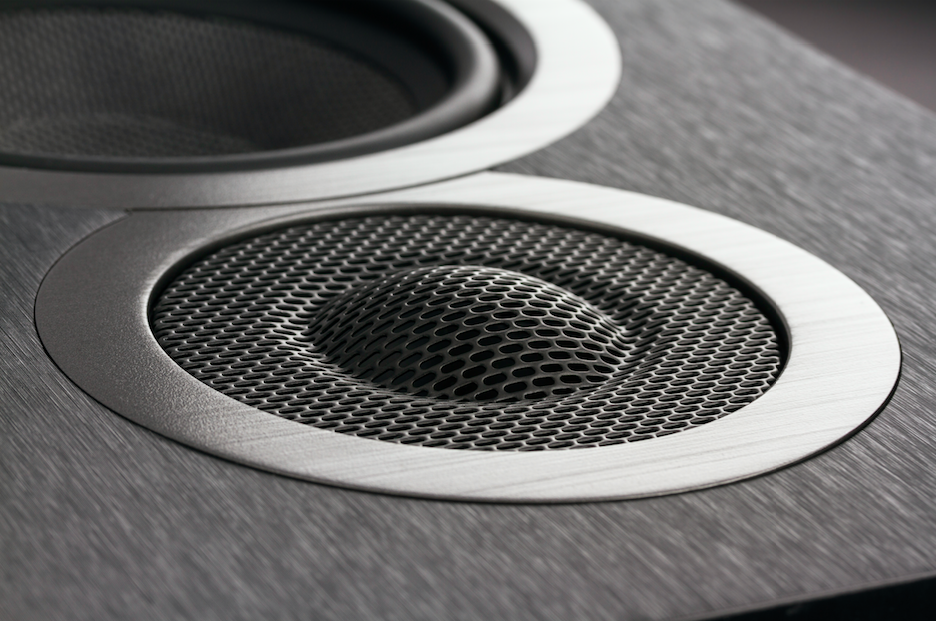 In sonics, the pint-sized B5 would be a tough act to follow under most circumstances, but the F5 still manages to steal the show. It takes the strengths of the B5—a warm, relaxed, and responsive midrange, surprising bass extension and tunefulness, a lack of cabinet and port colorations, and a strong sense of musical truth, then significantly builds on them. In sonic criteria like tonality, micro- and macro-dynamics, and transient speed, the B5 and F5 have got the essentials down pat. As I listened to Ana Caram singing “Fly Me To The Moon,” accompanying herself on a nylon-strung acoustic guitar, there were all the familiar cues—her gentle, airy vocals, the warm, subdued resonances of the guitar, and an expansive, immersive ambience that put me in mind of white sand beaches and soft tropical breezes. Turning to Christopher Cross’ eponymous debut LP, I felt the Elac accurately captured the vocal balances of Christopher Cross’ vocal and Michael McDonald’s classic harmony. It caught the distinctive rhythmic “gallop” of the backing percussion section, while the rising string section arrangements were nearly as accurate to my ear on the B5/F5 as they were on my reference ATC—the passive version of the pro model, known for its tonal accuracy.

However, the main reason why many audiophiles (including myself) might opt for the F5 over the B5 is midrange and low-frequency dynamics. Take the Bach Cello Suite, for example. Correctly reproducing the initial transients off the bow and the thick, deep, trailing resonances of this instrument has foiled all levels of loudspeakers, but the F5 does a much more than credible job at capturing the full-throated voice of this instrument. And, as I listened to the Manhattan Jazz Quintet’s version of “Autumn Leaves” it was as if someone had opened the dynamic floodgates. Compared with the B5, bass lines were reproduced with more accurate pitch and greater dynamic potency, while Lew Soloff’s tricky-to-handle trumpet blasts had the speed and authority of a much bigger and sturdier old-pro speaker, costing many times the F5’s price.

Although both models provide copious amounts of midbass energy, the biggest thing that distinguishes the F5 over the B5 is the sheer volume of air that the F5’s additional woofers can move. For classical music listeners and “big music” peeps this has ramifications beyond mere bass extension and output—areas where the F5 already outpoints the B5. The F5 creates orchestral scale and scope that paints a much more convincing and deeply dimensional landscape of a large ensemble performing in a concert hall.

Vocalists of all stripes and genders shine on the F5 with performances that are fully fleshed out with chest-resonance weight and bloom. Take “Sabra Girl” by Nickel Creek—the Elac captures the delicacy of the arrangement with the acoustic flattop and mandolin sailing and swirling around Sara Watkins’ vocal and harmonies. And then there’s the issue of backbone. The F5 doesn’t need a gut-check when called upon to play back the tortured, gritty, crunchy distortion of George and John’s electric guitars as they pegged the meters during the “fast” version of “Revolution.”

Let’s get a couple nitpicks out of the way. Neither the B5 nor the F5 is a flawless loudspeaker—although it could be effectively argued that they’re as faultless as a speaker is likely to get at these prices. Nonetheless, the tweeter remains a bit on the dry side, and the upper harmonic range could be more extended and open. Along those same lines, the F5 doesn’t always disappear as a source and there are intimations of tweeter localization.

Also as good as its dynamic strengths were at medium-loud levels, when called upon to summon the reserves necessary to reproduce Stewart Copeland’s kickdrum during the opening of “Murder by Numbers,” the F5 grew a little shy and compressed. Imaging, though very good for this segment, did lack a bit of focus and specificity. For the most part the F5 enclosure does a stupendous job, and there is very little in the way of port noise or other effects; however, there’s a small sense of the enclosure absorbing some of the output.

The Elac F5/B5 go beyond just being the rare, good speaker for the money. They’re a veritable gift to budget-conscious audiophiles and the younger audience, particularly those looking for a cost-effective, room-filling alternative to headphones. And keep in mind that the Elac/Jones collaboration is just getting ramped up!