It boggles the mind to consider how much of our hardearned cash is spent each year on ancillaries such as cables, power cords, conditioners, racks, stands, and all manner of tweaks and audio-related paraphernalia—without as much as a second thought given to the room itself. Most will acknowledge the importance of a properly tuned listening environment, but few do much of anything about it. I’d hazard a guess that, in some cases, room treatment alone could make a bigger sonic impact than all the aforementioned accessories combined. You can throw all the money you want at your system, but in a less than an optimum listening room—which the vast majority of us, unfortunately, are stuck with—you’ll never hear the full potential of any speaker.

My rude reminder of the dramatic and detrimental effect a room can have on a stereo came when I finally got around to setting up a second system in the spare bedroom. It was actually the exact same system that I had just used to review the Coincident Super Eclipse III speakers in my 14′ x 20′ main listening room (Issue 157). The mid-sized Supers performed fabulously despite having to contend with three arched doorways, five windows, and a fireplace—all the typical aesthetically pleasing but acoustically challenging trappings of an early 1950s home in the upper Midwest. Save for a pair of ASC Tube Traps guarding the front corners and 1.5″-thick double-cell honeycomb shades covering the windows, the main room is essentially untreated. Considering the implausibility of “trying out” the listening room before you buy the house, I think I’ve done fairly well—at least up until now.

While I didn’t expect the intended 12- foot by 12-foot listening space to be an acoustic walk in the park, it’s safe to say I wasn’t prepared to hear the sonic equivalent of chopped liver, either. Yet, with the system set up diagonally and the Super’s twin eights firing outwards, I barely recognized the sound I had fawned over just days earlier. (Could this be the reason some readers think we’re all deaf?) The trademark bottom-end tautness and articulation of the Coincident speakers were all but gone, and the soundstage— well, all I can say is, what soundstage? As any other hardcore audio enthusiast would do in a similar situation, I panicked. Then I called Mike Kochmann of Echo Busters.

I had actually spoken with Mike about a year ago, when I first moved into the new house. But due to laziness and the fact that I wasn’t experiencing any serious room-related issues at the time, I never followed through on his kind offer to let me audition one of his room-treatment packages. Mike was elated to finally hear back from me, and shortly thereafter I found five rather large cartons of assorted Echo Busters roomtreatment devices parked in the middle of my driveway—literally. (Can’t those delivery guys ever ring my doorbell to see if I’m home before they dump and run?) My room-tuning package included a pair of quarter-round Bass Busters for the corners behind the system, as well as a pair of Phase 4 bass towers for the opposing corners. There were two 5′ x 23″ absorption panels for each sidewall and a pair of smaller 4′ x 12″ Double Buster diffuser panels to place atop the Bass Busters. Rounding out the acoustic treatment were four triangular Corner Busters for the ceiling corners of the room. Although the large acoustic panels look heavy and cumbersome, they’re actually lightweight (six pounds or less, each) and fairly simple to maneuver or to hang with supplied hardware, if desired. Installation was an easy one-woman, two Diet Pepsi job. And when I was finished, the room and system had taken on a whole new sonic personality. 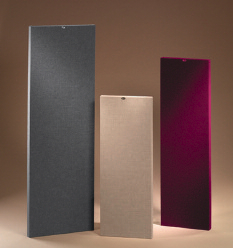 With the full-monty Echo Busters treatment in place, images immediately snapped back into focus and the glare that had me grabbing for my sunglasses disappeared. The signature bass control and definition of the Coincident Super Eclipse III was back with a capital B, and a soundstage materialized out of thin air. Since the speakers were positioned diagonally in the room, the soundstage still wasn’t as spacious as what I’m accustomed to in the main room, but with a little tweaking of the Bass/Double Busters as well as the Phase 4 bass towers, the sound was surprising clear and three-dimensional.

However, even with all the remarkable improvements I had witnessed, it wasn’t until the following morning that the significance of room acoustics finally sank in. Although I couldn’t quite identify exactly what it was, I noted there was still something amiss in the upper frequencies, so I figured I’d do a little cable tweaking to smooth things out. (Old habits obviously die hard.) As I was rummaging through a box of interconnects, I noticed the four Corner Busters still stacked out in the hallway—I had forgotten all about them. So I decided I’d quick-toss them up in the corners and then get back to cable hunting. Well, my cable-hunting safari was cut short as whatever was ailing the upper frequencies immediately vanished with the Corner Busters in place. I almost felt a bit queasy in the stomach just thinking about all the money I’d spent over the years trying to “fine-tune” my system when maybe all it really needed was a $166 set of Corner Busters.

I’m not going to tell you the sound I’ve achieved with the Echo Busters in the newly converted spare room is the same as what I hear in my main listening room, but I’m enjoying it just as much, if not more in some respects. The smaller room size has a cozier, more intimate feel to it, and so does the music. I know us reviewer types toss around the term “transformation” like it’s going out of style, but this truly was a transformation. And the cool thing about Echo Busters, as well as most other room treatment, is you don’t have to buy the whole shebang at once. I’d recommend perhaps starting off with a couple of Bass Busters or maybe just a set of Corner Busters. The effect is cumulative, and you can add on as your budget allows.

Instead of renewing your membership to the cable-of-themonth club this year, how about investing in what could turn out to be the most important component in your system—the room? You won’t be sorry. &