The Feickert Woodpecker was first introduced in 2008 and has gone through some performance upgrades and refinements over the past few years. In 2012–2013 the Woodpecker received a bearing update, a motor/controller/hardware/software update, and a user interface update. In the U.S., VANA acquired the distributorship for Feickert Analogue midway through 2013.

The Feickert Woodpecker is a belt-driven turntable with a proprietary-software-controlled DC motor. The design includes a quick-release sliding-armboard system capable of supporting a variety of 205–300 mm (9″–12″) tonearms. The chassis is 18.9″ wide and 15″ deep, and weighs 29.7 pounds. With its 13.2-pound platter the total turntable weighs in at approximately 43 pounds without tonearm. There are five pushbuttons on the front left top of the turntable near the platter. Three buttons allow speed selection (33/45/78), while the other two are for speed adjustments.

Representing new distribution, VANA Ltd. decided to differentiate its Feickert Woodpecker (along with its Blackbird and Firebird) from previous models by specifying that the aluminum top and bottom plates of the turntables be finished in a black-anodized brushed aluminum, and the main body be polished piano-black (with rosewood as a $500 optional finish). The High Inertia Platter has also become standard in all models from the stock Feickert Woodpecker ($6500) to the Blackbird ($9000) and top-line Firebird ($13,500). The these changes, in my opinion, make the ’table look beautiful. 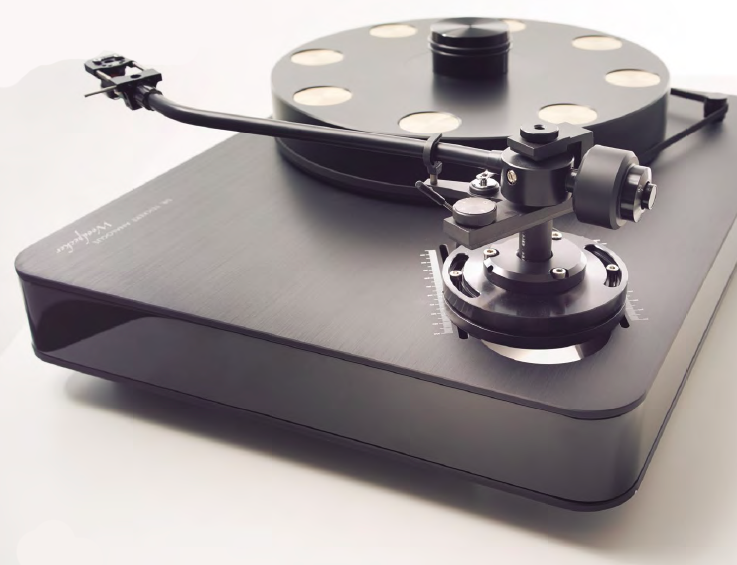 According to Feickert, the new bearing is inverted, designed to reduce contact area by 80% without reducing stiffness compared to the previous design, and has a flattened out area to reduce rumble significantly. According to the manufacturer and distributor, additional features of the bearing include spiral grooves to pump oil up into the bearing, and an included oil-release grub screw that allows excess oil to flow through, resulting in better motor/bearing interaction with tighter tolerances.

The High Inertia Platter is made of POM (Delrin) with eight precision-machined MS58 brass inserts along the outer portion of the platter to balance it and eliminate eccentricity. This additional mass also improves speed stability. The manufacturer states that the Delrin platters are pre-dyed before extrusion and double-tempered to reduce tension, then cut to 60mm (2.36″) in height and double-tempered again before machining to ensure the resulting platter (approximately 1.8″ high according to my calipers) is flat, round, balanced, and smooth-running. 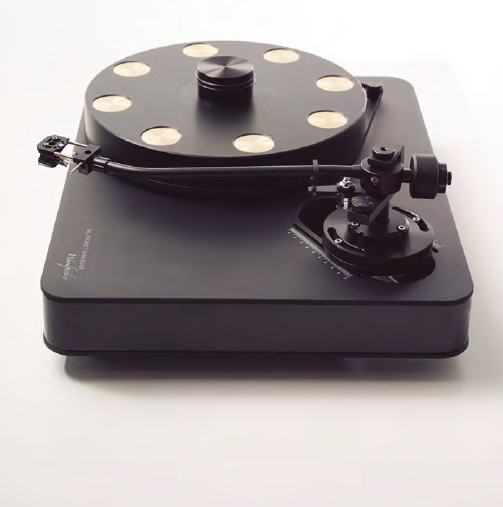 When the Woodpecker Package ($1500 option) is ordered, a 12″ Jelco ’arm and Acoustical Systems Arché headshell are included with the turntable. The Arché headshell allows standard adjustments for overhang and azimuth, but also includes an adjustment for the stylus rake angle (SRA) at the headshell. This SRA feature allows for more flexibility with tonearms that don’t have adjustable VTA at or near the pivot point of the ’arm. Additionally, if the tonearm seems to function best when the ’arm is closer to level, the Arché allows you to level it while at the same time providing SRA adjustment at the headshell. This feature can come in handy when using different cartridge/Arché-headshell combinations.

Rounding out my turnkey package were the Ortofon Cadenza Bronze and 6NX TSW-1010 tonearm cable ($2000 option). The Cadenza Bronze incorporates the same Ortofon Replicant 100 stylus used in the top Ortofons—including the MC Anna, MC A90, MC Windfeld, and Xpression—but uses a tapered aluminum cantilever instead of the boron one that these others have.

The Woodpecker package arrived in a double-boxed carton. After quickly checking the box for damage (there was none), I set it aside, unopened, until Stirling Trayle of VANA arrived a few weeks later to assist in setup. Assembly went rather quickly. Stirling has a system for alignment he’s been fine-tuning for some time that uses the Acoustical Systems SMARTractor protractor. He set up a custom UNI-DIN alignment that I could compare to a Baerwald alignment later when I changed cartridges. When the setup was completed and Stirling was happy with the sound, we declared it done.

Since I had an additional Arché headshell for the review, Stirling wanted to hear one of my cartridges before leaving, so we quickly and roughly mounted my van den Hul Colibri. (I said roughly because we ran into a snag that I’ll get to later.) Even with this rough mounting, I could clearly hear the characteristics of the Colibri through the Woodpecker, which gave me an early indication that the ’table seemed capable of providing a solid foundation to build an analog system around. 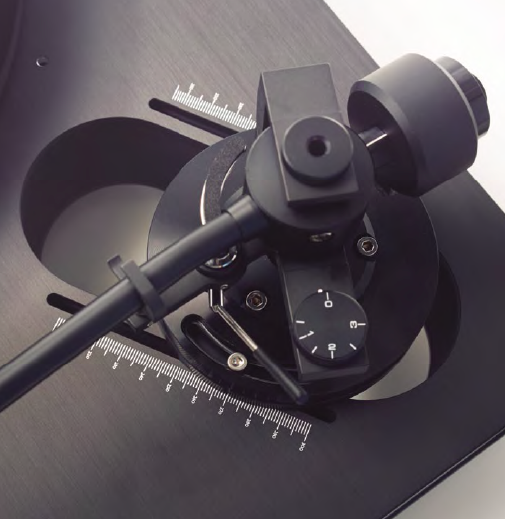 After a few weeks of listening to the Woodpecker/Cadenza Bronze combination, I changed the alignment for Baerwald instead of the UNI-DIN set during initial installation. This gave me the opportunity to take a close look at the SRA and adjust the headshell closer to the setting I prefer as a base starting  point when installing cartridges. To get to that starting point I needed to raise the SRA of the tonearm. As the Arché headshell only allowed near-level-and-lower SRA settings, I literally had to “raise” the rear of the tonearm (easy to do with the Jelco) to get the increased SRA I desired. With the Jelco tonearm raised several millimeters, I was able to set my new baseline.

With this new ’arm height and alignment, sonic results were surprisingly good. Looking back, I wondered what the UNI-DIN alignment might have sounded like with my new SRA setting, but I couldn’t go back to the original setup since I didn’t have a SMARTractor on hand. With this SRA-adjusted Baerwald setting, the Cadenza Bronze began to show traces of the richer tone color that only the MC Anna has prominently displayed in the Ortofon lineup. I listened to this combination playing back a variety of jazz, classical, pop, blues, and rock for several weeks. During this time, the Cadenza Bronze in the Woodpecker package proved to be quite enjoyable.

After putting the Woodpecker package through its paces with the turnkey cartridge/tonearm/cable option provided by VANA, I tried a series of tonearm cables I had on hand, and ended up preferring a Graham IC-70. This cable opened up the presentation and exposed more inner detail without any added harshness that I could detect. Most instruments took on a speed and clarity that proved the turnkey cable had been somewhat sluggish on initial attacks. With the Graham tonearm cable, the Woodpecker package, including the Cadenza Bronze cartridge, moved forward in performance by a noticeable margin.

After some time had passed, I installed my Lyra Skala on the second Arché headshell using the new baseline tonearm height I set for the Cadenza Bronze. With both cartridges in individual Arché headshells, I could easily switch between the two and maintain all set-up parameters except for quick tracking-force adjustments. This Lyra combination turned out to be a sweet spot in value because the cost of the cartridge didn’t exceed half the cost of the Woodpecker package but provided an increase in performance. With this setup I settled into a routine of long, nightly listening sessions without feeling the need to make any changes, enjoying the heightened performance of the Woodpecker package with the Skala in the system.

With the longer cartridge-mounting slots of the Jelco headshell, there was room to move the cartridge further back and achieve proper overhang. With the Arché there wasn’t. But because this is the Woodpecker and it has a quick-release sliding tonearm mount that allows adjustment of effective length, I simply increased the pivot-to-spindle distance another 2mm, which also increased the effective length required for setting overhang. I could now use the Colibri in the Arché headshell and complete a full alignment. The quick-release sliding-tonearm mounting feature of the Woodpecker adds both pivot-to-spindle and effective-length adjustability when used with a slotted headshell. 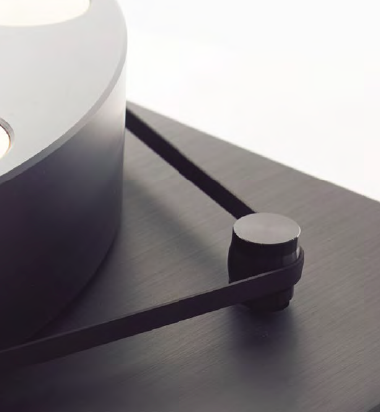 Once the ’table is set up properly, the Colibri’s sound character came through marvelously. Transients were very speedy with clarity that followed every note on any instrument. The Colibri’s slight reticence on instrumental decay—made more apparent by its surprisingly quick starts and stops—was easily heard along with the warmth (although softer and reduced in level when compared to other cartridges) of its low-frequency output. The Woodpecker package didn’t appear to impart any sonic signature that took away from the cartrdige’s strengths. I just sat and absorbed the lightning fast and near-limitless sense of speed the combination produced.

What was consistent after this round of cartridge swapping? Well, words like timing, drive, and pacing come to mind. On my not-so-special copy of Dire Straits’ Love Over Gold, “Telegraph Road” had good musical drive and foot-tapping timing throughout. The dynamics and togetherness of the performance were also excellent and cartridge-dependent. Moving on to the Mercury Living Presence recording of Chabrier’s España, the opening string pizzicatos and bowing were clean and clear with consistent reproduction of orchestral timing. Soft-to-loud passages were crisp, the soundstage expansive. Finally Herbie Hancock’s River: The Joni Letters provided an example of the Woodpecker’s ability to reproduce piano. On the title song, piano notes and lingering decays were solid and unwavering.

Although the performance of the Woodpecker had been really impressive throughout all of my listening sessions, I was also aware of the unit’s slightly higher noise floor vis-à-vis my own (much more expensive) reference turntables and ’arms. The rise in noise was subtle but noticeable, and is one difference that comes into focus when systems are designed to a price point. I believe the bearing design in the Woodpecker is remarkably quiet, so I would guess that the small increase in noise is most likely from the motor coupling to the single chassis plinth. I don’t really want to a make big deal about this, save to say that the difference can be heard (vis-à-vis more expensive analog source components) on really quiet passages at high volume on high-resolution systems. I should say that the higher noise floor never really interfered with my enjoyment of the music if I wasn’t listening for it.

This brings me to another area of focus. The Woodpecker is a solid one-piece design without built-in isolation from the listening-room environment. The manufacturer and distributor believe that design dollars, at this price point, are best spent on maximizing parameters they deem more important to playback. They feel that turntable isolation should be left to the user to address for his own situation. Speaking for myself, I ended up placing the turntable on a corner shelf that is effectively supported by the floor and two load-bearing walls. The Woodpecker sat on that shelf on a Neuance Isolation Platform that proved to be a near perfect fit. This approach provided enough isolation for my situation.

The Woodpecker Package has proven itself to be a very capable platform for vinyl playback. Its High Inertia Platter, updated drive system, redesigned bearing, quick-release sliding-tonearm mounting system, and Acoustical Systems Arché headshell combine to give the turntable solid and steady playback capabilities. The gorgeous VANA-specified finish adds beauty to solid baseline performance. If you are in the market for a turntable in this price range, you owe it to yourself to include the Woodpecker in that search. Given the Woodpecker’s ability to work well with cartridges far more expensive and capable than what would normally be installed, it could possibly serve its owner far into the future.