Like many high-end enthusiasts I gaze awestruck and envious at analog rigs the likes of TechDas, Continuum, Basis, Walker, Clearaudio. I do. It’s easy to be held in thrall with the moon-shot technology the engineers have thrown at these audacious vinyl-music machines, and the nosebleed price points they command. But let’s return to Planet Earth for a moment and recall that looks can also be deceiving and that performance is not always predicated on the number of zeros after the dollar sign. Case in point: the Volare from Dr. Feickert Analogue (DFA). Of classic good looks and prosaic dimension, Volare is a belt-driven, manually operated turntable. No kooky tricks or gizmos beyond forthright engineering and execution. And at $3495, pricing that’s well grounded.

Volare is best thought of as a downsized version of the good Doctor’s flagship Firebird. It’s a non-suspension design that includes a heavy, well-balanced aluminum platter coupled with a high-torque motor. Its chassis topology focuses on “high mass in the center of a bearing chosen for its stiffness and low friction.” Fairly conventional stuff. Conveniently the armboard is a quick-swap mechanism and fits Rega armboard cutouts. There is an optional SME adapter and an LP12 armboard, as well.

Fit and finish of this German-built turntable are excellent. The standard black and silver base is certainly handsome enough, but for those who want to dress it up a bit, upgrades include a Delrin platter ($250) and a wood-veneer plinth ($250). Operationally, Volare is a snap to use. Push-button speed (33, 45, and 78rpm) and speed-adjustment controls reside in the lower left corner of the base. Simply select the speed to set the platter spinning and press the button again to stop. The motor isn’t “high torque” in name only, either. The giveaway is whether you can apply reasonable force with a carbon record brush and stall the platter. Volare passed this test with flying colors, pulling like a locomotive. Equipped with aluminum footers and short adjustable spikes, it’s easy to level and fine-tune.

Mofi Distribution delivered the Volare as a complete package, which included a 9.5-inch OriginLive Silver MK3A tonearm and MoFi Master Tracker cartridge ($799). The tonearm is a traditional pivoted design consisting of a single-piece aircraft-alloy tube with special stub for improved counterweight rigidity. It uses high-grade internal Litz wiring. The package includes a phono interconnect with RCA plugs. The easy access cueing lever is light to the touch and very precise. The Master Tracker cartridge is a 47k-ohm moving-magnet design in an aluminum body. It uses a Micro-Line diamond stylus and outputs an ample 3mV. Its V-Twin dual-magnet motor employs two low-mass magnets aligned in a “V” formation parallel with the record grooves, a layout that mirrors the trajectory of the cutting head. Suggested tracking force is 1.8–2.2 grams. (As a side note I was impressed with the Master Tracker. It tracked cleanly, and traversed difficult passages laden with deep bass and large-scale dynamics with aplomb. Compared with my own mm reference, the Clearaudio Charisma, it’s not as flush with harmonic ripeness and is a little cooler on top, but it’s a very musical effort for far less than half the cost.) 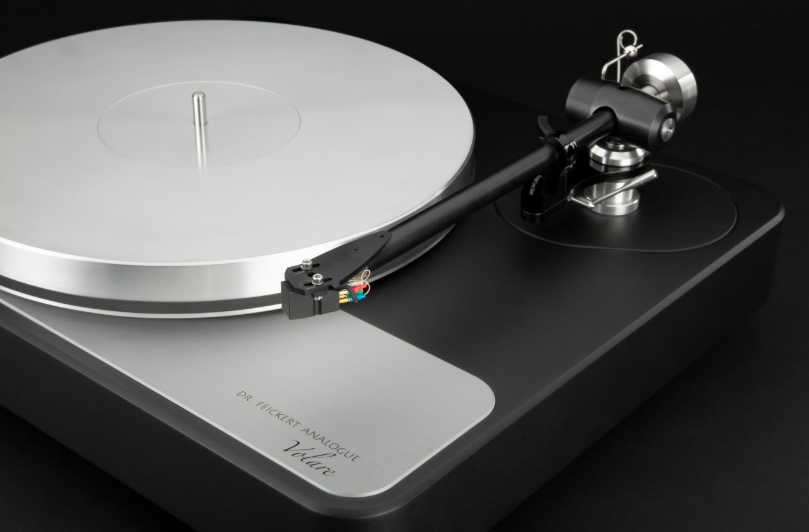 Setup was a cinch using the enclosed alignment card. Setting stylus overhang and tracking force was routine. Vertical tracking angle (VTA) settings for the OriginLive Silver ’arm called for a bit more dexterity, requiring the user to slacken the clamping nut beneath the ’table first, then adjust the height ring atop the armboard to the desired arm-tube height, using the alignment-gauge card as a guide. Once that checks out, the clamping nut may need to be re-tensioned. Unlike on-the-fly VTA adjustments that can be fully dialed in above the armboard (generally on more expensive turntables), this process was a little awkward. However, unless you’re constantly swapping out cartridges it’s not something you’ll spend a lot of time doing.

For my listening sessions, I used the Pass Labs XP-17 phono- stage ($4300, review forthcoming). Frankly it’s hard to imagine better results than what I got from this synergistic pairing. I’ve said repeatedly that turntables are (or should be) the neutral staging ground for everything that follows from the interface of the groove and stylus. Not only is speed stability a must but the entire assembly needs to be immune to internal and external forces, both mechanical and acoustic, allowing no resonances into the vinyl and stylus by way of chassis, plinth, and motor.

In performance Volare operated silently, with virtually zero motor noise at startup. The platter got up to speed swiftly. Winds of War and Peace, the Dave Wilson produced and Doug Sax-mastered recording, is a demonstration disc that has few peers. When you drop the stylus into the first groove of “Olympic Fanfare,” it’s like igniting a rocket on a launch pad. Pitch and image stability were solid, clean, and immovably fixed. Except for the analog tape noise of this vintage recording, the ensemble pauses and ambient silences were seriously quiet. The theme from The Cowboys soundtrack was a little dry on trumpet blasts, but there was terrific skin-sound and texture off the snare drum rolls. The loudest dynamic peaks were impressive, and mistracking was never an issue.

Piano recordings don’t lie. They challenge turntables like few other instruments in the orchestra. For example, Norah Jones’ piano during “The Nearness of You” was rock steady and elicited no sense of flutter or pitch instability. When pitch wavers, notes tend to blur into a wobbly tremolo during lengthy sustains and decays. The sensation is not unlike a prescription for reading glasses that’s just enough off that you can still make out words fairly clearly, but after a while begin to fatigue you due to the added effort of trying to make everything snap into focus. Low-level information was imparted with sensitivity and resolve; when Jones’ sings “Lonestar,” the inner details of her harmonies and vibrato were captured as if they were gift-wrapped in halos of air.

The summit of analog recording was and arguably is the direct-to-disc format (D2D). It can produce a combination of dynamics, transient speed, transparency, and immediacy that is only approached in fidelity by a mastertape. Not a single turntable passes through my listening room without having had to track a direct-to-disc. From the instant I cued up Retrospective, the Deutsche Grammophon D2D of violinist Hilary Hahn (accompanied by pianist Cory Smythe) in a program of Mozart, Schoenberg, and Ives, et al., it was obvious that the Volare was an analog deck of low coloration and high resolution. Recorded live in concert in Berlin, this LP revealed a turntable rig of unwavering stability, one that reproduced dimensional cues and venue ambience in ways that reminded me of some of the top-flight rigs I’ve heard in the past. Its placement of Smythe’s piano, positioned slightly upstage and to the left of Hahn’s closely mic’d violin, put me in the mindset of an audience member listening to the live event. The clarity of the dynamic window and the relative ambience surrounding each instrument brought the differences in distance and microphone placement into sharp relief.

Volare also laid claim to excellent channel separation during Yes’s 90125 tracks “It Could Happen” and “Owner of a Lonely Heart.” 90125 is a prog-rock recording where ping-pong voice panning and disorienting swirls and sweeps of instrumentation and effects are the sonic equivalents of a funhouse mirror. Aboard Volare, recordings such as this one imparted a freshness and immediacy akin to that of pressings stamped earlier rather than later in the production run—quieter, quicker, more alive.

Another album that sang with D2D-like immediacy was Lo Que Dice Mi Cantar (What My Singing Says) [MUX101-VLP]. The album honors the art of Cuban trova, a poetic root music, typically sung by itinerant, informally trained musicians or trovadores, that originated in the 19th century. Performed on this 180-gram LP by the female group Trio Palabras, accompanied by guitars, tres, laud, acoustic bass, and percussion, the songs were recorded in single-take tracks, with no editing or overdubbing—rarities in and of themselves. The guitars were widely spaced, with unique textural personalities ranging from fingernail percussiveness to muted pizzicatos that seemed to extend past the edges of the loudspeakers. String transients were quick and crisp but not disagreeably glassy or etched.

Does Volare have any weaknesses? In its price segment, few. Top-tier ’tables, however, are more stable in imaging; their silences are darker, their dynamic and tonal contrasts wider and better resolved. Critically, they are also much more resistant to acoustic or mechanical feedback.

This was an area that was a disappointment. During playback it only took a tap on the Volare plinth or my old Polycrystal platform to elicit an ugly thump through the system. A good isolation base along the lines of my reference Critical Mass Sotto Voce turned out to be the solution.

As I see it, the Dr. Feickert Volare’s primary role for many might be as great upgrade from a starter turntable. For others it might be the aspirational end of the line. And that’s fine, too. In either case Volare has the essentials down pat, and possesses a musicality, stability, and solidity that few other LP rigs in the $3k ranks offer. It’s not for me to say whether great LP analog reproduction cures all ills, but this could be one time that it’s a good idea to listen to the Doctor. Volare might be just the prescription you need.