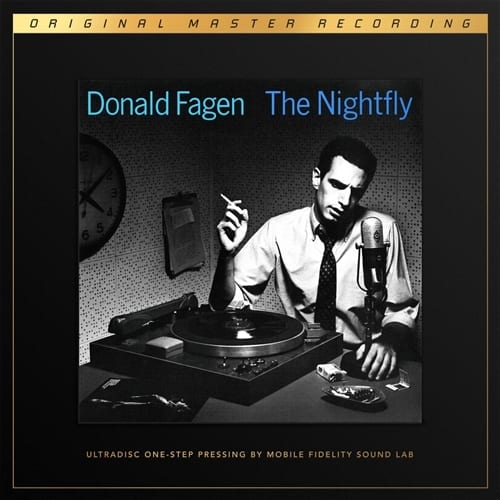 After its 1982 release, The Nightfly—Donald Fagen’s solo debut following his split from Steely Dan partner Walter Becker—racked up seven Grammy Award nominations. Widely acclaimed for its vivid lyricism, the album is a nostalgic homage to Fagen’s youthful memories of the 1950s, with sly references to the era’s jazz and pop culture. The wistful title track imagines a lonely DJ ruminating on isolation. But the tone of the album is set by the hit single “I.G.Y. (What a Beautiful World),” an optimistic look at the future through the innocent eyes of a 1957 scientist. The album was one of the first fully digital recordings and has been released on several hi-def formats. Most recently, MoFi has issued The Nightfly on a pair of 45rpm UltraDisc One-Step platters in a sturdy limited-edition box set. The impressive UltraDiscs use original master recordings and remove two steps from the standard plating process to reveal more musical detail and eliminate surface noise. The result is remarkably quiet discs rich in detail, with shimmering highs and punchy bass. The clarity propels the perky rhythms that permeate such songs as “New Frontier,” “Ruby Baby,” and the ebullient “Walk Between the Raindrops.”

Insights from AXPONA 2018 part one