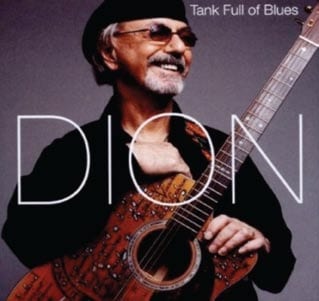 What’s an Italian-American boy from the Bronx doing singing the blues? Telling the tales of his life, and reinvigorating a career that never really ended. Dion DiMucci started in 50s doo-wop with the Belmonts, and scored more than a dozen Top 40 hits, including “A Teenager in Love.” The group was part of the 1959 Winter Dance Party, that fateful tour where Buddy Holly, the Big Bopper, and Richie Valens died in a plane crash. Dion turned down the chance to fly that night, because it would have cost him $36—a whole month’s rent—and Valens took his seat instead. He went solo in 1960 and struck gold with “Runaround Sue” and “The Wanderer.” Doo-wop fell victim to the British Invasion, and Dion disappeared from the charts for a while. He made a brief comeback in the 70s with more easy listening, contemplative ballads like “Abraham, Martin and John.”

That’s the Dion you probably remember: the famous 50s singer whose tunes and harmonies influenced musicians like Bruce Springsteen and Paul Simon. But there’s more to his story. Struggles with record companies kept him from succeeding with the records he wanted to make. He got clean from heroin addiction and recorded a series of gospel albums, including 1985’s Grammy-nominated I Put Away My Idols. The Rock and Roll Hall of Fame inducted him in 1989. Still he’s never stopped writing, recording, or performing the music he loved: the blues. His last couple of blues albums brought him back into the spotlight once again, and he earned another Grammy nomination for his 2006 album Bronx in Blue, an acoustic tribute to the genre and its famous players.

Tank Full of Blues contains mostly original songs, written in the traditional blues style with lots of three-chord walking grooves and sexy, slightly raunchy “Hoochie Coochie Man” songs. While Dion’s voice has weathered slightly over his 72 years, it’s perfect for this music. His guitar playing will simply blow you away, not because it’s fast or showy, but because it’s just right, every time. Throughout the album, the sound is very natural with minimal overdubs, allowing plenty of space for his gritty, stinging, slightly distorted guitar riffs and the nimble yet rock-solid bass and drums.

Clearly, Dion is haunted by blues music and the musicians both obscure and famous who created it. Yet his best tracks don’t follow the standard blues formulas. “I Read It (In The Rolling Stone)” is more low down and dirty, with lyrics about a man who simultaneously desires, disdains, and fears fame. It’s a tale of someone who’s had it, lost it, wants it back but knows he’d best steer clear. “Ride’s Blues (For Robert Johnson)” conjures up an imaginary conversation between the singer and Johnson—two bluesmen talking about their hard times across the decades. “Two Train” is a medley that incorporates Muddy Waters’ “Still A Fool” and Robert Johnson’s “Ramblin’ on My Mind.” The album’s final track, “Bronx Poem,” is a spoken word semi-rap that, in lesser hands, could have turned far too sentimental, but Dion makes it a prayer of remembrance and gratitude. All told, Tank Full of Blues is an eloquent and moving tribute to the roots music he so dearly loves.