On March 3, I had the pleasure of attending Music Matters 11, an “audio open house” of sorts, hosted by Definitive Audio, Seattle’s largest high-end audio retailer. Six listening rooms were set up with two-channel systems of various price levels, and plenty of catered food and beverages were available for the 400-odd(!) attendees. I have attended a few Music Matters events there in the past, and I have to say, this year’s offering was more enjoyable than the others. Even though there were a limited number of seats in each listening room and folks had to queue up to get into the various demonstrations according to a fairly strict presentation schedule, I thought the overall mood was enthusiastic and upbeat.

The quality of the demonstrations was quite good—better than the average trade-show experience—as well it should be, given that Definitive has its own optimized listening rooms, more staff, and more time to really get the systems set up properly than is typically the case at a trade show. Because some of the demo gear was brand new and had arrived only a day or two before, I assume there must have been some setup challenges. The manufacturers’ reps kept their respective spiels short and sweet and, instead, focused on playing interesting music to showcase the various systems. Unlike one of the past Music Matters events, at which the music selections were mostly studio-recorded pop affairs, this year’s event covered a balanced mix of classical, jazz, and pop. This gave attendees a sense of the various systems’ respective capabilities of playing back large-scale music versus more intimate music, in addition to reproducing the sound of acoustic instruments.

I will briefly describe the demo systems and list their components and pricing below, but first let me give you a little background about Definitive Audio and how it has been thriving in spite of the current trend of retail shop closures. It is, in fact, celebrating its 40th anniversary, so it must be doing a few things right. Definitive has moved to larger locations over the years and added two additional stores since it first opened in 1975 right in what was sometimes called “stereo row.” (For several years, there were many stereo shops along about five blocks of Roosevelt Avenue near Seattle’s University District.) Definitive went from a fairly small, single-demo-room shop to a three-room one, then to its current six-room location, also in the same neighborhood. It opened another branch several years ago in Bellevue (just east of Seattle) and also acquired Advanced Audio, a well-established audio retailer in Tacoma (about 35 miles south of Seattle). CEO Mark Ormiston and President Craig Abplanalp told me Definitive has managed to grow and prosper, despite heavy competition from internet sales over the past 15 years, by sticking to a well-considered approach:

Read on below for detailed descriptions of the demo rooms. (Note that any items below without a price are so listed because no price info was made available to me.)

Room 1: Wilson Audio Alexx speaker, ($109,000/pr.); D’Agostino Momentum preamplifier line stage ($35,000), Momentum phonostage ($28,000), Progression mono amplifier ($39,000/pr.); Merging Technologies NADAC DAC ($10,500); Audio Research CD6, used as transport ($9000); AMG Viella 12 turntable with Clearaudio Goldfinger Statement; Transparent Opus XLR phono cable, speaker cable, power cords, PowerIsolator Reference; HRS MXR rack with R, S and, M series platforms. This system sounded big, commanding, and vibrant. It recreated a large soundstage with solid images and had great dynamic presence on both digital and analog sources. Wilson Audio’s sophisticated and entertaining Peter McGrath (pictured above) played some of his own excellent digital recordings through the Merging Technologies NADAC DAC, represented on site by Philip O’Hanlan of On a Higher Note. Merging Technologies is a relative newcomer in the high-end home-audio scene but, apparently, is an established marque in the pro-audio recording and mastering niche. The Wilson Alexx speaker, a seemingly smaller-scale XLF model (or an larger-scale Alexia), was a public debut and did not disappoint—a thoroughbred Wilson from the get-go. It will be interesting to see how the $109k Alexx fits into the market. The D’Agostino Progression mono amp (800 watts into 8 ohms!) also represented a public debut—in fact, that very pair was apparently just completed a day or two before the demo. Dan D’Agostino (pictured below) was on hand to introduce his new, beefy baby and also his new, highly user-adjustable phono preamp. I hesitate to ascribe any particular sonic attribute to certain components of the system, but from the AMG turntable, Audio Research CD6, and NADAC sources through to the Wilson speakers, this system sounded fantastic. 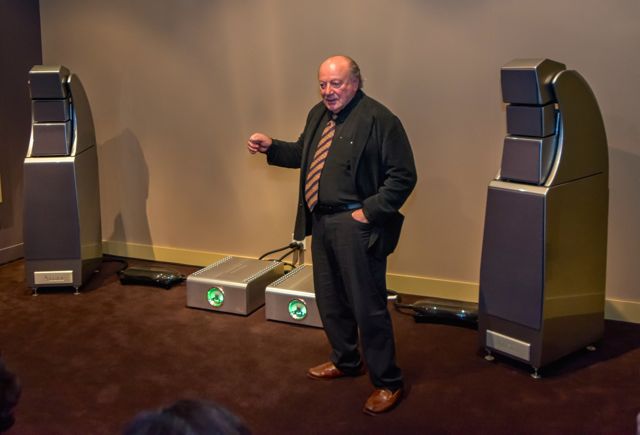 Room 2: B&W 800 D3 speaker ($30,000/pr.); Classé CP-800 preamp/DAC ($6,000), CA-M300 mono amp ($11,000/pr.); Rotel RCD-1570 CD player (used as transport, $999); AudioQuest Niagara 7000 A/C power conditioner ($7,995), WILD XLR, speaker cable, power cords, prototype power cord (for Niagara 7000); Finite Elemente equipment rack. This system also displayed large sound. Bass extension, power, and dynamics were impressive, as were its pleasing overall tonal balance, fine resolution, and finesse. Dave Baker was on hand from B&W to show off the company’s brand-new 800 D3 full-range floorstander. Baker said the 800 D3 model is almost an entirely new speaker, having only a handful of parts carried over from the previous 800 Diamond model. It also displays a more svelte appearance, and the yellow midrange cone of the two previous 800 models is now very light gray or a silver-like color. AudioQuest’s Garth Powell introduced the brand-new Niagara 7000 power conditioner that not only filters noise on the A/C line but also includes a reserve capability to provide additional power delivery during demanding music peaks. AudioQuest will offer a complete line of related power products ranging in price from about $1000 to $8000. Classé’s Dave Nauber introduced the CP-800 preamp/DAC and CA-M300 mono amps, both of which struck me as quite reasonably priced, given their features, power output, and apparent sound quality (within the context of the demo system). This setup played all kinds of music with aplomb. Full-range, full-tilt music just sailed through and intimate music was also beautifully reproduced. All around, a musically satisfying system. 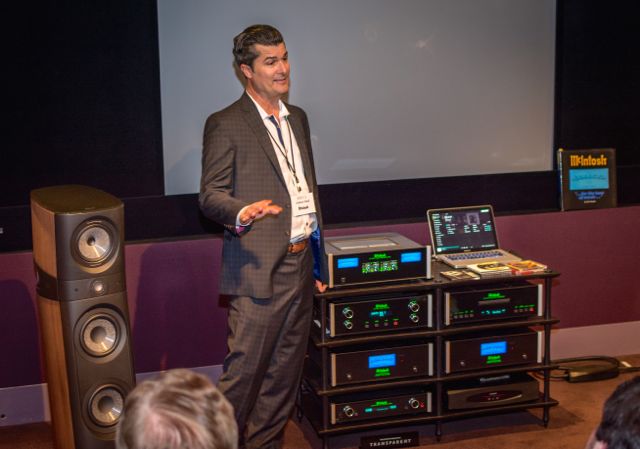 Room 4: Focal Sopra No. 2 speakers ($13,999/pr.); McIntosh C1100 preamp ($6500), D150 DAC ($3000), MCT450 transport ($4000), and MC301 mono amp ($10,000/pr.); Transparent Cable Ultra XLRs and speaker cable, PI8 line conditioner, Premium power cables; Quadraspire SVT2 stand. This system delivered commendable—and in some ways, competitive—performance for a lot less money than the preceding three systems. The system sounded dynamically alive and impactful, revealing but not strident, and had beautiful tone colors. The affable and knowledgeable Matt Reily, from Focal’s U.S. distributor Audio Plus Services, was in attendance to introduce the Sopra 2 speakers, and Andrew Ward (pictured above) introduced McIntosh’s tube preamp and DAC and solid-state mono power amplifier. I thought the McIntosh tube/SS combo partnered well with the Focal speakers. Transparent’s Josh Clark (pictured below) mentioned that the entire power conditioner and cable setup used in this system retails for roughly $5000 (if I recall correctly), which is not unreasonable, given the number of pieces involved and current “specialty audio” market pricing. The system projected a very wide and reasonably deep soundstage. It also allowed a respectable level of fine detail to come through. Fantastic sound, especially considering its total retail price. 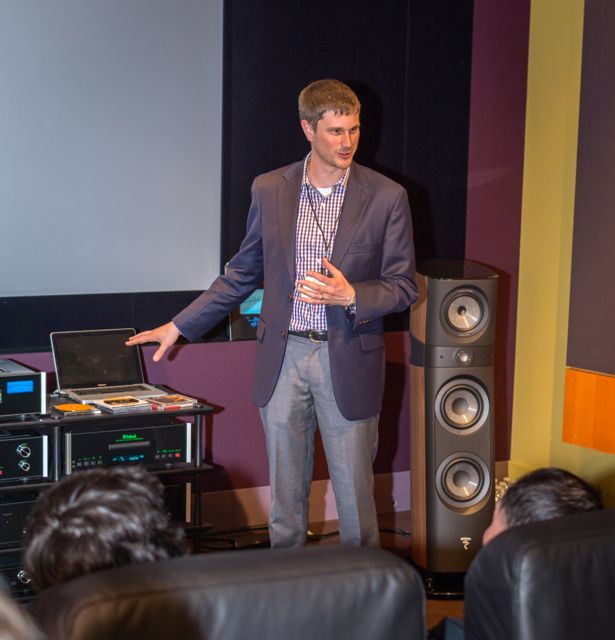 The real surprise of the event was the delightful and quite full-sounding—and much cheaper—Rega system demonstrated by Sound Organisation’s David Carr in Room 6: RX5 speaker ($2995/pr.), Elicit-R integrated amp ($2995), Apollo-R CD player ($1095), RP6 turntable ($1495); AudioQuest Niagara 1000 line conditioner ($995) and signal and power cables; and Quadraspire SVT2 rack. For under $11,000 (including the cabling and rack), this system was legitimately satisfying, and provided a good example of the high-end ethos of delivering meaningful and fulfilling musical experiences for less than stratospheric prices. This all-Rega system made me want to just sit back and listen to the musical performances. I sort of liked its unpretentious appearance, too. The RX5 speaker has two side-firing woofers and a front-firing port, so it can be placed close to a wall and still function well. The bass was notably full—although not as clearly defined as I am used to, but I suspect this could be improved upon with some careful positioning adjustments. The system did not come across as overtly polite, in the traditional British wane from perhaps a decade ago or so. This relatively humble system was, in fact quite engaging and alive-sounding. It imparted a healthy helping of “musical nourishment,” if you will.

Unfortunately, I ran out of time and did not get the chance to listen to the Linn demo system in Room 5: Series 530 speakers ($19,200/pr.), Akurate DSM streamer/preamp ($9200), Majik LP12 turntable ($4320); Quadraspire SVT2 rack. This system was disassembled within a day or two of the event, and I couldn’t return to Definitive to hear it for myself within that limited time frame. (My apologies to Linn.) There were also headphones and associated amplifiers available for audition: Audeze The King headphone amp, Deckard amp, LCD2/4/4/X and EL-8 headphones; Ayre Acoustics Codex amp, McIntosh MHA100 amp, MHP1000 headphones; AudioQuest Nighthawk headphones. Due to time constraints, I was unable to listen to any of those.

I was heartened by the strong turnout and the general enthusiasm at this year’s Music Matters event. The variety of demo systems and the presence of the manufacturers’ reps introducing their own gear—rather than the Definitive sales staff—helped increase awareness of the quality brands presented at the event. It also felt less like a veiled sales pitch than a “get acquainted” opportunity among all groups: the public, Definitive, and the manufacturers. In this age of so many interactions carried out via electronic devices with screens, these sorts of “open house” events are good opportunities to have honest-to-goodness direct human contact—with high-quality music reproduction at the center of it all. Definitive has most likely gleaned some lessons learned from past events: The food and drink did not run out, the focus was on music reproduction and system possibilities rather than on pricing, and the reps were informative without sounding overly mercantile. I hope everyone benefited from the considerable efforts required to put the event together. Right before a demo was about to begin, one of the reps commented something along the lines of, “We don’t get this kind of attendance and interest even in New York City.” Definitive did a great job, and Seattle showed up in force.

The following is a press release issued by AudioQuest. April, […]

The following is a press release issued by MSB Technology. […]