Definitive Audio and Linn Products Host “The Playlist with Vinyl Me, Please”

One of the oldest and most successful high end audio retail stores in Seattle, Definitive Audio, hosted a music listening event on July 25 along with Linn and a new vinyl subscription company (remember the Columbia Record Club or the RCA Victor Record Club?) called Vinyl Me, Please. The focus of The Playlist event was decidedly on music—the artists, the musical context, and the contrasts or connections among the songs—and not on the playback gear. This was a welcome change from most trade shows and even some other retail store events. Naturally, attendees were curious about the gear, but the affable and energetic presenter, Linn’s Michael O’Rourke, saved discussing the gear until the end of the listening session and then only to briefly name each piece in the system: Klimax System Hub paired with Klimax 350 powered speakers ($82,900 Hub and 350s combined) and a Klimax-level LP12 turntable ($25,260). Cabling was standard Ethernet and what looked like stock power cords.

Each song was colorfully and enthusiastically introduced by O’Rourke with a bit history about the artist and how the song was created. O’Rourke has a flare for highlighting some of the drama behind each song, and his intros helped me appreciate the listening session all the more because of it. The evening’s playlist: Al Green, Call Me, “Call Me”; Moses Sumney, Aromanticism, “Don’t Bother Calling”; Nils Frahm, Spaces, “Hammers”; Glass Animals, How To Be A Human Being, “Poplar Street”; Sister Rosetta Thorpe, Gospel Train, “Jericho”; Flying Lotus, Cosmogramma, “Galaxy in Janaki”; Feist, Let It Die, “Mushaboom.”

Each LP came from a Vinyl Me, Please subscription, which is available in three genres called “tracks”: Classics, “the best soul, blues, and jazz”; Essentials, “must-haves across genres and eras”; and Rap & Hip Hop, “From old school to SoundCloud.” You can subscribe at three different term lengths, too: $81 billed every 3 months; $150 billed every 6 months; and $299 billed annually. Vinyl Me, Please is also apparently flexible about which records you accept. “Each month, you’ll receive an e-mail about our next Records of the Month. Not feeling our selection? Simply swap to get a record you know you’ll love.” More information about Vinyl Me, Please can be found at vinylmeplease.com. 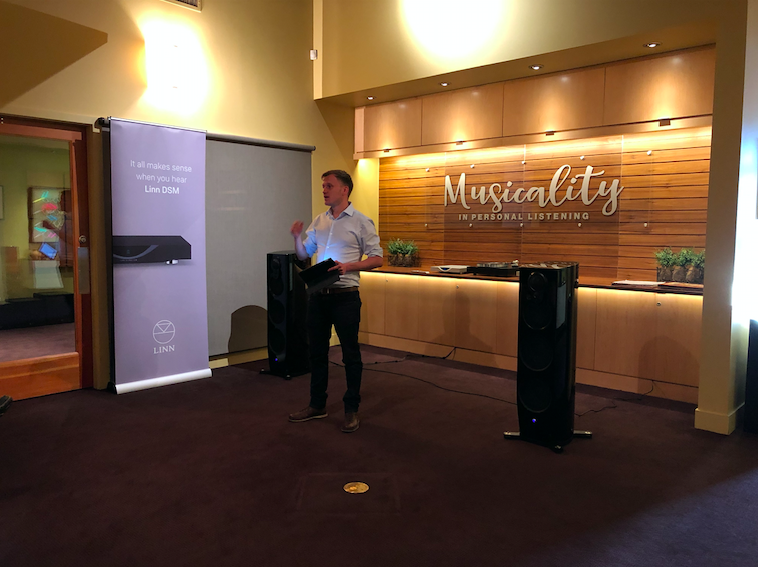 O’Rourke also invited those who had brought their own LPs to come up and introduce and then play a cut of their choice. Four attendees got up in front of the crowd of strangers and gave a brief talk about his selection. (There were no her selection-takers.) O’Rourke commented on just how informative, personal, and well-presented these intros were, not the usual curt, reluctant comment. One selection struck me as particularly beautiful, a 45rpm remix of Björk’s “Family” from her Vulnicura album—yet another instance of a group listening session that became partly a music discovery session.

The sound quality of the main Linn system was fairly good, considering its off-center position in a large room that wasn’t designed or set up for serious listening. The real ear-opener for me, though, was a brief listen to a much cheaper Linn system from the Selekt range: Selekt DSM integrated amp ($5200 to $8625, depending on options), Majik 140 speakers ($2995), and Majik-level LP12 turntable ($4320). This smaller system played wonderfully alive and enjoyable music. I believe for many music lovers it represents better value than the full-on Klimax system—better “bang for the buck” or “punch for the pound,” as the case might be. All Linn systems come with Linn’s proprietary “Space Optimisation” room-correction technology, including the less costly Selekt DSM.

This was a nice event and made for an enjoyable evening. Seattle’s Definitive Audio has hosted similar gatherings, such as the well-known “Music Matters” series, and it has done a great job, especially in recent years. I wasn’t able to stick around to ask how other attendees felt about the evening, but I certainly had a good time, and it looked like others did, too. Congratulations to Linn, Vinyl Me, Please, and Definitive Audio in Seattle on a successful event. Nicely done.