David Chesky’s comic opera, La Farranucci, was performed on March 15th and 16th at the Brooklyn Music School Playhouse and I had the good fortune to be there. Actually, all of us in the auditorium were lucky to be there, as La Farranucci had been designated “offensive” last year and the premiere originally planned for June of 2018 at the Brooklyn Academy of Music (BAM) had been unceremoniously cancelled. What does it take for an opera to be censored in hipster Brooklyn? A theater full of intrepid culture warriors, including an audio writer or two, wanted to find out.

Chesky is among the most tirelessly versatile individuals with connections to high-end audio that I know of. With his brother Norman, he founded the audiophile label Chesky Records in the mid-1980s after meeting the pianist Earl Wild and identifying a need for sonically superior reissues of “Golden Age” RCA Shaded Dogs. In 2008, the brothers established HDtracks, arguably the most comprehensive source of high-resolution downloads on earth. But David Chesky’s long and successful music business experience can be viewed as a mere side note to his wide-ranging career as a performer and composer. 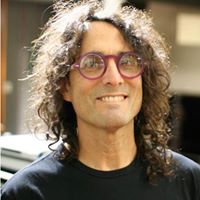 As a child growing up in Miami, Chesky took piano lessons and early on developed a taste for jazz and classical genres. Moving to NYC in 1974 at the tender age of 17, he studied privately with the Pulitzer-winning composer David Del Tredici as well as with John Lewis, the revered pianist for the Modern Jazz Quartet. He formed the David Chesky Big Band, a group that included Michael and Randy Brecker, and wrote music for films, television, and commercials. He recorded both his original jazz and classical compositions for the Chesky label and saw his visibility steadily rise as he produced dozens of vital orchestral compositions, concertos, keyboard works, and pretty much every other musical form. Chesky has won two Independent Music Awards, a Latin Grammy, and received a Grammy nomination for Best Contemporary Composition, for his Bassoon Concerto.

La Farranucci is the latest of Chesky’s five operas, which include a children’s opera, The Mice War, among others. A vastly entertaining two-act work with a running time of around an hour and a half, his most recent stage work tracks the sad tale of a struggling opera company trying their best with strained resources to produce a less-than-inspired 18th century opera that sounds like second-rate Mozart. (A consistent delight of Chesky’s music over the years is an uncanny ability to discreetly and affectionately allude to earlier composers, from Bach to Stravinsky. In addition to Don Giovanni, La Farranucci confidently references Kurt Weill and other musical strains.) I won’t attempt to detail the absorbingly convoluted plot but…well, let’s just say that many elements of the story and the production were viewed as so provocative—sexually, politically—that BAM pulled the plug. The controversy wasn’t bad for business: The Brooklyn Music School venue on Saturday night was full.

The dramatis personae include a preening star baritone, a rotund shrieking soprano, a self-aggrandizing Director, a nouveau-riche, musically illiterate Board Chairman given unfortunate artistic control, and other “types” well-known to those in the classical music universe. But the central character is Chuck, the “Hippie Composer” who keeps pestering the Director to listen to his unheard opera. Finally, with La Farranucci disintegrating before his eyes, the Director impulsively passes out the musical score to the singers and orchestra and, for the first and only time in La Farranucci, the frantic pace is interrupted as something profound is expressed and, for once, art supplants commerce. The Hippie Composer’s music is exquisite—radiant, soulful, intellectually and psychologically substantial—and very reminiscent of David Chesky’s own musical syntax. The Director breaks off the audition citing a need for a stage work that’s more gratuitously scandalous (and will sell more tickets). Chuck is advised to raise cash on his own to finance his musical projects and the next thing we know, the composer’s been busted for making a pornographic film.

Released from prison, Chuck reinvents himself as a munitions dealer and becomes a multibillionaire. He buys the opera company that once rejected his work, and guts the entire operation, firing everybody. He embarks on a new work for the digital age—the theater becomes a venue for live video game competition. At the real-life Brooklyn Music School Playhouse, La Farranucci ends with assaultive electronic music, flashing lights, and four drones flying around the stage. What David Chesky seems to be telling us, from the unique perspective of his own accomplished career, is that while establishing a viable commercial platform for developing enduring art is utterly necessary, the risk is losing what is most precious to the art we need to create—the capacity for one human being to connect to another in a spiritually authentic fashion.

La Farranucci is headed to Berlin for a couple of performances and then…who knows? The staging I attended was filmed and recorded and, the limitations of a live video recording notwithstanding, I’d love the opportunity to experience the work again. If that happens, I’ll be sure to let TAS’ constituency—and many have been David Chesky’s constituency as well, one way or another—know all about it. We can claim him as one of our own.