During my visit to Washington, D.C., in 1998, David Berning invited me to drop by his house in nearby Potomac, Maryland. At some point during that evening he pulled out a prototype, which he described as a low-power and low-cost ZOTL amplifier. David was eager to offer his impedance-conversion technology in a highly affordable product. When he finished describing the device, I suggested that it would make for a perfect headphone amplifier. Sure enough, when it was released in 2000 as a “personal amplifier,” it included a headphone input. When I reviewed the microZOTL some 15 years ago I concluded that its greatest potential was as a headphone driver for both low- and high-impedance designs. My opinion then was that it ran circles around headphone amps costing thousands of dollars. Sadly, the microZOTL was discontinued in 2007. It remained up to Mark Schneider of Linear Tube Audio and his distribution website, urbanhifi.com, to re-issue the microZOTL under license from Berning as the microZOTL2.0 reviewed here.

The microZOTL2.0’s internal circuitry is identical to that of the original, but there are some significant differences. The power supply is now outboard which reduces noise. Functionality has been enhanced in the form of preamp outputs, a second line-level input, and a selector switch that toggles between the two inputs. Premium tubes (Russian Tung-Sol reissue 6SN7 and 12AT7) are now standard instead of the Chinese tubes of the original. In general, parts-quality has been enhanced and the unit includes an Alps volume pot and silver-coated and Teflon-insulated copper wiring. And there’s no question that the microZOTL2.0 improves on the cosmetics of the original. 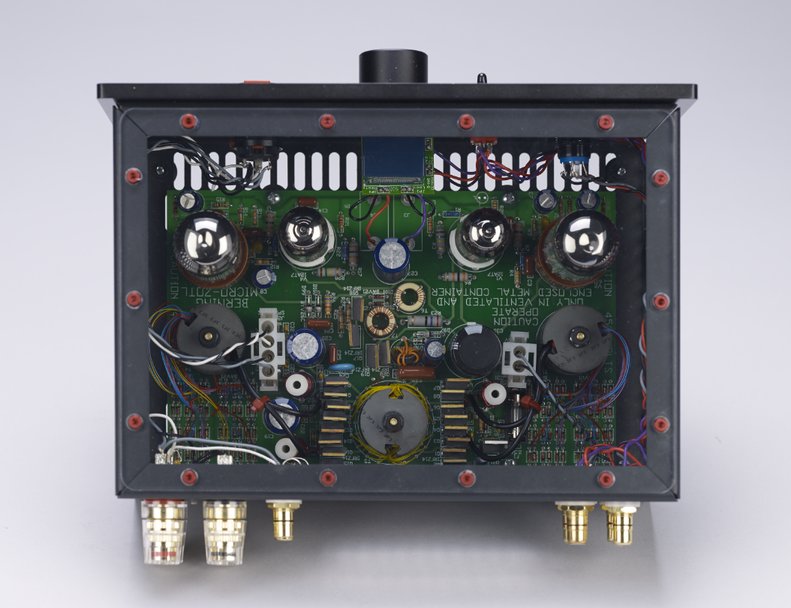 Go ahead and peek through the plexiglass top plate at the main circuit board and marvel at the circuit complexity. The microZOTL2.0 is configured as a Class A push-pull power amplifier. What is most unusual here is that the power tubes for each channel are the twin sections of a 6SN7. As far as the front end, one section of the 12AT7 input tube is used as a voltage amplifier while the second section is connected as a cathodyne phase-splitter. The output of each 6SN7 half is superimposed over a 250kHz RF carrier and transformed through an RF-converter transformer to obtain the high-current and low-impedance domain required by a loudspeaker. The advantage gained is that, unlike a conventional audio transformer that must operate over a wide bandwidth, the RF-converter transformer operates at a single frequency and can therefore achieve an extremely high turns-ratio without adversely impacting the power bandwidth. According to Berning, the microZOTL2.0’s effective turns-ratio is an enormous 168-to-1, making it possible to use a triode (normally only seen in amplifier input or driver stages) in the output stage. The resultant output impedance is 2 ohms with zero global feedback. Of course, the carrier frequency is filtered to the tune of 50dB before reaching the output terminals. Power delivery is a nominal 1W into a 4-ohm load.

My first instinct when surveying the microZOTL2.0’s enhanced functionality was to use it as a basic line preamp. It didn’t take me long to hook up a DAC to Input 1 and a phonostage to input 2. I asked David Berning about the expected voltage gain when driving a power amp, typically a 50k-ohm input impedance. He thought the microZOTL2.0 would offer a bit more than the specified 12.4dB gain into a 14-ohm load. That’s more than enough for any digital source and should suffice for a moving-magnet phonostage with a gain of 45dB or more. David did caution that the power amp should be turned on last and turned off first in order to avoid a low-frequency thump. Then there is the 2-ohm output impedance. That’s significantly lower source impedance than that of any preamp on the market, even those incorporating a cathode-follower output buffer. The payoff is the ability to drive long cable runs with no worries. It’s not just about output impedance but also about being able to sink current into the cable, and that the microZOTL2.0 does very well by virtue of being a miniature power amplifier.

At the 2015 RMAF I was surprised to find out that Mojo Audio’s Benjamin Zwickel instincts were aligned with mine. He was using the microZOTL2.0 to drive David Berning’s latest power amp, designed for Linear Tube Audio, the ZOTL40, which features a 40Wpc, EL34-based, push-pull output stage. In my setup, the microZOTL2.0 was coupled with the VTL Manley Reference 100/200 monoblocks and the Analysis Audio Omega planar loudspeakers. In this context I could only marvel at its explosive dynamics. The range from soft to loud was negotiated with a world-class startle factor that exceeded the performance of the Audible Illusions L3A line preamp, and if memory serves me right, actually equaled the performance of the much-more-expensive Pass Labs XP-30 preamp in this regard. That made the microZOTL2.0’s presentation visceral and involving, impossible to ignore. And as it turned out, it was far from being a one-trick pony. Bass response was spectacularly solid, extended, and pitch-perfect. And there was no denying that soundstage transparency bettered that of any tube preamp I’ve auditioned under $5k. The microZOTL2.0 was able to dig into a mix and resolve a complex passage with great precision. And that was a function of its excellent control over transient attack and decay. Its tube character was evident in its ability to do justice to spatial depth and width perspectives. That has been a weak point of solid-state designs and one of the reasons I’ve stuck with tube preamps for the past several decades. I suggest that you give the microZOTL2.0 a serious listen. It unzips the soundstage, allowing its boundaries to surge and expand with conviction. The upper midrange is smooth and free from tube brightness. However, the treble range sounds a bit electronic in character, lacking the textural purity of the midrange. My first thought was to categorize this as an artifact of the carrier frequency, especially since in more recent ZOTL designs Berning has deemed it important to raise it from 250 to 500kHz. But since I did not experience this problem during my headphone listening sessions, I’m inclined to think that the culprit is the VTL amp, which may be sensitive to the residual carrier frequency.

For someone who doesn’t listen much to headphones, I happen to have a fair number of them on hand. My favorite in the circumaural category are the Sennheiser HD 600 cans, mainly because of their excellent tonal balance and smooth presentation. The microZOTL2.0 pushed the HD 600 to a performance level I had not previously experienced. Prior to the microZOTL2.0 I had used the HD 600 extensively with the Antique Sound Lab MG-Head OTL 32 DT headphone amplifier. This is an all-tube OTL design, which uses a pair of triode-connected 6BQ5/EL84 pentodes per channel in the output stage. The sonic result could best be characterized as being overly tube-like: a nice fat lower midrange combined with a noticeable loss of transient speed. In other words, the HD 600 was easy to listen to but lacking in clarity and detail resolution—simply put, its presentation was “decaffeinated.” In this context, there was no way anyone would mistake these cans for a high-resolution device, let alone reach a sonic orgasm. Adding the microZOTL2.0 to the chain transformed the HD 600—almost as if it had received a shot of caffeine. The HD 600 sounded faster and much higher in resolution. For example, I was now able to clearly distinguish between different upsampling settings on the Eximus DP1 DAC.

Sonically, the best headphones in my collection are the Stax SR-X Mk2, which I use with the SRD7 Pro interface. These decades-old cans run circles around the HD 600. I keep them around for the same reason I hang on to my Quad 57 ESLs—a gorgeous midrange, absolutely to die for. Good electrostatic speaker designs seem destined to become classics for the simple reason that they leave little room for improvement. With the SRD7 connected to the microZOTL2.0’s speaker terminals, the Stax projected incredibly suave mids saturated with microdynamic subtlety. And there was nothing wrong with the treble range, which was reproduced with exceptional extension and air, and without any electronic artifacts. Together, these components forged a natural and synergetic partnership. 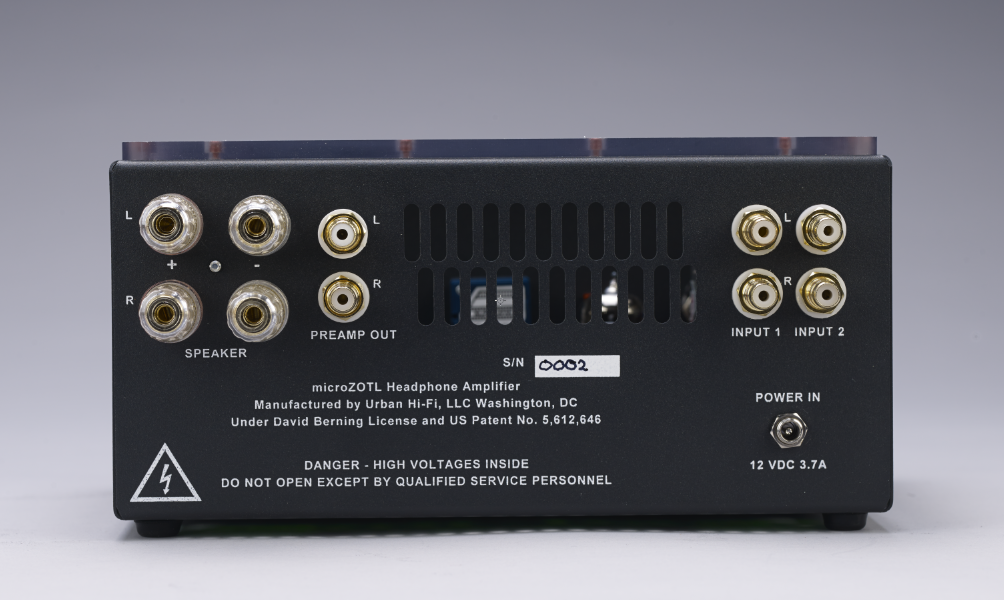 Most of you are probably familiar with Chesky’s binaural demo album titled Dr. Chesky’s Sensational, Fantastic, and Simply Amazing Binaural Sound Show. It contains a lot of good music as well as some neat test tracks. I agree with Chesky that binaural (aka dummy head) recording, far from being a gimmick, is an important technique for capturing the sensation of being there, in essence providing a live concert perspective. The right and left channel ID tracks have David Chesky initially standing some 30 feet from the mike in a reverberant cathedral acoustic. He talks as he walks closer and closer and ends up whispering in your ear. That’s a pretty impressive demo of the imaging capability of a good binaural recording. Getting a feel for the acoustic space of the recording was effortless with the microZOTL2.0 in the chain.

The microZOTL2.0 is one of the few headphone amplifiers that can truly deliver an emotionally charged listening experience. Since the microZOTL2.0 is sold direct to the public, without the usual dealer markup, it represents an uncommonly good deal. But it’s more than simply a question of money. Here, for the first time, via ZOTL technology, it is possible to experience the magic of a 6SN7 “power” tube. This may sound like a TV commercial, but the new and improved microZOTL outshines the original. That should not come as a surprise given the use of enhanced passive parts and better tubes. To my mind, the microZOTL2.0 is the pinnacle of desirability when it comes to headphone amplifiers.