San Diego retailer Alma Music & Audio, D’Agostino Master Audio Systems, and YG Acoustics teamed up in mid-November to demonstrate what can only be described as a mega-system. I attended the event as was treated to some of the best music playback I’ve heard.

Dan D’Agostino was on hand to showcase his latest creation, the Relentless monoblock power amplifier. This all-out assault on the state of the art in power-amplifier design can output 1500W into 8 ohms, doubling that power into 4 ohms. Significantly, the first 100W of that power is delivered in Class A. 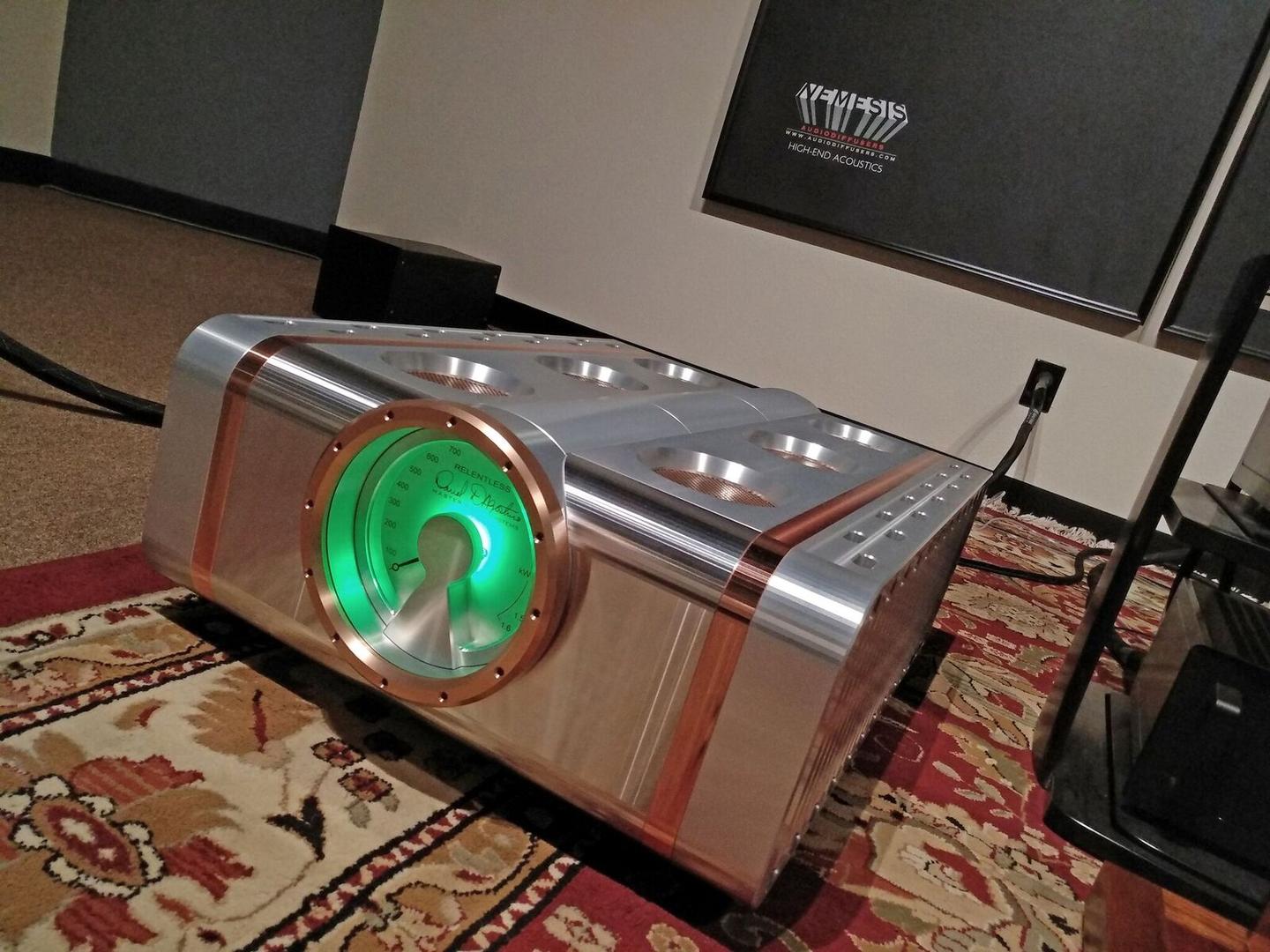 The Relentless drove YG Acoustics’ $265,900 flagship Sonja XV speaker system, which builds upon the successful Sonja 2.3 and consists of four towers (two per channel) weighing 463 pounds each. The XV turned out to be the perfect partner for the Relentless. Some of the “magical moments” I have experienced at audio shows or product release events—ones that transcend the usual electro-mechanical exercise—have been with YG speakers and D’Agostino electronics. Each XV has a total of ten drivers per channel, four of which are woofers along with three mid/woofers. All those large drivers help move enough air to produce sufficient bass output and extension in large spaces. Also, the Sonja XV was the first speaker in the Sonja series to include YG’s unique BilletDome tweeter, which combines a treated soft-dome membrane with a very strong, lightweight, acoustically transparent supporting “air frame” to create a new kind of tweeter that has the strength of a metal dome without the metallic “ringing” often associated with hard domes.

I should also note that the main listening space at Alma Music & Audio is a purpose-built room designed by Tomas Andugar of Nemesis Audiodifusores, a Brazilian company. The 30′ x 25′ room incorporates extensive acoustic treatments to address room-induced problems such as bass bloat, node cancellation, slap echo, etc. Andugar attacks these acoustical problems through a combination of resonance control, absorption, and diffusion, and does so in visually unobtrusive ways. There were quite a few large absorption panels, for example, with music-related photographs printed on their surfaces. Acoustically functional soffits and floor-to-ceiling corner panels all blended well into the look and ambiance of the room. (Alma also sells vinyl records, by the way, which helps bring in customers new to the high end, hence, the name, Alma Music & Audio.)

How did it all sound? In a word, marvelous. The first sonic characteristics to get my attention were the sheer massiveness and impact of the presentation. The vastness of the soundscape and the solidity and clarity of the individual images within that space were among the best I have experienced. It is more difficult to fill a large space with well-balanced music than it is a medium-sized one. At home, I listen to the medium-sized YG Sonja 2.2 speakers in a 12.5′ x 17′ room, sitting about 8′ away from each speaker. Compared to the roughly 15′ seating distance and a room with six times more volume at Alma, you can see how much more demanding of the amplifier and speaker Alma’s room is. This is where the power and finesse of the D’Agostino Relentless amp and the accuracy and power handling of YG Sonja XV come in. Together, they have to produce enough sound pressure at even amplitude across the full audio bandwidth to overcome the greater room volume and listening distances involved. The Relentless/XV combination not only excelled at meeting the basic large room amplitude/frequency demand—after all, some mediocre-sounding “muscle systems” can do this—but it did so with fantastic resolution of fine detail, timbral accuracy, and musical finesse without strain or listener fatigue. The result was a deeply rewarding listening experience. Music came alive in ways that were more reminiscent of live music than through almost all other large systems I have heard. Joni Mitchell’s “Circle Game” on the Travelogue version [Nonesuch] was just lovely—emotionally evocative, tonally convincing, dynamically alive. One of those “magical moments” again. 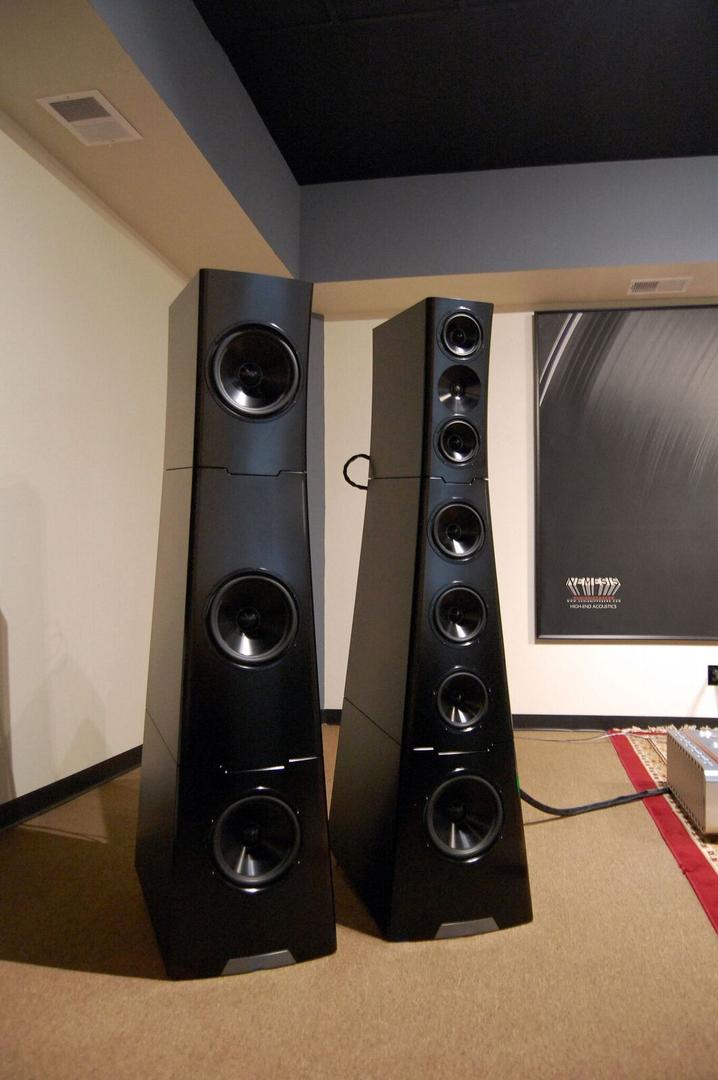 Another distinguishing strength was the system’s portrayal of depth, both of the sheer size of the front-to-back expanse but, more importantly, of the continuous layering and three dimensional fullness of individual images within the soundscape. Recorded music usually renders depth poorly—especially if it is reproduced through typical solid-state electronics. The D’Agostino/YG demo system had outstanding depth, even when the solid-state MBS Select DAC/preamp was functioning as the preamp. The entire soundstage and the images within it had convincing 3-D solidity and heft. Full orchestra was arrayed within the entire area behind the speakers, from wall-to-wall laterally, to the back wall, and to the top of the XVs. Within that zone, instruments and voices were allowed to breath into the rest of the room, projecting out into the listening area much like live music does.

The Relentless is not merely a more powerful Momentum 400 (D’Agostino’s former top model); it represents a major advancement in amplifier design. Dan D’Agostino explained nearly all high-powered amplifiers are bridged so that two complete amplifiers are employed to power each channel, with the speaker acting as the “bridge” between the two sections. The problem is that unless these amplifiers behave identically, and are fed identical (but opposite polarity) signals, the distortion isn’t completely canceled. D’Agostino addressed this problem by designing a super-precise input stage, and implemented with precise component matching, so that the two amplifier halves behave identically. The input stage is so well isolated from the rest of the amplifier that its performance isn’t affected by what the output stage is doing. The Relentless uses only a balanced XLR input connection to maximize its differential topology. Needless to say, the power supply is massive, accounting for much of the amplifier’s 570-pound helt.

Technology aside, the Relentless sounded remarkably transparent, continuous, grain-free, and dynamically unrestrained. To say the Relentless is a perfect melding of the respective virtues of tube and solid-state amplifiers in a large, heavy, polished metal sculpture does capture many of the accomplishments it represents, but that summation also limits its essence to comparisons of standard topologies. To me, the Relentless is more than that; it is a hallmark achievement in amplifier design whose sound transcends past solid-state and tube standouts. I have never heard a more musically expressive, powerful, grain-free, and transparent amplifier. The good folks at Alma Music & Audio did the Southern Califonia audiophile community a service by making the Relentless/Sonja XV combo available to those lucky enough to attend the demo event.