For such a big amplifier—and the Classic Stereo weighs in at 108 pounds—there isn’t much to it in the way of fancy doodads. Quite the contrary. A pair of XLR inputs on back, plus speaker connections. Push one green backlit button on the faceplate and you’re off and running. This is truly a plug ’n’ play amplifier. But my word, how it does play!

Dan D’Agostino’s latest creation is a throwback in looks (can you say industrial design?) but not in performance. No, it’s not as bruising as the famous Krell amplifiers of yore that D’Agostino used to build before he exited to start his new company. I have seen grown men’s knees turn to jelly as they whimper about their memories of a particular Krell amp they once owned. Those days are long over, particularly in an era when more than a few manufacturers are concerned with producing diminutive amps that fit into home décor rather than questing for the absolute.

To his credit, D’Agostino has ventured back to his origins. Go heavy or go home, so the weightlifters like to say. Mr. D. has done the former. The fully balanced Classic Stereo, which D’Agostino constructs at his factory in Arizona, has real cojones. It is a brawny and manly amplifier, one that D’Agostino is proud enough of to emboss his name on the faceplate. The amplifier is part of his new Master Power Series. 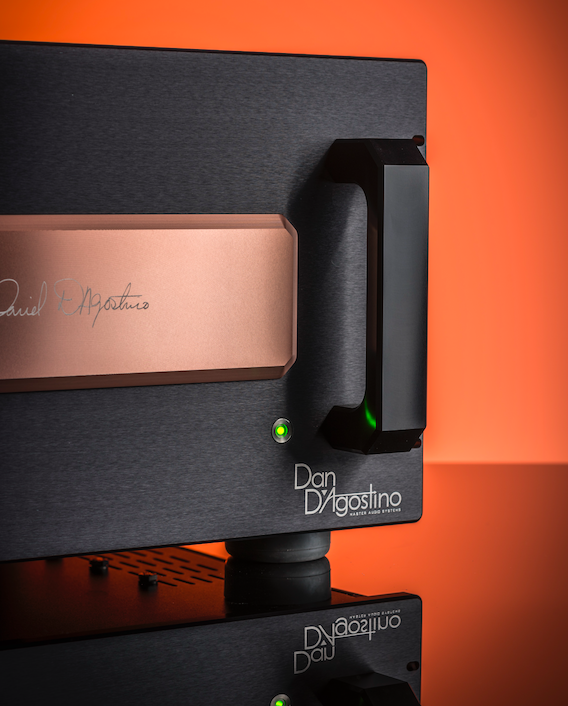 The Classic Stereo is, to use an old-fangled term, a gas to use. It had me pulling out the big stuff, whether orchestral or soul music, to remind myself of what the Wilson Audio XLF loudspeakers can deliver in the nether regions, especially when mated to an amplifier that delivers a hefty amount of current like the Classic Stereo. Power may corrupt, as they saying goes, but I didn’t hear much corruption here. What I heard was the abundant plusses that a powerful amplifier can offer—unflappability, smoothness, and dynamics. The days of abrasive solid-state, folks, are over.

And if you’re into power, check out the ratings on this amp. Naturally, it has a very high damping factor and, unlike some amplifiers that don’t double up power from 8 ohms to 4 ohms to 2 ohms, this one does. It goes from 300 watts to 600 watts to 1200 watts. Short of an Apogee Scintilla, I doubt there are many speakers extant that this amp can’t drive with aplomb.

As D’Agostino himself emphasizes, the aim of the Classic Stereo is to deliver a lot of performance for a reasonable (by, I hasten to add, high-end standards) price. This amplifier contains as many of the parts and as much of the sound of his top-drawer Momentum Series as possible. One area he hasn’t skimped on, for example, is build-quality. The amplifier features what is known as through-hole construction. This means that the leads on the capacitors, resistors and other parts extend through the circuit board rather than being surface-mounted—for better sound and reliability.

From the very first CD that I played—I ran the amp in balanced mode both directly from the dCS Vivaldi four-piece stack and from my Ypsilon PST-100 Mk II preamp—it was clear that this amplifier doesn’t waste time getting down to cases.

Take the CD This Time For Real [VizzTone], which features the southern soul singers Otis Clay and Billy Price. On track after track, I was both impressed (and seduced) by the command of the Classic Stereo. From bass to treble, it was as though the sonic tapestry were cut from a single cloth, partly because of the alacrity of the amplifier, partly because of its grip in the bass region. TAS Editor Robert Harley has written previously about the sensation of bass being a half-step behind the rest of the musical presentation. It creates a slightly vertiginous sensation, as though you want to physically push the music forward. There was none of that time lag here. On the Warner Classics reissue of the trumpeter Maurice André’s recordings, for instance, the precision of the bass accompaniment on Benedetto Marcello’s “Adagio” meant that there was no overhang—André’s trumpet simply soared over the bass line, which clearly demarcated the pulse of the music.

Worthy of note, too, was the verisimilitude with which the Classic Stereo conveyed the nuances of Clay’s and Price’s singing—crooning sighs, bellowing, and so on seemed to be palpably realistic. Much of this can be ascribed to the interstitial silence created by the amp’s ability to start and stop on time. What separates the pros from the amateurs in amplifiers, the men from the boys, is their sense of timing, regardless of musical genre. This is one area that D’Agostino has nailed.

Another thing that D’Agostino’s amp does very well indeed is to set up a cavernous soundstage. On the album Philadelphia Beat [Sunnyside Records], it presents the trio of Albert “Tootie” Heath on drums, Ethan Iverson on piano, and Ben Street on bass with a remarkable presence and sense of space. The tautness of Street’s bass is beautifully delineated, a real thud on the deepest notes, not to mention a warm, deep, and rich sound to the piano, particularly in the bass area, where it resounds thunderingly. This amp pushes a loudspeaker to move gobs of air. 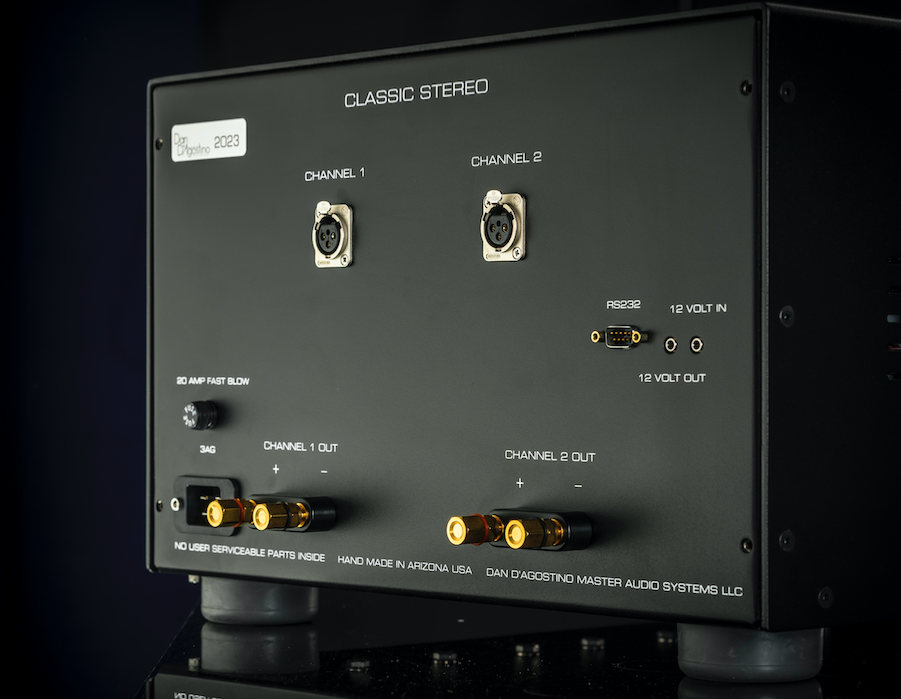 So much, in fact, that some listeners may initially be taken aback by how much energy the Classic Stereo delivers in the 60–200Hz region, where most of the sense of bass performance really resides. On Leonard Cohen’s Old Ideas [Sony], it offered the richest and gruffest rendition of his voice that I’ve ever heard. Some may find this a little over the top, but I think D’Agostino’s amp is fleshing out what’s already present in the recording without supplying much of an additive flavor. All of this is a way of saying that this isn’t a sterile and bleached-sounding amplifier. Rather, it lands on the warm and full side but without sacrificing detail or transparency. It’s not necessary to play it loud, for the Classic Stereo will reproduce fine detail at lower volumes, once again as a function of its power.

So what separates it from the truly megabuck amplifiers? It lacks the last degree of tactility, finesse, and depth that a more refined amplifier would convey. On a Harmonia Mundi recording of Bach’s violin concertos by the Freiburg Baroque Orchestra, the amp’s control was readily apparent but so was a slight glaze over the original instruments that the ensemble deploys for its performances. If this amp has a weak spot, it’s the treble where it can harden slightly on very complex and dynamic passages. Obviously, some compromises had to be made to get to this price point. I seriously doubt, however, that an amplifier built a decade ago for ten times the price would sound as good as D’Agostino’s Classic.

In that regard, perhaps the most striking aspect is how easily the Classic Stereo delivers the sense of an ensemble playing in unison. There is always what the U.S. Army likes to call unit cohesion when listening to the Classic Stereo. Put otherwise, there is no smearing, no bloat, or any of the other sonic nasties that can mar the suspension of disbelief that audiophiles crave when attempting to replicate live music; rather, the amplifier conveyed a lissome sense of ease and flow to the music. In sum, the Classic Stereo offers amazing imaging and clout. If you’re looking for an amp that can handle difficult loads with ease and provide excellent performance without costing you a packet, this is it.