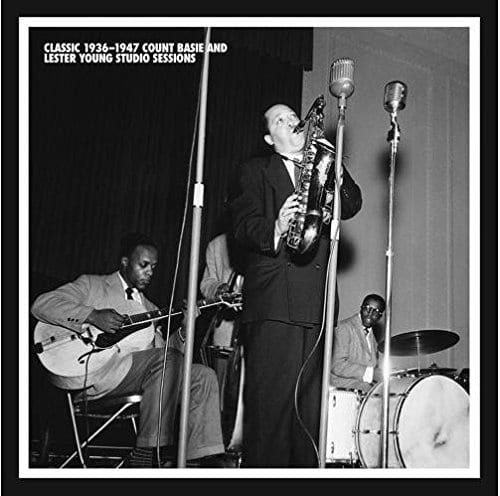 This collection has been heralded as “the mother of all Lester Young box sets” and lives up to that billing, gathering more of the essential recordings by this giant in one place than has ever been done before. Serious fans who have spent years tracking down this music may well feel jealous of anyone who can start here, with most of the fundamental pieces of a serious Lester Young collection in place. We will return to the question of what is and isn’t here below, but first, it can never be said too often that Young was among the greatest jazz musicians who ever lived. As a soloist, he is the single most important figure between Louis Armstrong and Charlie Parker, and many listeners would, if forced to choose, put him even above those two titans. Young’s 1930s recordings opened the door for all modern conceptions of jazz soloing, going far beyond the templates for improvised solos laid down by Armstrong and Coleman Hawkins.

Mosaic had various things to consider when preparing the set, starting with the fact that it released another Young/Basie collection in 2008, and collectors will not want to duplicate much of that. In fact, only one session is duplicated, the transcendent Smith/Jones date from 1936, and that because, incredibly, a few unissued alternate takes turned up, notably another version of “Lady Be Good,” with another 64-bar solo from Young. It is not as blindingly perfect as the solo we know, but it’s still wonderful to have. Basically the current set works around the Basie Columbia sides that were included in the earlier set and adds the Basie Deccas. To this are added almost all the important small-group sessions that Young participated in through 1947, including the monumental Kansas City Six date from 1938 and the merely epic 1944 and ’46 sessions by similarly named groups, the two wonderful trios that featured Nat Cole on piano, and everything Lester waxed for Keynote and Aladdin. There are also sessions led by Teddy Wilson, Benny Goodman, Sammy Price, and others, as well as one Basie quartet date that does not feature Young but that does richly deserve inclusion. The only major gaps not covered by the earlier box are Young’s Savoy recordings from 1944 and ’49 and his work backing Billie Holiday, which is easily found on collections that bear her name.

As always, Loren Schoenberg does a good job with the notes, especially when he focuses on things like the importance of the 1943 Keystone date that produced such masterpieces as “I Never Knew” and “Just You, Just Me,” and which had such an enormous influence on every postwar tenor stylist, from Dexter Gordon and Sonny Rollins to Stan Getz and Zoot Sims. The audio quality is up to Mosaic’s usual high standard, and the only real question for jazz fans will be how much of it they already have. Anyone who can question the music itself is simply not a jazz fan.