Masataka Tsuda, founder and chief designer of Silicon Arts Design and Concert Fidelity, is quietly gaining a reputation as an important voice in high-end audio. Born in 1959, in the midst of Japan’s post-war economic recovery, he acquired a unique perspective that spanned the transition from tube to solid-state electronics. At age 10 he built his first tube amplifier using scavenged parts. He relates that it was a six month adventure that included multiple circuit-breaker trips in his home. In the subsequent years he honed his solid- state electronics, formally launching his audio-industry career under the Concert Fidelity name at the 1986 Japan Audio Fair in Tokyo with a no-feedback, FET-based, high-gain, moving-coil phono preamp, the SPA-4A.

The CF-080 line preamp perfectly reflects his design philosophy and skill with both vacuum-tube and solid-state technologies. It is a mature design that has undergone several iterations. Enhancements from the previous version include state-of-the-art, power-supply DC-DC converters for critical input and volume-control stages, which are said to lower the overall noise floor. Super high-end “chip” resistors are now used in the input and volume-control stages, and the layout of the high-voltage power-supply circuit is also revised. Having lived with two of the previous versions, I can attest to the fact that the LSX2 is sonically Tsuda-san’s best effort to date, which is to say, a state-of-the-art contender.

First the basic facts. Functionality is rather limited. There are four single-ended (RCA) inputs, no tape loop, no balance control, and no phase-reversal switch In essence, a minimalist design that offers a single gain stage with selectable 6 and 12dB gain settings and an electronic volume control. A remote control is included, but source selection is manual in order to avoid relays and maintain a compact circuit topology. The input signal is routed through buffered high-performance analog switches and then though a dual-channel electronic volume control which uses proprietary digital circuitry and software, said to be the result of many years of in-house development effort. A pair of 12AU7 dual triodes are located on the back panel, mounted on a printed circuit board positioned just inside the chassis, thereby reducing analog signal-path length from input to output to an amazing four to five inches! No cathode followers are used—the dual-triode sections are cascode-connected, while maintaining wide bandwidth to 100kHz. The preamp tubes are readily accessible for tube-rolling purposes, and the end user is encouraged to experiment in this regard. Plate voltage for the output stage is supplied by a regulated power supply, using a full-wave rectifier tube and a choke coil (the 6CA4 can be swapped by the user). 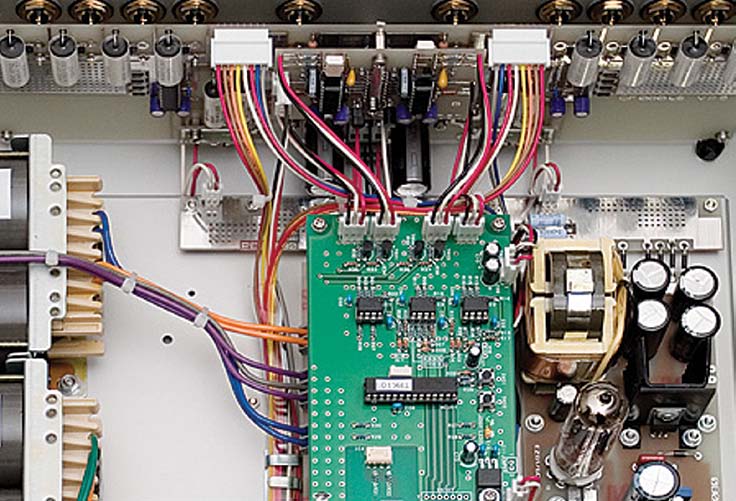 The circuitry plus layout technology in play here has been dubbed Direct Signal Path Technology or DSPT, and is inspired by Einstein’s dictum that things should be made as simple as possible, but not simpler. To quote Tsuda-san: “The space taken up by the amplifying circuit should be as small as possible, the circuit itself, as simple as possible. Current loops should be as small as possible, in other words, as similar as possible to those in coaxial cables. The construction of the active and passive parts making up the amplifying circuit should be as simple as possible, which is often found among military-spec parts. There is no way that an audio circuit or particular part can improve a signal in the course of amplifying that signal. The signal can only be degraded, and the less degradation, the better the circuit. There are circuits and parts that impart the minimum damage to audio signals, but even when such a part is discovered and a good sonic result produced, the next step should be figuring out how to eliminate that part. Eliminating it will, without fail, make the sound even better, closer to the proverbial ‘straight wire with gain.’ Using more such ‘good-sounding’ parts is a mistake all too commonly made by designers.” DSPT embodies simplicity as the surest approach to retrieving full musical expressiveness.

The first order of business was to select a 12AU7 vintage brand that best complemented my system and tonal balance preference. In an ideal world, a preamp tube would be seen and not heard. But in reality, and especially when dealing with a Class A, zero- feedback, single-gain-stage preamp, the intrinsic sonic character of the tube matters considerably. It has been my experience that the CF-080 is quite revealing of 12AU7 tube brands. My advice would be to stay away from new production types and stick with vintage U.S. or British brands. One clearly can’t go wrong with a Mullard Blackburn CV4003 with the box-shaped anodes, if in search of a slightly romantic hue. My top preference is the RCA 5814A, a 12AU7 variant, which combines a neutral balance with exceptional dynamics.

The music emerged from a totally black background. Even more remarkable was the fidelity with which the Concert Fidelity approached the organic textural liquidity and purity of the real thing. There was nothing artificial about its voicing of the musical tapestry. Think velvety and sensuous. Violin overtones and soprano upper registers shone with natural sheen. No electronic flavor, grain, or grunge to interfere with what was in the final analysis startling lucidity of expression.

To my mind, one of the Concert Fidelity’s “secrets” is tube rectification. The Audio Research SP-3a led the tube preamp renaissance in the 1970s with all solid-state rectification. Conrad- Johnson used tube rectification on some of its models in the 1980s and those were the preamps I gravitated toward then. My preference today is still for tube-rectified preamps. In hindsight, it’s clear to me that tube rectification accounts for a more relaxed and expansive presentation, and greater tonal realism; essentially it is responsible for a greater dose of tube magic. Some designers swear by fast-recovery low-noise diodes, but to my ears they don’t approach the sound quality of a tube-rectified power supply.

Transient finesse and low-level resolution were also first-class. Struck cymbals shimmered exquisitely, and in general, transient decay could be followed amazingly far into the noise floor of a recording. There are plenty of solid-state preamps that can match the CF-080 in resolution and transient speed, but with one vital difference—most of them lack emotional combustion, the ability to ignite the music’s emotional content. Without that spark, they end up sounding mechanical, almost robotic in nature. Breathing life into a recording is a Concert Fidelity specialty. Microdynamic nuances were fully fleshed out. Familiar vocals took on a new life, revealing layers of expressive shadings. The transition from soft to very loud was also quite convincing, rivaling that of the Pass Labs XP-30 in this regard. Large-ensemble music was reproduced with plenty of verve and kinetic energy. Bass lines were tightly defined—no complaints here—but did not come close to matching the XP-30’s gut-punching bass slam. But then few preamps feature the XP-30’s super-low output impedance and current-drive capability.

As configured with an RCA black-plate 5814A, the tonal balance was quite neutral. Sorry, this is not a euphonic-sounding preamp. The following descriptors definitely do not apply: slow and mellow, fat midrange, and overly liquid. In fact, the CF-080’s presentation was in the Goldilocks zone when it came to tonal colors. Colors were fully saturated, vibrant, and as realistic as I’ve experienced in my audio career. Some tube preamps brighten textures and appear to push instruments forward in the mix. The CF-080 did not adulterate a recording’s intrinsic intimacy. It simply got out of the way, allowing the music to ebb and flow with no coloration. Talk about a virtual disappearing act!

The soundstage was highly transparent with no veiling to speak of. The CF-080 could “part the skies” and shine a beacon of light onto the inner recesses of the soundstage. The spatial impression was expansive with exceptional depth and width perspectives. Image focus was palpable in the best tradition of tube amplification. Image outlines were spectacularly cohesive, meaning that they stayed focused over the entire dynamic spectrum from soft to loud.

There is no doubt in my mind that Masataka Tsuda’s designs push the state-of-the-art forward. His success lies in the potent combination of a minimalist, Zen-like design philosophy and perfectionist execution focused on parts-quality and circuit layout. The end result is a fantastic amalgam of textural purity, emotional expressiveness, and tonal color accuracy. Voltaire’s declaration that the best is the enemy of the good is very much apropos in this context. Once experienced, it is hard to return to and enjoy an ordinary preamp. Concert Fidelity will re-calibrate your sonic expectations. The CF-080LSX2 is now my go-to preamp, my reference, when it comes to tonal color accuracy. It is a full-fledged member of a world-class elite of cost-no- object designs. Powered by musical passion, it delivers the sonic goodies. Assuming that you can live with its limited flexibility, the Concert Fidelity will keep you smiling and engaged for a lifetime of musical enjoyment.