There was once a simpler time in the high end. Performance was in large part defined by component minimalism: an austere, stripped-down, hair-shirt aesthetic that shunned extraneous complications and pretty much shrugged off user convenience. The mantra was, above all, sonic purity. Tone controls, lighted displays, and remotes? Not a chance. But today’s high end is also married to the world of digital technology, computers, and communications. And that world has seen sweeping changes that have swept us along with them. Electronics are now expected to thread the needle between the analog and digital worlds. This has given rise to powerfully versatile components like the Classé CP-800 preamp/processor and its 200Wpc partner, the CA-D200 stereo amplifier.

If the CP-800 designation sounds a tiny bit familiar at this point, it should. Jacob Heilbrunn reviewed an earlier version of the CP-800 in Issue 230 a couple of years ago. Recently, however, some noteworthy upgrades suggested it was time for a return visit. Let’s review: The CP-800 is still Classé Audio’s top-tier analog preamplifier. It’s a highly configurable and handsome beast, outfitted with an onboard DAC and well appointed with a sophisticated kit of digital processing options. Its internals include fully balanced circuitry and completely isolated, symmetrical left and right channels. The stereo DACs are Wolfson 8741s, two per channel, in a dual-differential design. A phono mm/mc stage is also available as an option.

Visually, the familiar Classé profile has aged well since the Delta Series launched in 2004. Its wraparound aluminum front panel softens the often hard-edged cosmetics of most electronics brands. Its dominant feature is the LCD touchscreen display—now with a modern 16×9 aspect ratio. In fact, the touchscreen is responsible for so many functions that without it the CP-800 would be overrun with buttons and toggles. Fortunately, the screen is very legible, responsive to touch commands, and logically laid-out. There is a large, traditional volume-control knob to the right of the screen, along with a ¼” headphone jack and a USB input for portable devices.

Once I familiarized myself with the comprehensive and graphically rich instruction manual (all fifty-plus pages’ worth!), I found that the CP-800’s menu windows were easily navigable, with clear and intuitive icons. The hefty remote control has a full complement of functions. (See System Tech sidebar.) 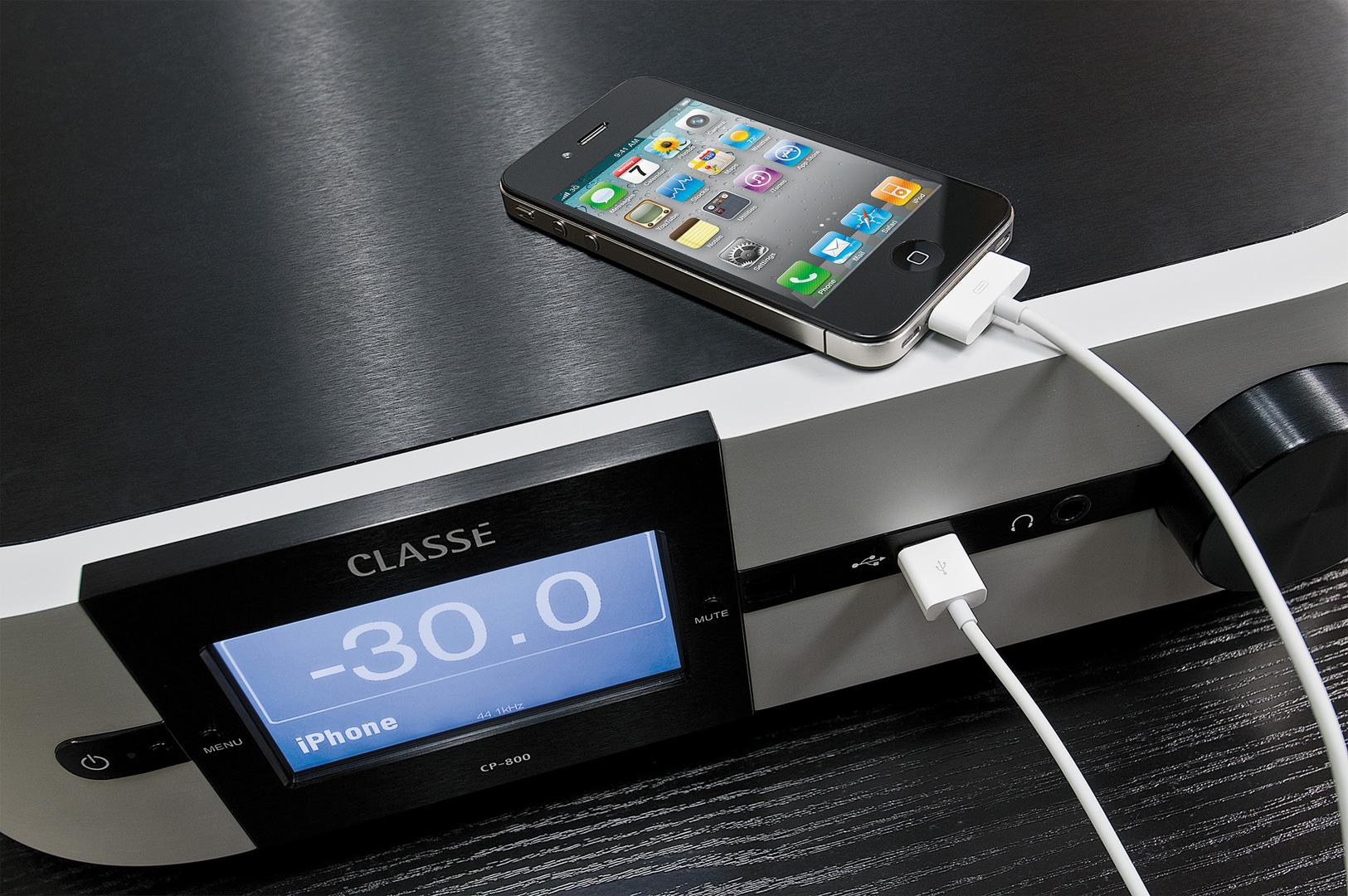 The big news and the primary reasons for revisiting the CP-800 are twofold: The asynchronous USB input, which is powered by its own galvanically isolated power supply, now supports full-bore 192kHz signals rather then the 96kHz of its predecessor. Even more welcome is the addition of network connectivity via Ethernet. Previously relegated to an inoperable back-panel input, this feature has been activated and offers streaming options including Apple AirPlay and DLNA. With the CP-800’s own oscillators controlling timing for D-to-A conversion, files up to 192kHz can be accommodated.

The CA-D200 stereo amplifier is the first Class D amp to carry the Classé name—an important development for a company long devoted to Class AB. The CA-D200 is rated at 200Wpc into 8 ohms (400Wpc into 4 ohms) and uses a proprietary-designed switch-mode power supply (SMPS) with power-factor correction (PFC) and switching amplifier stages. Classé says that DSP is used to “optimize the performance of the system, lowering the dead-band-time—the gap produced when the plus and minus halves of the switching amplifier’s output stage are both off, and considered the Achilles’ heel of earlier Class D designs—to a vanishingly low three nanoseconds or less.” Because of this reduction, distortion and noise have been markedly reduced in the bargain. It also enables the minimal use of overall negative feedback, another potential boon to performance.

Day-to-day living with the Classé was both a pleasure and a real eye-opener in the way it illustrated the ever-shifting nature of the high end. Whereas once upon a time my source components were limited to a turntable and a Dolby cassette deck, I took stock of all the sources driving the CP-800 during the time of period of my evaluation, and it was a like a population explosion. There was the ever-faithful turntable, CD transport over SPDIF, an HD-DVR, Blu-ray player, Lumin Music Player on the network with twin NAS drives, Apple TV, and a handful of USB thumbdrives. And they were all playing nicely, thanks to the CP-800’s copious input selection and switching flexibility.

For listening I mostly used the CP-800 as a renderer, augmented by routing my MacBook Pro into the CP-800’s back-panel USB input. Since I already have a Synology NAS on my wireless home network serving the Lumin A-1 Music Player, it was an easy task to connect another Ethernet cable from the router to the CP-800.

One of the first impressions I gleaned with the Classé separates was a tonal consistency across the spectrum that was neither significantly dark nor light, or if you prefer, neither yin nor yang. Top-end detail was uncluttered, and there was no hazy ceiling clouding the soundspace. These electronics were richly alive, viscerally musical, and dynamically charged. The combo most certainly did not follow the pattern of early Class D-driven systems that seemed to address only surface issues of music reproduction and tended to miss the finer points of low-level detail, ambience retrieval, and three-dimensionality. Classé may not have been first to the Class D party, but its arrival was worth the wait.

Sonically the CP-800/CA-D200 combo has a character that admirers of top-notch solid-state will immediately cozy up to: tight, crisp, tuneful bass response, a well-proportioned midrange, and a top end that seems to extend skyward. Perhaps its greatest strength is just how clean and fast and focused even the smallest musical transitions that it conveys are. The entrances and exits of individual notes emerge and recede into the recording venue’s inky black silences, pure and unfettered by noise or coloration. Whether it’s a churning beat from a high-hat or the distant slap-rattle of a tambourine, or the articulation of a lightning-fast series of notes coming off a concert grand, the Classé is as sure-footed and nimble as they come. The same traits apply to the low-level transparency of, say, the soft string arpeggios from a concert harp, or the steely peal of a percussionist’s triangle. These electronics allow me to peer ever-deeper into the SACD mixes of the Police’s “Murder by Numbers” and BS&T’s “And When I Die,” both tracks heavily accented by dense high- and low-level cues of polyrhythmic percussion and drumming—complex inner phrasing that can be easily smeared through inferior electronics.

Measured against a couple of benchmark competitors that I’ve spent many hours with, I felt the Classé duo could benefit from a little more Pass Labs-style bloom in the midbass and a greater sense of MBL warmth and elasticity in the top end. And compared with a fine tube preamp such as the Rogue RP5 (review forthcoming), I’d have to say that the CP-800 is a bit drier and cooler in personality overall. However, for sheer off-the-line speed, and its ability to convey venue dimensions or a studio recording’s reverberant decay, the Classé is pure, ah, class.

Inevitably I turn to vocals to define a component’s mid- and upper-middle range qualities. Listening to Jane Monheit’s cover of Joni Mitchell’s “A Case Of You” from Monheit’s Come Dream With Me release, I was quickly swept up in the rich, airy expressiveness of this intimate song about love and obsession. The Classé was discerning in the way it revealed low-level subtleties, from the fretless bass to the shimmering accents of the soft percussion arrangements. Further, opera singers and choruses presented wonderful instances of what the Classé was capable of doing with the unamplified human voice in large acoustic spaces. As I listened to “Ode To Joy” from Beethoven’s Ninth, I heard the bass/baritone’s voice fan out into the venue and gradually begin to decay. Similarly, the large chorale’s finer dynamic gradations seemed to expand and contract the venue’s boundaries like the pleated bellows of a giant accordion.

As long as I’ve been acquainted with the high end, simplicity has always been the watchword. Therefore, the traditional audiophile in me should hate all the perks and plusses that largely define the CP-800 and CA-D200. But that didn’t happen.

Actually something indescribably magical occurred every time I began listening through these electronics. Poof, they were gone. I flat-out forgot about them and simply settled back and enjoyed the musical moment.

So maybe I’ve inadvertently stumbled onto the point Classé Audio is making—that in spite of its deep well of high-tech features that both inform and coddle the user, the Classé electronics are really first and foremost about superbly refined music reproduction living in peaceful coexistence with the industry’s latest advancements. That’s a future we all can live with. Well played, Classé Audio; well played, indeed.

The Girl Singers That Time Forgot