What do we really want from our electronics, those (usually) necessary boxes between our audio sources and loudspeakers? Of course we need control—which source do we listen to, how loud, etc.—and we want these components to be easy to use and dependable. But, mostly, we want them to disappear. Unlike upgrading a phono cartridge, D-to-A converter, or speaker from which we expect more—more bass, more dynamic range, more dimensionality—with electronics, in the final analysis, we want less. It was with this undeniably difficult-to-define standard in mind that I got to know Classé Audio’s Delta Pre preamplifier/processor and Delta Stereo power amplifier.

The Montreal-based company introduced the third iteration of its Delta series components at High-End Munich in 2019. In addition to the two products considered here, a new single-channel amplifier, the Delta Mono ($10,999 each) also debuted. A five-channel power amp is coming next and there are plans, as well, for a surround processor and integrated stereo amplifier. This considered course of developing products and introducing them to the marketplace is expected from a company like Classé, well regarded by both recording professionals and discerning hobbyists. But, in fact, the brand has been on something of a roller coaster ride in recent years.

David Reich, an amplifier designer, and Mike Viglas, an audiophile who had the means to invest in the enterprise and who eventually became its sole owner, founded Classé Audio in 1980. (Viglas became wealthy as a hugely successful Ford heavy truck dealer. Dave Nauber, an audio industry lifer with Classé for 18 years and now the Brand Director, loves recycling an old joke when he tells the story of the company’s beginnings: “How do you make a small fortune in the audio business? Start with a big one.”) Nearing retirement age, Viglas instituted a distribution agreement with Bowers & Wilkins in 2001 and sold Classé to the venerable British speaker manufacturer in 2010. Then in 2016, rather unexpectedly, B&W was purchased by a Silicon Valley start-up, Eva Automation, which was looking for an established product in which to implement its cutting-edge wireless technology. “It’s arguable that, when they bought B&W, they didn’t even know they’d bought Classé,” recalled Nauber, sounding a little hurt. It was clear that Eva’s plans “had nothing to do with Classé” and operations in Montreal were shut down the following year.

Fortunately, salvation came in 2018 when Sound United acquired Classé, adding it to a roster of successful audio manufacturers that includes Denon, Marantz, Definitive Technology, Boston Acoustics, Polk, and HEOS. Nauber is in charge of the brand and the design team remains in Québec. The products are built at Sound United’s state-of-the-art Shirakawa Audio Works factory in northern Japan. 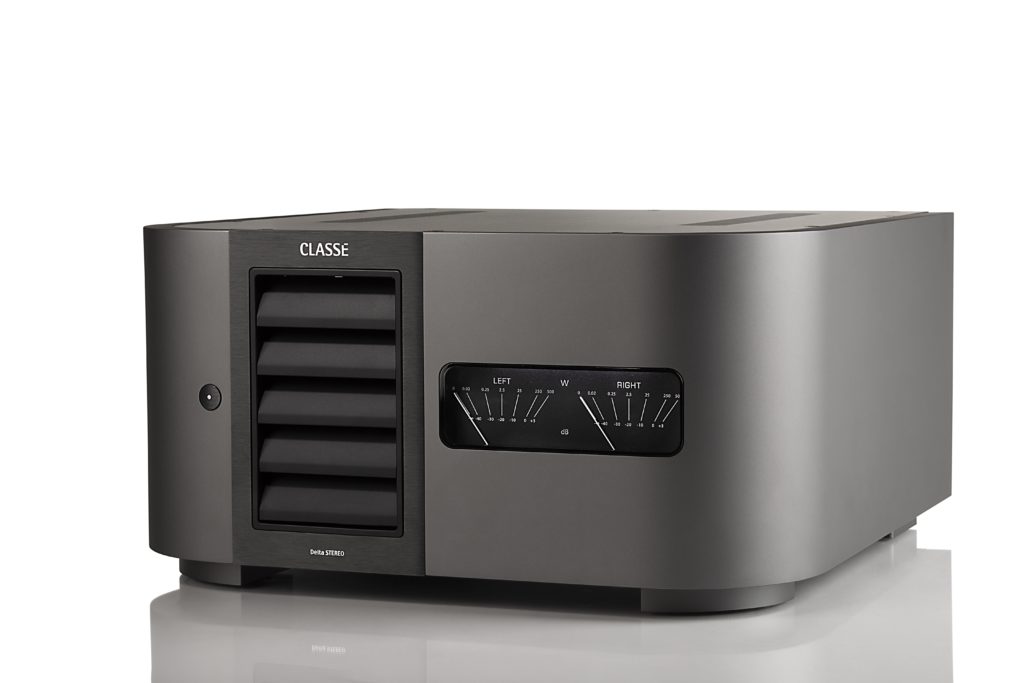 This history informs some of the design features of the latest Delta components, especially the amplifiers. Both the monoblock and the stereo models had to be unflinchingly powerful because they were developed with B&W loudspeakers in mind. “If you look at the impedance of a B&W 800 or 802,” Nauber told me, “you’ll see that between 70Hz and 1000Hz it’s below 4 ohms. That was one of the elements that figured into our design goals. We wanted an amplifier that could drive a lower impedance load and do so effortlessly yet still have enough power at 8 ohms. Essentially, whatever you connect to it, you’ve got plenty of power.” The Delta Stereo ($12,999) is a brute, weighing in at 102.3 pounds, though it registers as surprisingly compact on casual inspection; it’s just not as formidable-looking as your typical 250-watt (into 8 ohms) stereo power amplifier. The latest Delta components maintain the distinctive chassis “wrap” of earlier models—a single piece of 3.18mm-thick extruded aluminum begins at one back corner and sweeps around the front to the other back corner. The first 12.5 watts of those 250 are Class A, so there’s got to be some serious heat generated, right? Where are the massive heat sinks? How do these things breathe? The answer is that Classé amplifiers continue to employ an active cooling mechanism. There’s an utterly silent thermostatically-activated fan inside, with blades thicker than those in the previous Delta generation. It scoops more air in with each revolution and thus doesn’t need to go faster to dissipate more heat. Air from the environment enters the Delta Stereo through a louvered intake vent on the front panel and moves though the “Intelligent Cool Tunnel” to exit through the rear of the enclosure. Even with the amplifier on for several days and playing demanding material, the top of the chassis doesn’t get warm to the touch, though the rear exhaust port certainly does. The cooling system allows for Classé amplifiers to be stacked vertically, so long as there’s adequate ventilation behind them. It’s a reason why Classé amps have been popular with recording studios (London’s Abbey Road, for instance) and movie theaters, as well as with audiophiles who can confidently situate them in an equipment rack or cabinet without fear of overheating. The designers were keen to control internal temperatures for the usual reasons: The amps’ carefully chosen parts will perform as intended and last longer.