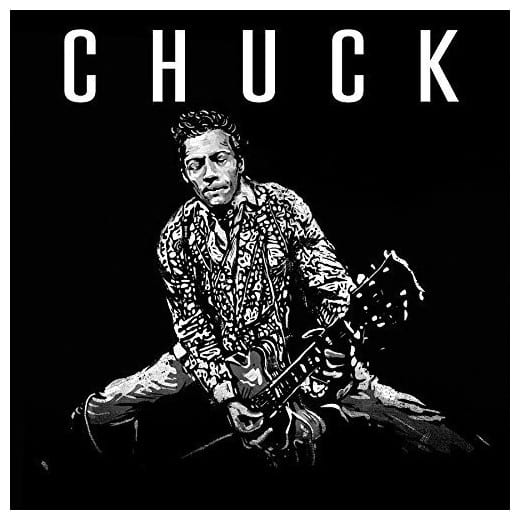 Late-career albums by rock ’n’ roll’s pioneers have been spotty at best—consider the embarrassments of Bo Diddley and Carl Perkins—but two of the orn’riest of the lot, Jerry Lee Lewis and now Chuck Berry, have revealed undiminished powers in their antiquity. In the latter’s case, Chuck (announced as his final album months before his death on March 18) is more than impressive—it offers genuinely stunning moments as Berry turns back the clock with impunity. Backed by his club trio The Blueberry Hill Band supplemented by his two guitarist sons and daughter Ingrid on harmonica and joining in vocally on a slow burning blues love tune, “Darlin’,” plus guest guitarists Tom Morello, Nathaniel Rateliff, and Gary Clark Jr. (he adding tasty, incisive soloing to the propulsive opener, “Wonderful Woman”), Berry supports his engaged, commanding vocals by cutting out on guitar as only Chuck Berry can. Items such as classically styled Berry rockers (“Big Boys,” “Lady B. Goode”), a grinding blues cover of the pop standard “You Go To My Head,” and a slinky, reggae-tinged “Jamaica Moon,” are potent exercises, bursting with life and enhanced, sometimes poignantly, by solid sonics. An unforgettable final testament.