When Chord Electronics released the first-generation Hugo headphone amp/DAC in 2014 it started a revolution in more ways than one. First, the Hugo proved that a headphone amp the size of a paperback novel could not only compete with but also potentially surpass the performance of full-size desktop or rack-mount components. Second, the Hugo introduced many audiophiles to a whole new way of thinking about DACs and the digital filters used in them—the Rob Watts way, as we’ll discuss in more depth in a moment (Watts’ digital audio design concepts had been used in earlier Chord products, but none with the sonic sophistication and widespread appeal of the Hugo). Even though the Hugo was relatively expensive it became a huge commercial success, largely because enthusiasts deemed it to offer good value for money in light of the extraordinary performance it offered. Now, Chord is back with a better and even more capable new Hugo2.

What’s different and better about the Hugo2 vis-à-vis the original Hugo? Just about everything.

Chord sought to give the Hugo2 more power, lower distortion, and reduced noise floor modulation as compared to the original Hugo. Accordingly, the Hugo2 puts out 1050mW at 8 ohms (up from 720mW at 8 ohms in the original Hugo), distortion rated at 0.0001% @ 1kHz/3V (down from 0.0005% in the Hugo), and a 126dB signal-to-noise ratio with “no measurable noise floor modulation” (an improvement on the 120dB dynamic range of the Hugo). Chord says the Hugo2 amplifier features a full Class A “discrete OP stage integrated into the DAC output amplifier and filter” that is “capable of 5V RMS and peak output currents of 0.5A”. The Hugo2 analogue amplifier section also features second order noise shapers said to “reduce distortion with load(s).” 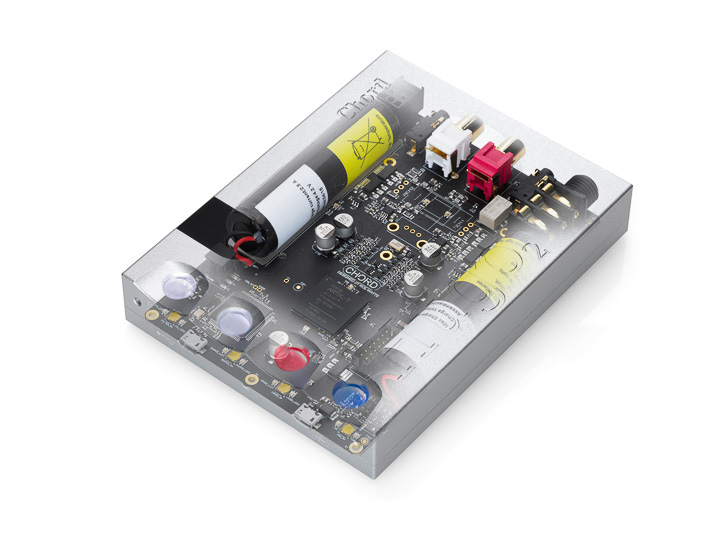 In turn, Chord has dramatically increased the capabilities and all around sophistication of the Hugo2 DAC section relative to the original Hugo. The first-gen Hugo’s DAC was a 4-element pulse array design with a digital filter offering about 26,000 filter taps; in comparison, the Hugo2 DAC is a 10-element pulse array design whose digital filter offers a stonking 49,152 filter taps (second only to Chord’s famous flagship DAVE DAC, whose filter offers a staggering 164,000 filter taps).

To appreciate Chord’s focus on digital filter design and on providing very large numbers of filter taps, it helps to read some of Chord Consulting Designer Rob Watts’ white papers on digital audio. Both the mathematics and the technical concepts behind Watts’ design philosophy become pretty dense and complex in a hurry so let me instead provide a scaled-back laymen’s interpretation for you. In a nutshell, Watts maintains that—for purposes of accurately reconstructing analogue audio waveforms from digital audio signals—he could get just as much resolution from CD-quality files as from ultra high-res files (albeit with a higher noise floor), provided he could use a digital filter with an infinite (or near infinite) number of filter taps. If you stop to think about it for a moment that is an astonishing assertion and one that potentially points the way forward for future high-performance DAC designs. Naturally, in the real world there is no such thing as a filter with an ‘infinite number’ of taps, but when you consider that most commercially available DACs use filters with taps numbering in the hundreds, the Hugo2’s filter system with 49,152 filter taps represent a huge step in the right direction. In particular, the Hugo2 does an exceptionally good job of accurately rendering transient and timing-related details in the music, including cues that contribute to the perceived three-dimensionality of sounds.

The Hugo2 DAC section uses “pulse array DAC’s (that) have innately very low levels of noise floor modulation.” Jitter, which can also be a source of noise floor modulation, is held to a minimum via a digital phase lock loop. Further, the DAC provides extensive RF filtering to help eliminate noise. Apart from eliminating noise wherever possible, the real secret to the Hugo2’s sound lies in its very sophisticated, WTA (Watts Transient Alignment) filter system. In the Hugo2, the filter system is implemented via a powerful, custom-coded Xilinx Artix 7 FPGA (field programmable gate array) device, which uses, Watts explains, the equivalent of “45x 208Mhz DSP cores in parallel to create the WTA filters” (there is a 16FS WTA filter followed by a second 16FS-to-256FS WTA filter said to “further improve timing reconstruction accuracy…”).

The Hugo2 offers four user selectable, colour-coded filter options: an Incisive neutral “ultimate reference” filter (white), an Incisive neutral filter with HF roll-off (green), a warm filter (orange), and a warm filter with HF roll-off (red). Thus, users can fine-tune filter settings on the fly to obtain to the best sound quality possible with the recordings that are at hand. Finally, the Hugo2 provides a Crossfeed control with settings for Off, Level 1 (Light), Level 2 (Medium), or Level 3 (Heavy) effects. The purpose of the Crossfeed circuit is to make headphone/earphone soundstaging sound more like the presentation heard from high-quality speaker-based systems.

The ergonomics of the Hugo2 also improve on those of the original Hugo. The Hugo2 provides four dome-shaped and self-illuminated control switches (much like the ones found on Chord’s Mojo amp/DAC) to provide On/Off, Crossfeed, Input, and Filter selections. Then, in keeping with long-standing Chord design tradition, there is an upward facing ‘porthole’ through which internal circuitry is visible and which provides colour-coded illumination to indicate the type and resolution levels of the files being played. Finally, there is a recessed and also dome-shaped self-illuminated, touch-sensitive volume control that, like Aladdin’s lamp, responds to being rubbed. Swiping a fingertip across the control in an upward direction increases the volume and vice versa, while the background colour of the volume control indicates the volume levels chosen. The left hand side of the Hugo2 provides two USB inputs (one for digital audio signals and the other for battery charging), while the right hand end provides 6.35mm and 3.5mm single-ended headphone outputs, a stereo pair of RCA-type analogue output jacks, a combination 3.5mm coaxial/optical digital input, and TOSlink optical input.

Two rechargeable custom Enix Energies 3.7V/9.6Wh (2600mAh) batteries provide power for the Hugo2, with play time specified as being “in excess of seven (7) hours.” Recharging can take anywhere from four hours via a 1.8 amp fast charger on up to eight hours via a one-amp slow charger. The unit can be charged and then played using battery power alone, or an alternate mode allows the Hugo2 to remain connected to its charger while it is being played. 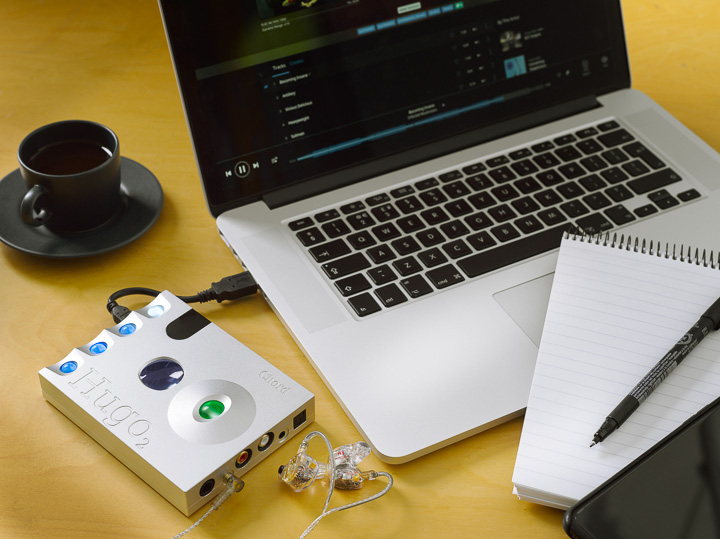 During my tests I ran the Hugo2 both as a standalone DAC in my reference speaker-based hi-fi system and as a headphone amp/DAC used with a broad set of test headphones and earphones. DACs on hand for comparison included the Exogal Comet, the AURALiC VEGA Digital Audio Processor, and the PS Audio DirectStream DAC (updated with PS Audio’s latest Huron OS software). Headphone amplifiers on hand for comparison included the AURALiC TAURUS and (briefly) the HiFIMAN EF1000. Test earphones and headphones included the Noble Audio Kaiser Encore, Audeze iSINE20, MrSpeakers ETHER Flow, Abyss AB-1266 Phi edition, and HiFiMAN Susvara. Throughout my tests the Hugo2 managed to impress me favourably at every turn.

When I used the Hugo2 in my speaker-centric hi-fi system, I found its sound different to but also very much competitive with that of my PS Audio DirectStream DAC, which is saying a mouthful (the $6000 DirectStream DAC itself enjoys a reputation for terrific performance for the money). The DirectStream DAC enjoyed an edge in terms of definition, focus, and a quality that for want of a better term I will call ‘incisiveness’. In contrast, though, the Hugo2 offered a more holistic and organic-sounding presentation, equal if not slightly superior amounts of low-level detail, and a noticeable edge in terms of overall three-dimensionality. I could see listeners preferring one DAC versus the other for perfectly valid musical reasons, but the fact that the Hugo2 can compete effectively on a level footing with the more expensive DirectStream DAC is itself a remarkable achievement. 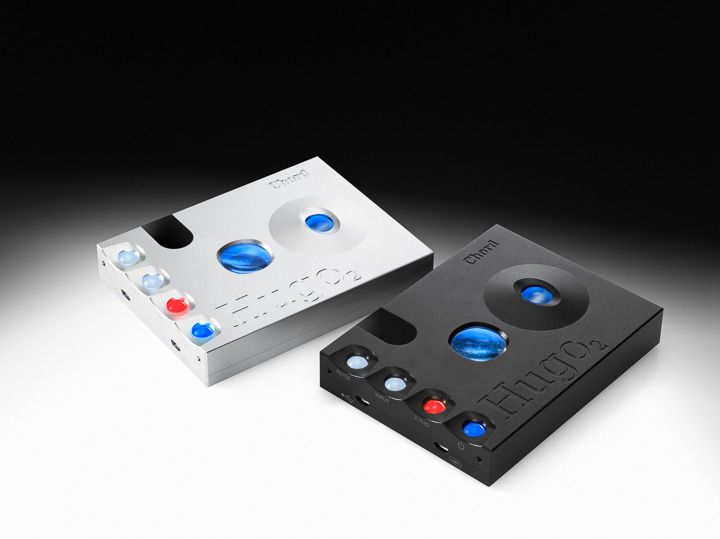 A track that neatly revealed many of the Hugo2’s strengths was ‘Country Roads’ from Gary Burton, Chick Corea, Pat Metheny, Roy Haynes, and Dave Holland’s Like Minds [Concord, 24/96]. Here, strong individual jazz artists bend their efforts toward a true musical conversation that is initiated by vibraphonist Gary Burton, but in which each artist responds to the other and is able to have his say. The Chord did a phenomenal job of capturing the full, rich, tubular tonality of the vibraphone lofting its sound across the stage as the other performers provided perfect support. But as each player takes his turn to solo, the Hugo2 tracks right along, shifting its centre of attention to focus clearly on each instrument in turn. Thus, the Hugo2 caught the liquid and honey-like tone of Metheny’s guitar; the deep, earthy, and articulate growl of Holland’s bass; the laser-focused clarity and purity of Corea’s piano lines; and the supreme delicacy and restraint of Haynes’ percussion work. More to the point, the Hugo2 conveyed the sense of occasion and of conversation—a true musical meeting of minds among old friends who know each other’s playing well. The Hugo2 turns in a performance that would be worthy of a DAC carrying a mid-to-high four-figure price tag,

The performance of the DAC in a conventional two-channel system is exceptionally impressive, but only half the story, because the Hugo2 is a ‘transportable’ headphone amp/DAC. The Hugo2’s sonic character in this context is much the same as when it is used as a standalone DAC, but with the added benefit that top shelf headphones make the Chord’s low-level details and three-dimensionality even more apparent than most loudspeakers do.

I found the Hugo2 more than quiet enough to use with high sensitivity earphones (e.g., the Noble Kaiser Encores or Audeze iSINE20’s), yet powerful enough to drive all but the most demanding full-size headphones (e.g., the MrSpeakers Ether Flow and the Abyss AB-1266 Phi edition). The Hugo2 even drove the very low sensitivity HiFiMAN Susvara well up to a point, though my sense was that the Susvara probably needed more power than the Hugo2 (or most other headphone amps) could provide.

The Hugo2’s quiet and natural-sounding presentation complements most types of music beautifully, but its terrific low-level detail and inherent three-dimensionality really come alive on tracks such as Ron Miles and Bill Frisell’s ‘Darken My Door’ from Miles’ Heaven [Sterling Circle Records, DSD64]. On this track, Miles’ cornet simply sounds real, so that listeners can hear even the smallest details that define the horn’s timbre, so that its attack, sustain, dynamics, and decay characteristics are made vividly clear. Moreover, the Hugo2 places the horn with pinpoint precision within a broad expansive soundstage. Frisell’s supporting guitar is captured in a slightly more diffuse way, as if its amplifier had been placed onstage and then fairly closely mic’d. The result is a wonderfully up-close-and-personal rendition of the recording event itself, as if one’s headphones (or earphones) provide—thanks to the Hugo2—a remarkable producer’s eye view of the studio proceedings as they unfold.

If I sound deeply impressed by the Chord Hugo2, that’s because I am. At this moment in time I really can’t think of any other transportable headphone amp/DAC that can directly compete with Hugo2, or that even comes close. Granted, the Hugo2 is not an inexpensive product, but it performs at such a high level as a headphone amplifier and especially as a DAC that it deserves your careful consideration and our strongest possible recommendation. 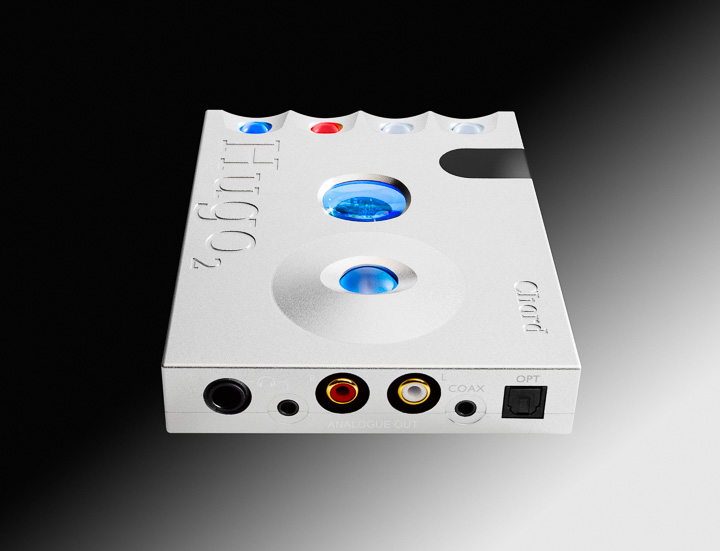