As many music lovers know, the legend of Chord Electronics’ Hugo family of products started several years back with the first-generation Hugo, a wildly overachieving portable headphone amp/DAC that took the marketplace by storm. Though that first Hugo was ostensibly a personal audio product, it didn’t take audiophiles long to discover that it could handily compete with (or in many cases surpass) the performance of like-priced standalone DACs for use in full-size audio systems. Granted, it did make for a strange sight, as the system would be comprised of racks full of big, full-width components plus the compact little paperback-book-sized Hugo, which at least sounded big.

Audio history took its course, so that the first-generation Hugo begat the critically acclaimed first-generation desktop-sized Hugo TT (“TT” stands for table-top), which was essentially the DAC section of the Hugo bolted on to an even more capable and powerful Chord headphone amplifier/preamp. As time moved on, those first-generation Hugo models gave rise to what was and is one of Chord Electronics’ greatest achievements: namely, the cost-no-object DAVE (Digital Audio Veritas in Extremis) preamp/headphone amp/DAC. 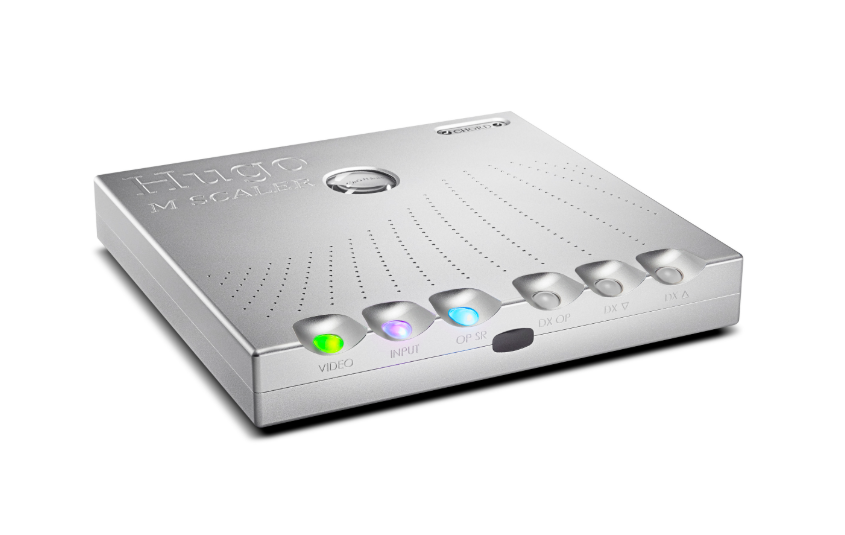 What’s the significance of the ultra-long tap-length digital filter and of the WTA algorithms? In seminars given around the world, Watts has suggested that few designers recognize the full implications of digital audio sampling theory, which according to Watts points to an astonishing conclusion. Specifically, Watts contends that garden-variety 44.1kHz digital audio files could, if processed through a digital filter of near infinite tap length, yield analog waveforms every bit as accurate and complete as those produced from higher-res audio files, albeit with slightly higher noise floors. Stop a moment and let that claim sink in. Watts is saying, in essence, that a DAC with a properly designed filter system can deliver ultra-high-res sonic results from conventional CD-quality files.

To give some perspective, most normal DACs use filters offering a couple of hundred taps, whereas Chord’s DAC filters offer tens of thousands of taps, or more (the DAVE, for example, offers a filter with ~164,000 taps). Each time new Chord Electronics products up the number of available filter taps, says Watts, the WTA algorithm has had to be revised to take advantage of the additional processing power, while sound quality has audibly improved. This “more filter taps = superior sound” philosophy forms the underpinnings of the DAC designs found in the Hugo, Hugo TT, DAVE, Hugo 2, and now the new Hugo TT 2, which offers 98,304 filter taps (second only to the DAVE DAC within the Chord Electronics range). The Hugo TT 2 is one of our two review subjects here, the other being the Hugo M Scaler, which we will get to in a moment.

To state things simply, the Hugo TT 2 is different from and better than the original Hugo TT in every way. It is quieter, yields unmeasurable levels of noise, offers greater dynamic range, provides a different and better power supply, produces much more output power, and incorporates a markedly improved DAC section. In short, everything the Hugo TT could do, the Hugo TT 2 can do better.

The amplifier section of Hugo TT 2 is very powerful, delivering up to 7.3W at 8 ohms in single-ended mode or a stonking 18W at 8 ohms in balanced mode. For this reason, and with headphone/hearing protection in mind, Chord Electronics advises owners to start out with extremely low volume level settings and to proceed with appropriate caution.

The DAC section of Hugo TT 2 is as flexible as the amplifier section is powerful, offering support for PCM digital audio files ranging from 44.1kHz up to 768kHz with DSD support via DoP (DSD over PCM) for DSD 64 through DSD512. As mentioned above, Hugo TT 2 uses a 10-element digital filter that provides 98,304 taps and that runs a 16FS WTA 1 filter algorithm. Moreover, the DAC section provides four user-selectable sub-filter settings: Filter 1 “Incisive Neutral” (the recommended reference setting), Filter 2 “Incisive Neutral with HF roll-off,” Filter 3 “Warm,” and Filter 4 “Warm with HF roll-off.” An IR remote control is included.

Now we come to the Hugo M Scaler, which in many ways is a ground-breaking product. Basically, the M Scaler is a very powerful digital upscaling device equipped with a >1M-tap digital audio filter—claimed by Chord Electronics to be “the most advanced in the world.” The M Scaler can accept virtually any digital audio file input regardless of resolution or sampling rate and will upscale the input data to either 705.6kHz or 768kHz levels (depending on whether the data was based on a multiple of 44.1kHz or 48kHz). But upscaling per se is only part of the story; the other part is an FPGA-based digital filter that offers a staggering 1,015,808 taps and that runs under a specialized version of the WTA algorithm—one adapted to take advantage of the enormous processing power. In the end, the M Scaler can send upscaled and pre-filtered audio data to any of the Chord Electronics DACs that support 705.6kHz and 768kHz inputs, including the Qutest, Hugo TT 2, and DAVE.

Much of the technology of the M Scaler is drawn from Chord Electronics’ previously released Blu II upscaling CD transport, with the primary difference being that the M Scaler features digital inputs only (no CD transport) and is sized and styled to conform to the Hugo TT-family design idiom. From a sonic perspective, though, the real significance of the M Scaler is that it can take garden-variety CD-quality material and upscale it to the highest practical sampling rates possible, while applying a digital filter so powerful that, says Watts, the result is sound quality equal to or better than that of ultra-high-resolution digital files. But here’s another point to ponder: The M Scaler lets its owners access the most sophisticated digital filter Chord Electronics presently knows how to make—a filter better than the ones used either in the Hugo TT 2 or in the DAVE.

The M Scaler provides two BNC digital inputs, two optical digital inputs, and one galvanically isolated USB Type-B input. Digital outputs include one optical output, one coaxial SPDIF via a single BNC connector, and one dual BNC, which is the output of choice for best performance. While the Hugo M Scaler can conceivably be used with any DAC, the manufacturer makes it clear it is really optimized for use with Chord Electronics DACs that provide high-bandwidth dual-BNC inputs able to take full advantage of the Scaler’s capabilities. Once I heard the M Scaler in action I thought that its sonic benefits were both transformative and profound.

Using a group of very high-performance reference headphones from Final, HiFiMan, Meze, and MrSpeakers, I listened to the Hugo TT 2 both with and without the M Scaler and here is what I learned. Heard in isolation, the Hugo TT 2 sounds exactly like what it is: one of the finest headphone amp/DACs available today. While it is not quite on a par with the more than twice as expensive DAVE, the Hugo TT 2 takes worthwhile steps forward relative to its predecessor in resolution, clarity, focus, and coherency, while also offering quieter backgrounds and more dynamic muscle. In short, the Hugo TT 2 can more than hold its own in comparison to like-priced competition. However, fold the M Scaler into the equation, and the picture changes dramatically for the better.

Quite candidly, the M Scaler makes substantial, across-the-board improvements to almost every qualitative aspect of the sound—so much so that you might feel like you are either listening through an altogether different and better headphone amp/DAC, or listening to delightfully re-mastered and/or much higher-resolution versions of your favorite recordings. Once you hear the M Scaler in action, there’s no going back.

I played a Virgil Fox pipe organ performance of Bach’s Prelude and Fugue in D Minor from the Reference Recording 30th Anniversary Sampler [Reference Recordings, HDCD] through the Hugo TT 2 and, as expected, it sounded superb. But, with the M Scaler in play, the unexpected sonic improvements I heard left me slack-jawed with astonishment. First, the pipe organ’s low-frequency pedal notes sounded more deeply extended (right down to the very low-frequency shudder of air columns in the large pipes), much more tightly focused, and possessed of considerably more textural nuance. Second, the pipe organ’s middle register sounded rounder, more expressive, and more full-throated, with a more spacious and three-dimensional presentation overall. Third, the organ’s upper-register passages, which had sounded just a bit congested when played through the Hugo TT 2 alone, suddenly sounded clearer, more delicate, and far more articulate, with virtually no congestion at all. Finally, the acoustic interaction between the pipe organ and the recording space was rendered more vividly and naturally, while apparent soundstage size increased. Impressively, these improvements were wrought upon a recording widely acknowledged to be a superb one to begin with.

I enjoyed similar benefits when I played the “Triptych (Excerpt)” from A Company of Voices—Conspirare in Concert [Harmonia Mundi, 16/44.1]. This exuberant and syncopated piece for percussion ensemble and concert choir is not one that is easy for most DACs to handle, in part because of the large-scale dynamic swings involved and the perhaps slightly over-modulated choral swells that at times threaten to become ragged and strained. However, with the M Scaler assisting the Hugo TT 2, several beneficial things happened at once. First, the timing and timbres of the percussion instruments improved dramatically, with more incisive transient sounds, rounder tonalities all around, and the all-important qualities of “swing” and dynamic “jump” in evidence. Next, individual choral lines became clearer and more intelligible, while the potentially problematic vocal swells sounded better controlled and more expressive, with elements of congestion mostly (though not entirely) cleared up. Last but not least, the sounds of the concert venue were captured much more realistically (I know this because I was present in the hall on one of the evenings when the recording was made) with appropriate stage width and depth. Once again, the M Scaler/Hugo TT 2 pair made an already good recording sound not just a little but a whole lot better.

My point is the Hugo TT 2 and Hugo M Scaler fit together like a sonic hand in a glove; once you hear them together, you won’t ever want them to be apart. While the Hugo M Scaler costs nearly as much as the Hugo TT 2, it ushers in so many of the sonic extras that truly bring music to life that in my judgment it is well worth its asking price. And consider this: While Chord Electronics’ DAVE may be in a class of its own as a standalone headphone amp/DAC, the combination of the Hugo TT 2 and the Hugo M Scaler costs less than the DAVE and may actually offer better all-around performance, which is saying a mouthful.