Nobody does neutrality like the Swiss, who haven’t been involved in an international conflict since 1815. They sat out World War I and World War II, didn’t join the United Nations until 2002, and so far have refused to join the European Union. This policy of neutrality appears to have had a profound effect not only on Swiss foreign policy, but also on the country’s high-end electronic equipment.

Enter CH Precision. Several years ago, I reviewed the company’s P1 dual-monaural phonostage, which relies on current amplification rather than the more traditional voltage amplification to boost the signal from a cartridge. I was riveted not only by the dynamic wallop of the CH phonostage, but also by the sublimely black backgrounds that it produced. The sheer scale and depth of the soundstage surpassed any other phonostage that I had hitherto experienced. It was as plain as day that many of these attributes derived from the CH’s exceptional neutrality and its very low noise floor.

So when Raphael Pasche, an electronics designer at CH, inquired whether I might be interested in reviewing his new A1.5 two-channel amplifier, I was more than game. CH had its American brand ambassador Ralph Sorrentino send along the amp as well as its L1 preamplifier so I could run the A1.5 in balanced configuration. The A1.5 is an improved edition of the company’s original A1 amplifier, which can be upgraded to the current version. The main alteration seems to have been the introduction of flaming crimson-colored electrolytic capacitors in the power supply. It also contains a new 1700VA toroidal transformer. The A1.5 outputs 150 watts in contrast to the more demure 100W produced by the A1. 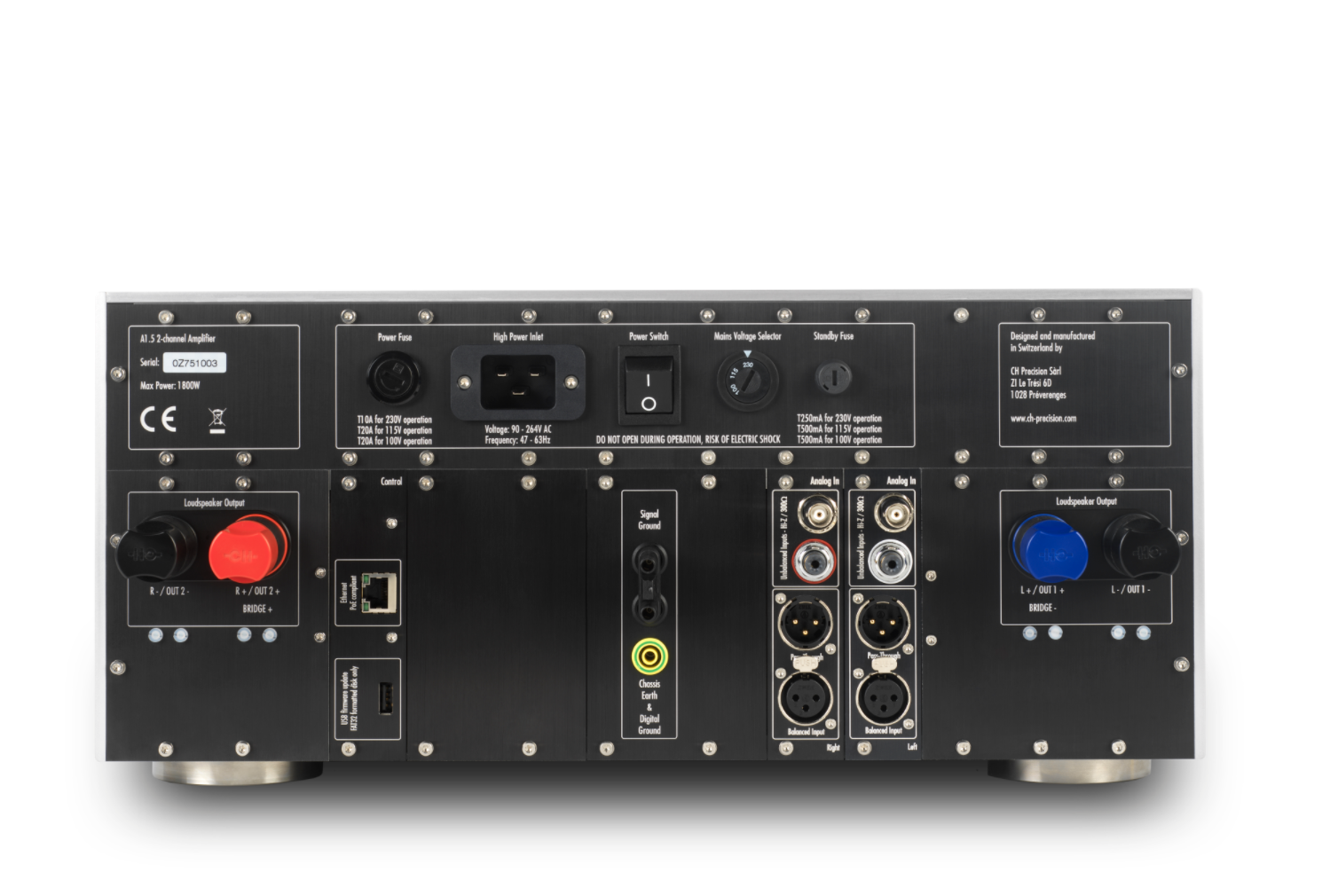 The really ingenious thing about the amp, however, is its flexibility. Call it a unique Swiss mix of technology and sonic virtues. Pasche, who visited me to install the units, explained their multifarious software-controlled features, which can be accessed via buttons on the front panel. In stereo mode, the A1.5 outputs 150Wpc into 8 ohms, and 275Wpc into 4. When configured as a monoblock, the output power increases to 550W. In another configuration, a single input can drive both channels, a useful feature when bi-amping. I used two A1.5’s, each in stereo mode. Why run two A1.5’s as four distinct amplifiers? The Wilson WAMM Master Chronosonic loudspeaker also can be run with separate subwoofer towers. Pasche’s face lit up with pleasure as he reminded me that using all four CH Precision amplification modules means that I would be able to match all the loudspeakers and subwoofers seamlessly.

The upsides of the CH amps don’t end there. They allow you to adjust the gain of the amplifier in 0.5dB steps up to 24dB, as well as the ratio of global-to-local feedback in six steps from 0, 10, 20, 40, 70, to 100 percent. The more feedback you use, the better bass control tends to become, but the price is usually a murkier overall sound. I almost forgot to mention a guilty pleasure: The front panel features a meter that allows you to follow how many watts the A1.5 is outputting. I confess that I succumbed to temptation and pushed up the volume level just to see how far I could push the meters on a couple dynamic tracks.

With its healthy output, I never had any worries about stressing the drivers. Instead, KC and the Sunshine Band on my recent Mobile Fidelity LP release came pouring—dare I say blaring?—out of the loudspeakers on the song “Get Down Tonight,” as the bass thumped satisfyingly. I was tempted to do a little dance, as it were. I also pushed the amplifiers on the Analog Productions 45rpm release of Soular Energy, which was originally issued on the Concord label in 1985 and features some of the best bass playing (from Ray Brown) this side of paradise. With the A1.5 amps in the system, the bass notes were taut and lithe. Perhaps the number one thing I look for in that region is pitch definition because it is, more often than not, difficult to attain. It’s not that there isn’t a lot of bass with a variety of speakers but that it tends to become monotonic. I never had that sense with the A1.5. Instead, it hung onto the notes with enviable tenacity.

I had a similar experience listening to brass ensembles. When I had the CH P1 phonostage in situ, I vividly recall how the tuba sounded like a foghorn emerging from the mists on a Philip Jones brass ensemble album. The great recording of Gabrieli antiphonal works on the Columbia label called The Glorious Sound of Brass, rereleased as an SACD by Sony, had a similar effect on me. This album, which was recorded in 1966, features the brass sections of the Philadelphia, Cleveland, and Chicago orchestras. I defy you to listen to the sonorous playing of Chicago’s legendary Arnold Jacobs on tuba through the A1.5 and not emerge shaken and stirred.

Another excursion into the world of brass that I seem to make regularly comes by way of the Hungarian trumpeter Gabor Boldoczki’s CD Gloria with the organist Hedwig Bilgram, who often accompanied the French trumpet virtuoso Maurice André on Erato recordings. A good stereo system will emphasize the difference in sound produced by such top-flight performers. The sound of a trumpet is always going to be the unique expression of the performer, his or her physique, embouchure, and sheer lung power. André liked to claim that he had the ability to blow up a tire and apparently advised his students to put a piece of paper on the wall and blow forcefully enough to keep it pinned there while slowly walking backwards. Try it. It isn’t easy. Boldoczki possesses ample lung power to judge by his fortissimo passages on his renditions of Giulio Caccini’s and Charles Gounod’s respective versions of “Ave Maria,” but he possesses a more feathery and sinuous sound than André, almost as though the notes were molting at times. The A1.5 clearly delineates these kinds of distinctions, rendering fine detail and tonal colors with great fidelity.

On the soundtrack to the biopic Bolden, a tribute to the New Orleans cornetist Buddy Bolden, which is composed and played by Wynton Marsalis, the venerable ballad “Stardust” features some fancy trumpet footwork and genial singing. But overall the recording, it must be confessed, tends to lean toward the etched side, a slight digital glaze marring the proceedings. The very low distortion of the A1.5 allows it to subdue, if not entirely tame, this aspect of the recording.

Overall, the A1.5, particularly when I mated it with all four Wilson loudspeakers, had great clarity. It was almost like starting into the void. It made me think of a trip that I made a few years ago through Oregon that included a visit to Crater Lake, the deepest lake in America and famed for its pristine blue water. It has a hallucinatory effect: You stare down it from the side of a cliff and feel like you can see all the way to the bottom. That’s the kind of feeling that the CH Precision gear can evoke as well. You get the sense that you’re seeing into and around the instruments all the way to the rear of the hall.

At the same time, the CH equipment does not attain this kind of nuanced detail by bleaching out the sound. If anything, it tends to be voiced on the warmer side, leading some detractors to accuse it of being overly warm and fuzzy. That wasn’t my impression. I didn’t hear anything resembling the kind of warmth that is often associated with tube amplifiers. What I did keep hearing was clarity on steroids.

Where it didn’t quite match the pricier amplifiers that I’ve recently had in my system like the D’Agostino Relentless, which comes in at a cool $250,000 a pair, or the Ypsilon Hyperions, is in the ultimate degree of relaxation and grip and control. It may sound wacky, but the fact is that there is even more performance to be had than this amplifier delivers. That’s something CH knows—and why you can go up the line in its offerings to bigger and better amps. But make no mistake: What the A1.5 offers you is more than an introduction to the high end. It constitutes an invitation to a high level of performance that is unlikely to leaving you feeling neutral about its sonic prowess.

How To Optimize Digital Streaming With Optical Fiber