My coverage category had some new and interesting entries at this year’s calmer, and better organized, “High Performance Audio” section of CES held at The Venetian, Las Vegas hotel. A trend I have noticed over the last couple of years is the entry of more northern European electronics companies into the North American market. All but one company listed below are based in northern Europe, and among those, only one was established in the U.S. before 2010. 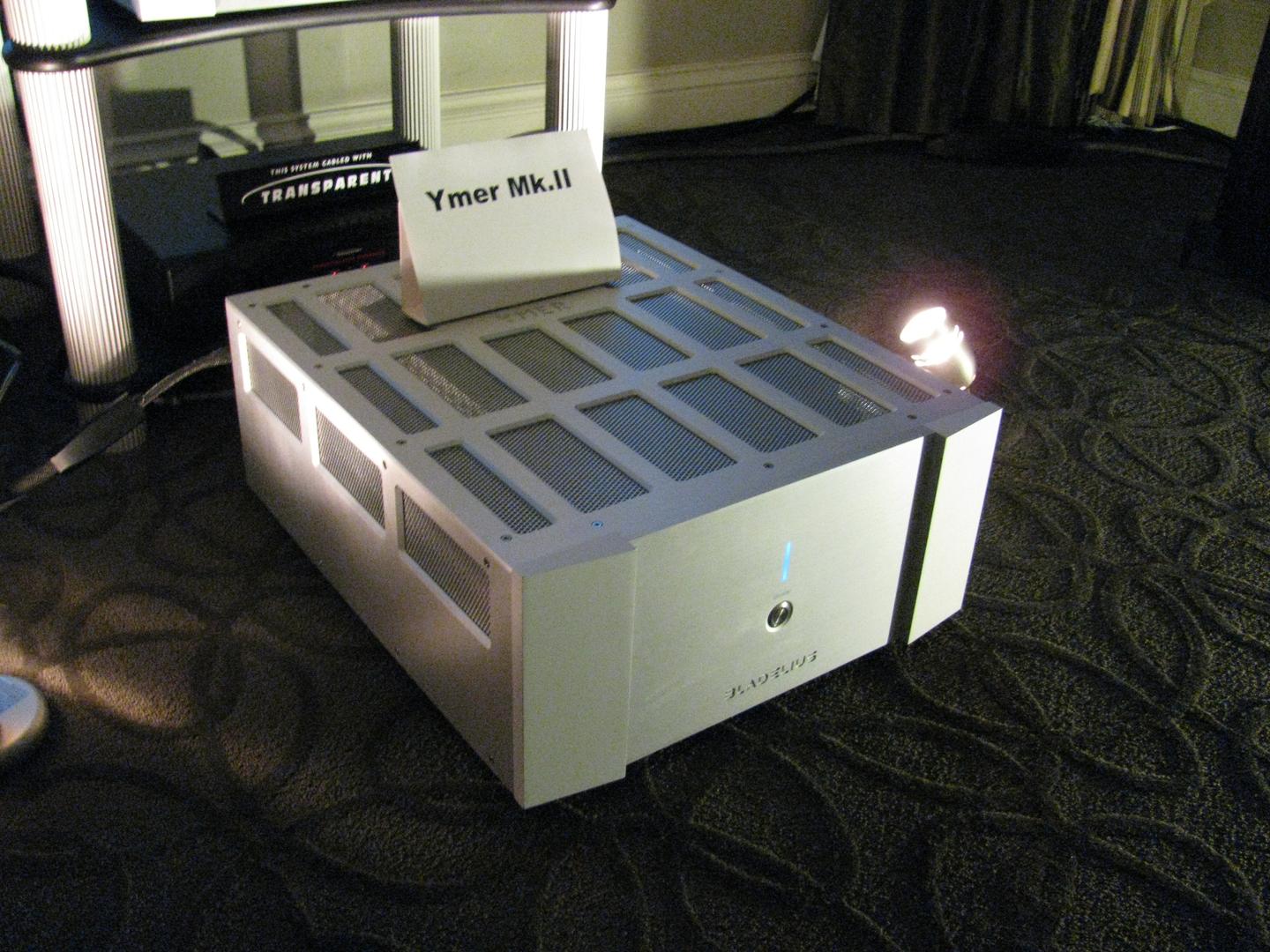 Bladelius of Sweden offers, among other products, two integrated amplifiers: Tyr Mk II (150W) for $2600 and Thor Mk III (175W) for $3500. (Mike Bladelius apparently was a designer for Threshold and has done some consulting with Classé.) I heard the more powerful Ymer Mk II power amp (300W), priced at $12,000, being fed by Bladelius’ Embla all-in-one CD player/ripper, DAC/server, and analog preamp ($9000 as configured) paired with Vienna Acoustics Beethoven Concert Grand speakers all wired up with Transparent Audio Reference XL cables. The sound was clean, open, full-bodied, musically engaging, and quite revealing. The Thor Mk III integrated is also available in a Novitas version which includes an on-board asynchronous USB DAC and a phono stage capable of supporting both MM and MC cartridges. It has upgradable versatility, ease of use, and rather nice, understated good looks, too. Bladelius’ also makes other power amplifier models, a disc player, and separate line- and phono stages. It has apparently been manufacturing in Sweden for over 18 years. 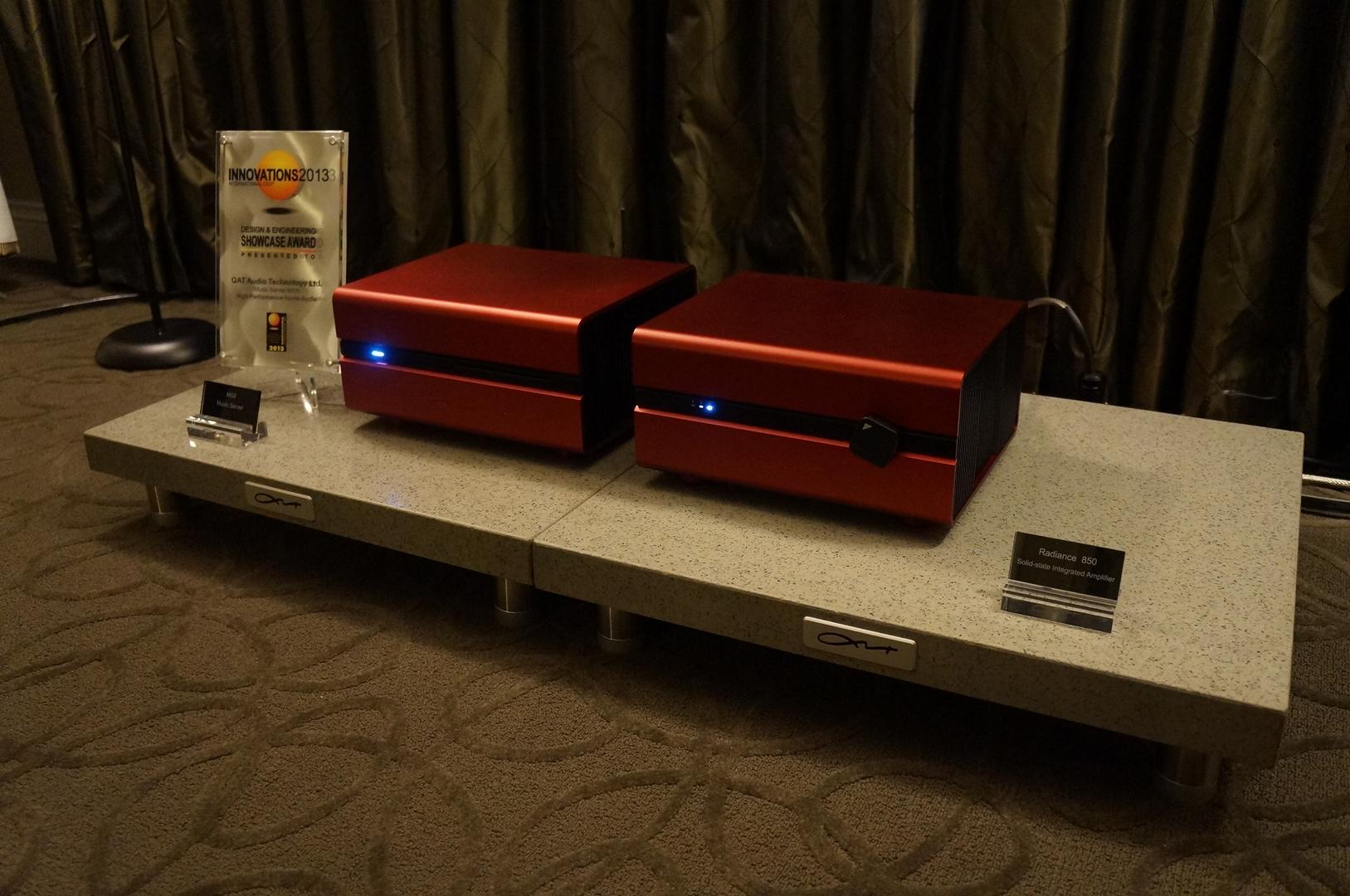 A real surprise at last year’s CES came from a completely unknown (at least to me) Chinese company called QAT Audio Technology, LTD. I did not write about QAT in my 2012 report because I was unsure about whether it could figure out how to survive in the U.S. market, and I experienced language translation problems with the chief engineer/president James Zhang—and pretty much everyone else associated with company—because I do not speak Chinese. QAT came back to CES this year and brought a better English speaker. QAT offers more upscale electronics (and a speaker line), but the model that caught my ear two years in a row is the Radiance 570 integrated amplifier. At $3900, it is not exactly inexpensive, but it had a sonic sophistication and musical verve, in two different setups, and this confirmed to me that QAT knows what it’s doing on the design side. Fronted by QAT’s own Radiance MS5 music server and paired with Atohm GT 3.0 speakers and Analysis Plus Oval cabling, the sound was refreshingly liquid, well balanced, lively, and detailed without sounding forced or overbearing. The 570 puts out 100W per channel, has two RCA inputs and one XLR, weighs a hefty 33 pounds, features dual mono construction, runs in Class A/B, and comes in silver, black and—my favorite—red. I wish QAT much luck in western markets. 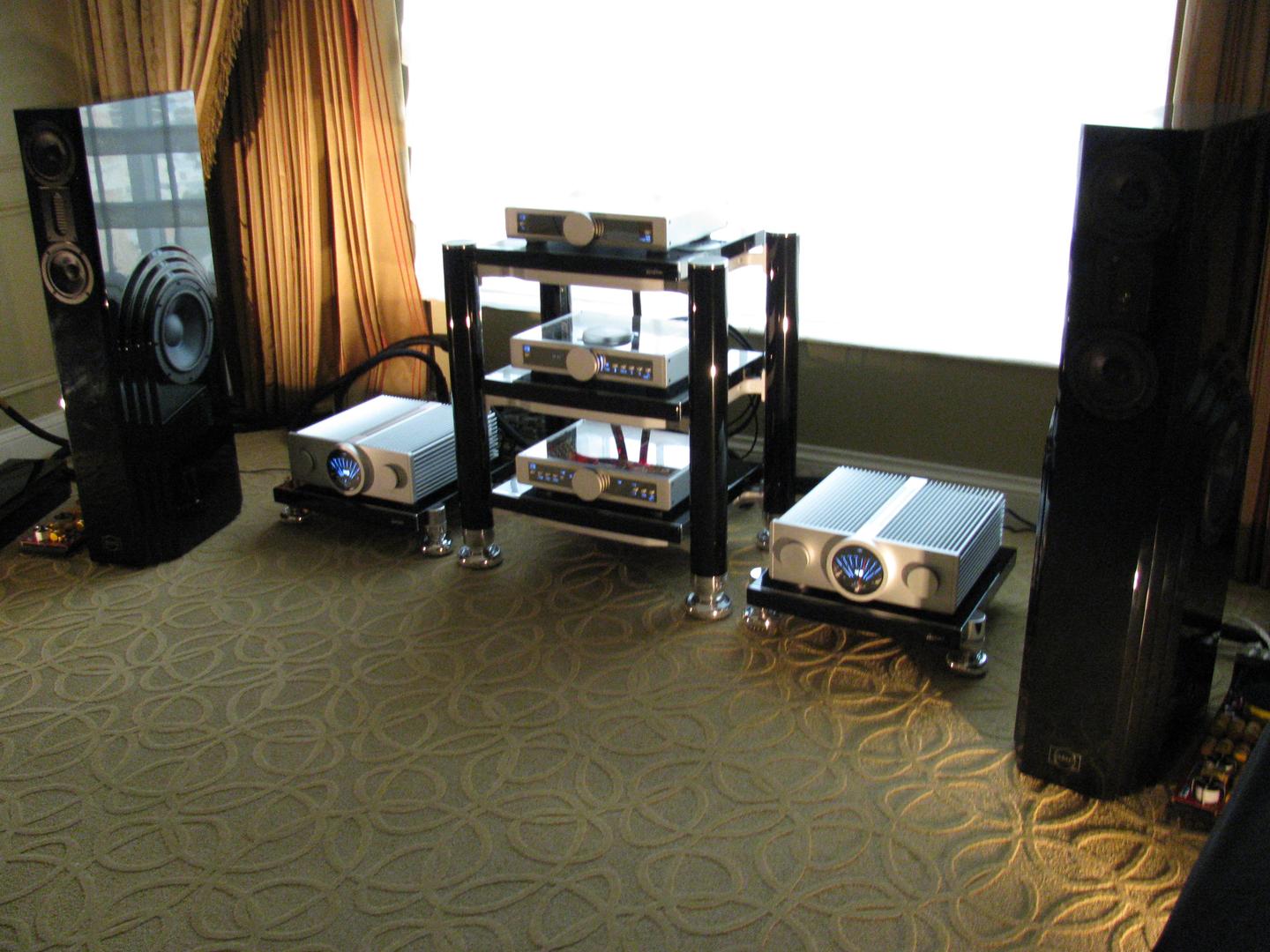 Another company I wanted to cover last year, but couldn’t because of space limitations, is German-based Balanced Music Concepts, better known as B.M.C. Audio. I was able to spend quite a bit of time with president and designer Carlos Candeias, an affable person with a fascinating multicultural back ground and fluent in Portuguese, Spanish, German, English, and Mandarin. Candeias worked for 26 years in the OEM business as a designer and manufacturer and learned how to avoid many common pitfalls which can plague high end companies. BMC has taken great care to devise circuit layout and modular designs to reduce manufacturing costs, conclude unique distribution and dealer agreements to reduce conflicts among all parties concerned, and seek out supplier contracts which make long term relationships between suppliers and purchaser mutually more advantageous than short-term cost cutting motives. Also, since BMC is well capitalized, when Candeias needs to execute something unique or proprietary, BMC builds it in its own factories, such as BMC’s brand-defining and impressive mold-injected aluminum chassis and power meters. All of this care and characteristic German thoroughness allows BMC to offer high-performing, nice looking components at lower prices than is typical of the High End production model of relatively small production runs, inefficient production methods, and low economies of scale supply chains. The CS2 ($8390), for example, can be configured to run as a 200W integrated amplifier or a stereo power amplifier and has some unique, circuit-simplifying technology. Look for Neil Gader’s full review in a future TAS issue. I heard the BDCD 1.1 belt-driven CD player/transport ($6,290) feeding a DAC1 ($5,990) analog preamp with an on-board 24/192-capable DAC which will accept BNC, USB, S/PDIF, AES/EBU, Toslink, as well as BMC’s proprietary Superlink with its four dedicated BNC connectors (used with the BDCD 1.1 as a transport), along with three analog inputs and two analog outputs. This front end drove a pair of M2 200W mono amplifiers ($14,000 per pair) which, in turn, powered a pair of BMC Arcadia speakers ($36,300). The sound was pure and direct without sounding clinical or dry. Considering some of the new technology employed in BMC electronics, some of which is said to eliminate an amplification stage (with no global feedback), the apparent build quality and cosmetics, and—most of all—the good sound of the system, I thought BMC’s pricing was well within industry norms—if not considerably lower. 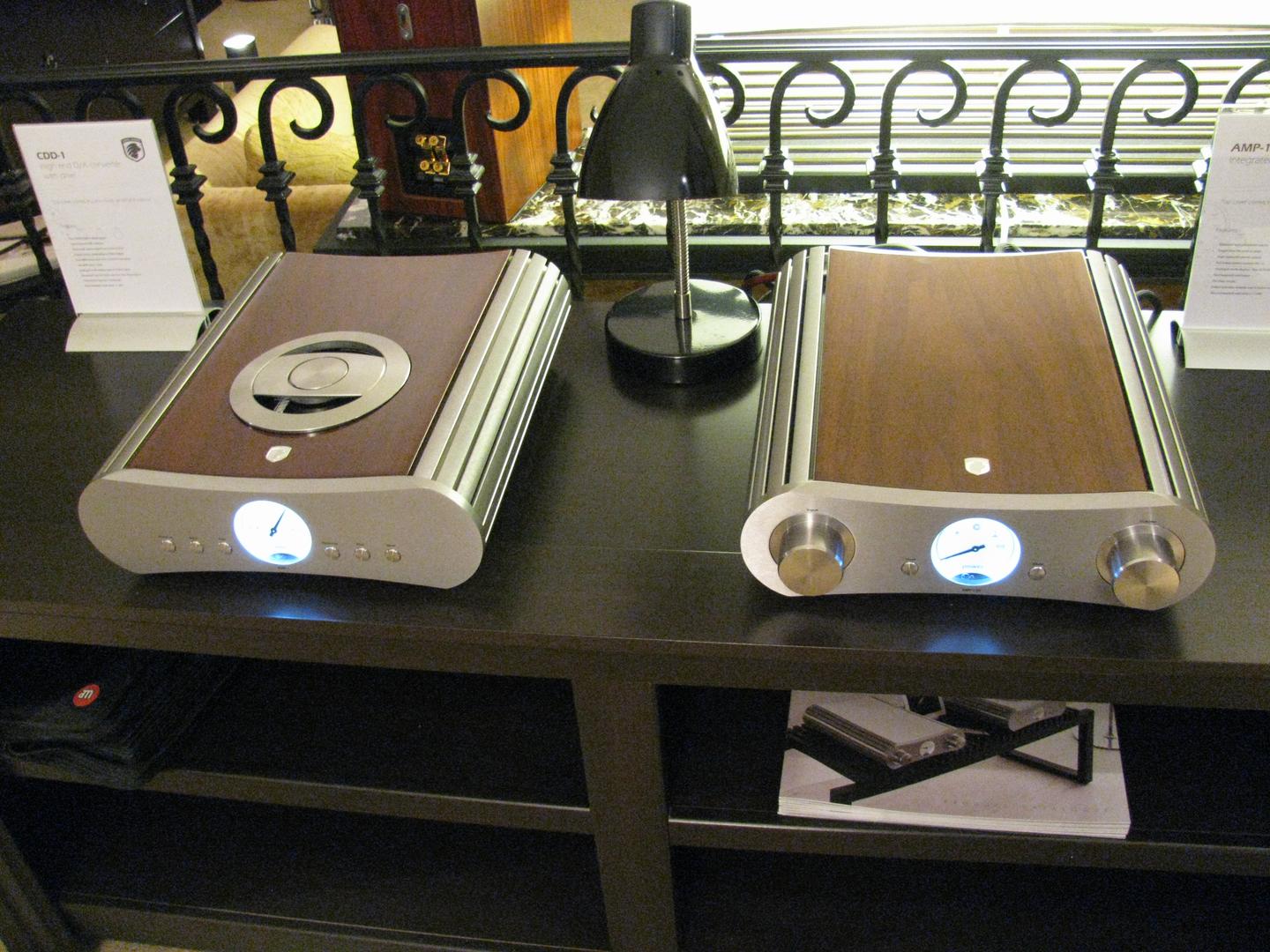 A relatively new Danish company, Gato Audio, is distributed in North America by Aerial Acoustics and demonstrated a few products, including the Gato Amp-150 integrated amplifier ($8300). It generates 150 watts, has five inputs (on XLR, four RCA), and features very attractive cosmetics: 13” wide beveled face plates, curved sides, a nifty center power dial and input selection indicator, and the top plate can be ordered in gloss white, gloss black, or walnut finishes to match one of Gato’s FM Series speakers. The Amp-150 has similar single-MOSFET-per-phase topology I discussed in my GamuT D200i review (Issue 229). I heard the Amp-150 with its matching CDD-1 DAC/CD unit ($8000) and a pair of Aerial 20T speakers. The resulting sound was detailed and highly musical, dynamically compelling, and the bass was deep-reaching, taught and tuneful. I believe the Amp-150 is currently under evaluation by Wayne Garcia, so expect a review soon. 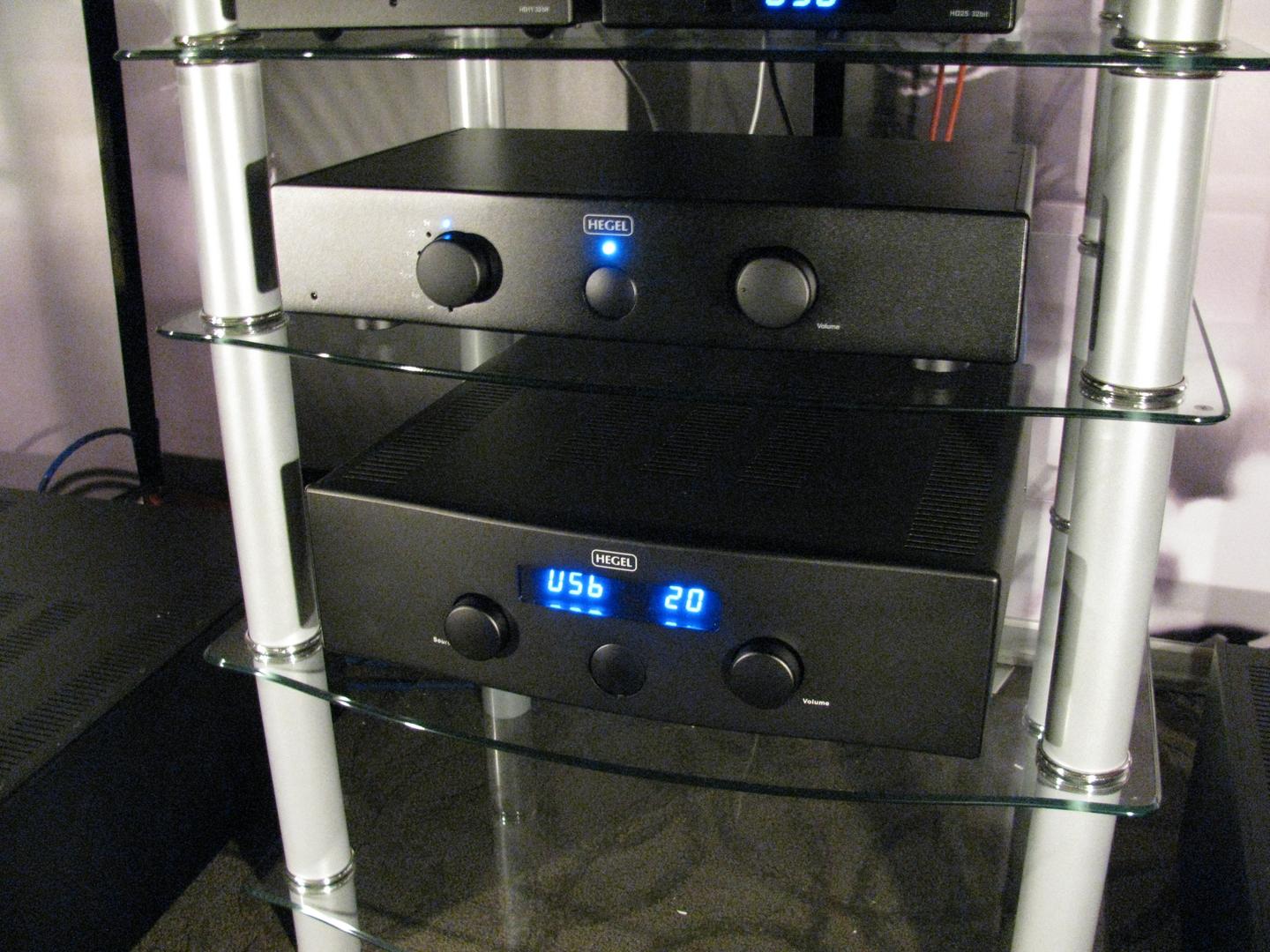 Hegel Music Systems unveiled two new products at CES: P20 preamplifier and H300 integrated amp. Neil Gader has the H300 under review, I am told, so I will just summarize things here by saying the H300 is, according to designer Bent Holter, not a beefed up H200 (Issue 211), but rather a complete redesign of all the major circuit boards, volume control, and power supplies. The H300 features 250W per channel and a slightly scaled down version of Hegel’s latest new separate HD25 24/192 DAC ($2500). One of the main lessons learned in the development of the H300 was applied to the new P20 preamp ($2900): the fully balanced, micro-controlled attenuator technology is said to be superior to the attenuator in the older H200 and that of the P20’s predecessor, the P4. Great attention was also paid to developing the P20’s power supply for reducing underlying noise throughout the signal path. The P20 is offered at a much lower price but performs at a higher level than the P4 ($4600) it replaces, again, according to Holter. Hegel revealed that it is willing to take a lower profit margin on the P20 as its way of encouraging consumers, who may be stretching their budget to buy one of Hegel’s larger power amplifiers, to opt for the P20 and still have very good preamp performance. 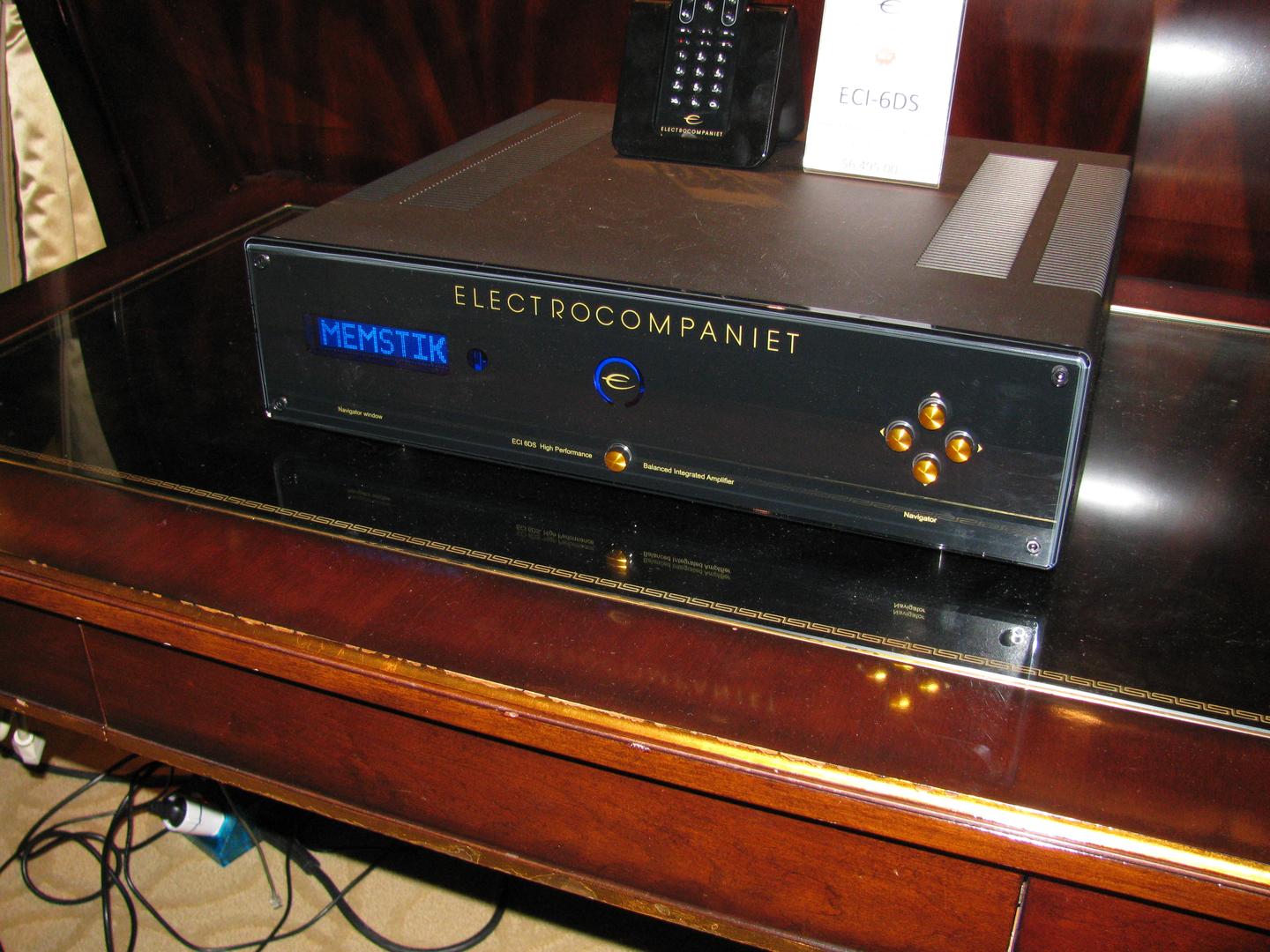 The well established Norwegian Electrocompaniet debuted its ECI 6DS integrated amp ($7,495). It is essentially an ECI-5 Mk II (120W) with wireless streaming, 24/192 DAC provisions, and features a graphical remote control. Electrocompaniet’s Peder Beckman explained the goal of the ECI 6DS is to make it a useful tool in a mixed-generation, household multi-media entertainment center. Electrocompaniet envisions various devices being connected to the ECI 6DS, such as portable personal music players, a video system, a music streamer (wireless or directly connected), internet radio, etc. and then various members of the house using it for their particular needs as they like. The front panel has classic ECI cosmetics: elegant with simple controls for just input selection and volume. The accompanying remote hand set is meant to control all of the digital inputs (as well as volume and analog inputs). The ECI 6DS looks like a very well thought out product.

At a system price of $7000 (sans cabling) for a Primare 122 integrated amp/DAC (80W), CD22 CD player and a pair of Vienna Acoustics Mozart Grant Symphony Edition speakers, the sound was pretty darn nice.

Raidho Acoustics D-1 debuted their update to the already fantastic sounding C1.1. The D-1’s  mid-woofer is impregnated with a top coat of 50% industrial diamond and 50% graphite. Sonic results are stunning!

The Violin Speaker uses a real violin for the mid and upper frequency driver mounted atop an Italian-styled pillar containing a sub-woofer.  Sound: overly mid-rangey, slightly nasal, but surprisingly real on some material. Looks great.

Besides the obvious computer audio trend, the continuing growth of vinyl releases and phono products is also evident. The combined result is the decline of the “perfect sound forever” compact disc.