While the effectiveness of trickle-down economics has been hotly debated for some time, there’s no arguing about the effectiveness of trickle-down technology in high-performance audio. Many relatively affordable amplifiers, preamplifiers, and integrated amplifiers premiering at CES were derived from their reference counterparts, and they include some of the key design elements that make those flagship products so sonically engaging. While the derivative units typically sacrifice some power, features, and/or other refinements, if you’re willing to accept a few tradeoffs, the good news is that you can get more than a glimpse of the sound of the reference units at a considerable savings. Several of these high-value bargains premiered at this year’s CES.

Alongside technology migration, other trends in this category include more integrated features to enable easier streaming, and the incorporation of high-performance headphone sections. DACs are also appearing in more preamplifiers, integrated amplifiers, and all-in-one devices and their performance is often surprisingly good, making streaming and system set-up a breeze. Additionally, the inexpensive and relatively poor-sounding headphone sections of the past have been replaced with more sophisticated, higher-performance designs. The headphone output is no longer an afterthought, but a serious design implementation.

Unfortunately, there were more deserving products to be highlighted than space constraints allow, and a foot injury kept me from visiting those in off-site locations. My apologies; but as you will see below, there were plenty of high-value performers in this segment that merit your consideration. 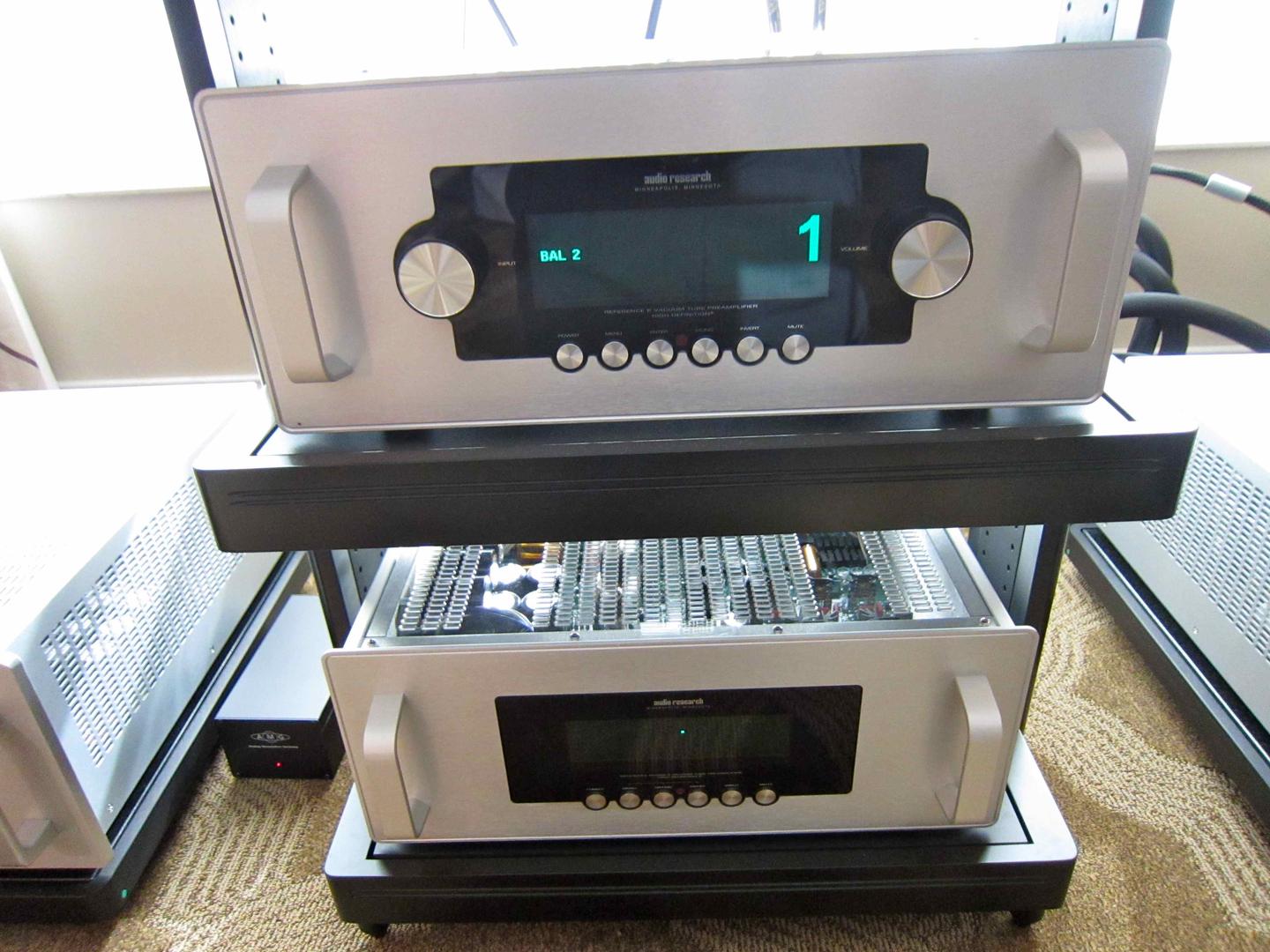 Audio Research Reference 6 linestage
The Audio Research Reference 6 linestage ($14k) continues the evolution of the company’s Reference Series and improves upon the performance of its predecessor (the Reference 5SE) via a refined circuit design utilizing six premium 6H30 tubes (up from the four tubes in the Reference 5SE), a larger power transformer, and higher-quality parts and components. It sports a tube-regulated power supply, a new volume control with finer gradations, and a new chassis with more structural rigidity to isolate the unit from mechanical interference. Combined with the Audio Research Reference 2 phonostage, AMG Viella V12 with Clearaudio Goldfinger cartridge, Audio Research 250 SE monoblocks, Sonus faber il Cremonese speakers, and Shunyata Research cabling, music emerged from a jet-black background with outstanding clarity, coherence, and time accuracy. There was surprising extension at the frequency extremes but without any forwardness in the highs, as well as plenty of slam in the bass. The Ref 6 is a great companion to ARC’s 250 SE monoblocks. 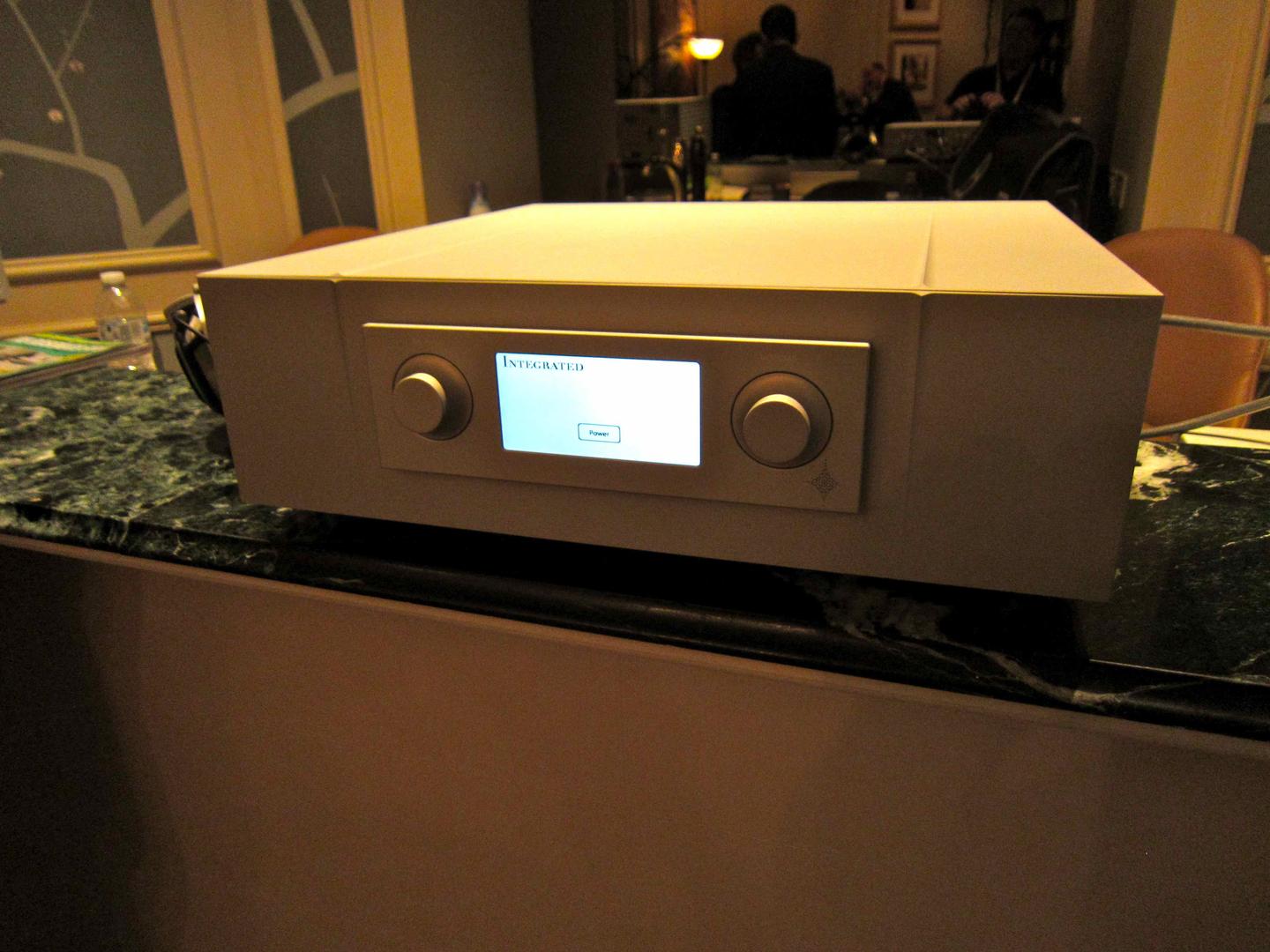 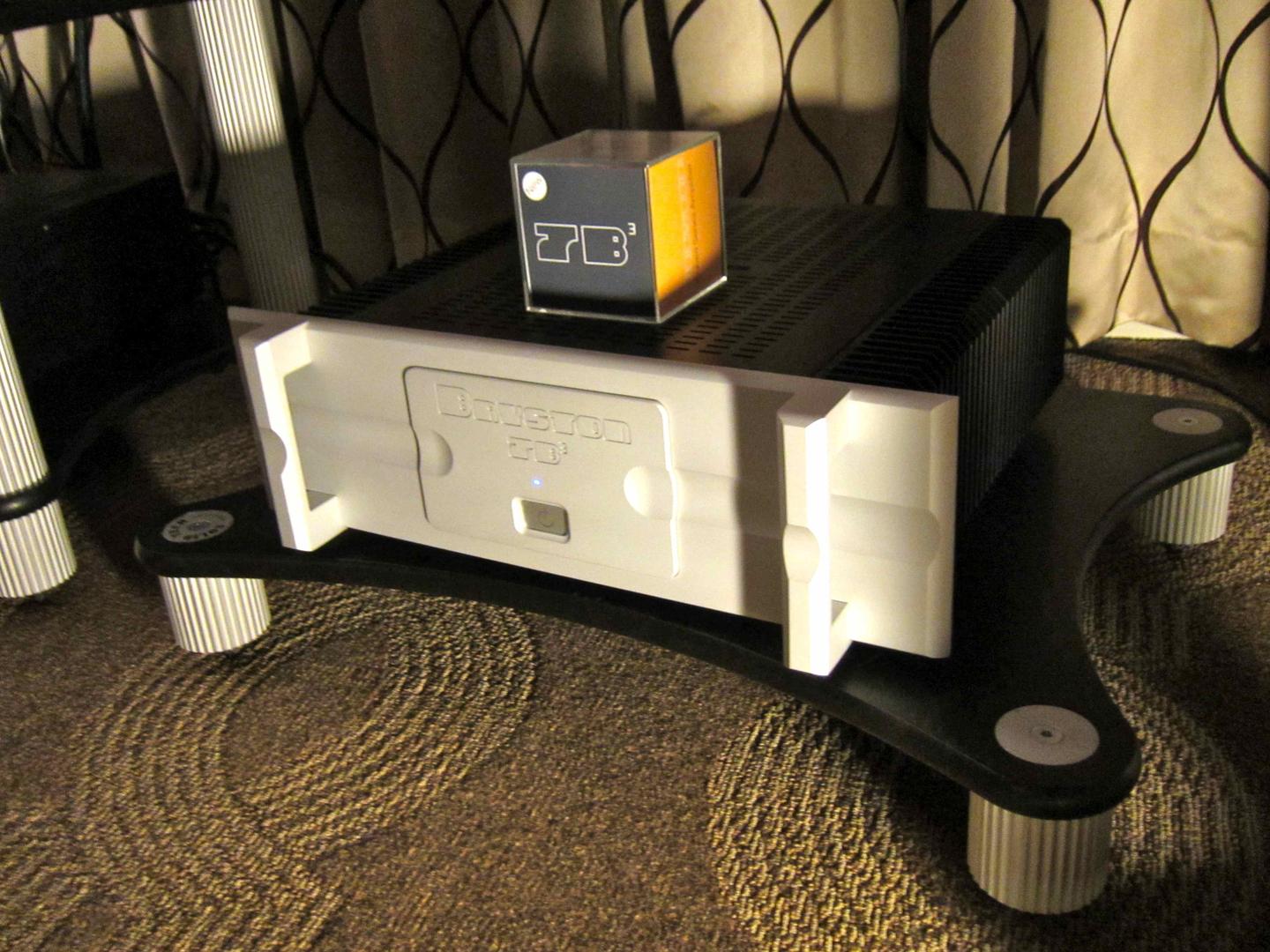 Bryston Audio Cubed Series amplifiers
Dramatically lower distortion, improved linearity, and increased clarity are hallmarks of Bryston’s new Cubed Series amplifiers. At 600Wpc into 8 ohms, the 7B3 (approximately $5.5k each) employs Bryston’s patented input stage with an array of twelve active devices and produces astonishingly low distortion measured at just 1/1000th of 1 percent. It also offers major reductions in noise (EMI, RFI, and common mode), and employs the company’s Quad-Complementary topology that mimics the characteristics of a Class A design, but with far lower distortion. As part of an impressive all-Bryston system, the 7B3 produced an expansive soundstage with great dynamics, as well as welcomed harmonic richness in the upper bass and lower midrange. 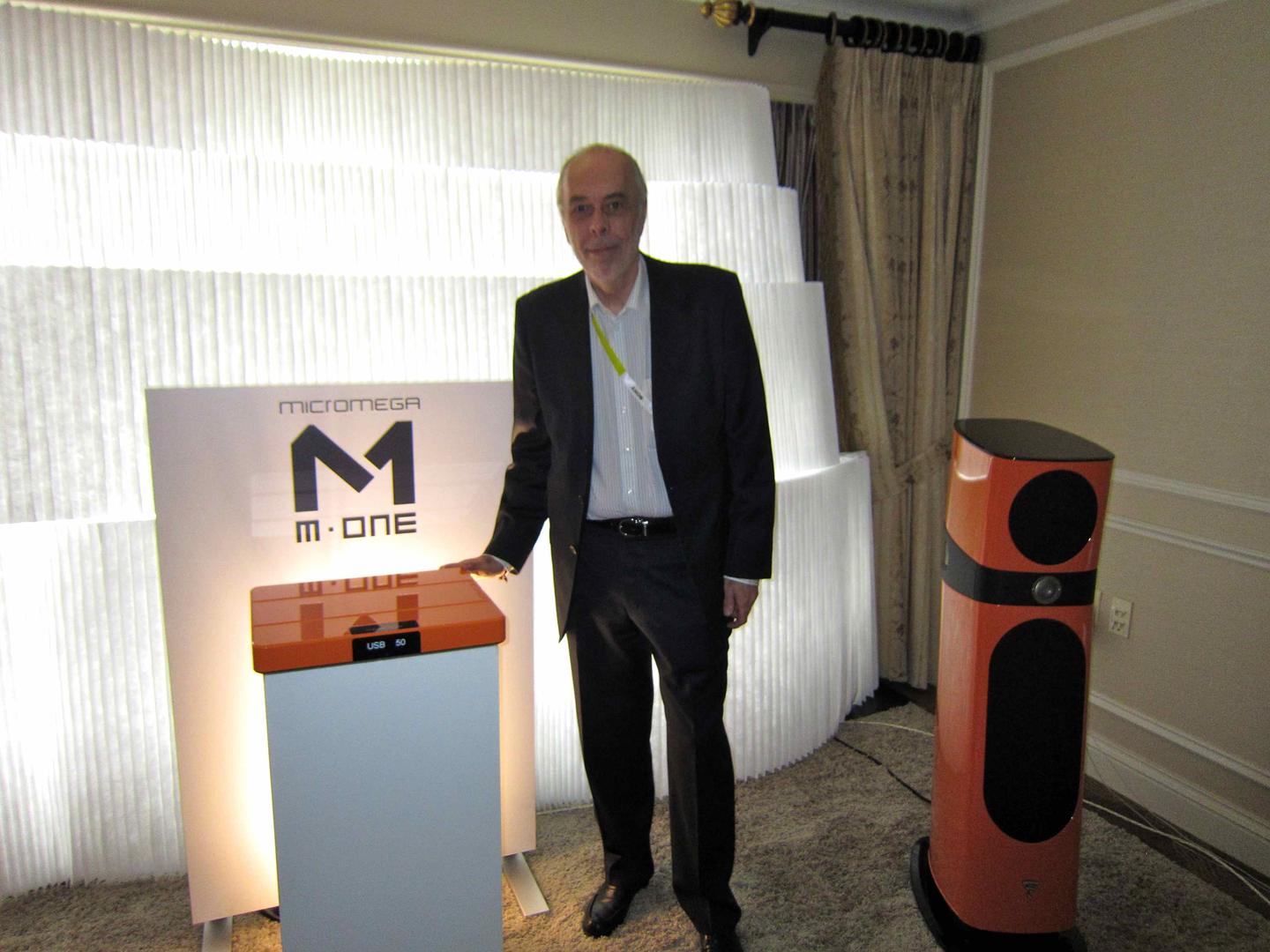 Micromega M-One 100
The Micromega M-One 100 ($4000) is at the forefront of the latest “all-in-one” products with lots of connectivity (Airplay, Bluetooth, Ethernet, WiFi, AES3, SPDIF, USB, etc.), a switchable MC/MM phonostage, balanced and unbalanced inputs, and (optional) automatic room and phase correction. The M-One has to be one of the most attractive products in high-performance audio! Its finish matched the gorgeous Focal Sopra II speakers, and if that combination doesn’t pass the WAF test, I suspect nothing will. However, its elegant looks are only part of this special unit’s story. Crafted from a single block of aluminum, the M-One is a Class AB, dual-mono design producing 100 watts at 8 ohms. It decodes up to 24-bit/768kHz PCM and DSD, and has a very slick “binaural” system to enhance the performance of headphones. Driving the Focal Sopra II speakers, the system sounded “like music” with great timing (due to the M-One’s very high-end clock), low noise, and natural timbres. 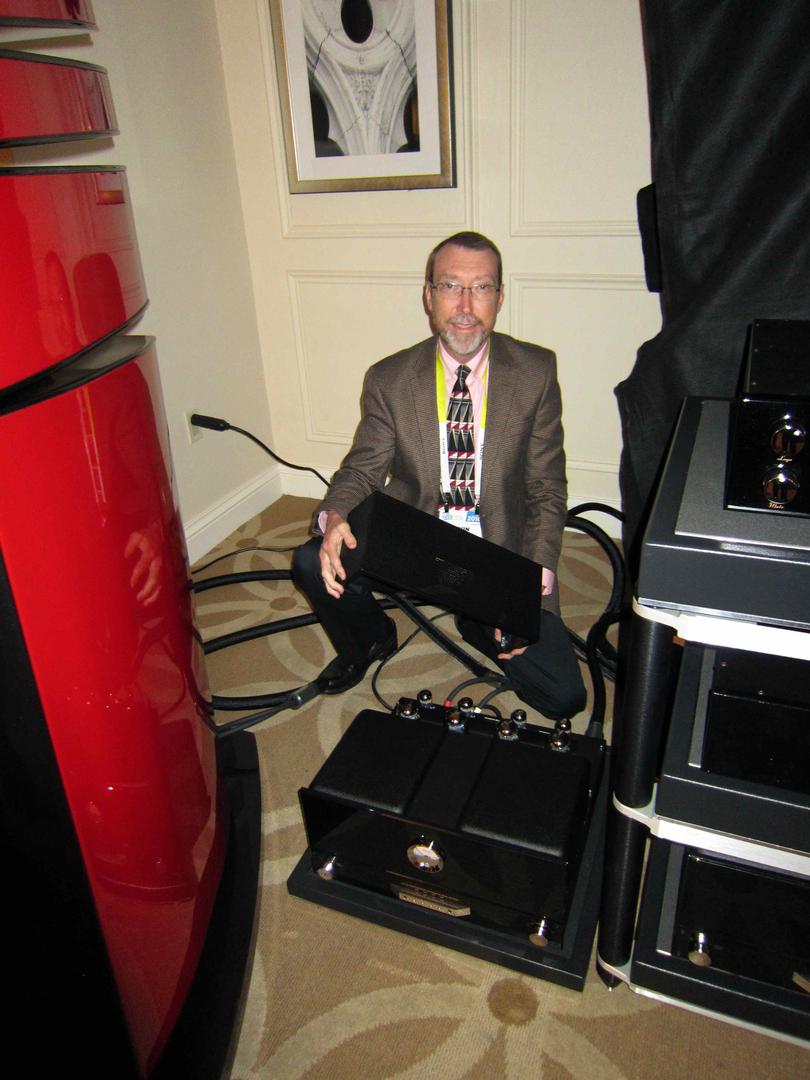 VAC also introduced its Renaissance Mk V linestage ($9900 or $12,400 with phono), which uses a similar circuit topology as its Statement linestage, including a dual-mono design, and zero negative feedback.

Audio Alchemy DPA-2 stereo power amplifier
Audio Alchemy’s DPA-2 stereo power amplifier ($2995) delivers 250 watts per channel into 8 ohms or 700 watts in mono. According to designer Peter Madnick, the DPA-2 uses all the same parts as the company’s DPA-1 but has a bigger power supply. Driving TAD monitors via Wireworld cables, the sound was very engaging, natural, and dynamic—undoubtedly owing to the amplifier’s Class A discrete FET input stage with a separate linear supply in front of its Class D output stage. The DPA-2 is a great value!

Classé Sigma 2200i integrated amplifier
Classé showed the newest product in its Sigma series, the Sigma 2200i integrated amplifier ($5500). It utilizes the company’s proprietary digital amplifier technology, which enables the signal to remain in the digital domain until it reaches the amp’s output filters. The audio signal can go straight from the preamp section’s DSP into the amplifier’s DSP without the typical D/A and A/D conversion losses one associates with DACs. It includes a full suite of digital inputs and three sets of analog inputs (one may be used for phono).

Moon by Simaudio Neo ACE all-in-one
The newest addition to the Moon Neo Series is the ACE, an “all-in-one” integrated ($3500) with streaming high-resolution DAC. The DAC supports DSD decoding (up to DSD 256) and 32-bit/384kHz PCM, and the unit includes a moving-magnet phono preamplifier and eight digital inputs, including USB, SPDIF (2), Optical (2), Bluetooth, WiFi, and Ethernet. It features Moon’s MiND module, which provides a full graphic interface to access your digital music library. Power output is 50 watts per channel into 8 ohms. 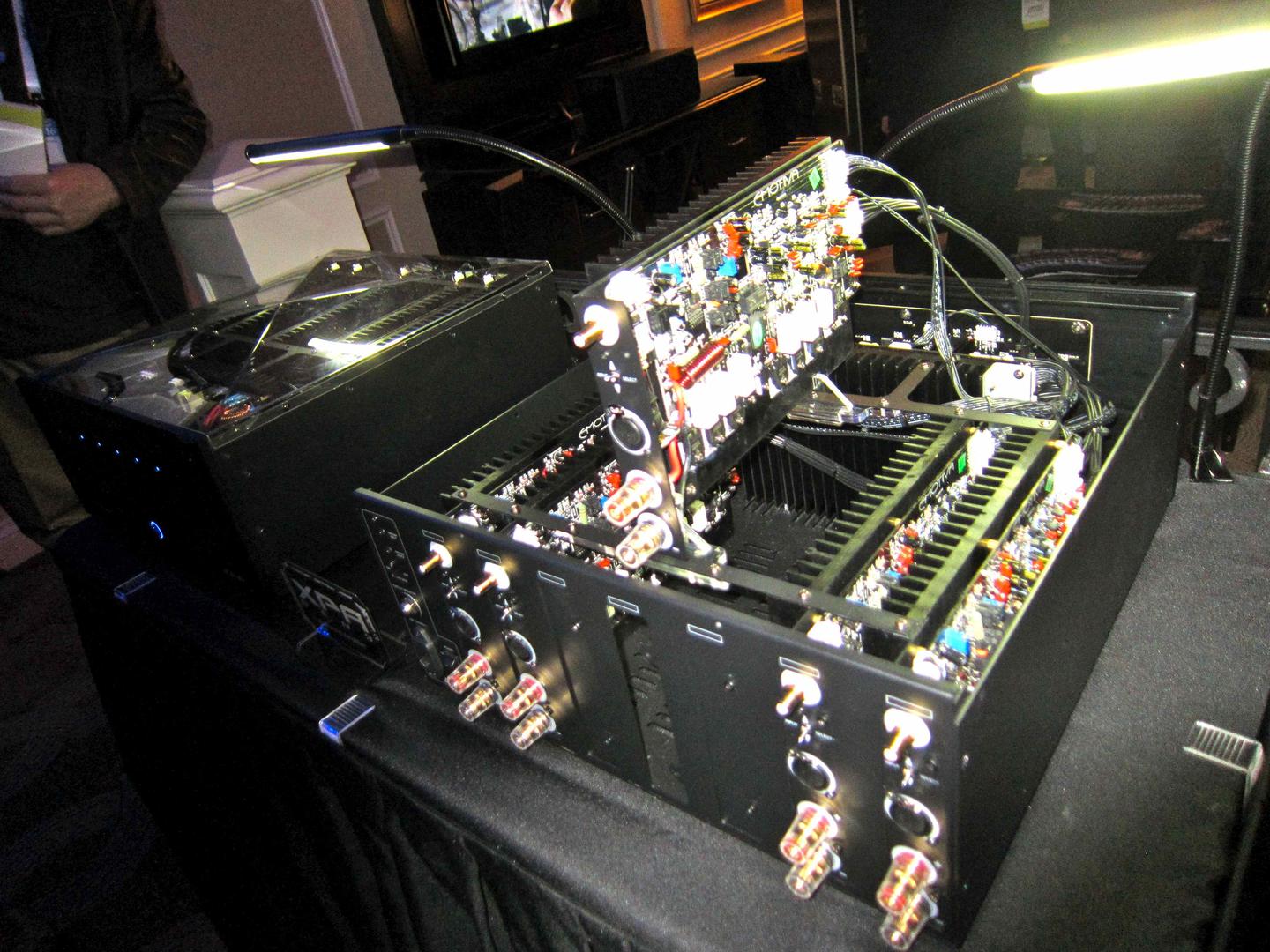 Emotiva XPA Gen 3 amplifier
Emotiva’s new XPA Gen 3 amplifier ($999) has an innovative architecture (like a bus-board computer, similar to what Cello offered) that enables additional amp modules to be easily added, so one can go from a 2-channel stereo unit to a 7-channel system. All modules are capable of 350 watts into 8 ohms.

Rogue Audio RP-1 preamplifier
Rogue Audio introduced a new preamplifier ($1695), the RP-1 that will drive lower-output moving-coil cartridges, as well as moving-magnets. The tube linestage (2 x 12 AU7’s) is mated to a solid-state phonostage. In a system with a pair of Rogue Audio Apollo Dark monoblocks, Nottingham ’table with Kiseki Blue cartridge, and Eggleston Works Camilla SE speakers, the sound was detailed and dynamic, and the RP-1 did not diminish the broad, deep soundstage the Kiseki is able to produce. Very musical! 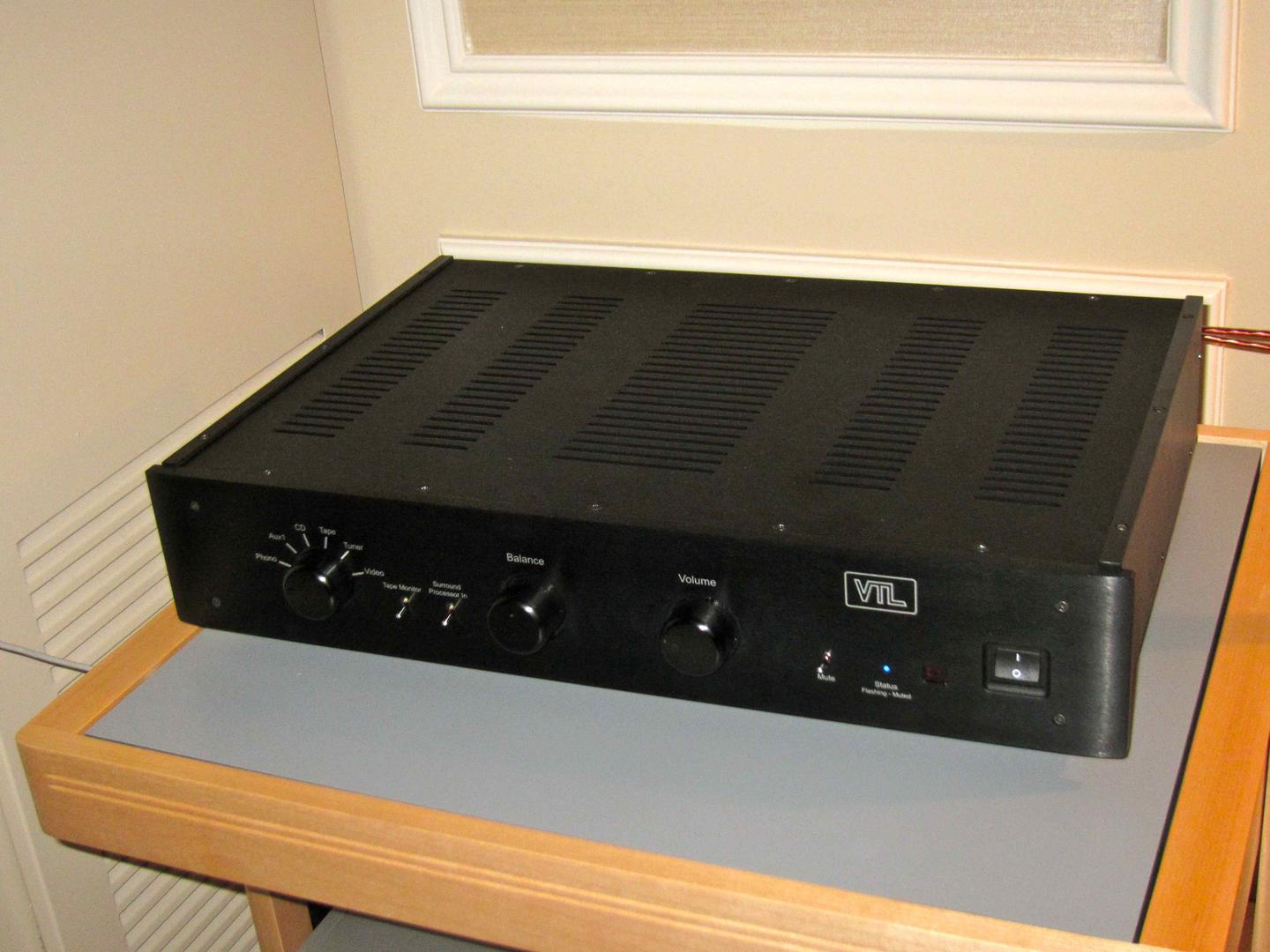 VTL TL2.5i preamplifier with phono option
VTL’s TL-2.5i all-tube preamplifier ($5000 with phono) improves upon its predecessor (the TL-2.5) with significant upgrades to audiophile-quality parts within both the linestages and phonostages. The linestage offers user-selectable gain switches, and the phonostage supports both moving-magnet and moving-coil cartridges with user-adjustable load and gain settings. Mated with the VTL ST-150 stereo amplifier, a Spiral Groove Revolution turntable system with Lyra Etna cartridge, Nordost Odin 2 cables and power cords, and Wilson Audio Sabrina speakers, the sound was captivating with very clear transients on cymbals, luscious massed string tone, and very low noise on vinyl playback.

Arcam’s new SR 250 2-channel receiver ($3600) offers plenty of connectivity with seven HDMI inputs and two HDMI outs. It employs Class G technology to produce 125Wpc, and along with Arcam’s DIRAC room correction system, all can be controlled via an iPad.

In addition to new media-players, German manufacturer AVM introduced its new 6.2 Ovation series of products: the A 6.2 high-current MOSFET integrated amplifier (225Wpc into 8 ohms) with a Class A headphone amplifier and a fully balanced and DC-coupled input stage ($13,900); the similarly powered high-current SA 6.2 power amplifier with three power supplies ($11,500); and the streaming-ready SD 6.2 preamplifier which incorporates a fully balanced Quad DAC ($11,500). Like the A 6.2 integrated, the preamplifier also includes a Class A headphone amplifier. 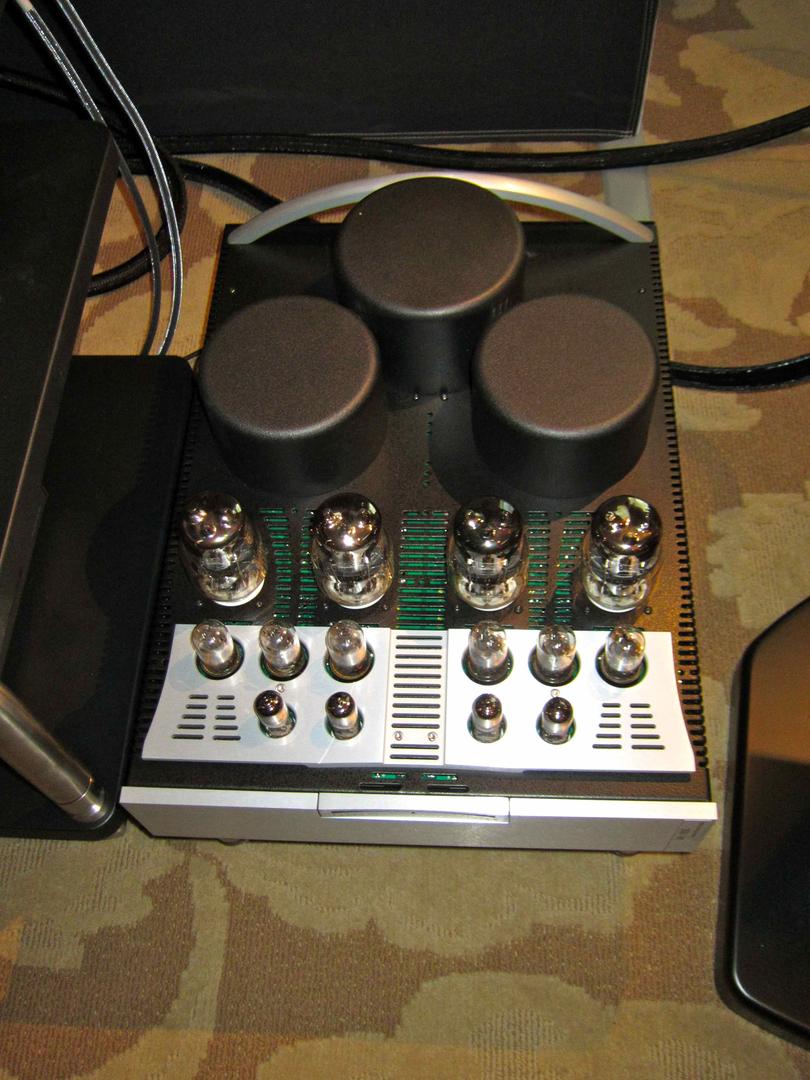 Balanced Audio Technology (BAT) introduced a big upgrade to its VK75 and VK75 SE amplifiers. The BAT VK76SE ($13,995) has a redesigned circuit board, and the same fuse-less protection circuitry, fully symmetrical triode circuit, active current sources, and other trickle-down technology from its flagship REX II amplifier.

Conrad-Johnson introduced the CA150 control power amplifier ($5000 or $7000 for SE version), which is similar in function to an integrated amplifier but eliminates the line-stage circuitry. It provides an advanced level control, seven line-level inputs, and a high-current bi-polar output stage similar to C-J’s MF2550 and MF2275 power amplifiers.

PS Audio was quietly displaying its BHK Signature preamplifier in prototype form. Designed by Bascom King, it’s a linestage with a built-in headphone amp. While pricing is still TBD, it is likely to be in the neighborhood of $6k.

On a Higher Note introduced a couple of new Luxman products in this category. The L-590AX MK II integrated amplifier ($9900) can drive difficult loads and features Darlington topology derived from Luxman’s 700/900 series amplifiers. The DA-250 Class A preamplifier ($2790) with a Class A headphone amplifier and USB DAC offers SPDIF (up to 24/192), USB (2xDSD), and PCM (32/192) inputs and its internal A/D converts analog inputs to 24/96 for easy transfer of vinyl to PCM.

NAD previewed its M32 Masters Series Direct Digital integrated amplifier ($3999, targeted for April delivery) that delivers 150 watts per channel into 8 ohms. The M32 is compatible with the BluOS app to control playback via a smartphone or tablet; the app also allows for centralization of music libraries and streaming services in addition to the ability to connect through a home WiFi connection for multi-room music listening. Another advantage of the M32 (and other BluOS-enabled components) is sound that’s closer to studio quality, thanks to a technology partnership with MQA (Master Quality Authenticated).

At the upper limit of this category ($15,000), was the Mark Levinson No. 526 dual-monaural preamplifier incorporating a high-resolution DAC and integrated phonostage. It is scheduled for May delivery.

Best Sound (for the money)
The Elac UB5 and GoldenEar Technology Triton 3+ loudspeakers are amazing values, but the stellar performance of a pair of the diminutive, wireless KEF Muo speakers ($350/each) was shocking.

Most Significant Trend
Higher-performance integrated amplifiers with a boatload of connectivity options, streaming-ready DACs, and much better headphone sections.

Most Coveted Product
If I won the PowerBall, the Soulution phonostage paired with a Continuum Obsidian turntable and Viper tonearm would be on my short list.

This was the year that the Capital Audio Fest became […]