On the first morning of the show, I sat next to Robert Deutsch of Stereophile in the McIntosh room, noshing on bagels and fruit while awaiting the start of the press briefing. We were tended by a fresh-faced young lady who worked for the company’s PR agency and who, it soon become obvious, was an audiophile innocent. Robert D. and I quickly warmed to the task of briefing her—and then observing her reaction. My category, I explained, was “high end” electronics. Robert D. jumped in, “That means the expensive stuff. Where would you guess we draw the line between expensive and not-so-expensive gear?” “Hmmm”, she pondered. “I dunno. Three hundred dollars?” When we both pointed skyward, she revised her estimate. “Five hundred dollars?”

And there you have it: the real world. A world where the idea that “inexpensive” would mean “below $12,000” is literally unthinkable. This chance encounter shaped my work as I roamed the Venetian and Flamingo’s cacophonous halls. I decided to challenge companies to defend extraordinary prices. When they would say, “Our new Blovius monoblocks are (very large number) a pair,” then I would say, “That’s a lot of money for an amp. What makes it worth that much?” I dismissed the ubiquitous response, “The sound!” as I couldn’t verify such claims under show conditions. So I pressed further and those answers told me much about where designers are focusing their efforts in an attempt to push the state of the art. 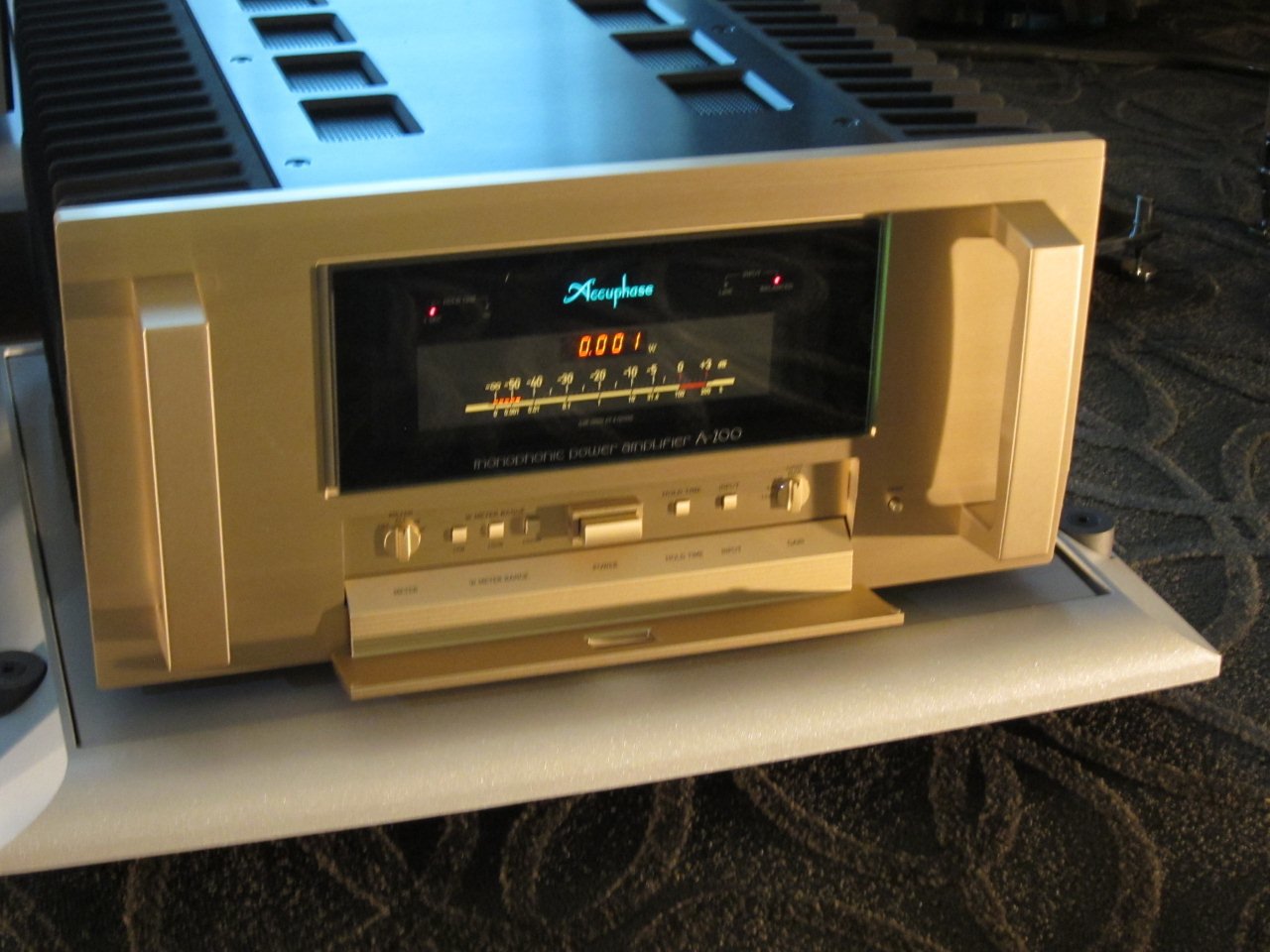 Normal Class A/B or D power amps with high output are sooo below $12k. In my category, wattage often never leaves the sonically superior Class A domain. Vitus is a case in point. Their new SS102 ($40k) stereo amp even allows users to choose between pure Class A, where it puts out 50 watts/channel (note: all output figures are at 8 ohms), or Class A/B, which bumps output to 120 watts. But that’s just the beginning. The gorgeous Accuphase A200 monoblocks ($69k/pr) boast 100 Class A watts, low impedance, and an insanely high (over 1000!) damping factor to exert iron-fisted control over speakers. Even higher up the power (and price) grid are the Venture V200 A+ monoblocks. For $120k/pr, you can have 200 Class A watts at your disposal. 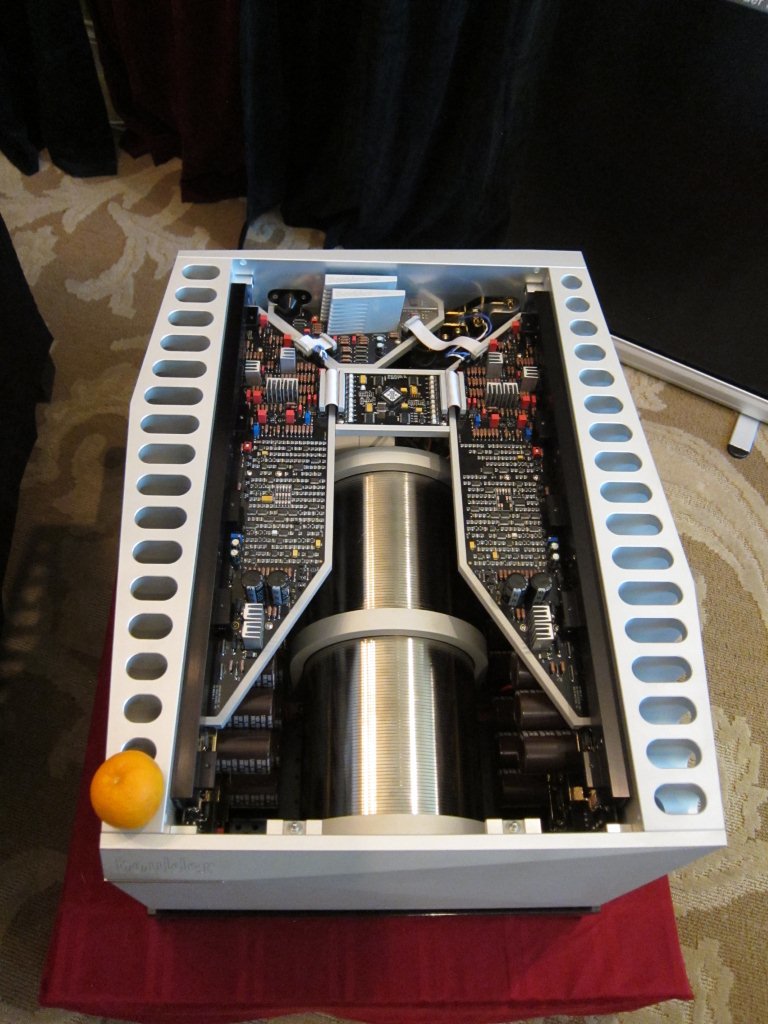 Think that’s a lot of pure Class A power? So did I—until I met Boulder’s behemoth 3060 ($115k, March), a stereo power amp that disgorges 900 Class A watts/channel from 120 parallel output transistors. This beast requires 240V AC and employs a sophisticated active biasing scheme to prevent it from blowing up.

Several power amps bucked the Class A tide, relying on Class A/B but with a twist or two. One such unit was the A1 ($37k) from Swiss manufacturer CH Precision. The 2×100 (or 1×350) amp, like all CH Precision components, benefits from designer Florian Cossy’s expertise (gained at Goldmund during its heyday) in extremely high bandwidth, high slew rate circuitry that ensures a fast response to musical changes.

The twist in Rome-based Audia Flight’s n4 stereo power amp ($24,950) is in the transformer. The amp’s 200 watts/channel come courtesy of an enormous 100 lb. C-core transformer enclosed in a double electromagnetic shield. (The company also introduced the n1 modular preamp, at $16,400.) Viola announced a new Crescendo stereo power amp ($22,500) to mate with the recently intro’d pre-amp of the same name. Machined out of solid billet aluminum, with the heat sinks molded right into the chassis, the amp puts out 125 watts/channel. The twist here is a feature: if you connect it to the Crescendo preamp, an iPhone/iPad app allows you to monitor its voltage, temperature and other status in real time. Way cool! 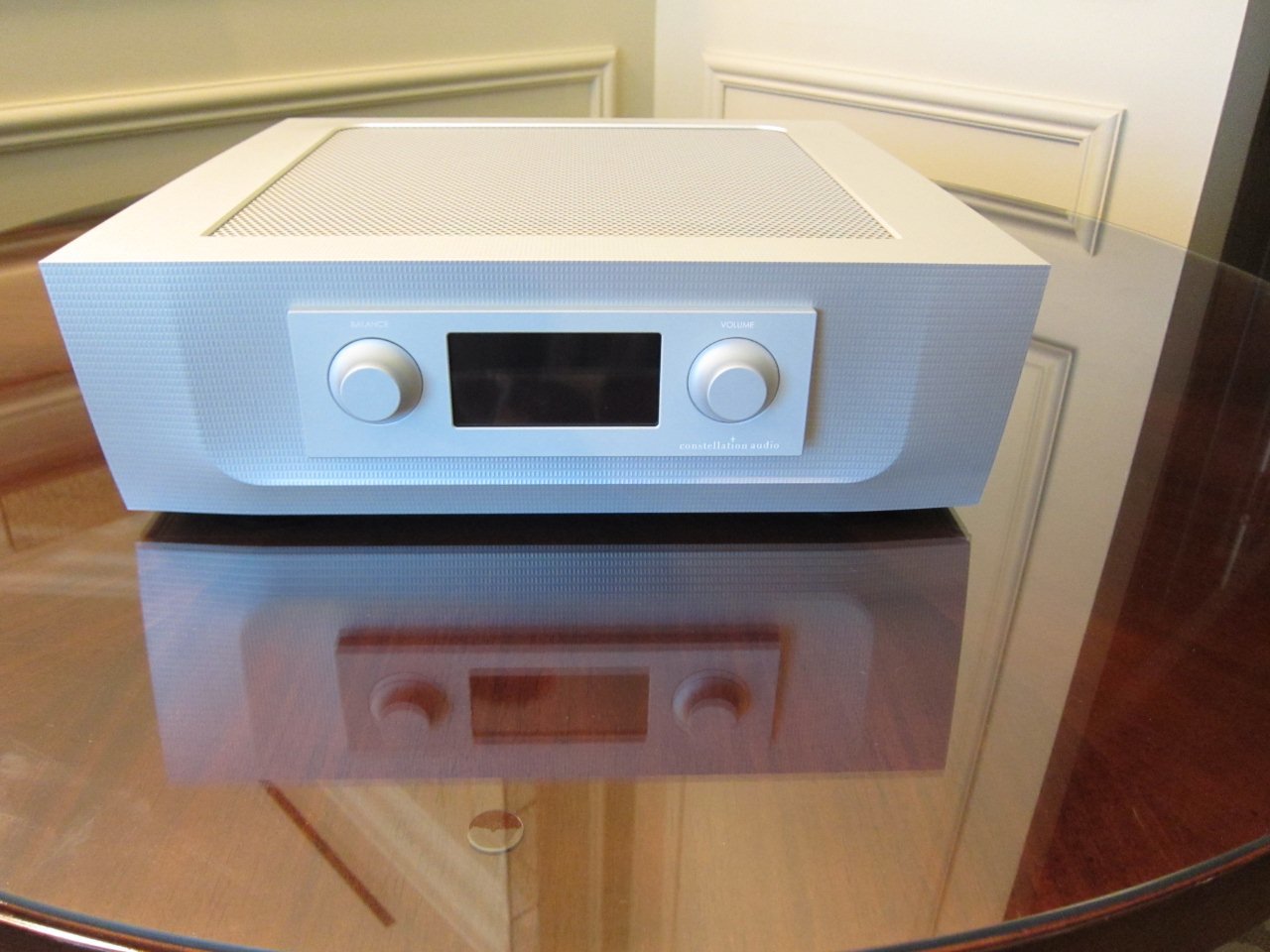 Constellation was showing new products as well as variations on past offerings. The Hercules II, for example, brings the original Hercules down from its tower (form factor, that is). The new shape, which will coexist in the lineup with the old, freed up space, opening the door for a Reference Series stereo amplifier. It will make 500 watts/channel when released in 2Q (price TBD). The Hercules II will also be available in monoblock form. Perhaps even more significantly, Constellation entered new product and price territory by introducing its first integrated amp—and its lowest priced component. The as-yet-unnamed 100 watt/channel piece will go for under $20k (final price TBD, 2Q).

Our old friend Kharma is back in the U.S. market after a five year absence. The company showcased the new Exquisite MP1000 400 watt monoblocks ($48k/pr) which, like several other new releases, goes about its business with very wide bandwidth (1.5Mhz) and a high damping factor. (Kharma also displayed the matching, $48k P1000 preamp.) 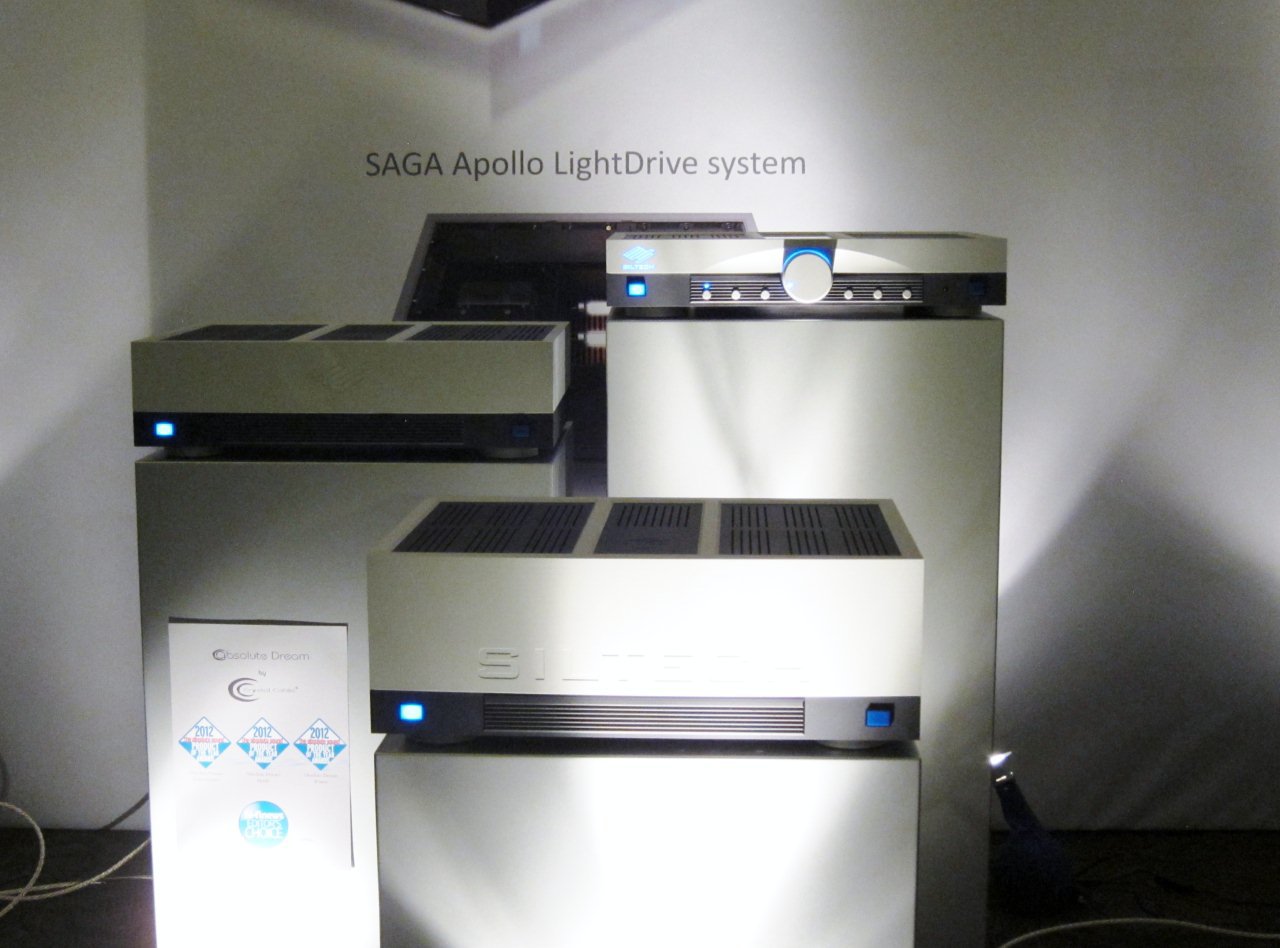 Several manufacturers took liberties with standard amplifier dogma. First and foremost was Siltech’s SAGA amplifier (approx. $100k, 2Q). Thinking outside the box, the company split its amp into three stages and corresponding chassis, thus allowing optimization of each portion. For instance, the linestage and voltage gain stage are tubed, yet the current gain stage is solid state. Also, each stage’s gain is kept in its optimal range, and the physical separation of functions allows isolation of EM interference. SAGA supports both pentode and triode modes, and the obviously better-sounding triode mode still delivers 380 Class A watts/channel, bandwidth greater than 3.5MHz, and a dynamic range >130db—higher than most source material.

Many a listener of mbl’s Corona line has been surprised to learn that its stereo amp is partially a switching design. Now the company has added new top-of-the-line monoblocks to the lineup. Called the C15 ($25k/pr), the amp combines a standard, non-switching power supply with a switching amplifying module. Mbl says the design avoids the traditional detriments of Class D designs and sounds every bit as good as an equivalent Class A/B unit.

While there was a distinct shortage of separate phonostages—the only one I saw was the full production version of Constellation’s Perseus (approx. $29k, 2Q) that JV reviewed in prototype form—CES showcased an abundance of new or improved pre-amps. The Soulution 520 ($26,500), for instance, is the company’s new entry level preamp. It includes a built in phonostage, and offers the wide bandwidth for which the company is famous. Esoteric introduced the C-02 ($23,500, March), a split chassis unit whose knobs glow blue when you touch them. 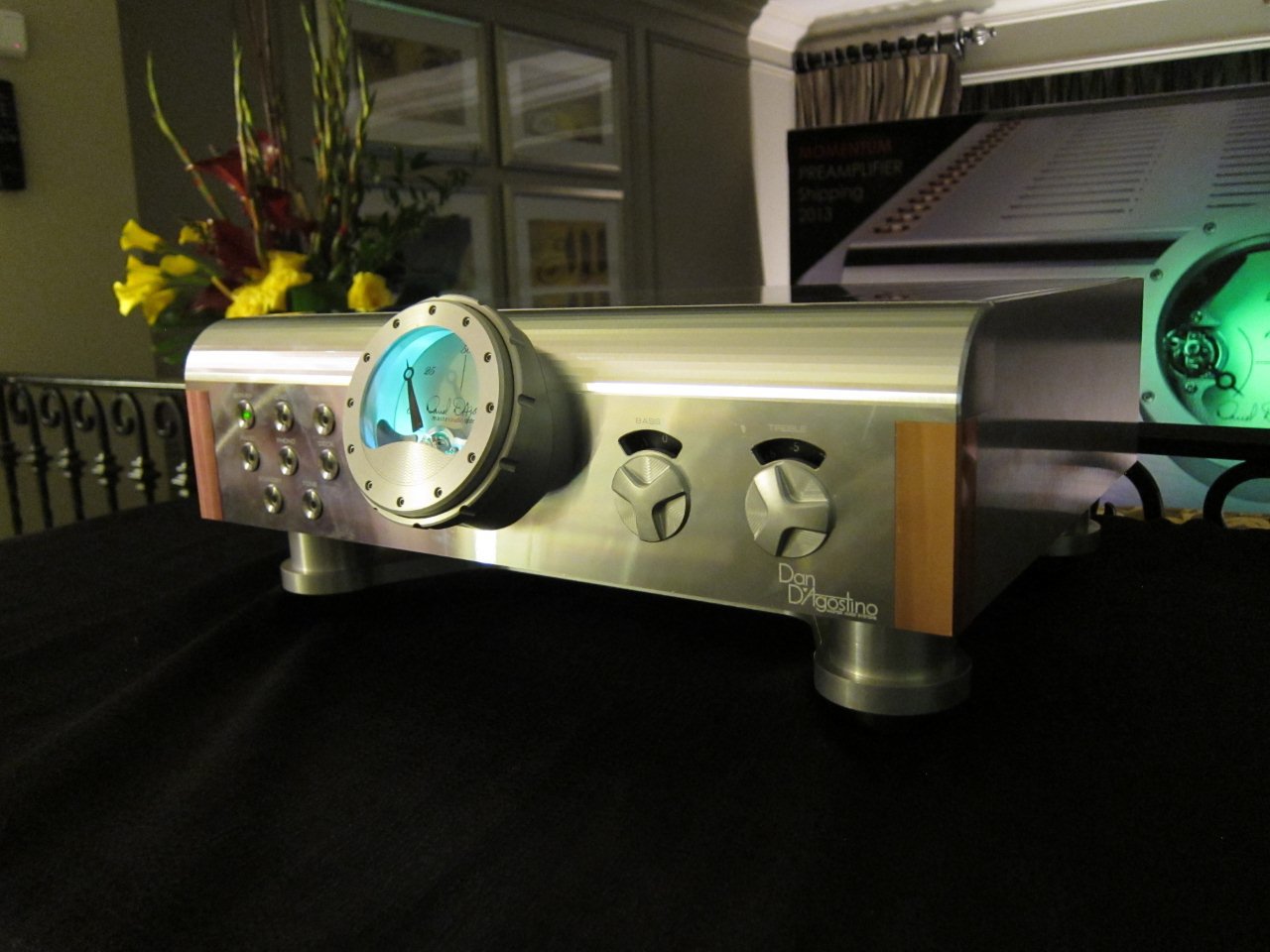 Speaking of ergonomics, Dan D’Agostino proffered a preamp, the Momentum ($32k), whose obsessive attention to detail pays off in the user experience. For example, the volume control’s aircraft-grade relays are absolutely silent. Buttons don’t wiggle, and they are lit by color-coded LEDs. There are even bass and treble controls! (Don’t fret, purists; they can be bypassed.)

Mark Levinson announced the No. 52 ($30k, March), its new reference. An update to the popular No. 32, the new model has been five years in the making. Pass Labs also took a while gestating its new flagship preamp, the Xs ($35-40k, June). Built to pair with the recent Xs power amps, Xs is a dual mono, dual chassis design with ceramic gain boards. Word is that Nelson Pass waited until he was confident it outperformed the $16,500 XP30.

Constellation had still more news in the form of the Virgo II ($24k, March). The preamp now uses the same full-width, triple power supply (left, right, and digital control) as other Performance Series components. Owners of the original Virgo can upgrade to II. Also upgraded is the Reference Series’ Altair preamp, which gains a display, a snazzy new leather-clad aluminum remote, and several performance tweaks. Its price will rise from $60k to approximately $65k (March).

Vitus calls its new component the “Reference DAC” ($13k), but it’s actually a fully balanced, true analog preamp with a built-in DAC. When a user selects an analog input, the digital section shuts down completely. In the same betwixt and between category sits Audionet’s DNP, or Digital Network Preamplifier ($15,990). Yes, it is a pure analog stereo preamp, but the signal is also routed to a DSP (via an ADC for analog sources) that permits bass management and driving up to two powered subwoofers.

Though I can’t with any confidence tell you how this gear sounds, I can report that these components brim with quality parts, sexy aesthetics, thoughtful design, and immaculate execution. I guess that’s what you can expect when you spend more than five hundred (or even $12,000) bucks.

Most Significant Product Introduction: The GoldenEar Triton 7 passive tower. Somehow these affordable loudspeakers whisk away both grain and artifice. Though not extended in the highs, within their range they deliver eminent resolve, musicality, even bass! All for $1400/pair.

Most Important Trend: More affordable loudspeakers! This was a show where many big names in speakers—Magico, TAD, Sony, KEF—introduced entry level rather than new flagship models. All succeeded, thanks to extensive trickle-down technology and componentry.