I was saddened to learn prior to the CES that David Manley, the progenitor of both VTL and Manley Labs, had passed away in late December after a long illness. A memorial gathering of friends and family was held in the VTL room and my spirits were lifted by the shared memories of one of the greatest tube designers of my generation. Manley was unique in that he successfully combined careers in tube design as well as music recording and mastering. His all-tube analog recording chain and live to two- track recordings under the Vital Sound label are an enduring testament to his artistic passion.

VTL’s Luke Manley reminded me that  circa 1993 VTL switched over power amp design from ultralinear to a tetrode/triode connected output stage. The MB-450 Series III monoblocks ($18,000) and S-200 stereo Signature series amp ($10,000)  embody that original conception. Both of these amps did a superb job of driving Rockport Technologies’ new Atria speakers. Switching between Tetrode and Triode modes, I found Tetrode mode to offer a bit more boogie factor, though the relaxed presentation in Triode mode would most likely work well with classical music. New is the TP2.5 Series II phono preamp ($2,500) which offers both MM and MC inputs. There are five user-selectable MC resistive loadings, and MC gain settings of 56 and 62dB. The MM gain stage is pure tube while the MC circuit includes a low-noise JFET gain stage. 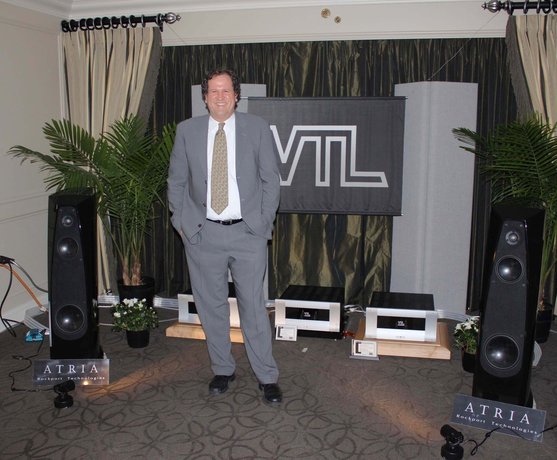 An informal poll of tube amp manufacturers indicated that Russian beam power tubes were preferred on the basis of reliability and sound quality. In particular, New Sensor’s Gold Lion reissue KT88 was regarded as the primo KT88 type, though I have had excellent experience as well with the Electro-Harmonix brand. Air Tight’s Mr. Muira still prefers the Svetlana 6550 and New Sensor’s Tung-Sol KT120 has gained a few converts. I heard talk of an even more massive KT150 being in the works, and it seems that the power game is alive and well in tube audio. Conspicuously absent were designs based on the diminutive EL84 pentode, a tube that is capable of singing most sweetly, and which Bob Carver and I happen to like.

The KT120 is featured in Zanden Audio’s model 8120 Class AB stereo power amplifier; 100 wpc from a pair of KT120s presents no problem at all. It did an exceptional job driving the TAD Ref1 loudspeakers.

While some folks complain that the KT120 is a bit grainier sounding when substituted for the KT88, Convergent Audio Technologies Ken Stevens shorts circuits the entire argument by operating the KT120 as a triode while taking advantage of its generous plate dissipation spec. A prototype JL5 ($12,000), built on a JL2 chassis was making music. The output stage uses a quartet of KT120s per side and the input/driver stage is 6922 based.

Octave Audio’s Andreas Hofmann is also a fan of the KT120. The Octave V 110 integrated amplifier ($8,500) is a fixed-bias, push-pull, pentode design rated at 110 wpc into a 4-Ohm load. Expect excellent build quality and stable operation. Bias adjustment is via trim pots and LED indicators on the front panel. 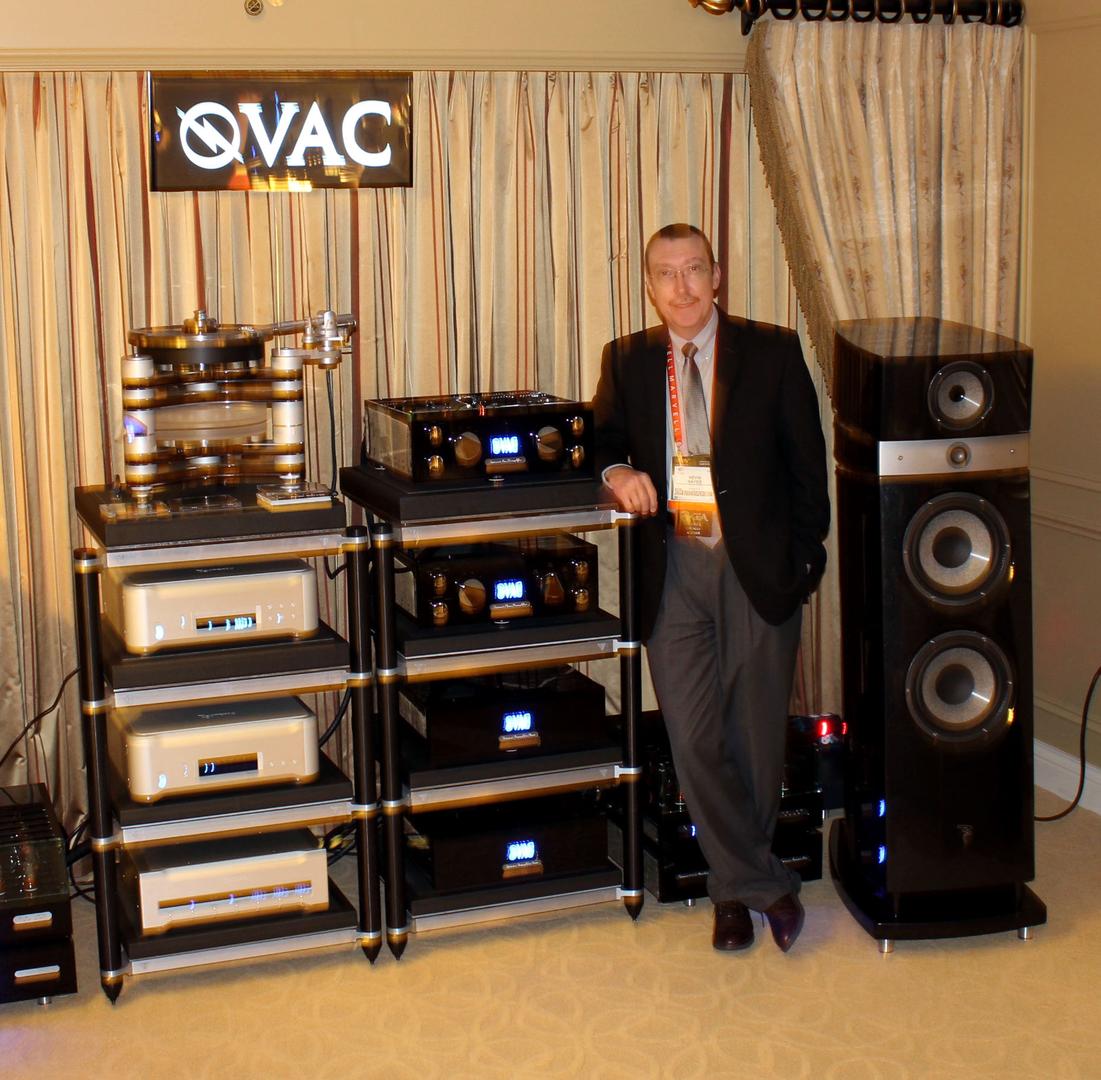 Valve Amplification Company’s iQ automatic bias system, as exemplified by the Statement 450 iQ monoblock power amplifier ($58,000 each) is said to be the result of 18 years of research and development by the engineers at VAC. It appears to be far more sophisticated than a simple DC restoration circuit or previous attempts at auto bias. The aim is to maintain each power tube’s DC bias current precisely fixed regardless of how loudly or softly the music is playing, that is under all dynamic conditions, which as VAC points out would include AC line variations, tube aging and drift, and high-voltage supply variations. As far as I can tell, this is a far reaching solution that has not been matched by prior auto bias designs. It’s quite possible that this patent-pending technology may well be the final word on the subject. However, the cost of the VAC  iQ circuitry is significant – on the order of $10,000 at the retail level, but as Kevin Hayes points out, VAC’s focus is not on expediency or efficiency but rather on the best possible sonic performance. 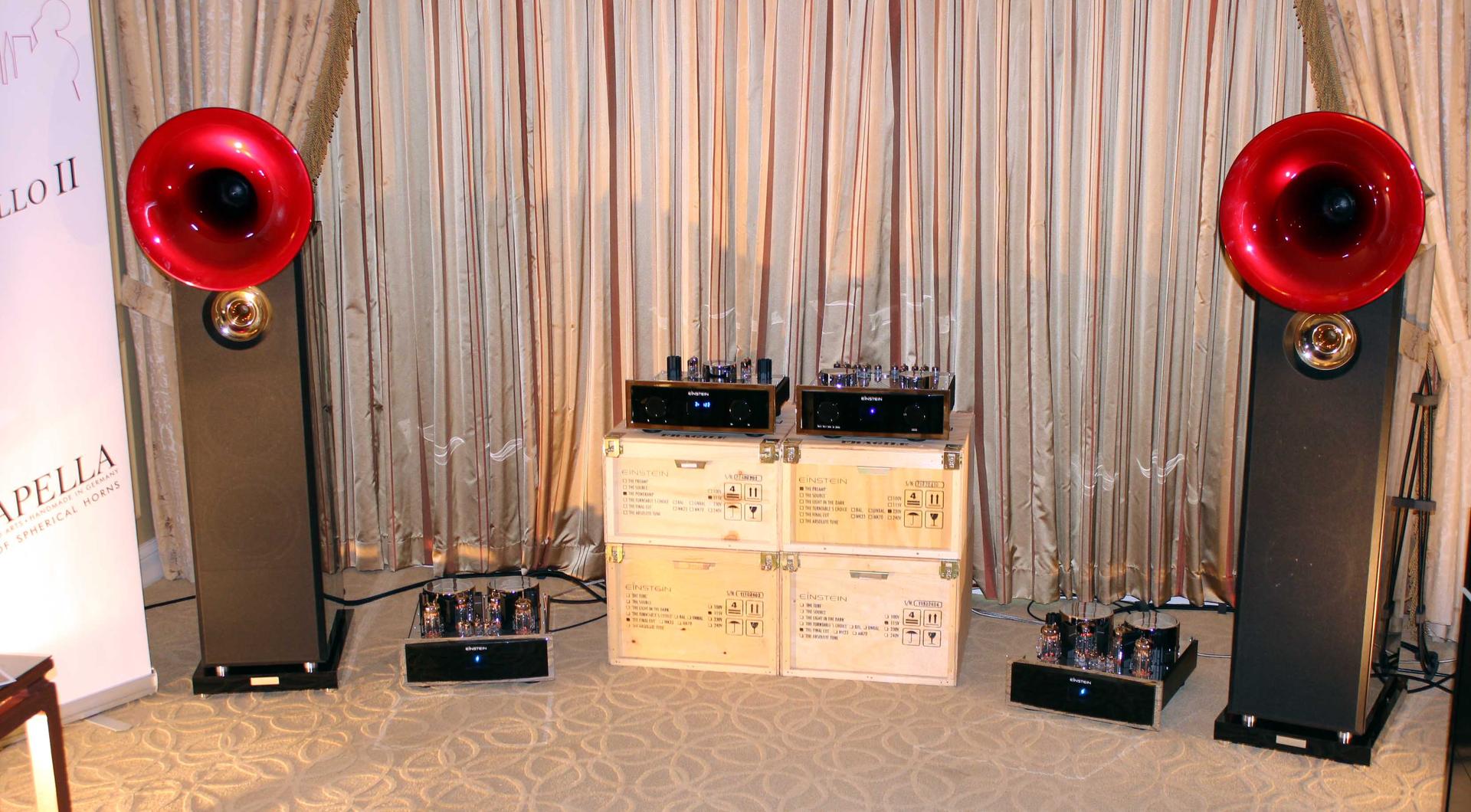 Einstein Audio’s Silver Bullet monoblock ($42,000/pair) was the only OTL that crossed my path during the Show. Not surprisingly, it is based on the Russian 6C33B power triode – the ideal power tube for OTL applications. Each monoblock uses a quartet of these tubes and is able to deliver 60 wpc into an 8-Ohm load. While there is a large stock pile of these tubes available, Einstein Audio’s Volker Bohlmeier related that only about 15% of the tube lots they purchase meet their strict quality requirements. Coupled with the Acapella Violoncello II  loudspeakers, the resultant sound was one of the best at the Show. 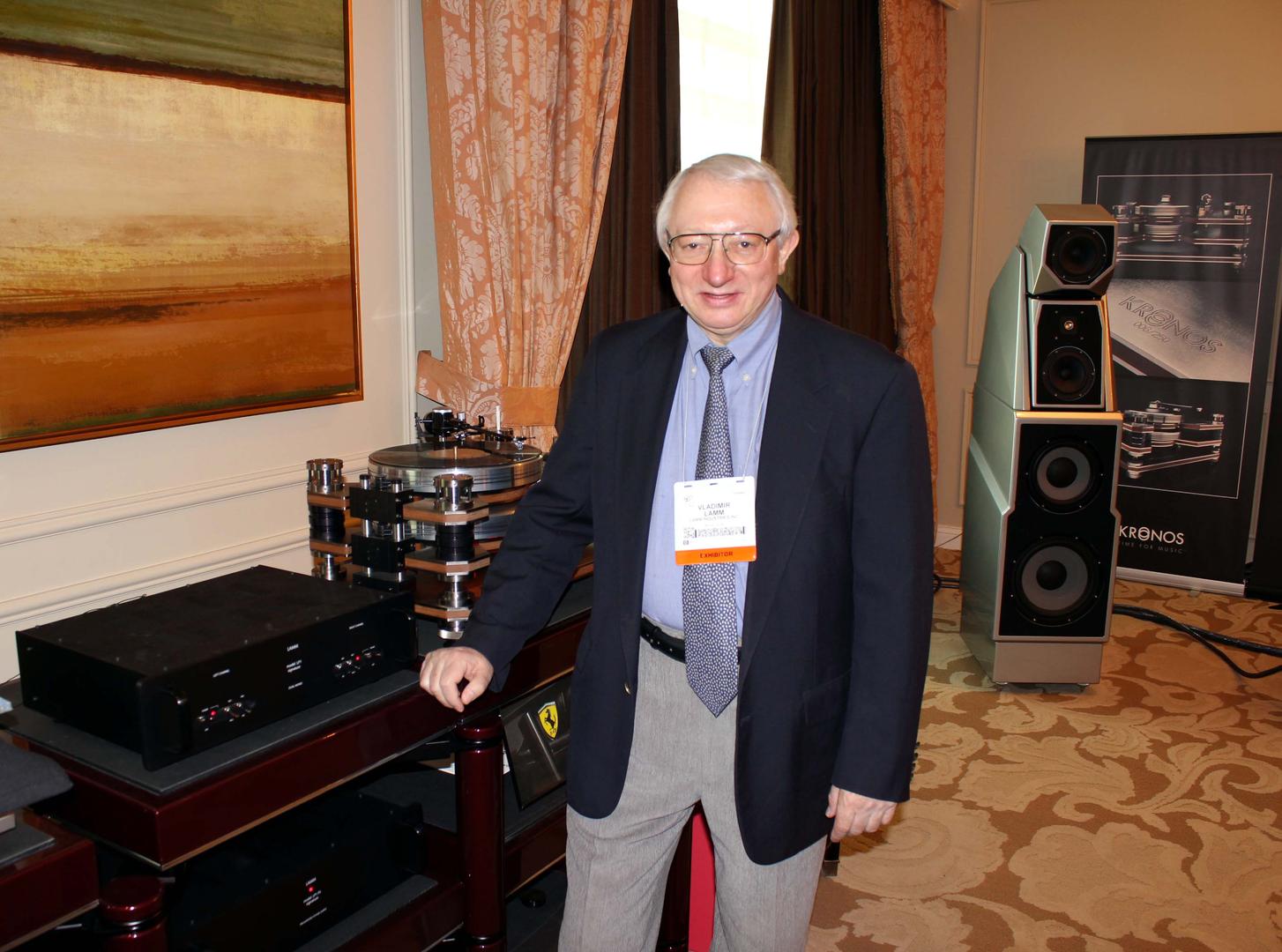 Lamm Audio celebrated its 20th anniversary with the world premier of the LP1 Signature phono preamplifier ($32,790). It’s a monumental three chassis affair with two external power supplies – one per channel. Most of the complexity is in the power supplies which feature toroidal power transformers, tube rectification, and extensive voltage regulation. There are a total of three inputs, one MM and two MC with adjustable cartridge loadings. Designer Vladimir Lamm explained that in order to keep the signal path as simple as possible he opted for passive RIAA equalization to maintain the number of active gains stages at two. Both stages are single-ended Class A using Russian 6C3P (first stage) and 6C45P-E (second stage) triodes. No global feedback is used. The LP1 is engineered with excellent headroom reserve and current drive capability to accommodate long cable runs. Naturally, it’s a labor of love – only the best, and consequently very expensive components are deployed. Vladimir is particularly proud of this design and believes that it will hold up as a reference for the next 100 years!

My visit to the Cary Audio room was enjoyable for two distinct reasons. First, I was greeted by a pair of Tannoy Kingdom Royal loudspeakers driven by Cary CAD-211FE monoblocks. The front end consisted of a Cary SLP-05 preamp and a CD-303T CD/SACD player. Speak about stress relief! This must be the perfect system to kick back and enjoy the music after a long day. I was also most pleased to discover that Carey is re-launching its Audio Electronics brand which was originally started in 1993 as a parts supplier, later expanded to add kits and assembled products, and finally discontinued in 2006. The AE line is about cost effective products, and in particular, the two that that caught my attention were the Constellation line preamp ($1,495) and the Hercules stereo amplifier ($1,895). The Constellation  The Constellation uses a pair 6SN7 for 20dB of gain. The power supply features discreet voltage regulation and a custom C-core power transformer. There is an option for higher grade coupling caps and high-speed rectifier diodes. The Hercules is a 30 wpc ultralinear design using a pair of EL34 pentodes in push pull. It is cathode biased for fuss-free operation.

And while on the subject of budget conscious gear, I must mention Rogue Audio’s new integrated hybrid amplifier featuring a triode front end and Hypex Class D MOSFET modules. The Sphinx incorporates a MM phono preamp and a discrete headphone amp – all that for the sensational price of $1,295. An optional remote volume control is $100 extra. 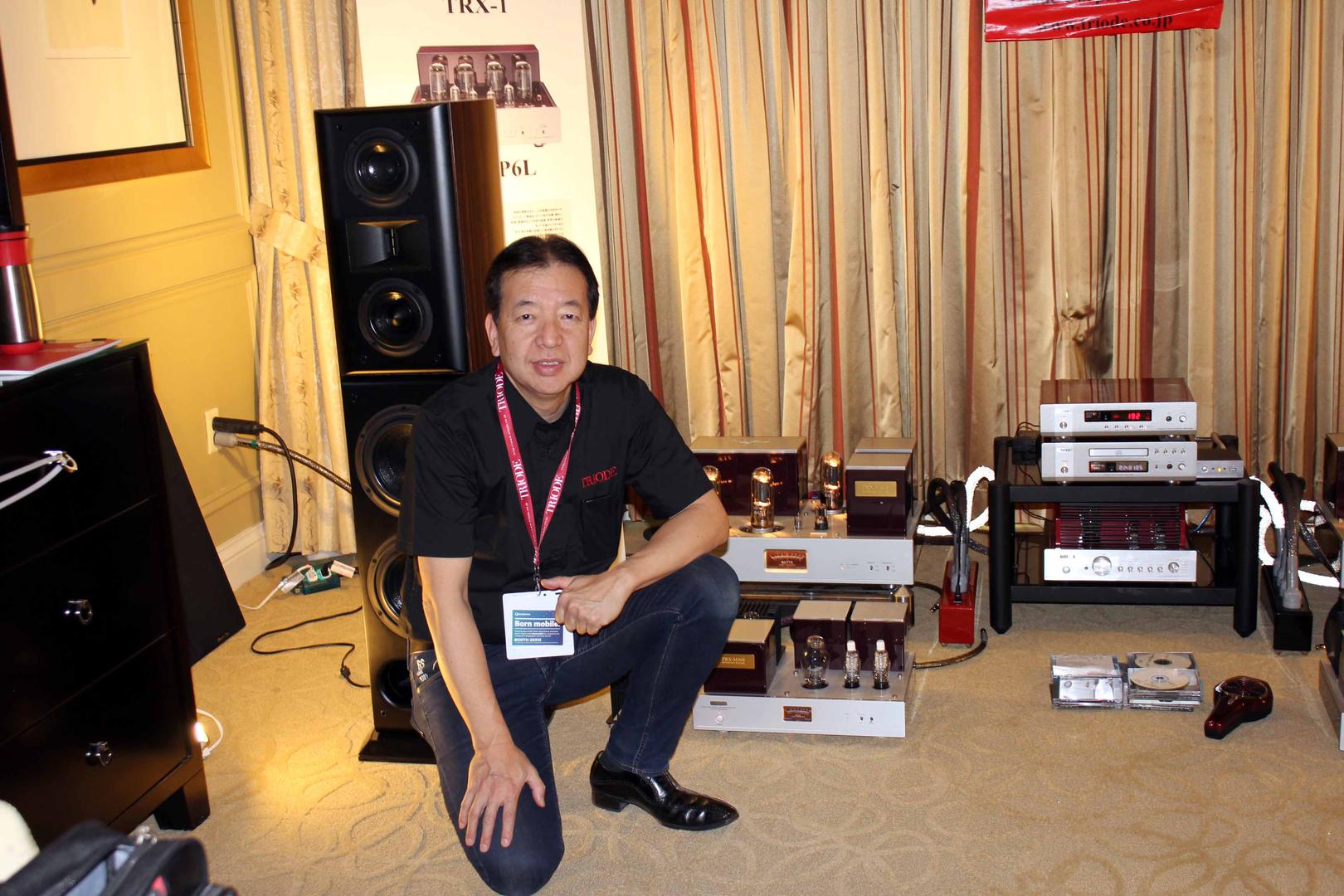 There were only a few sightings of SET amplifiers to report on. At THE Show I got my first glimpse of the Absolare Passion 845 Parallel SET ($37,500 per pair) that RH likes so much. All I can say is: very nice on all counts! In addition to the Triode M845SE monoblocks, the Acoustic Zen/Triode Corporation room showcased the exciting new TRX-M300 Reference monoblock SET amplifier ($14,000). Shades of the Western Electric 91A: a single 300B power triode driven by a pair of WE 91A pentodes and tube rectification via a WE 274B. Power output is 8 watts into 8 Ohm. Features include auto bias and front panel bias current metering. Needless to say, I’m eager to get my hands on these beauties.