Usually I begin my report with pithy remarks about the show, but this year so many new digital products deserve inclusion in my report that I’ll cut right to the chase.

The 2013 CES proved that rumors of the CD player’s demise were premature. Many manufacturers unveiled new CD spinners. The differences between these new units and CD players of yore revolve around both performance and ergonomics. The least expensive player I saw was from Cambridge Audio. Its Azur 752BD Upsampling Universal Player ($1299) can play Blu-Rays, SACDs, DVDs, and CDs, as well as accept USB sources. With five Wolfson Audio DACs, signals are upsampled to 24-bit/192kHz with multiple user-selectable digital-filter options. 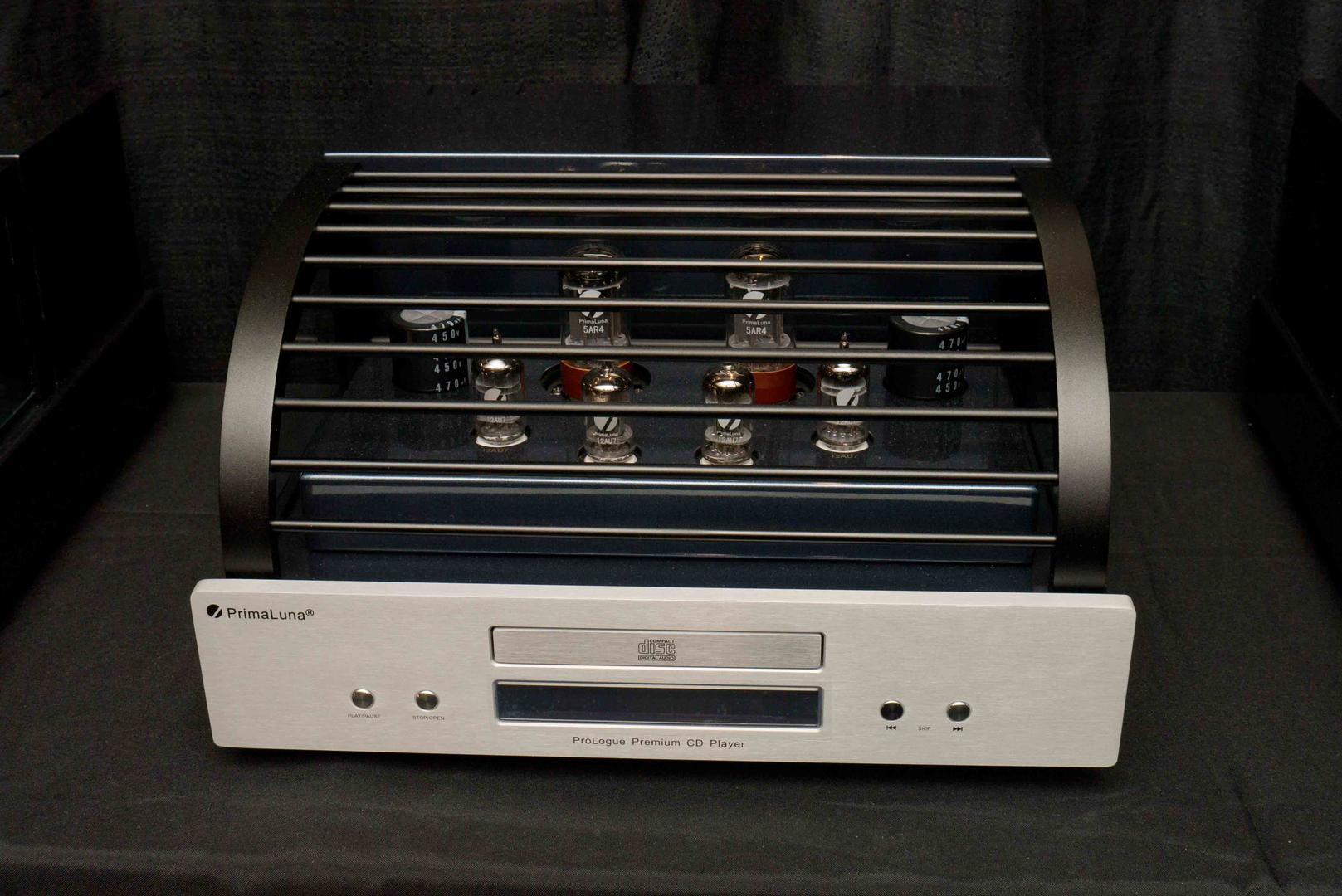 Prima Luna demonstrated a new twist in digital clocking in its latest Prologue Premium CD player ($3999). It features two “Super TubeClocks” that use an ultra-low-jitter clocking device which replaces the solid-state oscillator with a vacuum tube. It also uses a dual-mono analog output design with two 12AU7 dual-triodes and a 5AR4 rectifier.

Also priced at $3999, Electrocompaniet’s EMP3 premiered a multi-format player based on the latest generation of Oppo players. It retains Oppo’s excellent video and high-resolution audio capabilities, but adds Electrocompaniet’s analog circuits to the basic Oppo unit. 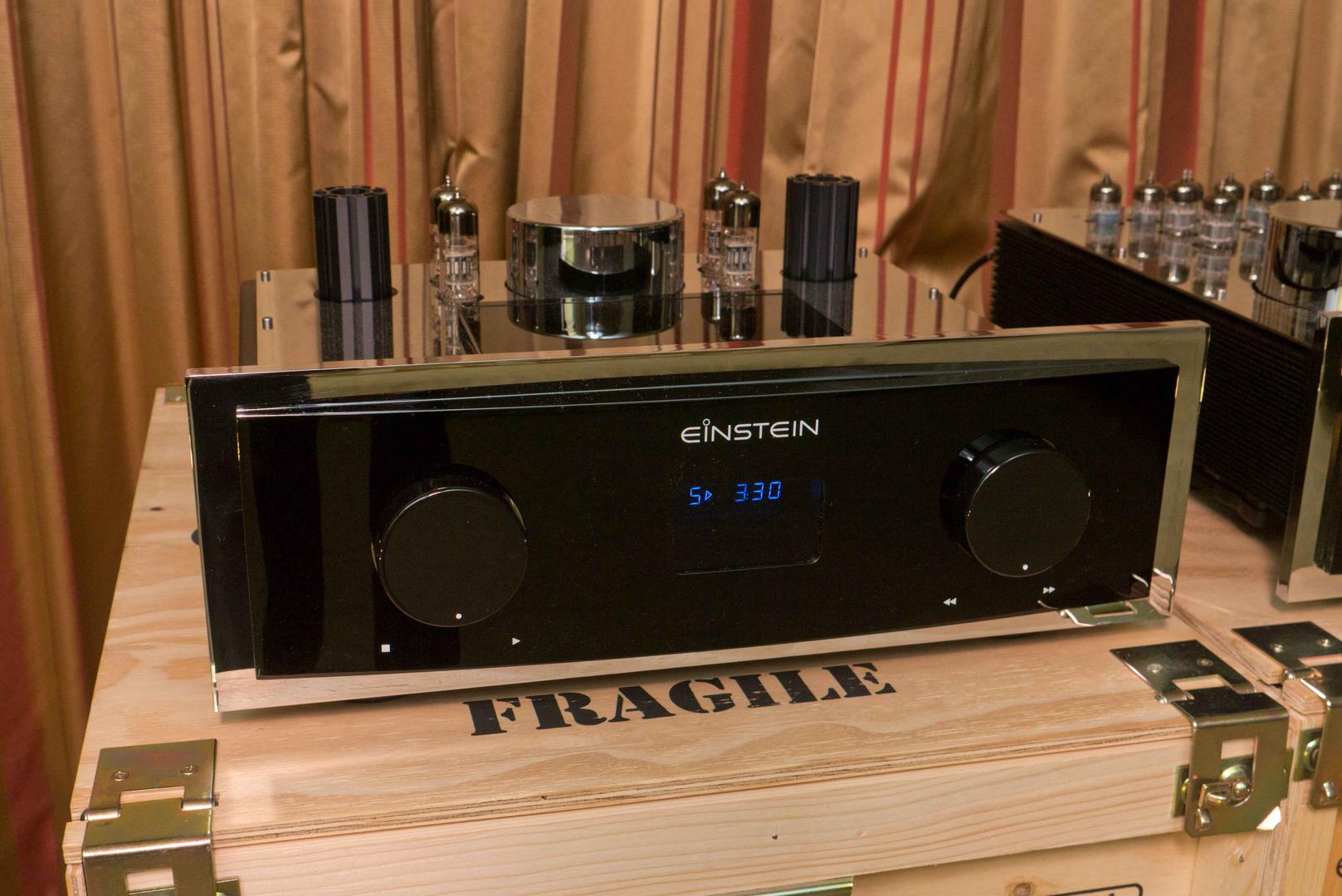 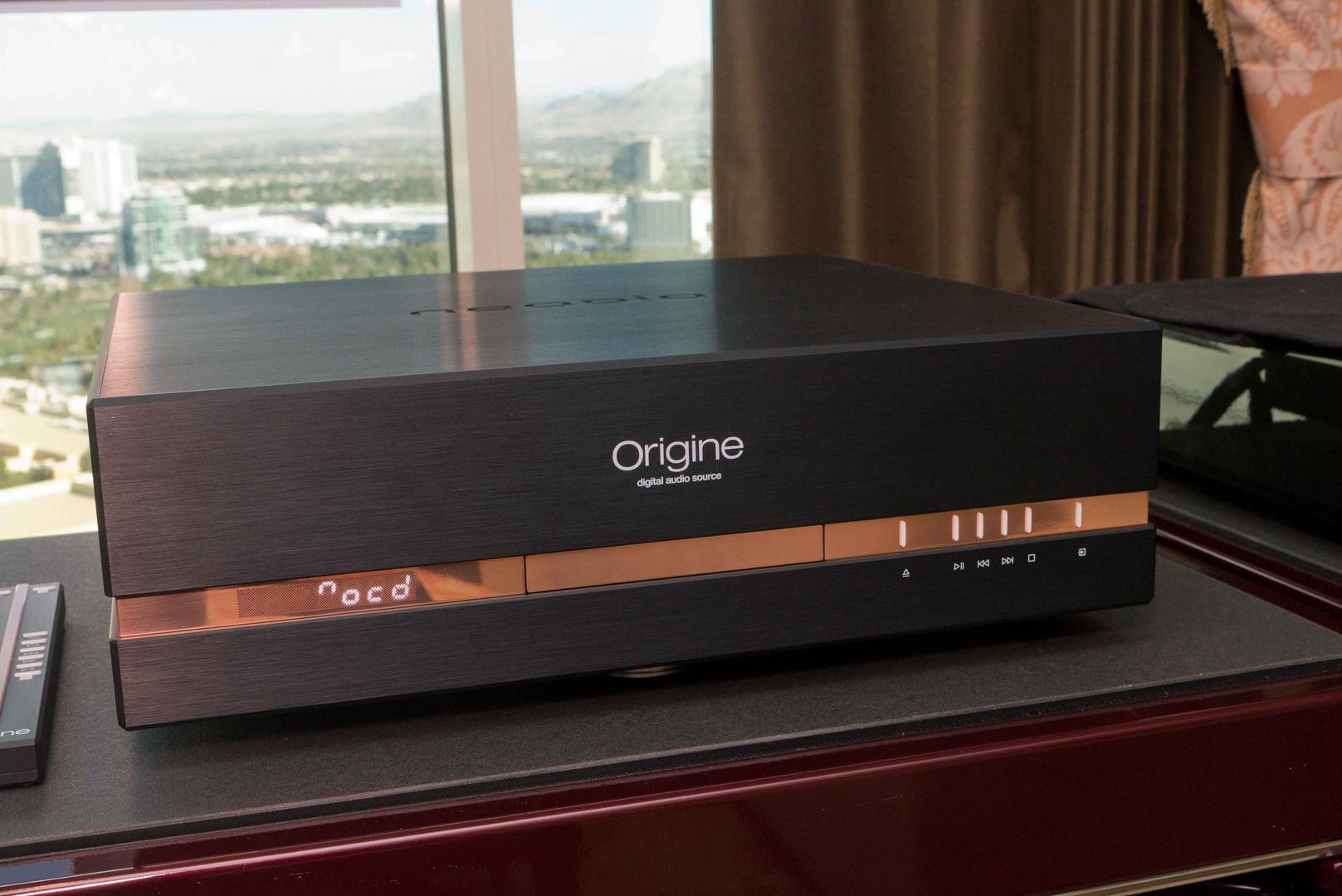 The priciest CD player I saw during my rounds at the Venetian was Neodio’s Origine player ($38,000) in the Lamm room on the 35th floor. With an ultra-dense constrained-layer chassis made of five different materials; Neodeo claims zero resonance and zero vibration for Origine’s reading mechanism. With three transformers, a custom AC mains filter, as well as custom filters for the DAC section’s power supplies, the Origine boasts that its output can rival any analog source currently available. 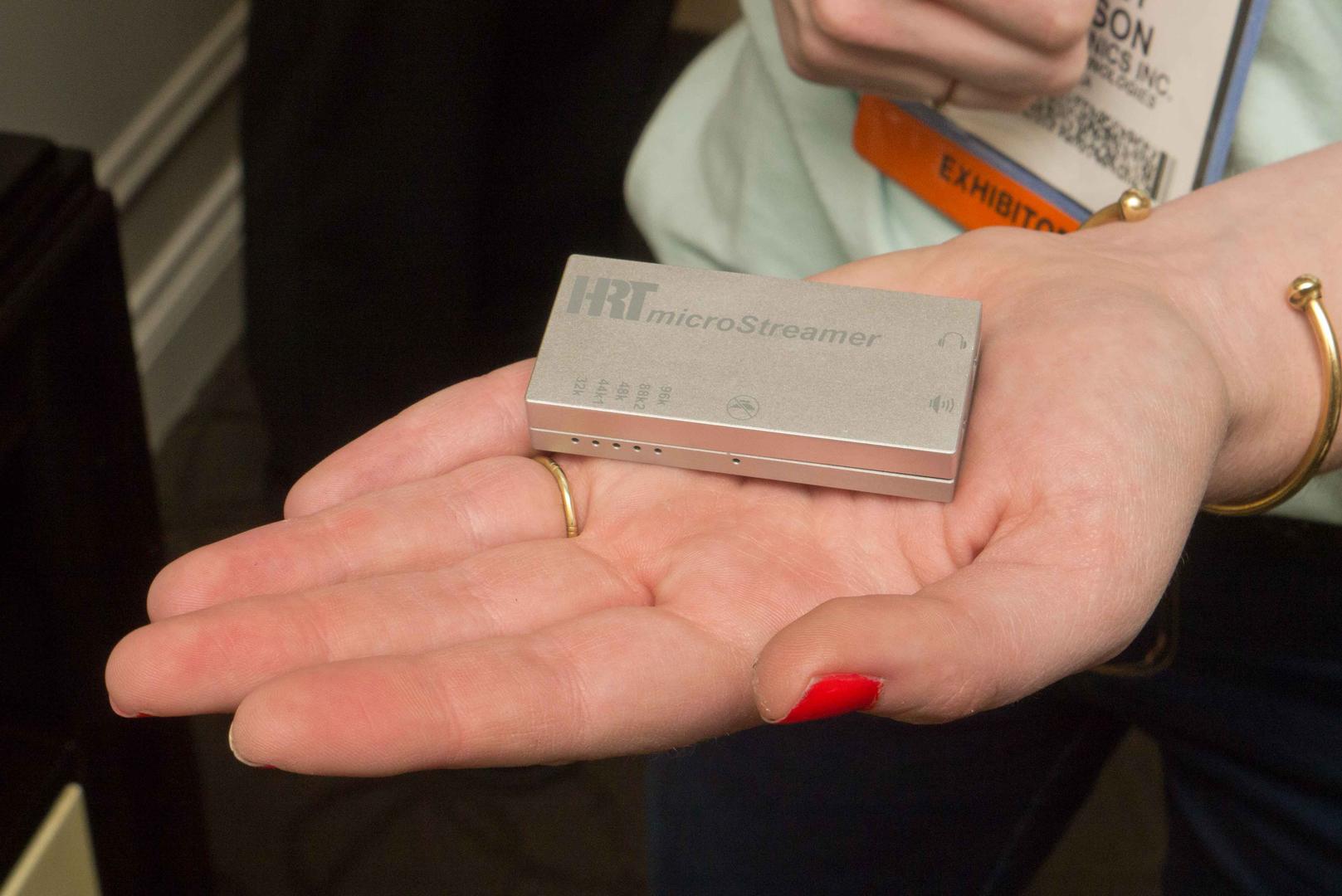 High Resolution Technologies, or HRT, is well known for its high-performance yet budget-priced DACs. At this year’s CES HRT rolled out two new DACs. The HRT microStreamer ($189) supports sample-rates up to 96/24 with an A-weighted S/N of 105dB. It has dual outputs that support both a line level of 2.25 volts as well as headphone output of 130mW. The new HRT MusicStreamer HD DAC ($499) can handle up to 192/24 bit files and has an amazing A-weighted S/N ratio of 119dB. Unlike previous HRT models the HD supports full-sized balanced XLR connections. 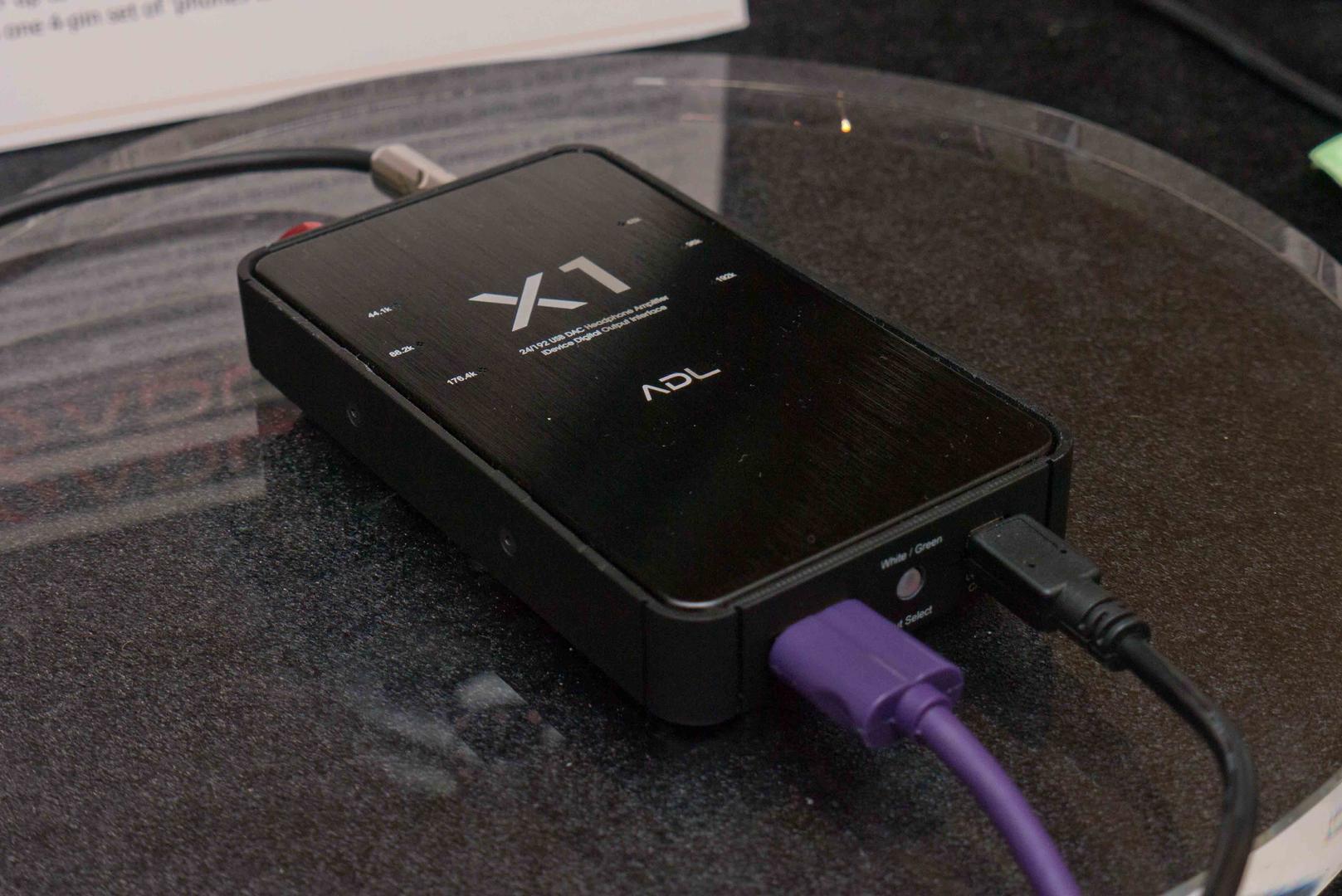 Alpha Design Labs added another budget-priced DAC to its line. The ADL X1 ($549) supports up to 192/24 files via USB and 48/16 via 30-pin connectors. The X1 includes a rotary variable-resistor volume control for both its line level and headphone outputs and has a maximum output for headphones of 110mW into 32 ohms. 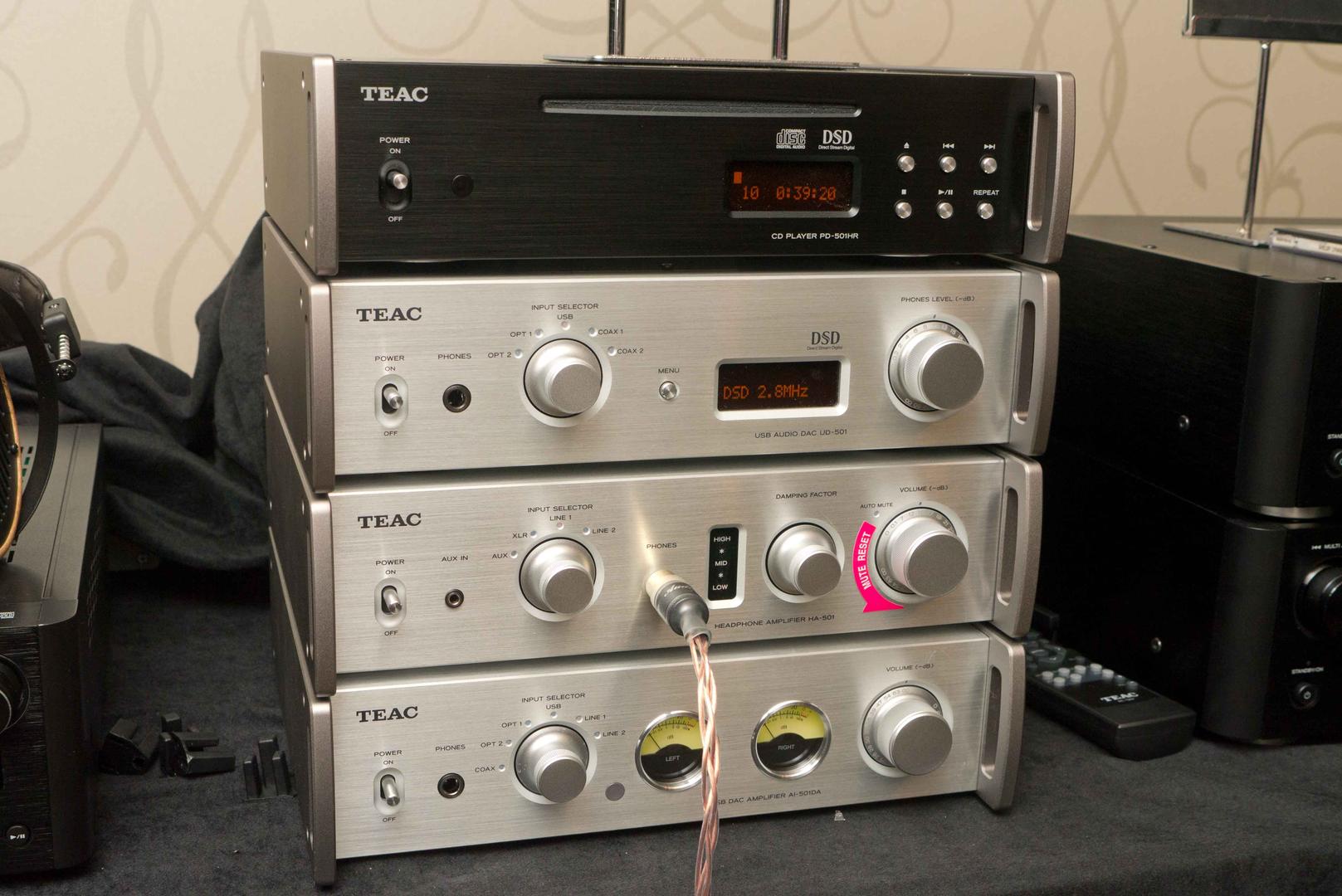 Teac scored a first by releasing the least expensive, yet fully featured DAC that supports DSD, the UD-501 ($799). It also supports up to 384/32 PCM as well as 128x DSD, using two 32-bit Burr Brown DACs per channel and JRC Muses op-amps for the output stage. The UD-501 is a true dual-mono design that is fully balanced throughout. 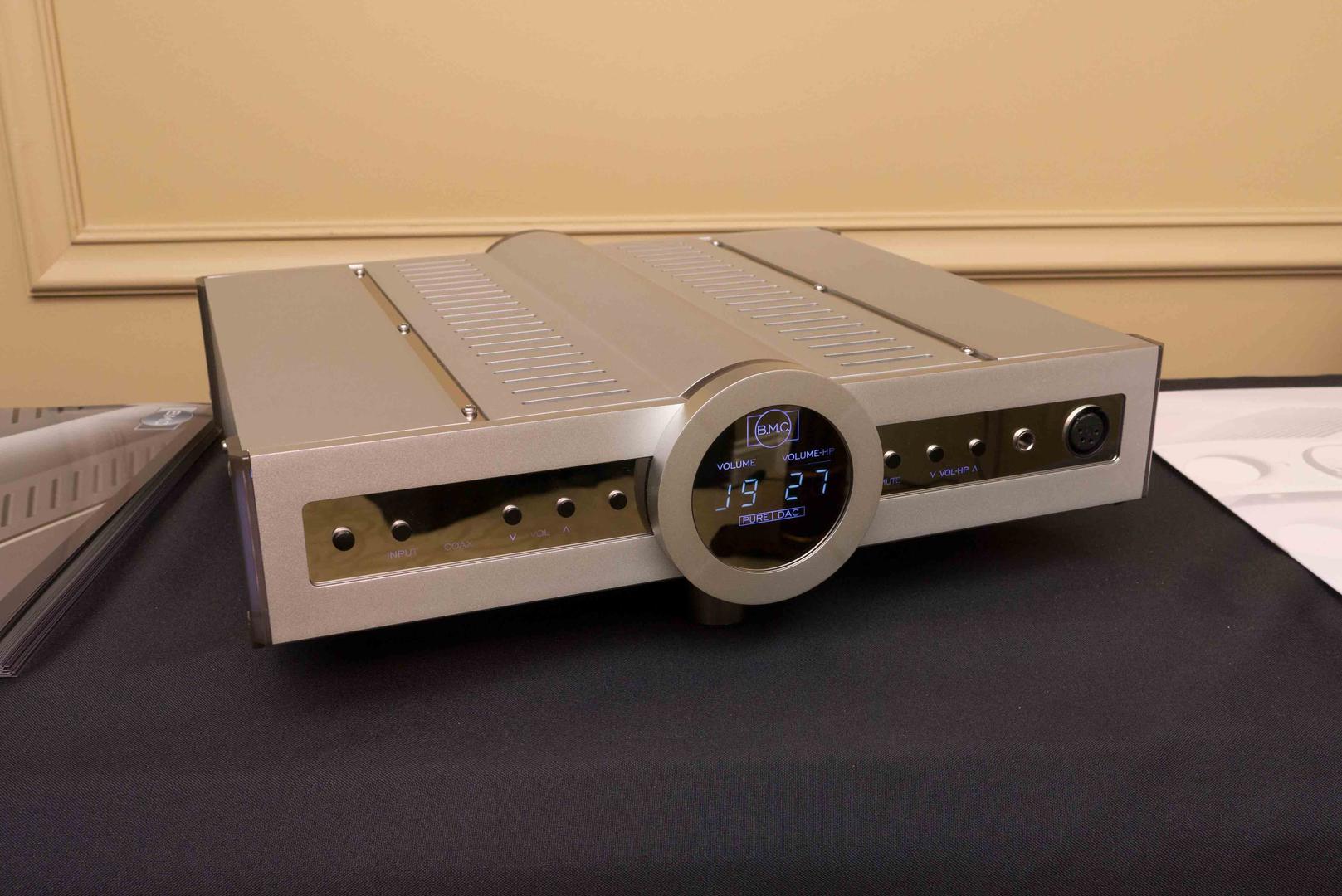 Chord’s new QuteHD DAC ($1795) includes Chord’s proprietary DAC circuitry originally developed for its $8500 QBD76 HDSD DAC. Supporting PCM files up to 192/24 and DSD via USB and 384/24 via S/PDIF, the QuteHD DAC packs quite a bit of technology into its small chassis.

Cary Audio unveiled two new DACs at CES, the DAC-100t ($2995), with a tube output stage, and the DAC-100 ($2495) with solid-state devices. Both DACs share the same front end, with Gordon Rankin’s asynchronous USB inputs that support up to 192/24, an XMOS USB processor, and a separate ESS SABRE 9023 for each channel.

As part of the $414,055 system in the Lamm room in 35-309 Tech Das unveiled its D-7i DAC ($7600). Using a Wolfson DAC with support for PCM files up to 192/24, the D-7i also supports DSD files over PCM (DoP). With two high-capacity power transformers, and a user selectable sampling rate convertor that upsamples by either 1, 2, or 4x, the Tech Das D-7i even includes a headphone amplifier on the front panel.

Hegel’s new 32-bit “control Center DAC,” the HD25 ($2500), uses silicon germanium transistors for a lower noise floor and a 32-bit DAC chip to achieve maximum transparency with low jitter while supporting files up to 192/24. With Hegel’s proprietary re-clocking circuitry and four inputs, including a USB 2.0 connection, the HD25 is definitely a high-value product. 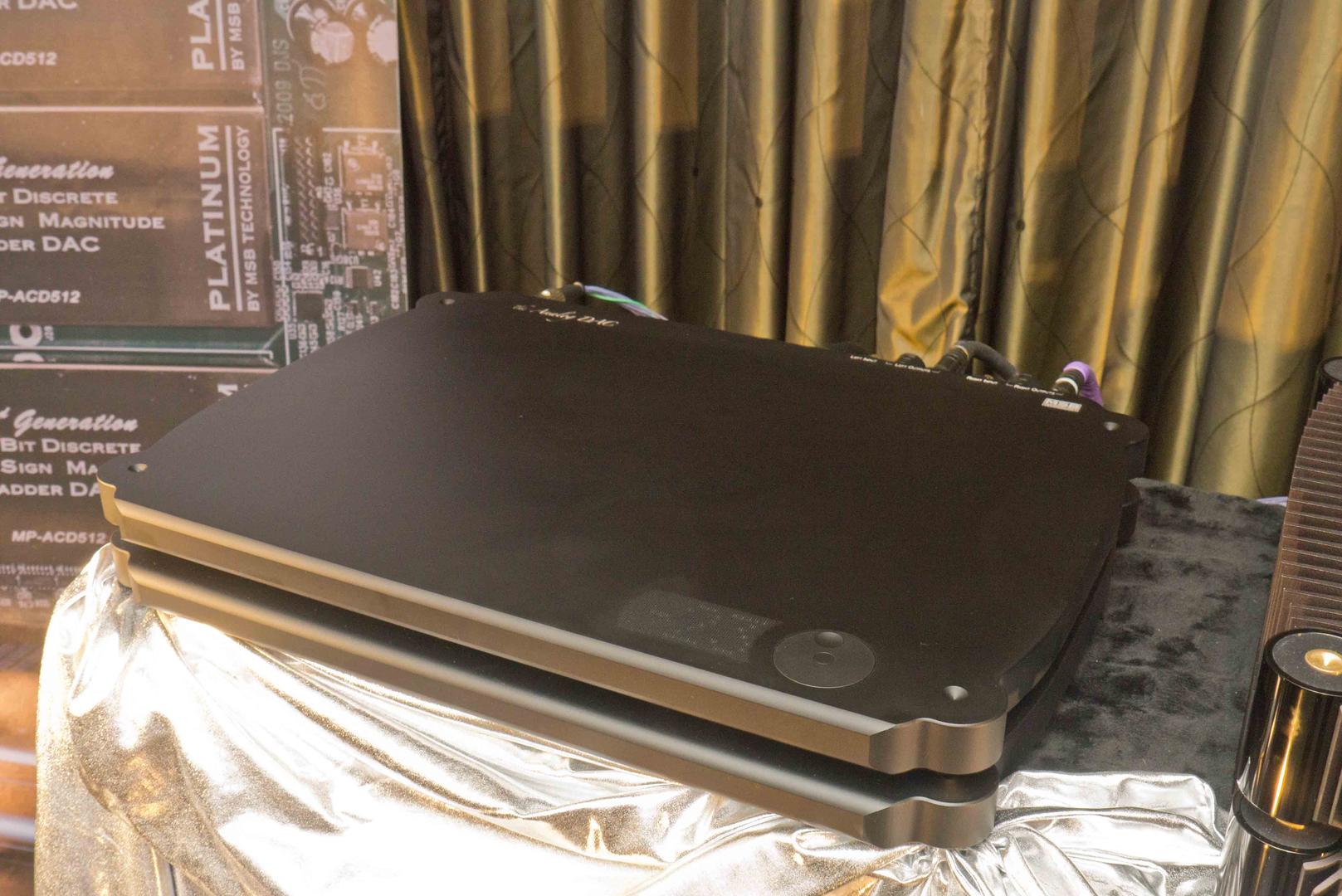 One of the more exciting examples of trickle-down technology at the 2013 CES was MSB’s new The Analog DAC ($7000). It sports a radical shape as well as a modular layout that lets users choose three of five available input modules. With a dynamic range of 133dB, noise floor below 145dB, and signal-to-noise ratio of 137dB, due in part to MSB’s femtosecond clock and 80-bit digital processing, the Analog Dac promises exceptional performance and a very attractive price. 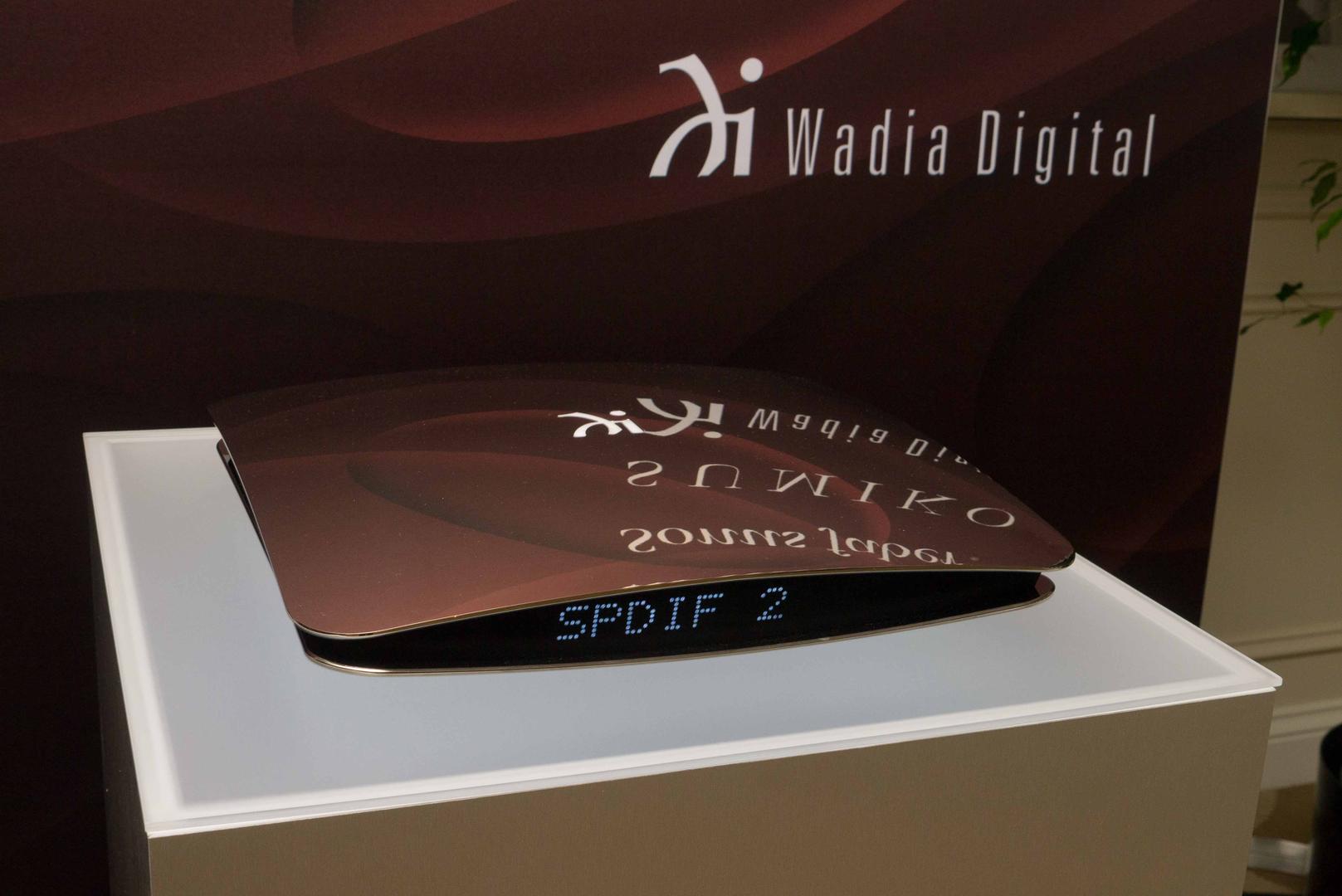 Another DAC that breaks new ground in shape and form is the Wadia Intuition 01 ($7500). This power-DAC includes upsampling to 1.536MHz via Wadia’s Delta-SigMaster 32-bit upsampling algorithm, seven digital inputs, and the ability to drive a 4-ohm speaker load with 350 watts peak power.

At the over $10,000 price-point, a trio of DACs marched to the forefront. Audio Research’s latest, the CD9 ($13,000), has quad DACs, upsampling, user-selectable digital filters, a USB 2.0 asynchronous interface, as well as AES/EBU, TosLink, and S/PDIF digital inputs, and of course a completely vacuum-tube powered analog section. 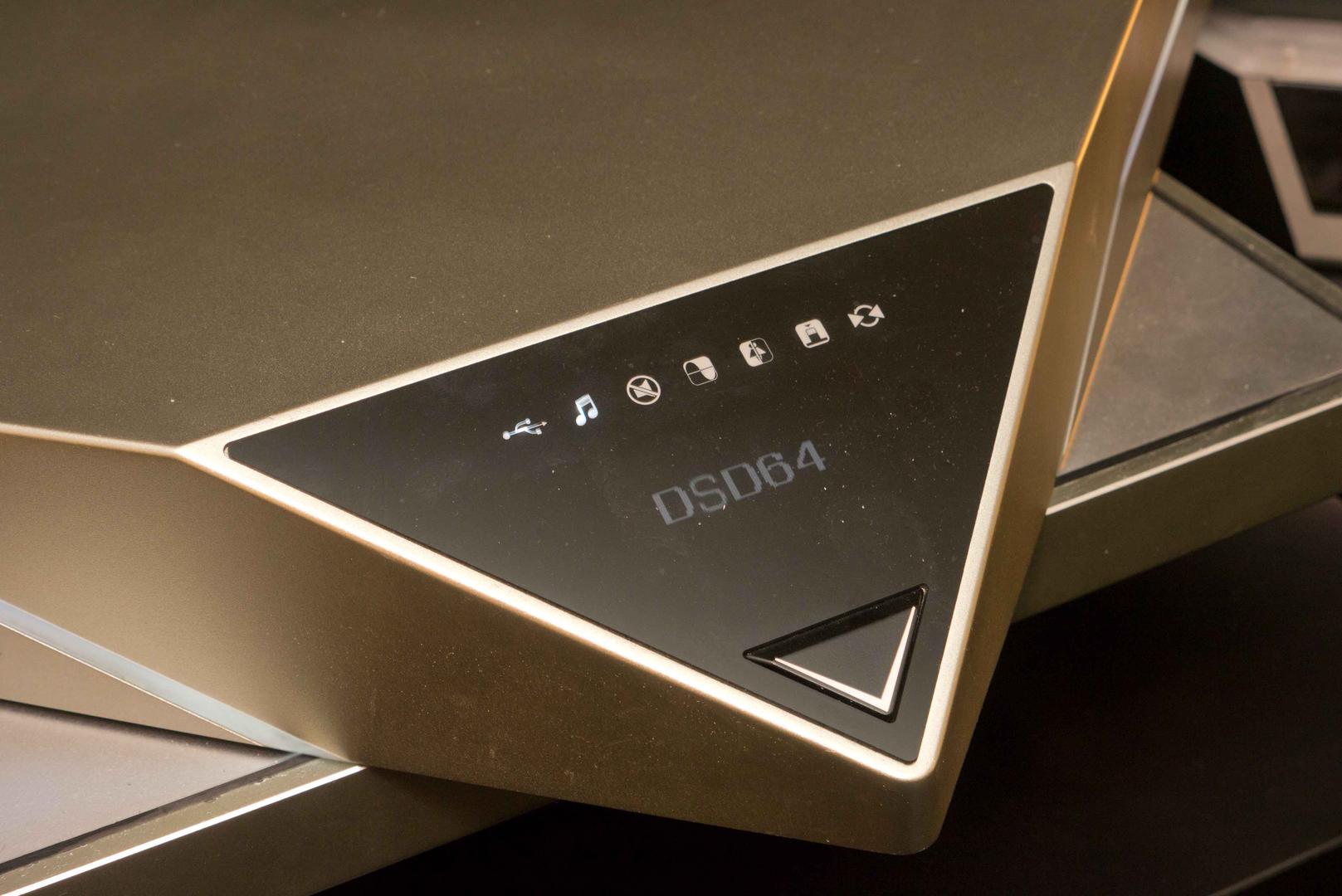 The visually striking Light Harmonic Da Vinci Dual DAC ($31,000) was a CES Innovations Award honoree, but its real beauty is inside. With two separate and discrete decoding engines, one for PCM and the other for DSD, the Dual DAC can handle everything up to 384/32 bits and 128x DSD.

Vitus Audio RD-100 DAC ($13,000) includes two analog inputs along with its digital capabilities. The RD-100 is part of Vitus’ Reference Series of components and includes a 24.576 master clock with a frequency tolerance of plus or minus 20ppm. With support for sample rates up to 192/32 and a relay-controlled resistor-network volume control, the RD-100 boasts better than 110dB signal to noise.

Krell surprised many folks, including me, with a new digital “server” type product, the Connect Music Server ($2500–$3500). It’s available either with or without an internal DAC that uses a Sabre 32-bit ESS chipset. It supports FLAC, WAV, MP3, and WMA files with resolutions up to 192/24 and gapless playback via either Ethernet or Wi-Fi streams and is even Internet radio UPnP/DLNA compliant.

Bryston added another server to its stable, the BDP-2 ($2995). It joins the BDP-1, which remains in the Bryston line-up, but the BDP-2 adds more capabilities, including six USB 2.0 inputs, and eight times more internal memory. The BDP-2 also adds NAS and eSATA drive connectivity as well as UPnP/DLNA client/server support.

Certon’s Integrita Server ($5500) includes a six-terabyte internal hard drive with a raid level six data protection scheme and supports files up to 352.8/24. It’s iTunes compliant, fanless, and can be controlled via a Web browser program. The Integrita also can stream HD video to any device on your home network. 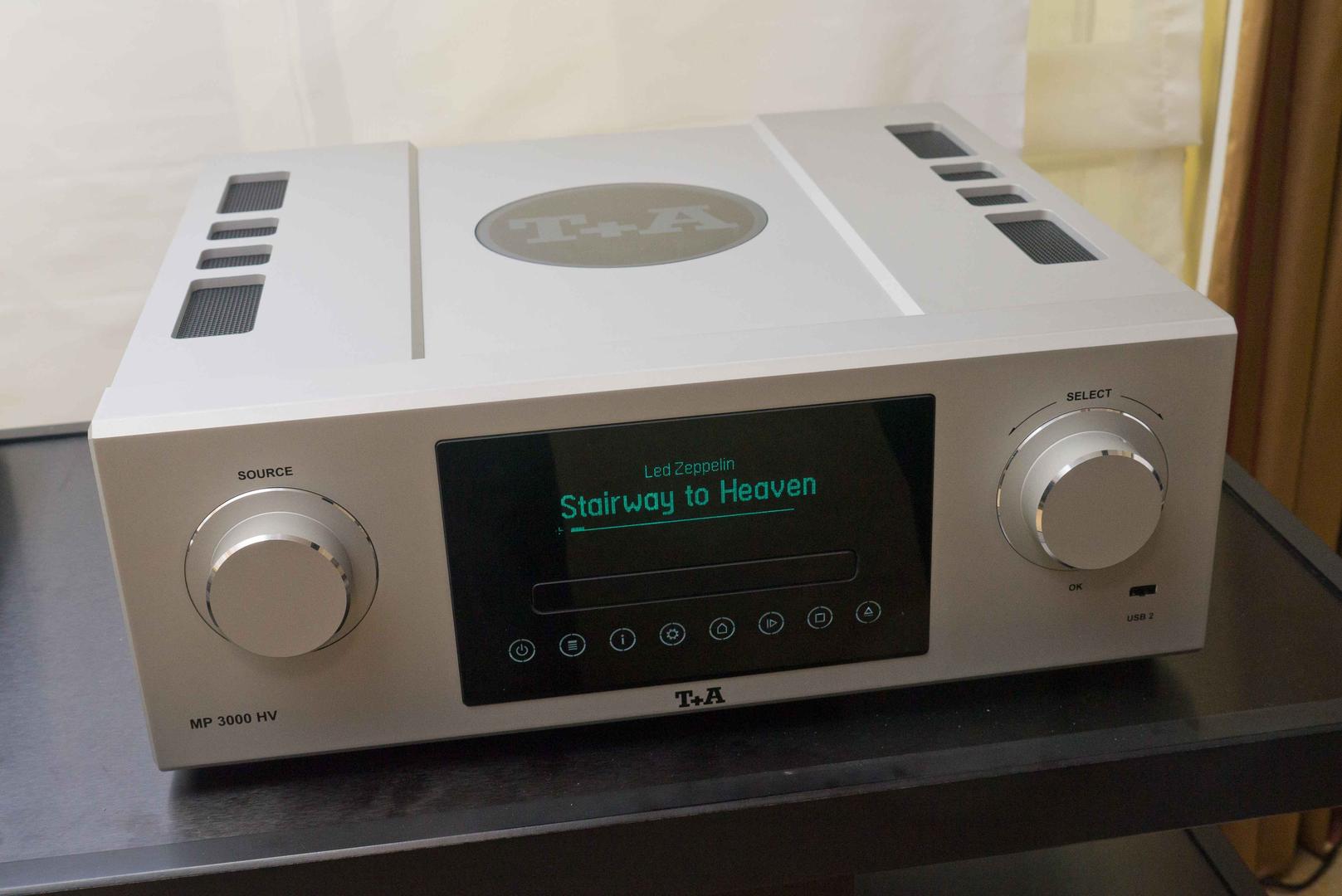 SGR Audio, from Australia, had two versions of its new Music Cube server ($4995 or $9995 with DAC). Its DAC board was a joint project with MSB, and uses a similar trickle-down Femto technology as in MSB’s new “The Analog DAC.” The Music Cube can also be used as a CD player via its internal transport, and supports up to 192/24 files. 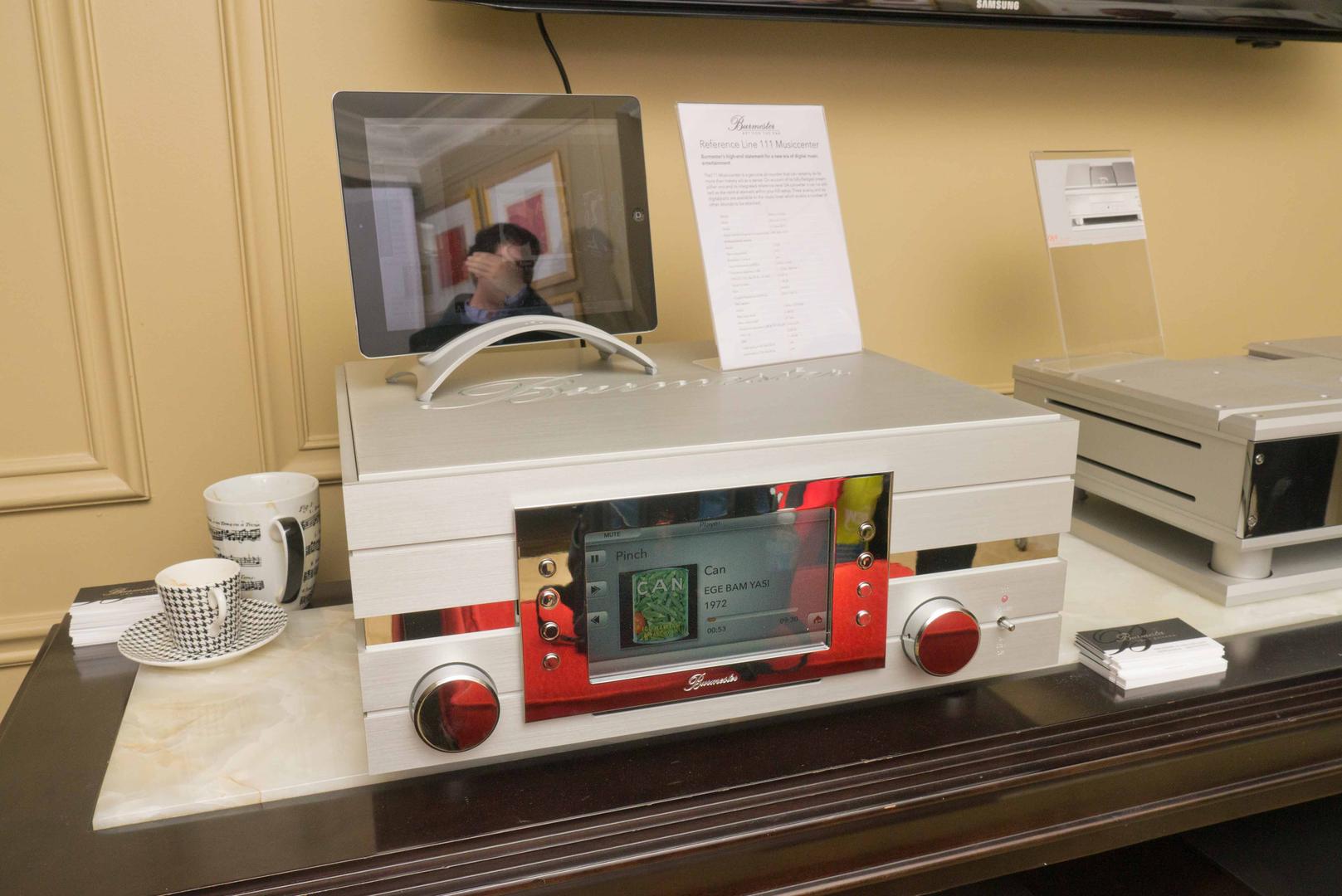 The most expensive server at the show was the Burmester 111 ($49,995). With a stunning 7-inch display “borrowed from airplane construction,” two mirrored hard drives for music files as well as an SSD drive for its operating system, a built-in UPS, UPnP compatibility, and support for 192/24 files, the Burmester 111 represents an all-out assault on server state of the art.

After midday Wednesday an incipient case of the flu made everything sounded amusical to me. Sorry, but to be fair, no best sound for me this year.

The new Golden Ear Triton Seven can certainly play loudly, judged by the sound coming from its front door. But each of the three times I tried to get in for a listen, the room was SRO. Maybe next time…

The Wadia 01 Intuition power DAC indicated a new direction for Wadia, not only with its unique shape, but also its combination of digital and analog features in one attractive package.

MSB “The Analog” DAC brings MSB’s Femto clock technology down to a far more “real-world” price. Its modular design and uncharacteristic good looks make it my choice for this year’s CES breakthrough product

Down with square. Audiophiles and manufacturers both agree that a $5000 product should offer greater performance and features than a $500 product in a similar category, but manufacturers are beginning to realize that a premium product should look different as well. MSB, Wadia, and BMC all demonstrated that boring rectangular boxes are, ahem, square.