This is Part 2 of a two-part Hi-Fi+ report on affordable loudspeakers seen and heard at CES 2013. You can access Part 1 from the Hi-Fi+ homepage.

The Israeli loudspeaker company Morel is fascinating in that it builds some very costly and exotic top-tier high-end models (e.g., the Fat Lady and Sopran floorstanders), yet seems to take equal delight in creating inexpensive but still quite high performance speaker systems. 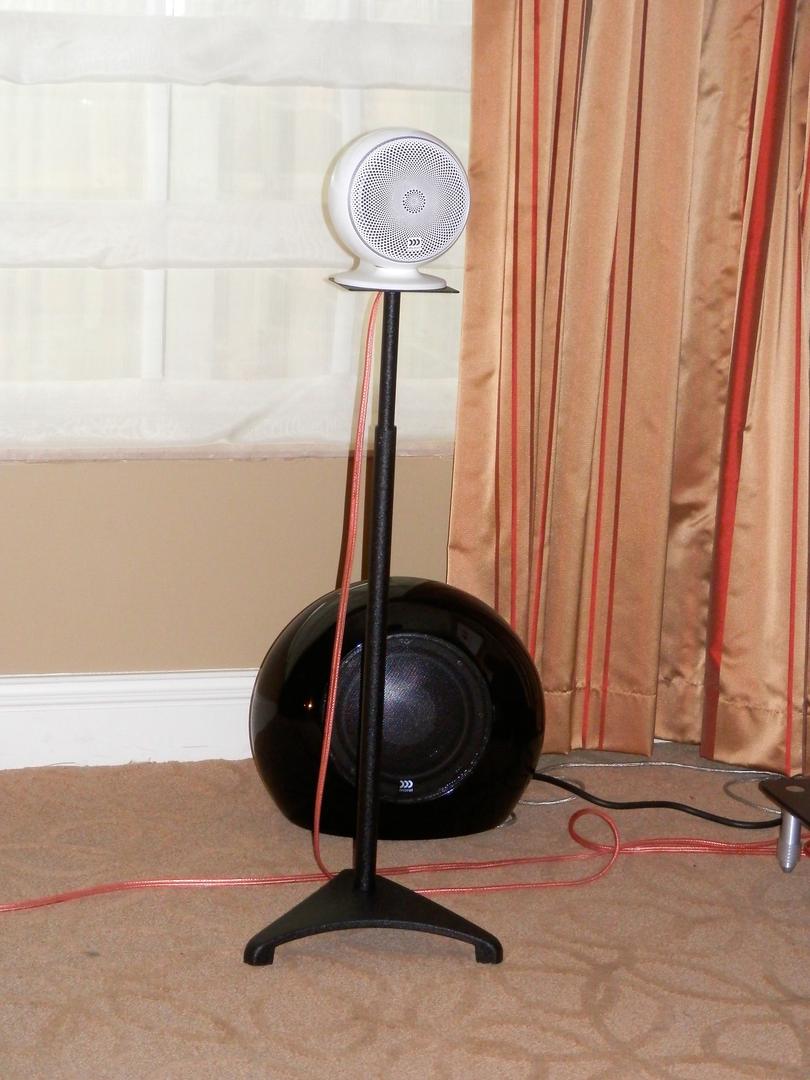 One such cost-effective solution would be the upcoming upcoming SoundSpot MT-3 satellite and SoundSub 2.1-channel system, which should sell for a very manageable $1800. Listeners in the Morel room were favorably impressed by the tiny system’s sophistication and readily apparent value for money.

At CEDIA 2012, Paradigm pre-viewed a special pair of limited edition, 30th Anniversary loudspeakers called the Inspiration (a mid-sized stand-mount monitor) and the Tribute (a comparatively large floorstander). The Tribute is a five-driver, 3-way speaker sporting a 1-inch pure beryllium tweeter, a 7-inch carbon-anodized aluminum mid/bass driver, and three 7-inch bass drivers. The Inspiration, in turn, is a two-driver, 2-way monitor featuring essentially the same tweeter and mid-bass driver as used in the Tribute. 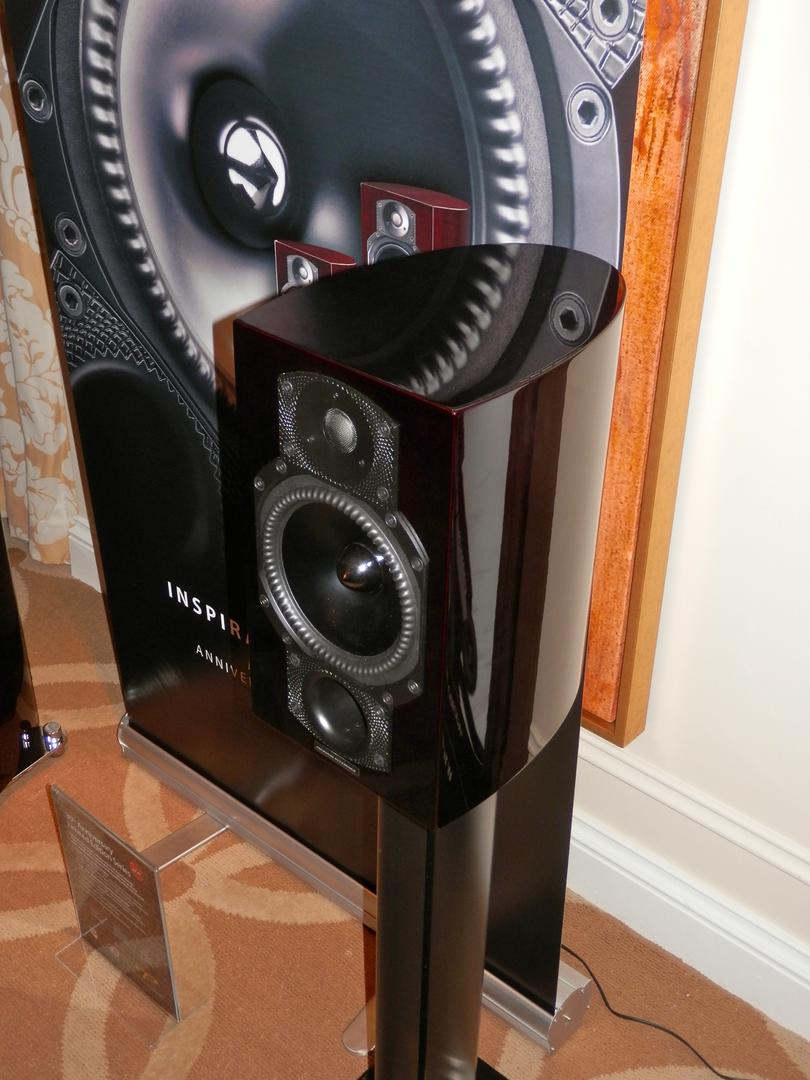 Listeners familiar with Paradigm’s products will note that the 30th anniversary models merge technologies found both in the firm’s upscale Signature models (most notably, the pure beryllium tweeter) and in the mid-tier Studio models, but a brief listen led me to think the 30th anniversary models (and in particular the Tribute) offer performance shaded more in the direction of the upscale Signature range. 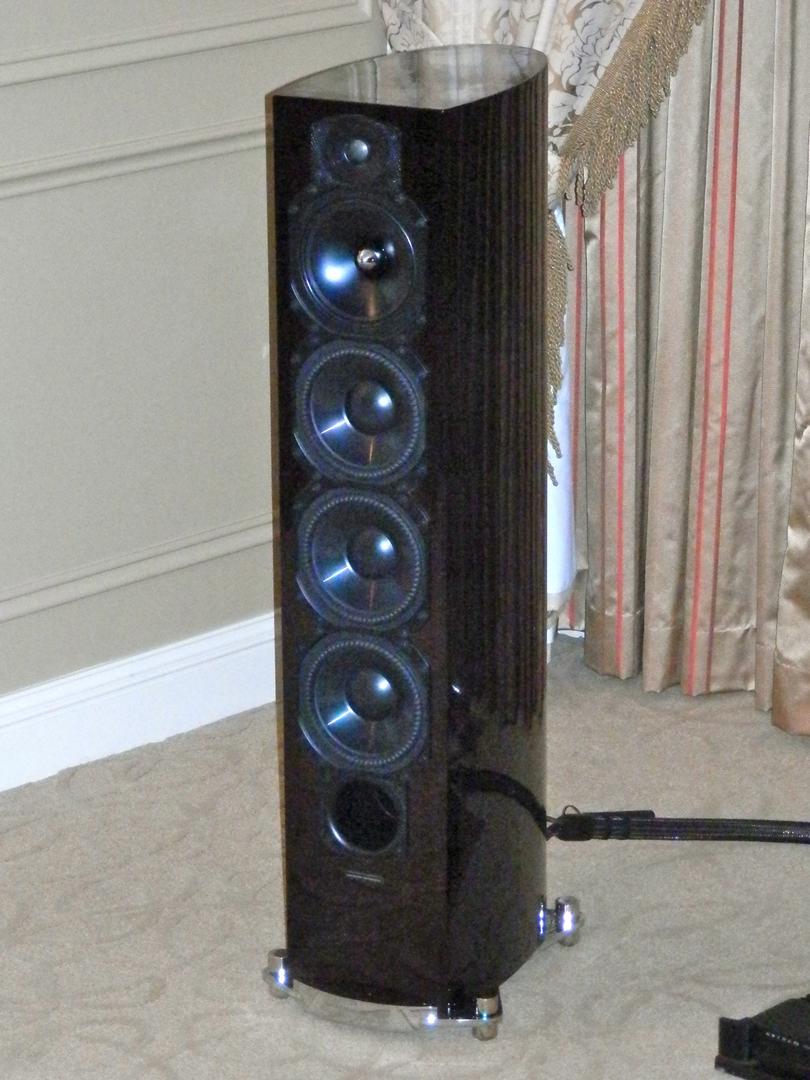 One very cool detail is that both 30th Anniversary speakers are offered in a distinctive and gorgeous deep garnet red finish that is so deep and so dark that it at first appears to be black. But under the lights, the deep red undertones shine through, giving a great first impression.

One word of caution: the 30th Anniversary model will be built in limited quantities (200 pairs of Tributes and 300 pairs of Inspirations). Thus, if you think you might want a pair, it would make sense to talk to a Paradigm dealer sooner rather than later.

European listeners may already be aware of PMC’s DB-1 Gold stand-mount monitors, but for your Yankee brethren the DB-1 Gold arrived as an all-new, entry-level 2-way monitor from the famous British manufacturer. Though quite a compact speaker, the DB-1 Gold features the same level of fit and finish as its larger PMC siblings and, yes, features the firm’s signature transmission line enclosure system. 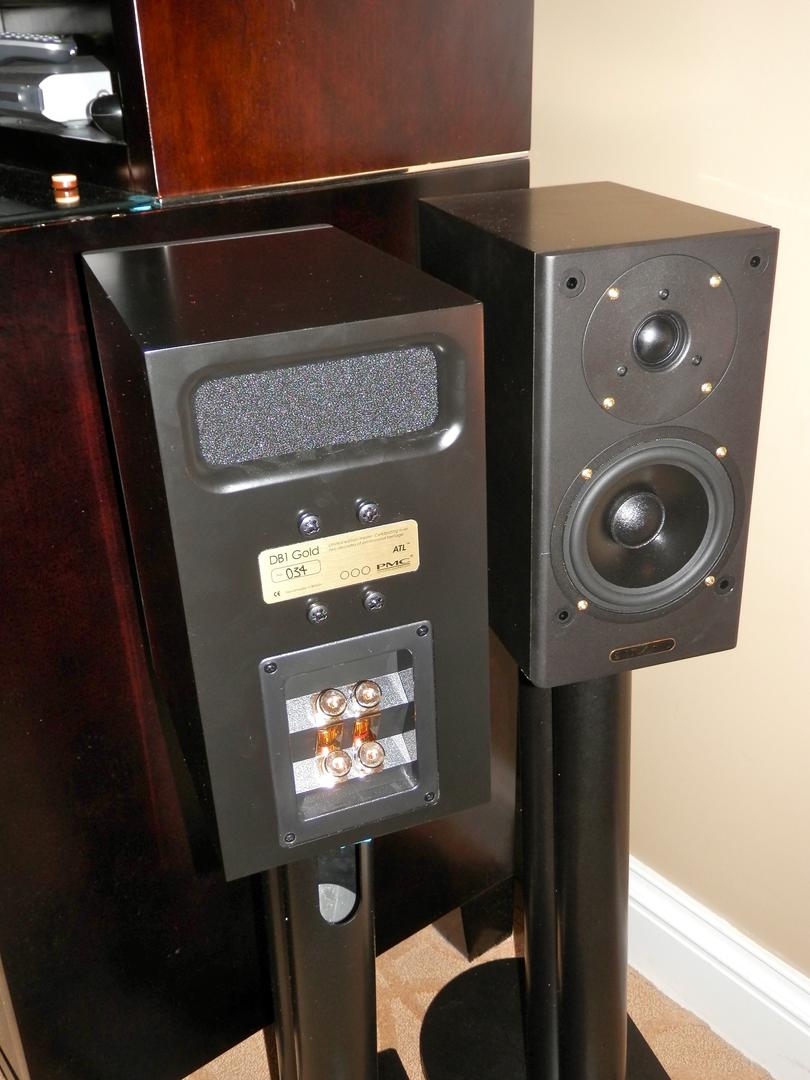 When I first set eyes upon the DB-1 Gold it seemed so compact that I could scarcely imagine a transmission line folded up inside. But when I asked about the transmission line feature, a PMC spokesman looked at me as if I were daft and replied, “Well, what else would we use?”

At CES Revel’s Kevin Voecks was proudly demonstrating one of the most ambitious high-end subwoofers we’ve yet seen—the Revel Rhythm2. Sporting an 18-inch woofer with a 4-inch voice coil, a pair of 2000-watt amplifiers, a highly configurable electronic crossover, and a built-in DSP-controlled room EQ system, the Rhythm 2 adopts a “take no prisoners” approach to low-frequency reproduction. 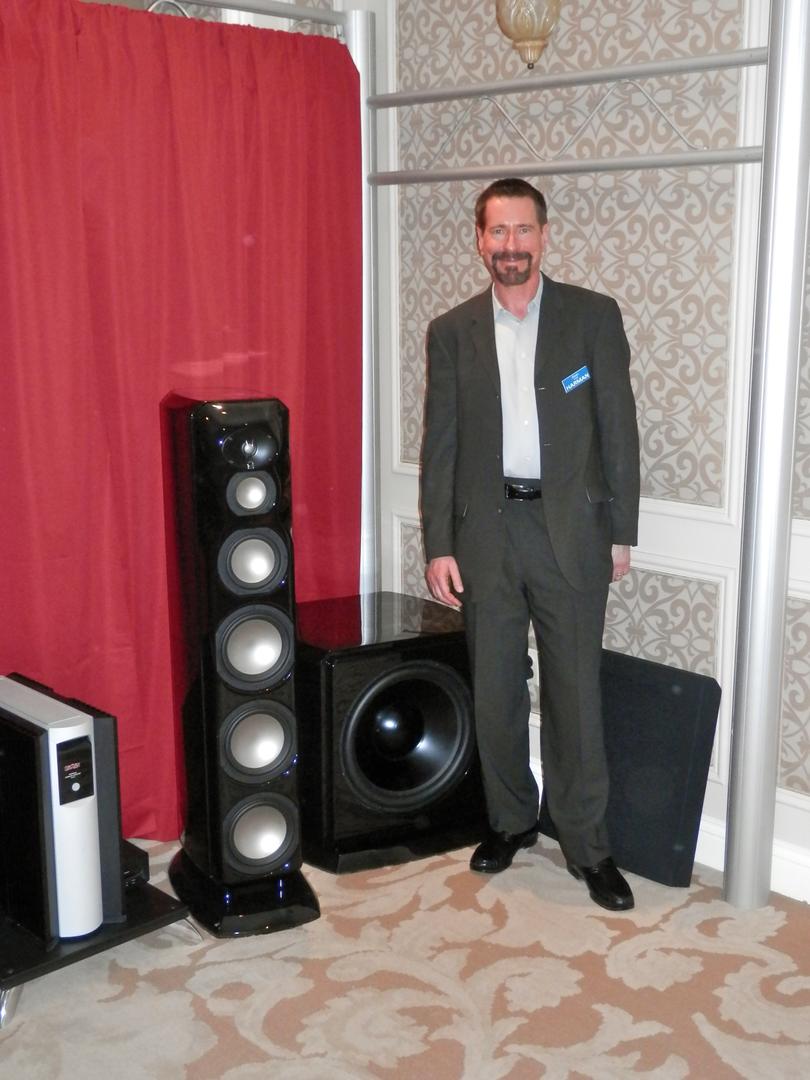 In a series of brief demonstrations where a pair of Rhythm 2s were used in conjunction with Revel’s already excellent Ultima2-series Salon2 floorstanders, Voecks showed how the Rhythm2 could seamlessly and delicately integrate with top-tier high-end speakers, yet he also used a set of very loud low-frequency demo tracks to show the almost limitless dynamic headroom capabilities of his new woofer systems. When pushed really hard, the Rhythm2’s deliver what I noted as “massive LF transient energy,” giving a whole new meaning to the notion of “wretched excess.” 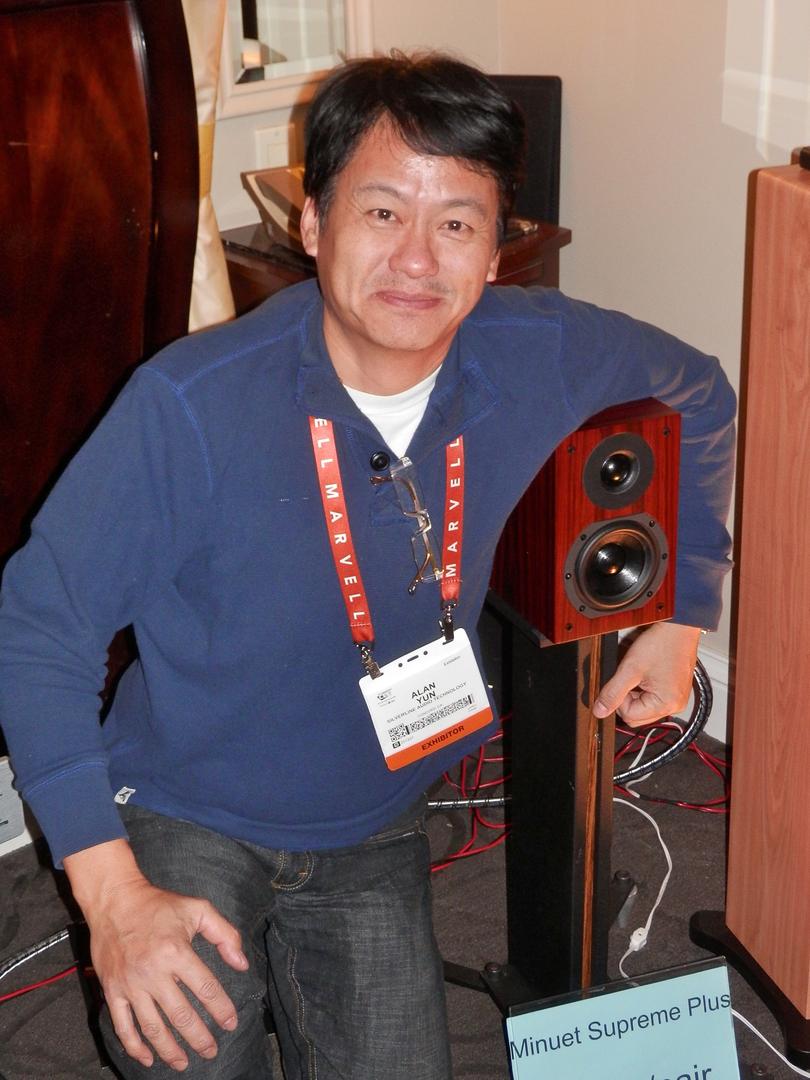 Silverline speaker designer Alan Yun is a bit of a magician in my book, in that he has consistently shown an ability to create what seem like fairly ordinary-looking loudspeakers whose sounds turn out to be much, much greater than the sum of their constituent parts. 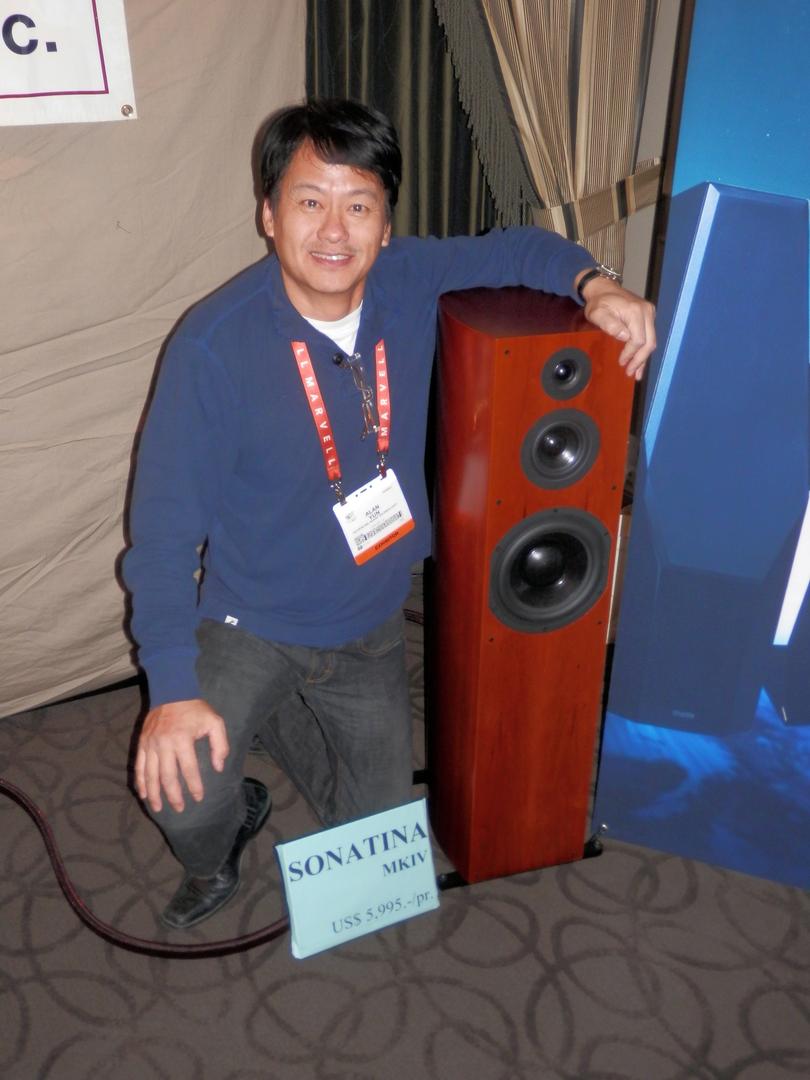 Two perfect cases in point would be Yun’s delightful little Minuet Supreme Plus compact monitors and his very impressive Sonatina Mk IV floorstanders. The Minuet Supreme Plus monitors serve up a delicate, refined, beautifully focused, and finely resolved sound that makes them sound far more expensive than they actually are. The Sonatina Mk IVs, in turn, find the elusive sweet spot between sonic sophistication and refinement on the one hand as balanced against un uncanny ability to handle robust dynamic swings with real power and swagger. The Sonatina Mk IVs, I felt, would make terrific speakers for those who use one audio system both for purist audio applications and for demanding home theater applications.

Sonus faber’s Venere-series speakers may be the Italian firm’s “entry-level” models, but you wouldn’t necessarily know it to look at them or to hear them in action. 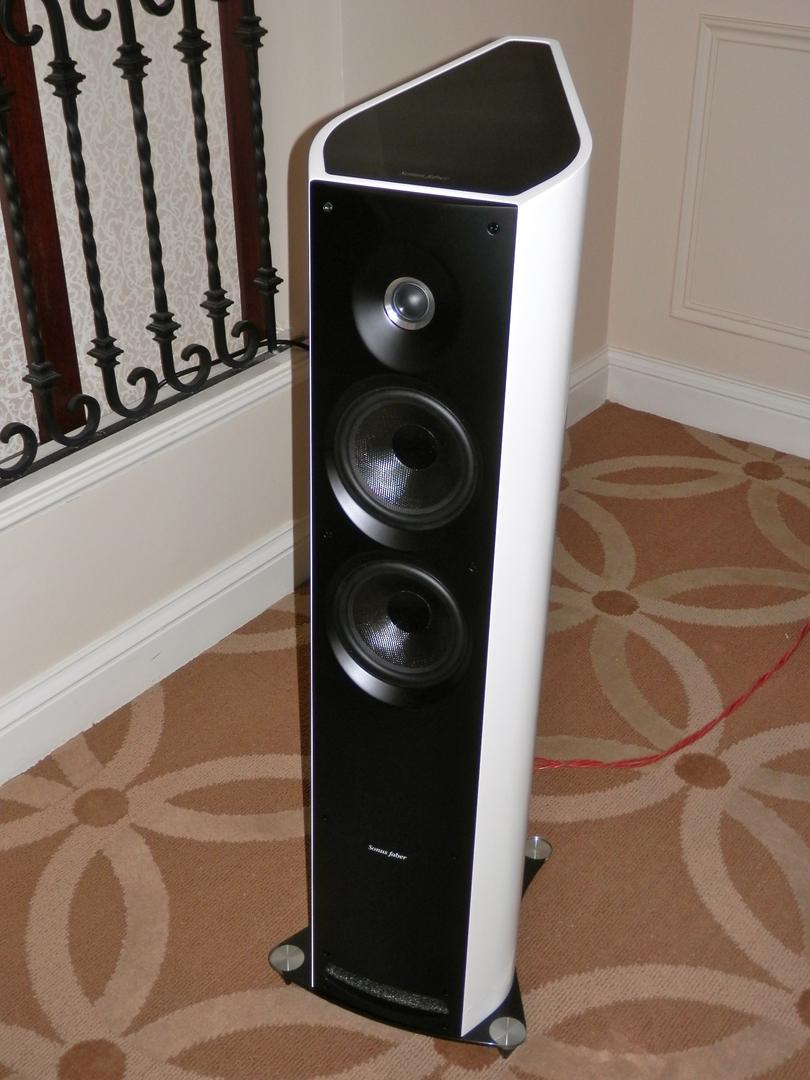 The Venere range, represented at CES by the lovely Venere 2.5 floorstander are just pain svelte and seductive to look at, and they sound pretty suave and seductive, too. This is a well balanced speaker that offer plenty of the expected sonic virtues, yet that I think is just forgiving enough to be easy to listen to and live with over the long haul—even for those who may own fair a number of musically valid but, um, sonically-challenged discs.  In short, I think the Venere offers solid performance, yet without crossing the line to become finicky or fussy about the things it does well. 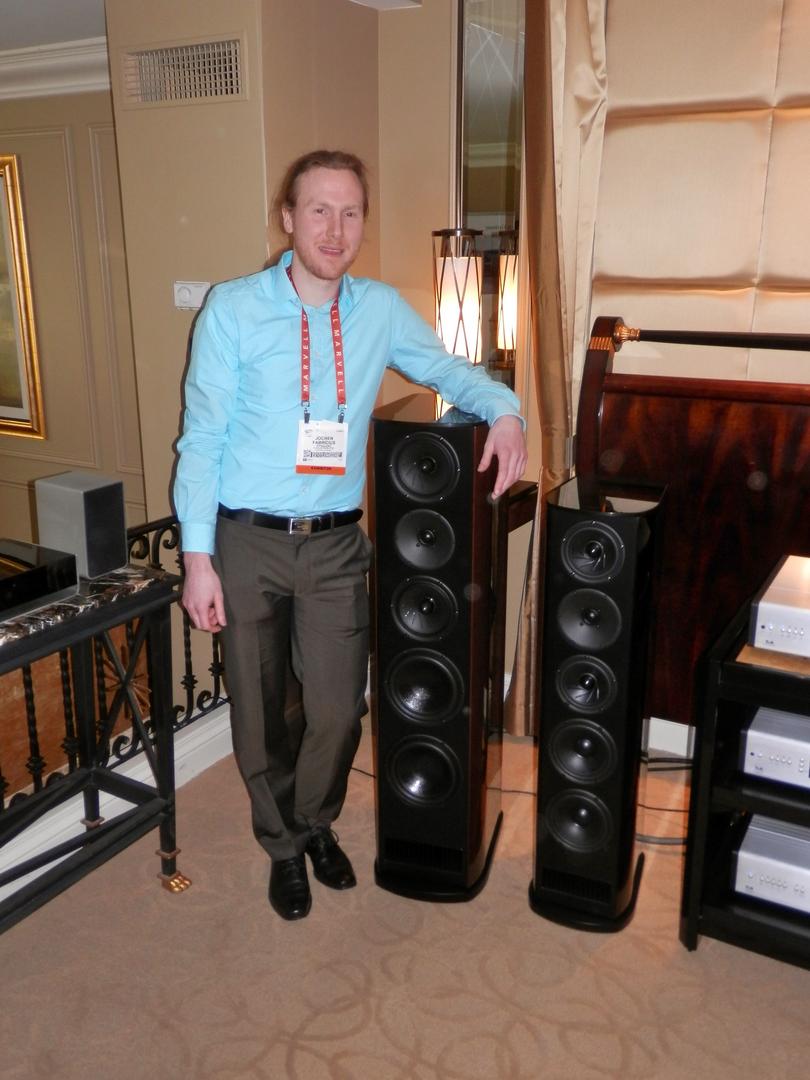 In many world markets, the German firm T + A (a name that, ahem, stands for Theory and Application in the field of audio technology—not like that other “T + A”) is perhaps best known for its audio electronics components, but the fact is that the company also offers a number of ranges of high performance loudspeakers. 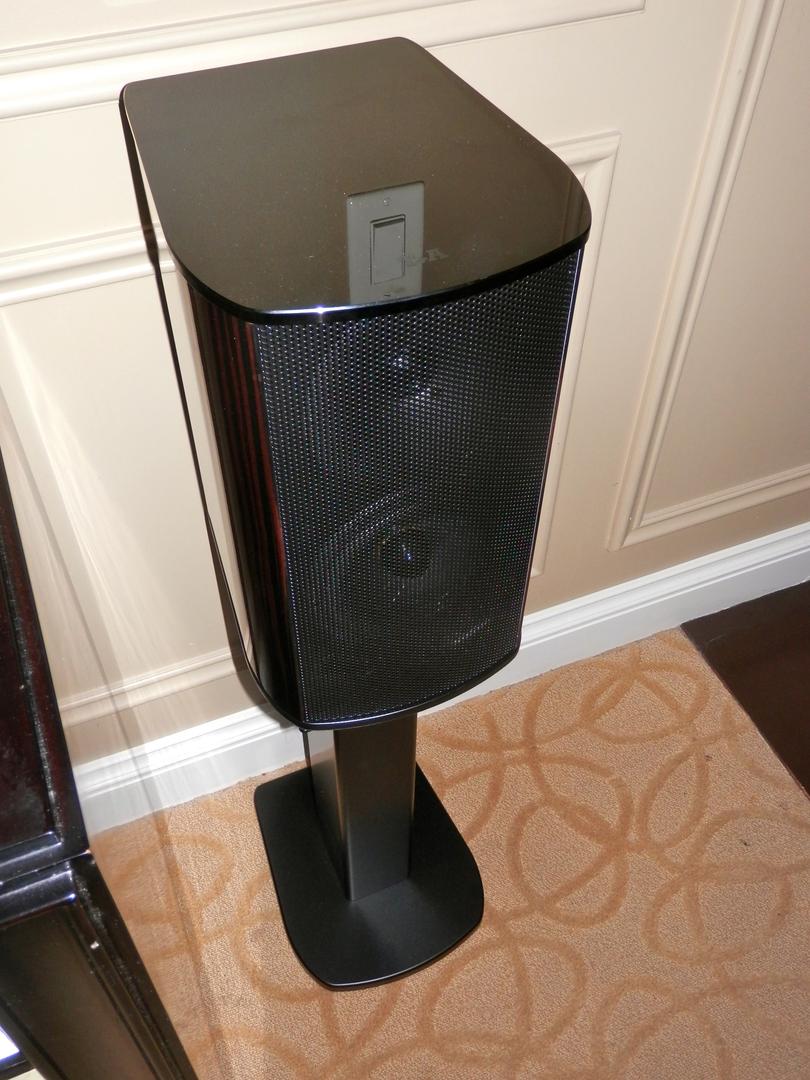 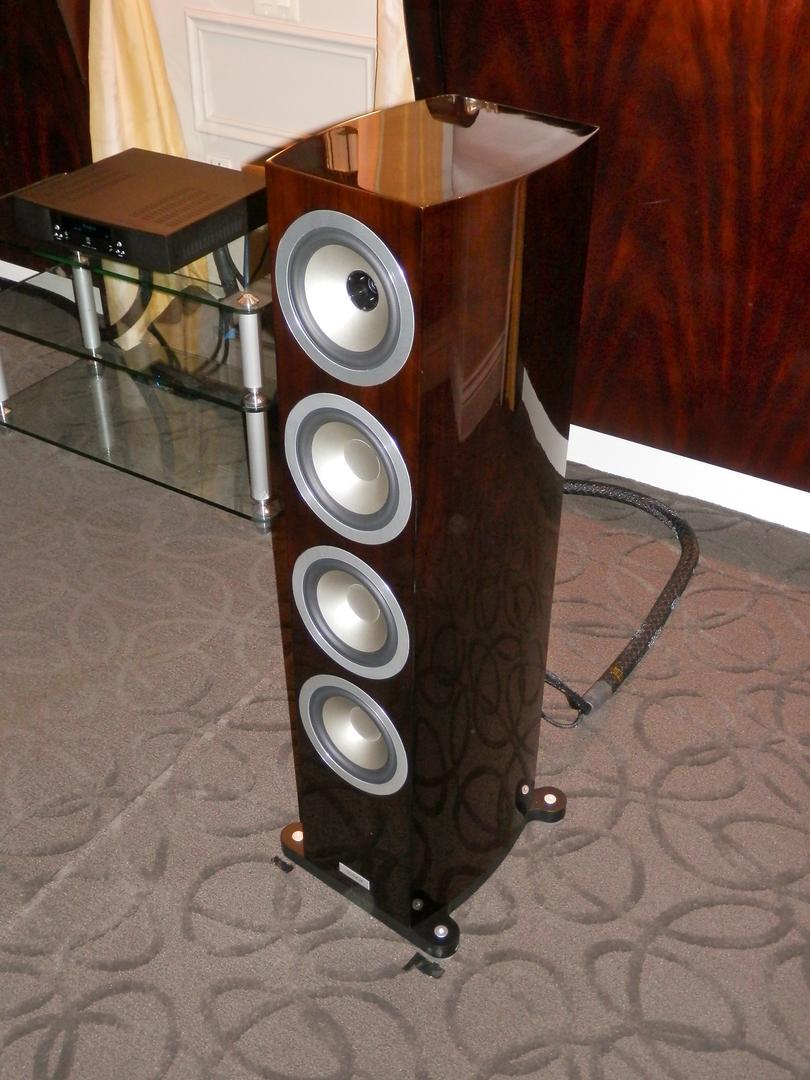 Tannoy describes its Precision range as “a luxury loudspeaker series offering audiophile delicacy and breath-taking dynamics.” NAs you might expect, the Precisions use a 6-inch version of the firm’s signature Dual Concentric drivers. 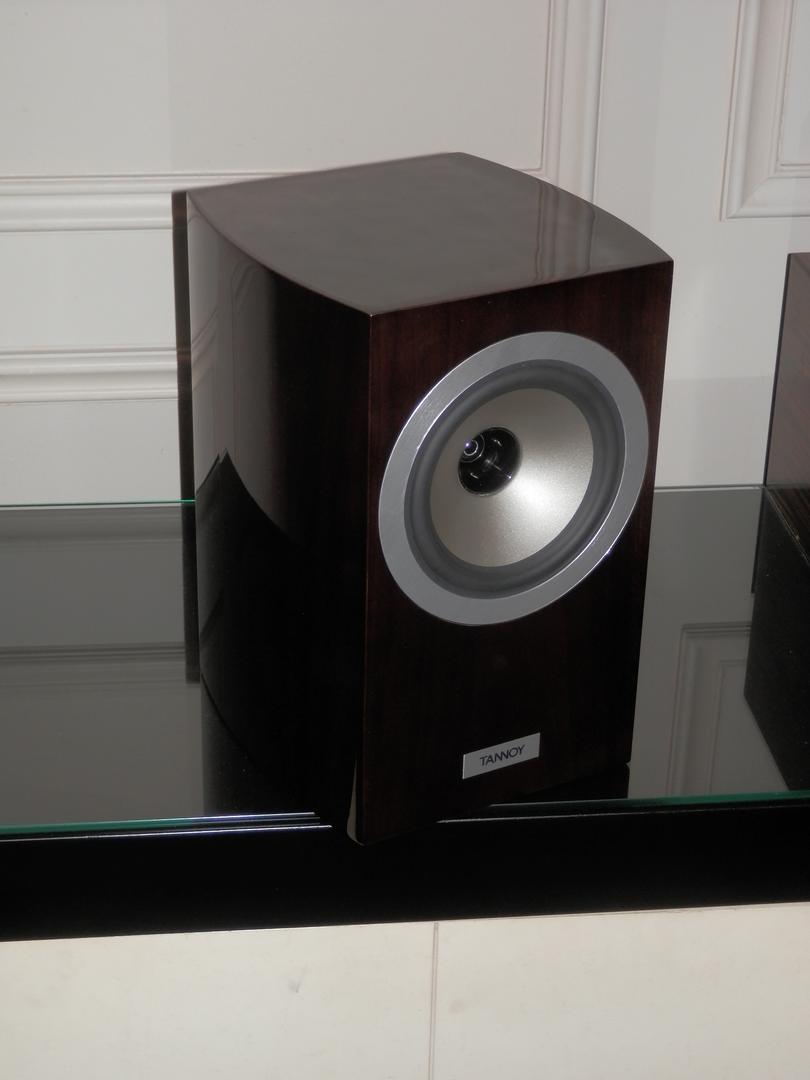 One of the last full-fledged development projects led by the late Jim Thiel involved creation of a time-aligned, phase correct coincident/coaxial tweeter/midrange driver array. The “special sauce” in this very clever driver array involved, as Jim Thiel once explained me, “creative use of precision creased and folded driver diaphragms to achieve the light, stiff, responsive characteristics that most other manufacturer attempt to achieve through use of costly exotic materials.” The coincident/coaxial driver was originally created for the firm’s flagship 3.7 floorstander, but it has since found its way into the next-to-the-top-of-the-line CS2.7 floorstander.

The CS2.7 is a large three-way floorstander that features the same coincident/coaxial tweeter/midrange array from the CS3.7, plus a dedicated woofer, and passive radiator, meaning the CS2.7 stands as something of a “CS3.7 Junior” model.

In contrast, the smaller and much less costly CS1.7 does not get the expensive coincident/coaxial driver array, but gets perhaps the next best thing: a light, fast waveguide-loaded tweeter, but a mid-bass driver that uses the same creased and folded driver diaphragm technology pioneered for the CS3.7. Completing the picture is a very distinctive-looking and very heavily built slot-loaded enclosure. Interestingly the diaphragm of the CS1.7’s mid-bass driver features an almost starburst-like pattern of creases and folds and for this reason has been dubbed the “Star driver.” According to Thiel the CS1.7 is “easily our finest 2-way loudspeaker ever.”

The Canadian speaker maker Totem has been making waves with its Element-series loudspeakers, all of which leverage the firm’s hyper-capable and, some might say, wildly overbuilt Torrent mid-bass driver (the driver looks like something an aggressive and forward-thinking aerospace firm might have cooked up). But the proof is always in the listening and in that area the Element-series speakers do not disappoint; on the contrary, they leave listeners slack-jawed with astonishment and delight. 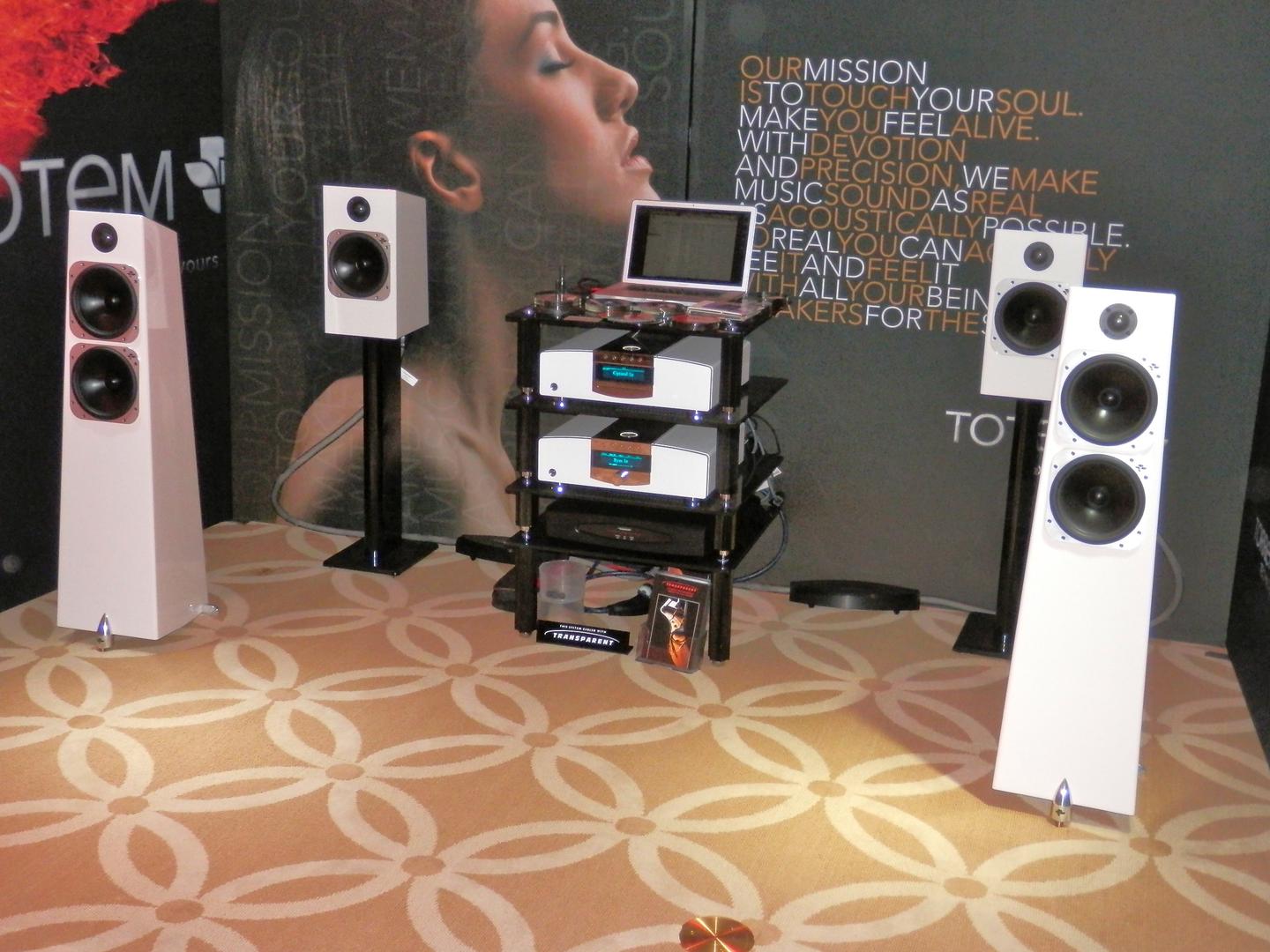 A perfect case in point would be the Element Fire stand-mount monitor, whose refined, powerful (and I mean very powerful), wide-bandwidth sound forcefully redefines listeners’ expectations as to what a relatively compact monitor can be and do. In all seriousness, the depth and power of the Fire’s low-end response is pretty mind-blowing, because this 16.6-inch tall monitor sounds—for most practical intents and purposes—like a full-range floorstander. (In fact, many visitors to the Totem room heard the Fires but assumed they were listening to the more than twice as expensive Element Metal floorstanders on display nearby.).  That’s how expansive the Element Fire really is.

In my listening notes on the Element Fire I jotted down just two phrases: “hearty and soulful” and “dynamic as all hell.” Consider this: Just how many stand-mount monitors could you describe in that way while maintaining a straight face? 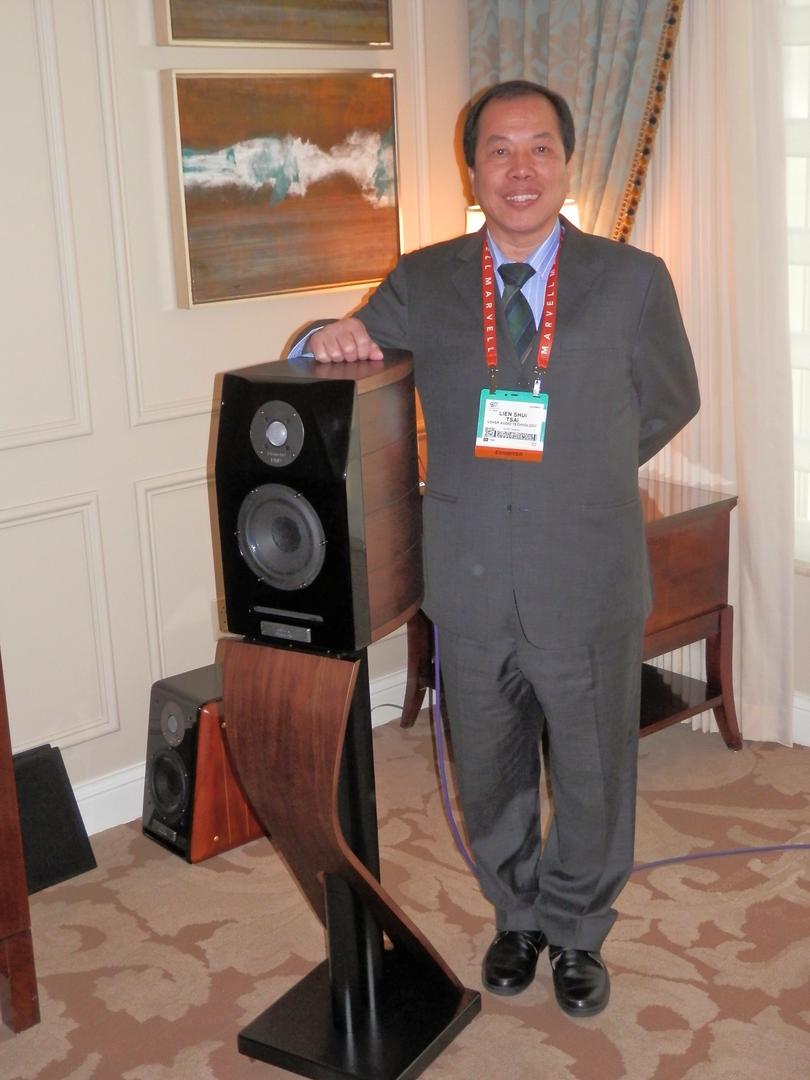 If you looked back over the past several years, you could build a good case that the single loudspeaker that did the most to put the Taiwanese firm Usher Audio on the high-end audio map was the terrific and overachieving Be-718 stand-mount monitor.  Now, Usher has announced what will likely be a worthy successor to the well—loved but now discontinued Be-718: namely the new Mini X monitor. The Mini X features Usher’s signature 1.25-inch Diamond DMD tweeter, a 7-inch Usher 8948A mid-bass driver identical to the one used in the Be-718, a new crossover network, and a new, more rigid cabinet patterned after the almost boat-hull-shaped enclosure used in the firm’s top-tier Dancer-series speakers. Moreover, the Mini X will be offered with optional “waveguide” stands said to help smooth and improve the monitor’s low frequency response. 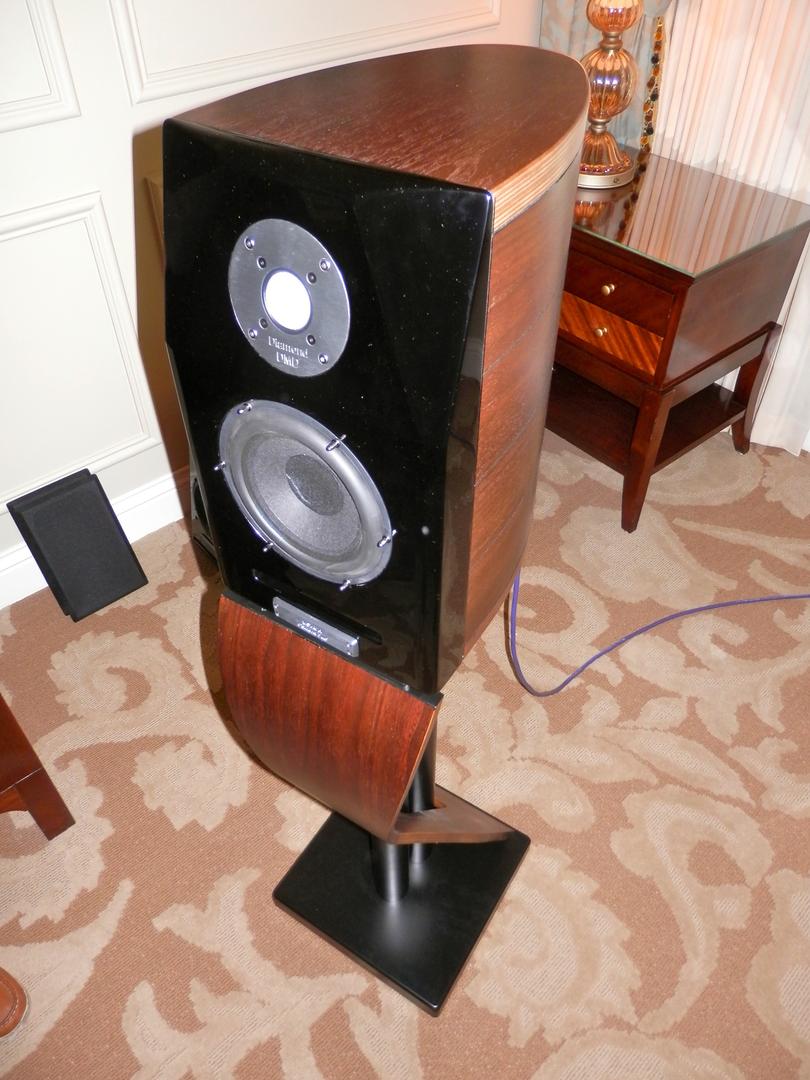 Based on a brief listen, I felt the Mini X took several meaningful steps forward from the already impressive Be-718, especially in the areas of openness and transparency, not to mention a new free-flowing and mellifluous quality that has taken a very, very good monitor speaker and made it even better. We can’t wait to hear the Mini X with the finalized version of its cool-looking waveguide stands.later.

Those of you who remember the release of Vienna Acoustics’ top-tier Klimt-series speakers (The Musik and The Kiss models, to be specific) may recall the Vienna spokespersons told us at the time that the top-tier models were only the beginning of a broader development effort with more widespread applications. Now that we’ve seen Vienna’s new Beethoven Imperial Grand floorstander, we see what they had in mind.

At the heart of The Music and The Kiss designs is a radical coincident/co-planar tweeter/midrange driver that gives the Klimt-series models their pure, neutral, well balanced now. Now, a variation on that same coincident driver design has found its way into the considerably lower-priced Beethoven Imperial Grand floorstanders. But that’s not the only similarity to be found, because the Beethoven Imperial Grand also sports, as do the Klimt-family models, a Murata super-tweeter and a trio of so-called “Spider Cone” woofers apparently patterned after those used in The Music.

While by no means cheap, the Beethoven Imperial Grand struck me as represented a bargain of sorts, in that they deliver many of the same qualities that make Vienna’s flagship The Music such a special and desirable loudspeaker, but at a more accessible price point.