Tweedle Dee or Tweedle Dum, the lady or the tiger, the devil or the deep blue sea, truth or consequences— and several other either/ors too rude to print— flashed through my mind as I unboxed Cary’s newest pair of Castor and Pollux-like DACs, the DAC-100 and DAC-100t. The “t” on the second DAC-100 stands for tube, which differentiates the DAC-100t’s analog output stage from the DAC-100’s solid-state one. Except for this difference, they are technological twins.

The Tech Tour
Available in either a silver or black front panel, the DAC-100 and DAC-100t look virtually identical with an illuminated on/ off switch, a series of seven LEDs that designate the current bit-and sample-rate, and five LEDs with matching buttons below to choose the input source and phase. The rear panels of the DAC-100 and DAC-100t have one pair of single-ended RCA and one pair of balanced XLR analog outputs, two TosLink digital inputs, two SPDIF RCA digital inputs, one USB 2.0 input, and a standard IEC AC connection.

Inside both DACs you will find two toroidal transformers—one for the digital power supply and one for the analog circuits. The analog power supply also has a Faraday shield to reduce noise from external sources of EMI and RFI. A front end using a Wolfson WM8805 chipset handles digital inputs. It supports the four SPDIF digital audio inputs (two SPDIF and two TosLink). For the USB digital input the DAC-100/100t uses XMOS processing able to handle multiple 192/34 bitstreams (if needed). The next step in the digital stream is a pair of ESS Sabre ES9023 chipsets that do the digital-to-analog decoding before sending an analog signal to the DAC-100/100t’s analog output stage.

After the ESS Sabre ES9023 chipset, the two Cary DAC-100s part ways in design. The DAC-100 uses high-speed monolith buffers operated with selective feedback for its analog section. This buffered solid-state output circuit is based on previous Cary analog output designs. In contrast, the DAC-100t’s analog output section uses two 6922 dual-triode tubes. The reason for choosing the 6922 tube over something like the ubiquitous 6DJ8 is that the 6922 dual triode only needs a 24V rail power supply as opposed to the much higher rail voltages required by a 6DJ8. Also, the Cary 24V power supply is tightly regulated, which is easier to accomplish at 24V than 200V. 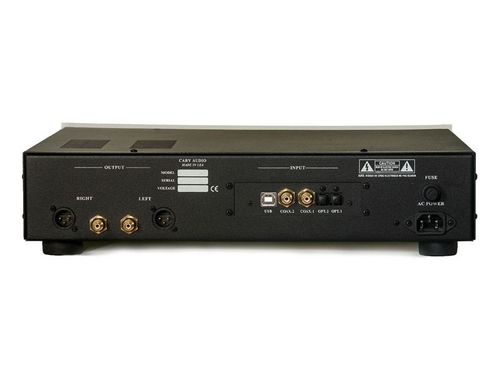 The DAC-100 and DAC-100t both support up to 192/24 via SPDIF and USB, and at least 96/24 via TosLink (some TosLink transmitters will support higher bit rates up to 192/24). Currently, the DAC-100 does not support the DSD formats, but Cary president Billy Wright told me that by fall Cary will have an upgrade path for the DAC-100 to support DSD. This will very likely require a trip back to the factory to change parts on the digital board and install newer firmware. It is also possible that Cary will be able to offer a kit to dealers with service departments so upgrades can be done locally.

The Sound of Two DACs Working
Given that the digital sections of the DAC-100 and DAC-100t are identical, their analog sections are the reasons for any sonic differences. The big question is whether these differences are audible, and whether the $500 upcharge for the DAC-100t is money well spent.

Fortunately, comparing the DAC-100 to the DAC-100t in matched-level real-time comparisons was not too hard to do. Both the Lexicon RT-10 CD transport/player and Logitech Squeezebox Touch network-streaming player have multiple digital outputs so I could run one to each of the two DACs. Although both sources had more than one digital output, neither had two of the exact same output, so to make sure that the differences I heard were the result of the DAC-100’s analog rather than digital processing, multiple listening sessions where each DAC was connected to either SPDIF or TosLink were necessary. At the end of the review period I placed the DAC-100 into my computer audio system to listen to its USB input.

Obviously the DAC-100 and the DAC-100t shared many sonic characteristics since they have identical digital sections. In fact, the sonic similarities between the two units far outweighed their differences. The sonic differences I did hear weren’t the sort of night-and-day ones you might hear when comparing DACs from two different manufacturers. They were much subtler—so subtle that only after extended rather than quick A/B tests did they reveal themselves.

Both DACs did a superb job of preserving all the spatial cues in my own live classical concert recordings of the Boulder Philharmonic. On my recording of the modern classical piece by Ruby Fulton, Deadlock, which features a beatbox soloist, both DACs captured the three-dimensionality of the recording and located both the soloist and his amplifier on stage quite accurately. Unlike some tube linestages, which can overemphasize depth, the DAC-100t’s mapping of the soundstage matched the DAC-100’s rendition perfectly.

Starting with the bass, the DAC-100t had slightly more low-frequency energy, but the overall bass response was a bit less well defined. The DAC-100 had tighter and leaner bass with better damping, less overshoot, and quicker decay.

Upper frequencies through the DAC-100t had slightly more air and openness than the DAC-100, but the DAC-100’s greater micro-dynamic speed and control provided a neater and more precise presentation.

Overall the DAC-100t had more additive colorations, especially in the bass, while the DAC-100 was slightly subtractive in its upper frequency ranges. Which is “better” will depend on the rest of your system. In my system, I preferred the DAC-100 because of its superior speed, micro-dynamics, and sense of control. But for some systems, the DAC-100t’s fuller bass, more relaxed midrange, and greater top-end air could make it a better choice.

Two Flavors of Ice Cream
With the DAC-100 and DAC-100t Cary has created two excellent mid-priced DACs designed to appeal to slightly different listeners. Both deliver excellent sonics, but each has its own sonic “flavor” that will appeal to audiophiles with different listening priorities. I encourage you to listen to both and make your own choice—you can’t go wrong with either one.