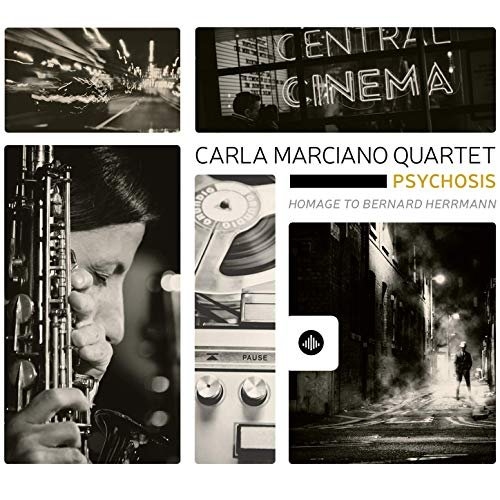 There was a period when Bernard Herrmann (1911–1975) was the go-to composer for soundtracks to movies exploring the dark side of the human psyche. Examples of his handiwork include the scores for Taxi Driver, Twisted Nerve, and the Hitchcock films Marnie, Psycho, and Vertigo. Alto and sopranino saxophonist Italian Carla Marciano explores those themes plus a Harry Potter melody on Psychosis, and she evokes sinister moods so convincingly it comes as no surprise that she fell in love with Herrmann’s music at a young age. The spell is cast instantly; just listen to the long, sinuous lines she weaves during the introduction to the opening cut, “Taxi Driver,” and you’ll know Marciano has noir jazz in her veins. Alessandro La Corte plays electronic keyboards on some of the slow, brooding passages where Marciano claims the foreground, but during La Corte’s solos he switches to acoustic piano, where he dishes up some fiery McCoy Tyner-esque solos that in turn launch some Coltrane-influenced Marciano statements on sopranino. I recommend Psychosis to anyone who loves the music of Bernard Herrmann or who wants to hear jazz that’s modern, hip, and edgy. Carla Marciano, you have a new fan.

This elevated body of work helped define the singer-songwriter era. […]

Any list of “important female composers” begins with Hildegard of […]

Joe Strummer’s solo catalog is in good hands, having recently […]

A single spotlight reveals a book held by delicate hands, […]