Listening
Let’s have some fun. Pretending all I had was a mobile device (Android phone) and the CXA81, I started by pairing them via Bluetooth and brought up the Tidal app on my phone. I began with Sonic Temple from The Cult, another great British rock band, and the sound was decent but nothing to write home about. I blamed the Bluetooth connection. (My past experiences with Bluetooth have not really wowed me, even in its highest-fi version—aptX HD—although there is no guarantee that my phone was actually utilizing aptX HD to full effect.) Sonics could have also been limited by less-than-full-bandwidth Tidal data going to my phone (even though it was connected to WLAN). You do get full Tidal bandwidth and quality (lossless CD or even better from MQA tracks) from a WLAN or Ethernet or Windows PC-connected CXN V2. Don’t get me wrong, what I was hearing completely blew away any music I have heard directly from a phone or tablet or even laptop PC speakers. But it was not up to high-end home-audio standards. 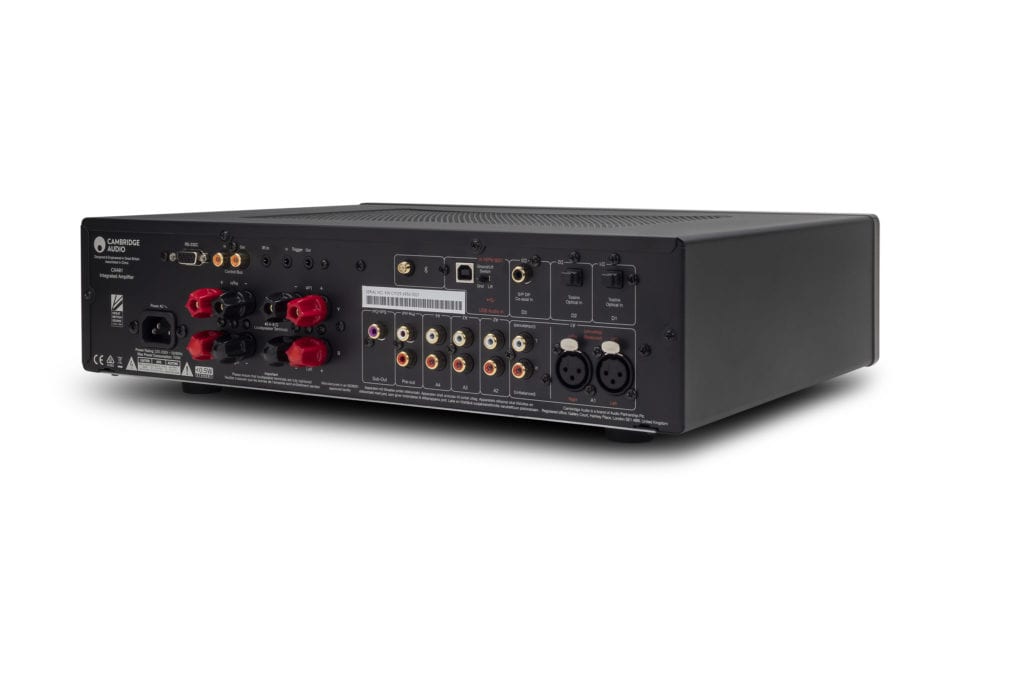 Time for upgrade Number One. I sent the 16/44 PCM digital from Sonic Temple spinning on my Rotel RDD 980 CD transport to Input D3 on the CXA81 (SPDIF coax digital). Wow, this was more like it! Subtle details were popping out of the mix, drum beats had more power and impact, and there was a much better sense of space and reverb. It is incredible how much you are missing from data-reduced music like MP3s and Bluetooth-transferred mobile-phone streaming. With full use of all the capabilities of the DAC, preamp, and amplifier, the sound now coming out of the CXA81 was really quite good. Yes, it was capable of long-term listening satisfaction. But we’re not finished yet.

Then, you guessed it, I had the CXN V2 revved-up and ready to go for upgrade Number Two, with the same tracks from Sonic Temple streamed to the Tidal app on my PC via WLAN, and the CXN V2 connected to the A1 analog input on the CXA81 with balanced XLR AudioQuest Mackenzie interconnects. This was another real step up in sound quality! Billy Duffy’s guitar distortion had sharper teeth. Ian Astbury’s voice had a more convincing gravelly grumble. Subtle sounds and details were even more noticeable. Things which should be smooth and pure were, like solo vocal and sustained notes on solo guitar. The reverb gave me an enveloping sense of the size of the room (or artificial space) The Cult was playing in. Each individual instrument was easy to follow in the mix; even when things got busy and loud, nothing was covered up by anything else. The bass guitar was well fleshed-out as well.

To cross-check, I also tried my CD transport connected to a coax digital input on the CXN V2. Listening to Theater of Pain by Mötley Crüe, I started feeling there were some limitations to the recording quality of this album. So I switched to Mötley Crüe’s self-titled album from 1994 instead. The more sophisticated recording quality on that album brought out some very good qualities of the Cambridge duo. All of this just served to reinforce what I had heard when going from my second to third configuration: that the CXN has a much more serious DAC than the one that is built into the CXA81. Dynamics were more powerful, as if the drummer were hitting the drums harder. Subtleties about guitar sound, distortion, and effects had more character. Voices were more natural and liquid. There was a greater sense of space.

Most of my listening now included the CXN V2, through either Tidal or CD transport to the CXN’s digital input. These two provided the best sound, virtually identical in quality (unless the album had been remastered in the last 15 years or so, where the more recent Tidal version sounded better). For Tidal I tried navigating directly to albums from its menu and remote, which was annoying due to the small display, limited buttons, and slow scrolling I faced with large lists (my album favorites are over 600 now, and growing). I also tried using Cambridge’s StreamMagic app on my Android tablet. That was easier, but had its own issues, as after I’d selected and listened to a track it would move on to some other track that I’d been listening to before, forcing me to manually click on each new track I wanted to hear. (This app was recommended in the Quick Start sheets that came with both units, partly because it includes some configuration and set-up controls for the CXN V2.) You would think the default playback mode for an app would be the same “play the whole album from start to finish” that we’ve become accustomed to since the LP was invented in 1948.

Then I discovered the Cambridge Connect app, which is much better, and installed it on the tablet. Easier to navigate, clearer in layout, easier to search, nearly comparable to the Tidal app itself. I could let an entire album play (or a playlist), or pick and choose individual tracks like a DJ. And, of course, it was using Tidal native, with full data rate and sound quality (16-bit/44.1kHz FLAC) but with no MQA decoding, which was an issue. Many albums that I love are available in MQA on Tidal “Master,” and even my humble Windows PC with Soundblaster Audigy sound card is capable of decoding MQA (at least the first unfold, which is the most important one). There is a major noticeable upgrade in quality going from CD (Tidal calls it “Hi-Fi”) to MQA, even though the overall data rate is the same. So I decided to try “casting” to the CXN V2 from Chromecast (Google Home app), and my tablet was able to pair with it and send sound to it. Then I brought up the Tidal app and played from that, hoping it might decode MQA. However, I was not getting full fidelity from this configuration. It obviously sounded worse, data-reduced, (even with CD-quality albums), as if there were another CODEC chain the music had to pass through with Chromecast to the streamer. So that option works, but not if you want the best sound.

Focusing here on Rega, what I will report is what […]

Before getting to the sound, a few words about connectivity. […]