“From the Land of Great Rock Music.” “Great British Sound!” Both of these components came with these stickers affixed to them. And that worked for me. Partly because I have a long-time affinity for British rock (particularly from the 70s, 80s, 90s), and partly because I tend to be drawn to hi-fi equipment from the UK. Since Cambridge Audio has been making highly respected components for 50+ years now, I expected a lot from this reasonably priced duo—the British-designed CXN V2 network audio streamer and the CXA81 integrated amplifier. I will examine them individually and together, since used jointly they make up a nearly complete system—just add cables and speakers, and you can stream from your phone, PC, or network.

CXN V2 Network Player Features
The $1099 CXN V2 is the second generation of Cambridge’s very well received streamer and DAC. It is based on the dual 24-bit Wolfson WM8740 DAC with a “bit-perfect signal path” and jitter suppression. Cambridge’s proprietary ATF2 upsampling algorithm increases the bit-rate of all sources to 24-bit/384kHz, and the analog filter uses a two-pole dual-differential Bessel topology.

Available inputs on the CXN include wired USB, coaxial, TosLink, and Ethernet (UPnP) connections, along with wireless AirPlay 2 and Chromecast. Tidal and Qobuz have native support in the Cambridge app, which also provides high-quality Internet Radio streaming thanks to MPEG-DASH support and HLS. The CXN V2 is Roon-ready, but if you need Bluetooth aptX you can separately purchase a BT100 Bluetooth receiver. Compatible audio formats include ALAC, WAV, FLAC, AIFF, DSD (64), WMA, MP3, AAC, HE AAC, AAC+, and OGG Vorbis. WLAN capability (via included USB transmitter) is IEEE 802.11 b/g or n (2.4GHz).

The CXN V2 is too complex and supports too many different types of streaming and music files for me to test every single one. Even if I had high-res files of each supported type stored somewhere (which I don’t), it would be a Herculean task to try them all. But, as Cambridge is offering free shipping, a 60-day return (only slightly shorter than my review period!), and unlimited online/phone support, doing your own in-home research and auditioning is a breeze. 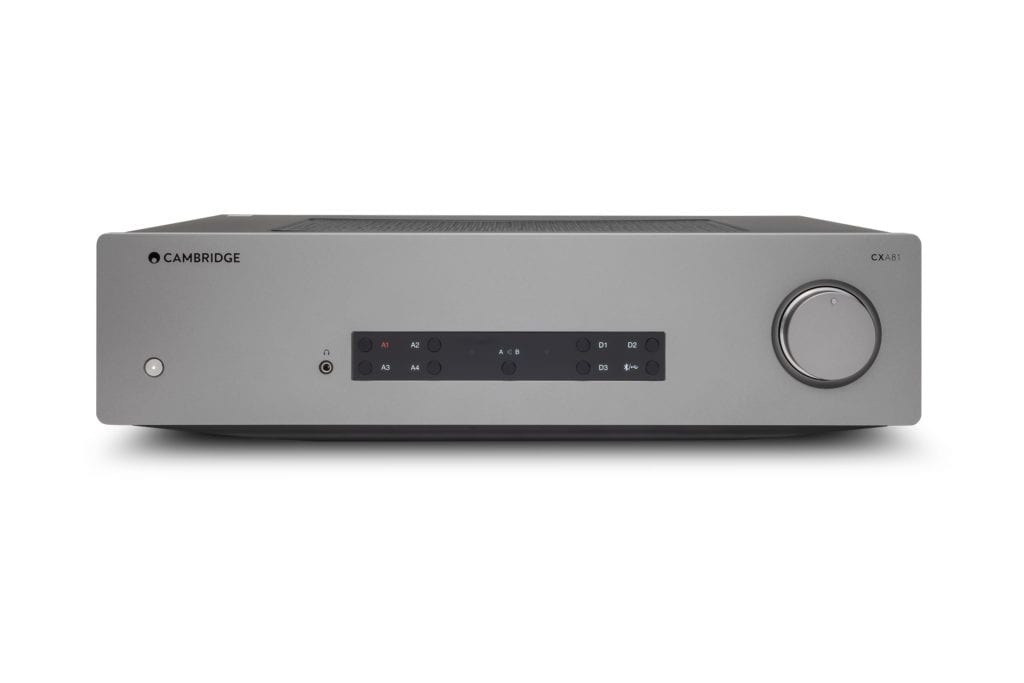 CXA81 Integrated Amplifer Features
The CX series is actually the midrange of Cambridge’s offerings, with the CXA81 positioned between the extremely affordable AXA35 and the top-of-the-line Edge A at a cool $6k. Priced at $1299, the CXA81 is rated at 80Wpc of Class AB solid-state power. It costs $300 more than the CXA61, but offers only 20 additional watts per channel. Since that only equates to about 1dB greater sound volume capability, which would barely be perceptible, I suspect much of the unit’s added price has gone towards refinements that improve sound quality. Cambridge does state that only the CXA81 has physically separate, symmetrical left and right channels for the analog stages.

Along with the typical four pairs of RCA analog line-level inputs, this amp includes one pair of XLR balanced ins. There are digital inputs, as well—SPDIF coax, TosLink, USB, and Bluetooth (aptX HD)—to drive the onboard high-quality DAC. (I assumed that this DAC was not quite as good as the one in the CXN V2, but more on that later.) The CXA81 features an entirely new digital board, with the ESS Sabre ES9016 D/A chip. It can handle digital files up to 32bit/384kHz, or DSD256. As for outputs, there are two sets of stereo speaker terminals, and both sets can be turned on and off independently. Also included are pre-out, subwoofer out, and a headphone jack on the front panel (plugging in ’phones will mute all other outputs).

Cambridge Audio also includes its proprietary CAP5 five-way protection system to ensure long-term reliability for amplifiers and the speakers they are connected to. CAP5 monitors for DC at the speaker outputs, over-temperature, over-voltage/over-current, short circuits, and intelligent clipping detection.

Both units come with a two-year parts and labor warranty in the USA.