Held at the Crowne Plaza Hotel in Burlingame in the San Francisco Bay Area from August 3-5, this year’s California Audio Show (CAS) was quite memorable. CAS-organizer Constantine Soo and his team should be congratulated for putting on another fine audiofest, which included a number of U.S. premieres. As with all audio shows, the hotel-room sonics typically (though not always) fell short of what you might hear in your own home or in some of the best dealer listening rooms. However, consumer shows like this one offer audiophiles and enthusiasts an opportunity to hear a lot of different systems on a relatively equal footing and to get a better idea of what’s new and intriguing. For me, these gatherings also have a lot of fantasy value, as I find myself daydreaming about a few of the outstanding products I’ve heard long after the show is over. 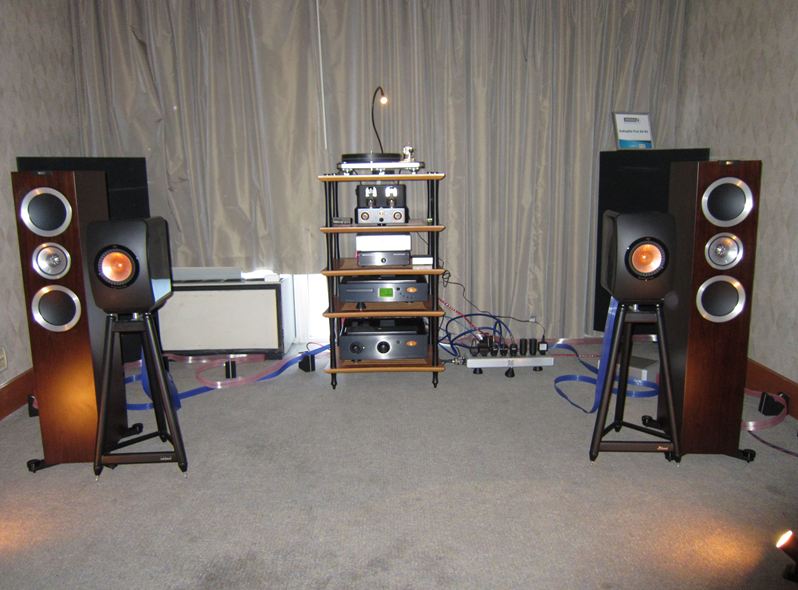 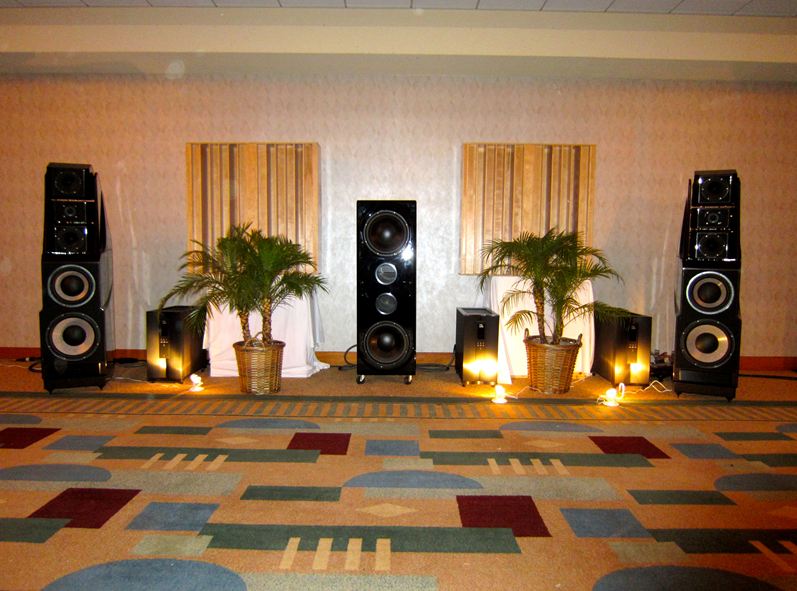 One U.S. premiere that really had me daydreaming featured the Clearaudio Master Innovation turntable ($27,500), with a Clearaudio Universal 9-inch all-carbon-fiber tonearm and a Benz Ruby Z cartridge on a Clearaudio Everest turntable stand. Since seeing and hearing it, my mind has been spinning: If I bought the Clearaudio Innovation Wood that I lived with so joyfully, I could ultimately add magnetic drive and other innovations migrated from Clearaudio’s Statement turntable. That’s extremely enticing! This front end, along with the Aesthetix IO phonostage, Chord electronics, and Kubala-Sosna cables, helped the marvelous KEF Blade sound better than I’ve heard it at any show, yielding terrific soundstaging, natural music timbre, remarkable coherence (for a multi-driver system), and well-controlled deep bass. 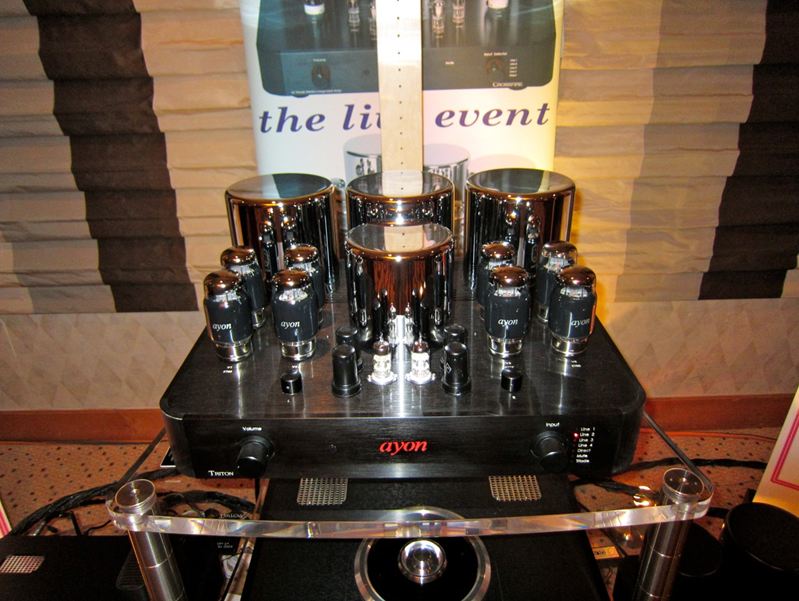 Three other U.S. premieres that I described in my previous blog also captured my imagination. I found myself thinking that the drop-dead gorgeous Ayon Triton III stereo tube integrated amplifier ($12,500) would really look great on my equipment rack, and I could see myself living with the new DALI Epicon 6 Reference loudspeaker ($15,000/pair), with its unique Linear Drive Magnet system. I also thought, “Wouldn’t my wife just love the small KEF LS50s ($1500/pair) as the basis for her system in another room of the house?” (Heretofore, previous attempts to give my wife audio components as gifts have not been well received) 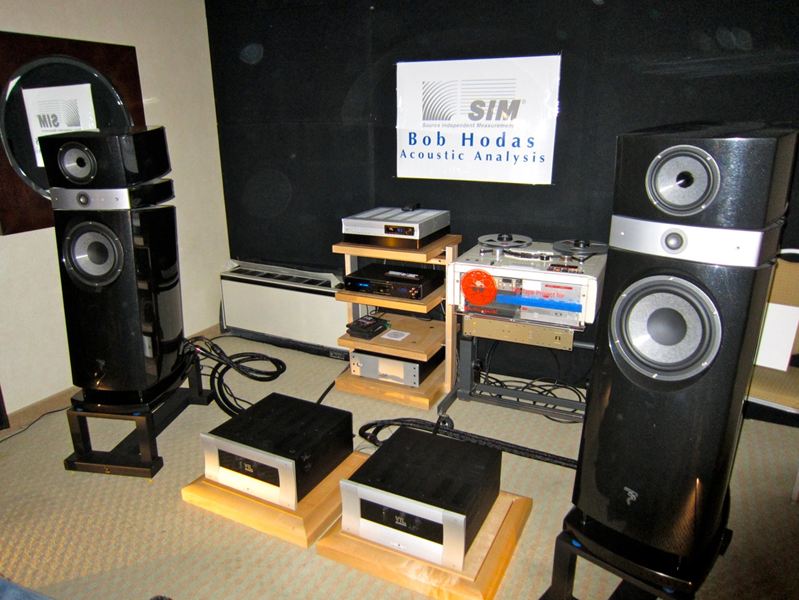 Several rooms that did not offer any U.S. product premieres produced compelling sound despite challenging conditions. One of the most outstanding was a small room upstairs that shouldn’t have worked as well as it did. Master acoustician Bob Hodas did his magic here, installing his custom isolation-wall, RPG Harmonix K diffusers, and Ikea rugs hung on coat racks (to control early-arrival reflections). As a result, the relatively large Focal Scala Utopias ($32,500), mounted on 10″ Sound Anchor stands ($1200), sounded incredibly lifelike and natural with beautiful timbres, extended highs, powerful dynamics, and low coloration. The sound was so good that I preferred it to that of Hodas’ fine room last year, in spite of the fact that Hodas was using smaller Focal speakers (Diablo Utopias) in 2011, which, I would have guessed, should have worked better in a room this size. The front-end was an Otari 1/2″ reel-to-reel tape deck along with some terrific Tape Project tapes, VTL’s 6.5 Signature linestage ($11,500) and 450 Signature Series III amplifiers ($18,000/pair), Tara Labs’ Onyx cables, and a Ground 1 Torus power conditioner. An Electrocompaniet DVD player handled digital playback chores. 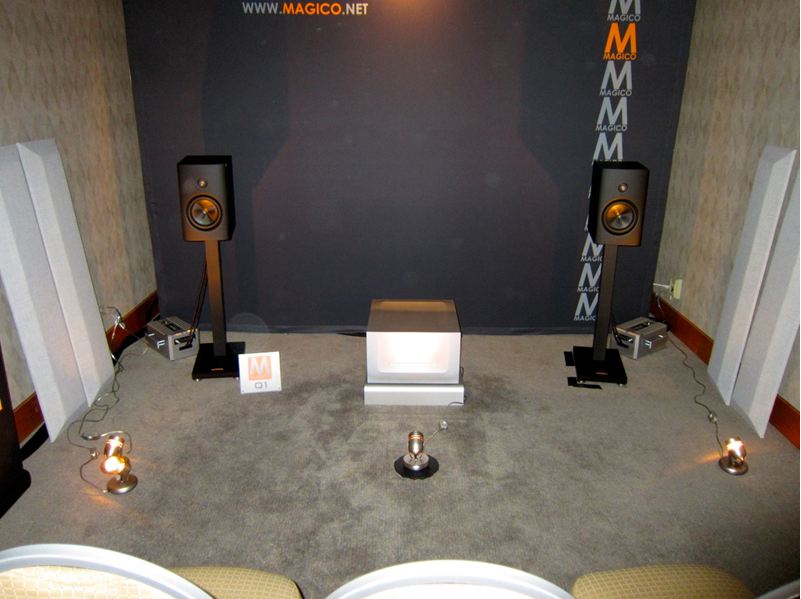 A few more of the smaller rooms were particularly noteworthy. Last year I found myself enthralled by the Magico Q1 loudspeakers ($26,500), and I was somewhat hesitant to audition them again at CAS since it took me the better part of 2012 to stop thinking about them. The good news (or perhaps bad news for me) is that they sounded even better this year in an even smaller, more acoustically challenging room! The Q1s seemed to lock in with the Constellation Virgo preamplifier ($19,000) and Centaur amplifier ($24,000), Auraliti’s L1000 Media Server ($4000) and DAC ($TBD), and MIT’s outstanding Oracle MA-X cables and interconnects. The end result was that the Q1 sounded even more transparent, dynamic, and focused with an astonishingly low noise floor and deeper and more controlled bass. I’ve been daydreaming about them again since the show. 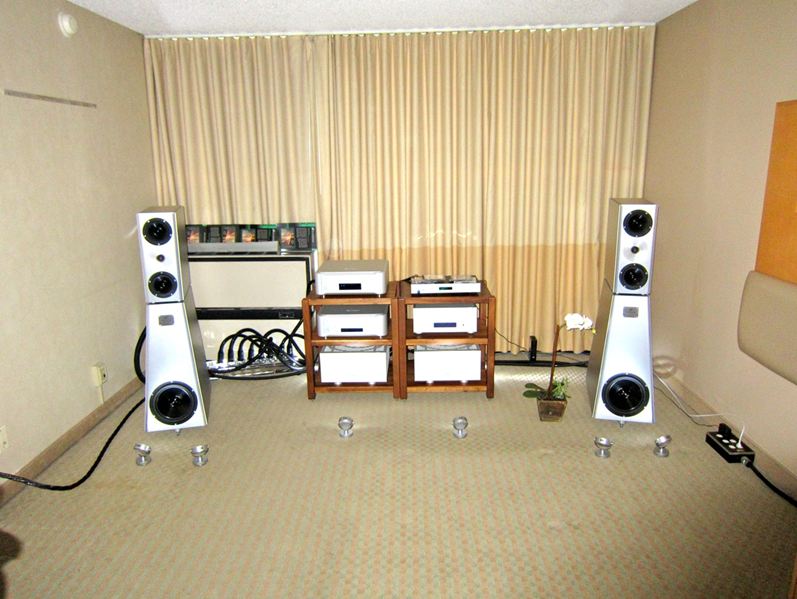 I would have guessed that the YG Acoustics Anat III Studio Signature loudspeakers ($82,000) would have overdriven the relatively small Loggie Audio room, but they did not. These speakers have transient speed to burn, which gives music a lot of impact and makes the percussion section sound thrilling. They have very quick bass and a lovely, natural timbre on brass instruments. Other components in the system included the Bryston BDP-1 music player ($2195), which I spotted in several rooms, the Esoteric P-02 digital transport ($23,500) and D-02 DAC ($23,500), and the Ypsilon Electronics PST-100 MkII and Aleius Hybrid amps, which seem to be the perfect match for the larger YGs. Unfortunately, I did not get to hear the smaller, more affordable Carmel in the same room.

As in Newport, the TAD CR1 speakers ($42,000) were driven by a Zesto Audio Leto preamplifier and a GamuT D200 power amp, connected with Wywires speaker cables, power products, and interconnects. A Merrill Williams R.E.A.L. 101 turntable, Tri-Planar U II tonearm, Dynavector XX2 MkII cartridge, and Zesto Audio Andros PS 1 phonostage ($3900) comprised the analog front-end, and the system was one of the most musically engaging I heard (at either show). Voices were lifelike and palpable, massed strings were silky and detailed, and overtones were extended and clear, so instruments sounded very natural. 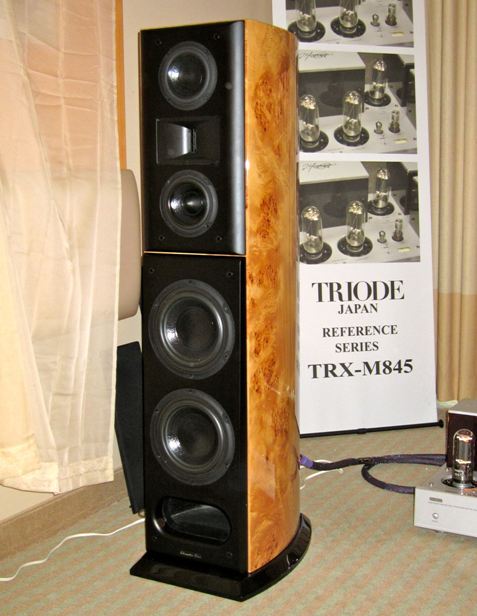 The Acoustic Zen Crescendo loudspeakers and Triode Company of Japan electronics combined to produce some of the most musically engaging sound at the show. Admittedly, the Crescendo speakers ($16,000) were able to bloom more in a larger room in Newport, but they gave quite a good accounting of themselves in one of the smaller hotel rooms upstairs in Burlingame when coupled with a Triode TRV-CD5E tube CD player ($2500), TRX-1 tube preamplifier ($3200), TRX-M845SE monoblocks ($22,500), and Acoustic Zen cables and interconnects. This system sounded so harmonically “right” with such immediacy and transparency that I could have listened far longer. In the scheme of things, it really delivered the goods at a relatively modest price. 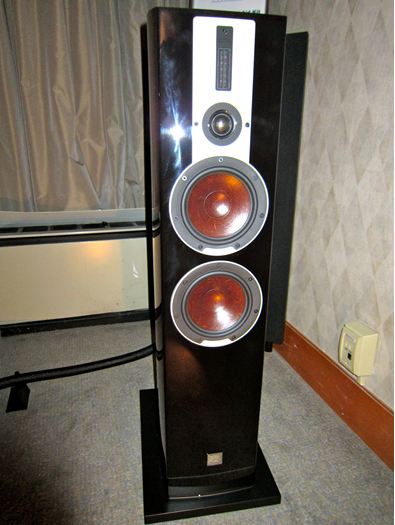 No matter where in the world I seem to hear them, MBL loudspeakers have an uncanny ability to reproduce fine detail, the leading edge of transients, and a wide and deep soundstage as well as any speaker. At the Munich Hi-Fi Show, MBL had the audacity to switch between a live performer playing a harpsichord and an all-MBL audio system, and the differences were much smaller than I thought they would be. In Burlingame, the lovely harpsichord instrument was not available for comparisons, but the mbl 101 E MkII loudspeakers ($70,500/pair) coupled with an mbl 1621 A CD transport ($28,000), mbl 1611 F D/A converter ($28,700), mbl 6010 D preamplifier ($26,500) and mbl 9011 power amplifier ($53,000), reproduced Carmina Burana with spooky 3-D imaging, delicacy in the massed strings, incredible transient speed and dynamic range, and some of the best highs I heard in one of those large rooms. I can see why one of my audio buddies covets these speakers so much. 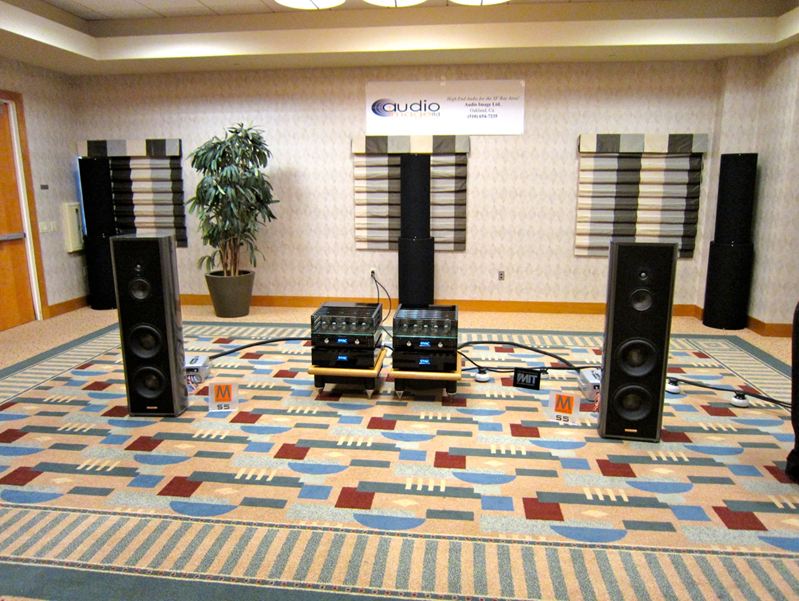 The Magico S-5 ($28,600), a new three-way with two 10″ Nano-Tec woofers, a 6″ midrange, and 1″ Beryllium tweeter, has a lot of sonic similarities to its amazing Q5 sibling but uses a cabinet with ½”-thick extruded aluminum walls (among other differences). This “cost-reduced Q5” mimics that reference speaker’s low noise floor, wonderful coherency and natural detail, full-range extension, and transient quickness. Admittedly I preferred the S-5 in Newport, in a more manageable room which allowed its high-end to soar, but in one of the Crowne Plaza’s large ballrooms, the S-5 was able to reproduce the orchestra’s massed strings with striking realism. The majestic VAC Statement 450 monoblocks ($78,000) supplied plenty of power and were coupled with a VAC Mk2a preamp ($19,500), Audio Research Reference Phono 2 SE ($12,995), Kronos ’table ($28,000) with Graham Phantom Supreme 12″ arm ($6000) and Clearaudio Goldfinger Statement cartridge ($15,000), Accuphase DP-700 SACD/CD player ($27,000), MIT Oracle Matrix SHD cabling, and more.

There were some real sonic surprises like the noticeable difference a new tube power supply made on the Brinkman Bardo turntable ($11,990) and the positive effect of Synergistic Research’s Tranquility Base(s) on a system comprising an Aesthetix Janus Signature preamplifier ($10,000), Romulus DAC/CD player ($11,990) Atlas monoblock amplifiers ($16,000/pair), and Vivid G2 loudspeakers ($49,990). The short form is that both of these “additions” are well worth auditioning.

The Absolute Sound Guide to Audio Electronics 2012 Released for Download