THE Show Newport continues to be one of the most significant audio tradeshows in the United States, with an increasing number of manufacturers demoing their wares. The Hotel Irvine was a step up from last year’s split venues at the Hilton and the Atrium hotels, and the rooms sounded quite a bit better to my ears. While attendance figures have not yet been published, judging by the long lines at registration (rivaling nearby Disneyland), attendance was also up.

Although many manufacturers of cables, power products, and accessories unveiled their new offerings at the recent Munich Show, several had their North American premiers at Newport. I applaud the increasing number of manufacturers who demonstrated the sonic impact of their products in live A/B demos. While this can be challenging and even risky for the manufacturers, it also helps keep skeptics quiet since they can hear for themselves the differences these products and accessories make. Some of these differences are dramatic while others are subtle.

Demos at THE Show also helped change my mind about a few types of products outside the scope of my assigned category. There were several sonically compelling systems featuring horn loudspeakers (generally not my cup of tea) that were among the best sounds of THE Show, including offerings from Acapella Audio Arts with its thrilling Atlas loudspeakers, High Water Sound with the amazingly coherent Eufrodite Ellipse+ speakers from Horning Hybrid Systems, USA Tube Audio Labs’ lifelike Tineo J Horn Speakers (driven by gorgeous looking and sounding Ayon electronics), and Avantgarde with its compact new Zero loudspeakers, among others. Class D amplifiers have also come of age and are not just for bass anymore, as the wonderful Aavik Acoustics U-300 unity amplifier and the power modules in the Piraeus Audio Athena loudspeakers demonstrated. 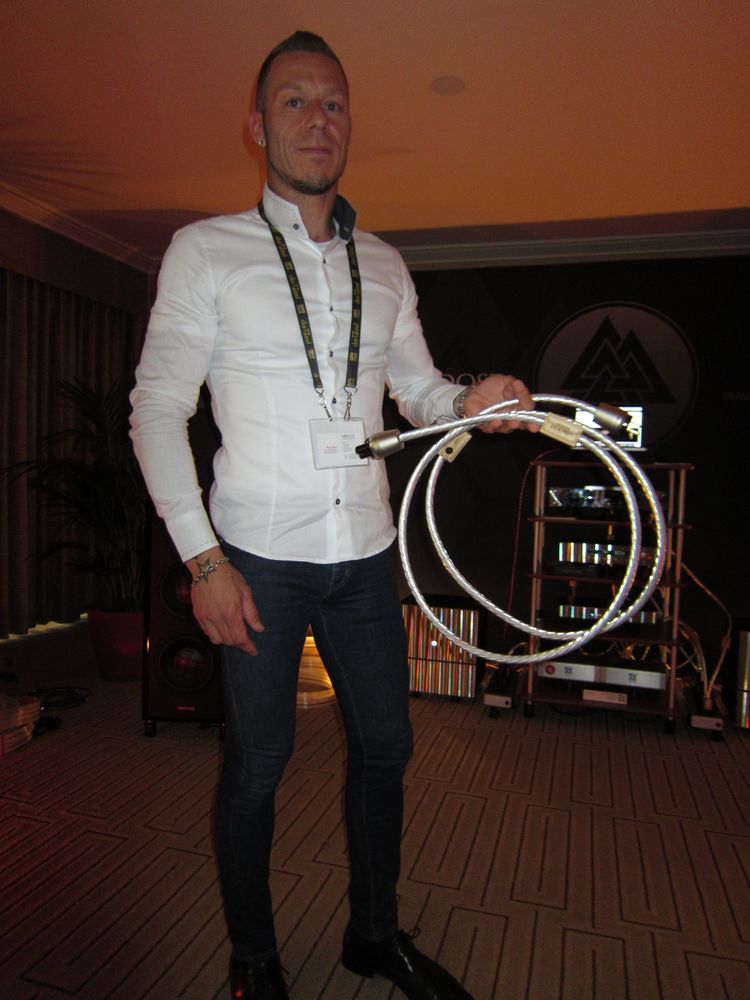 Nordost Odin 2
While these reference cables made their worldwide debut in Munich, their North American premier was in Newport. The Nordost Odin 2 family comprises analog, digital, and tonearm interconnects, as well as loudspeaker, bi-wire jumper, and power cables using Nordost’s dual monofilament technology. As always, Nordost does impressive comparison demos and at Newport, it A/B’d the Odin 2 with its predecessor, the original Odin that was introduced almost a decade ago. The Odin 2 is fully shielded up to and including its new HOLO:PLUG connectors, and sports a different geometry with improved mechanical design and resonance control, as well as two more conductors. Swapping out the Odin speaker cable with Odin 2 produced a more natural, lifelike sound with better bass extension and control, more explosive dynamics, and more soundstage dimensionality and fine detail retrieval. The Odin 2 interconnect and power cord achieved similar results when replacing their original Odin counterparts. 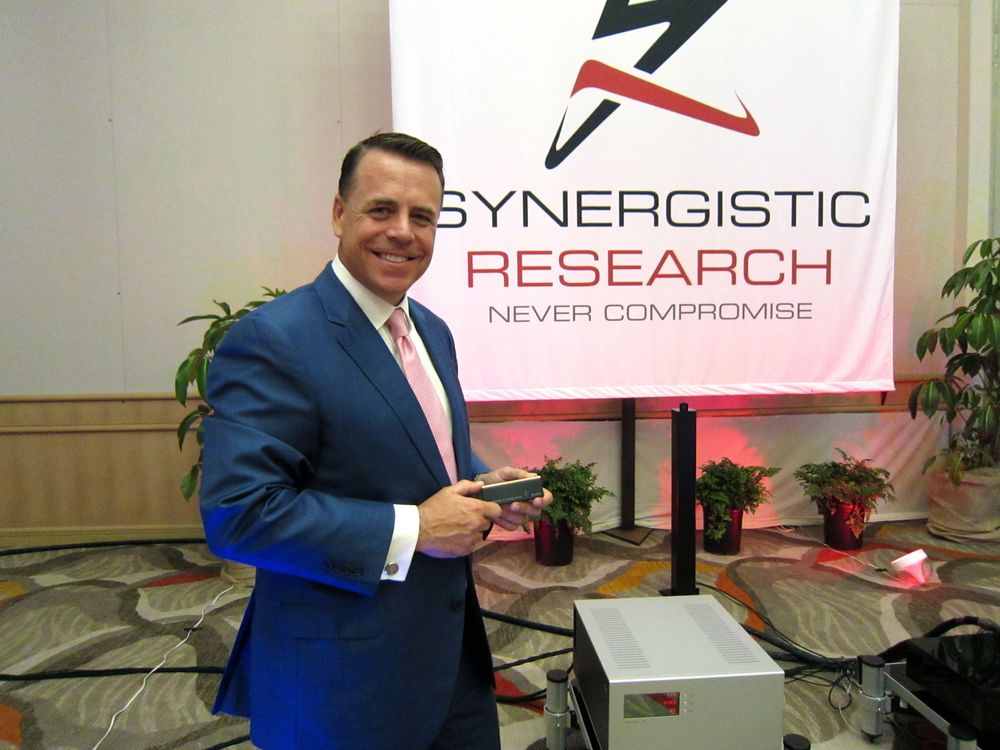 Synergistic Grounding Block, Black Box, HFT 2.0 and X
Ted Denney and his team at Synergistic Research always seem to introduce innovative products at tradeshows. At Newport, it was the SR Grounding Block ($595), a ground filter that lowers the noise floor of the entire system. It not only connects the built-in ground planes of SR’s Atmosphere Series cables and Tranquility Base products, but also accommodates any turntable ground or any component’s chassis ground. The Grounding Block accommodates up to 18 components, and optional ground wires are available from SR. In an A/B demo, with the Grounding Block in the system, there was less noise resulting in a far blacker background with more fine details emerging and more bass control. Using its Grounding Block, four Black Boxes (now in production), Atmosphere Level 4 Series cables and Acoustic Wave Generator, and a bevy of its new HFT 2.0s and X’s, Synergistic Research transformed the sound in a gigantic hotel ballroom into one of the best sounds of the show. The soundstage of the system in the tamed room was huge yet focused, the bass was extended and controlled, and the overall sound had lifelike, natural presence. When the Black Boxes, Grounding Block, and Atmosphere were removed, the sound was what one would expect in a huge ballroom—it was terrible! 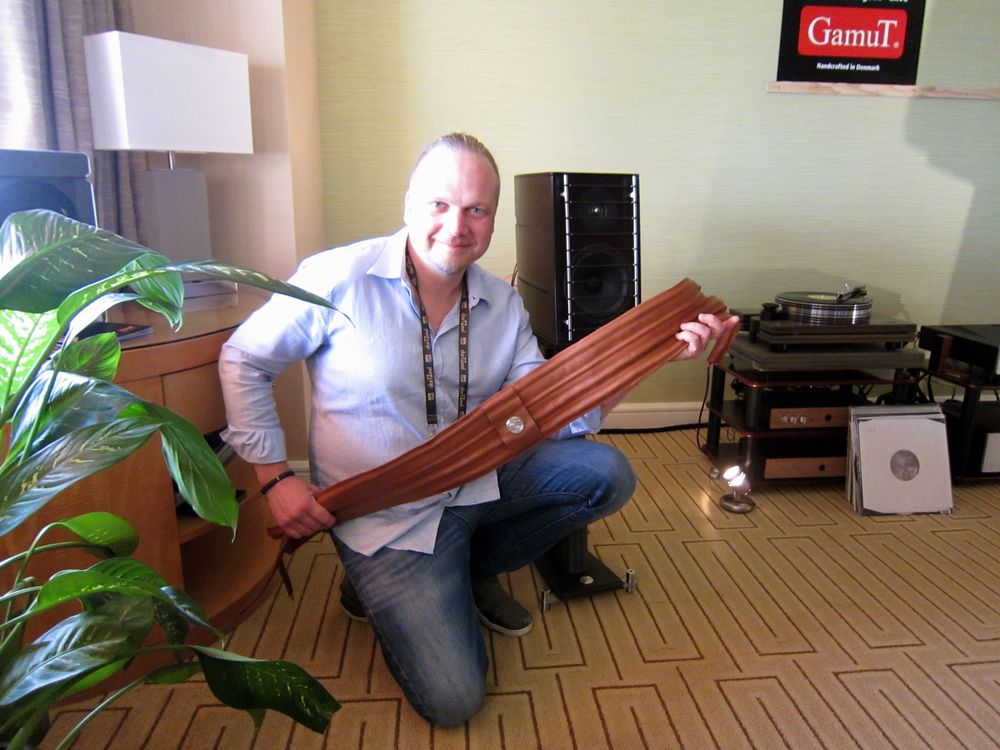 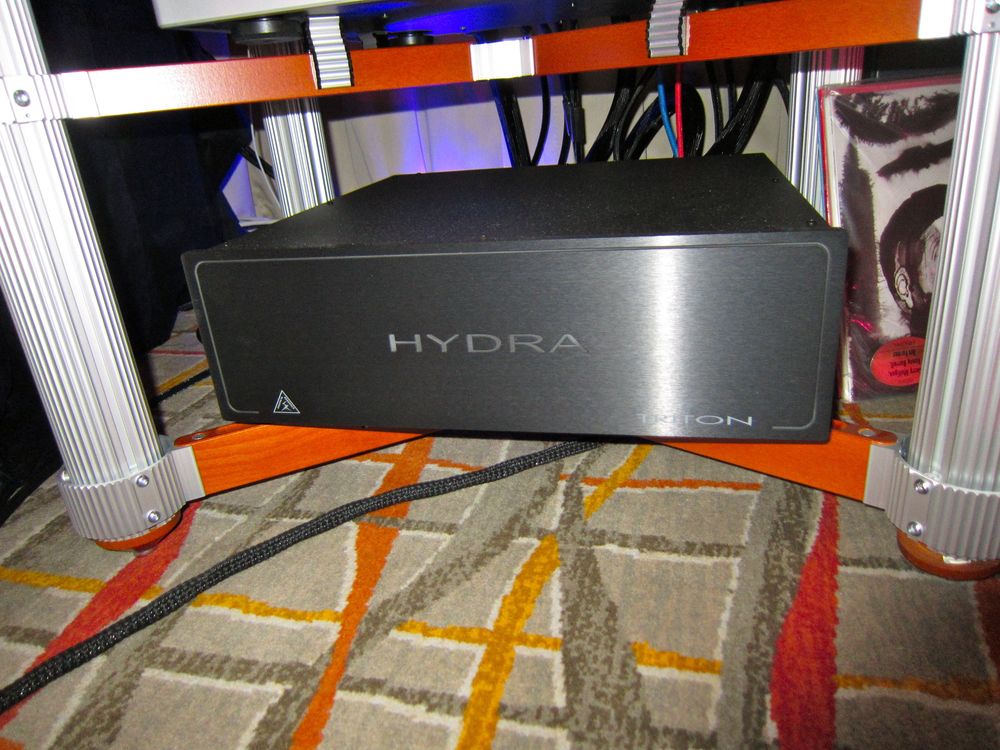 Shunyata Research Hydra Triton V2 Power Distributor
$6995
Shunyata Research Hydra Triton V2 is an upgraded version of the original Hydra Triton. With the exception of Shunyata’s patented noise isolation chambers, virtually all the other parts have been updated/upgraded. For example, the brass connector outlets have been replaced by copper ones; the filter networks have not only been doubled (over Version 1) but are also more sophisticated; the buss straps are now solid copper instead of brass; and the component ground system has four (4) grounding posts on the back panel. Although the Shunyata Triton V2 was not compared with the original during THE Show, it performed admirably in the system of distributor On A Higher Note, featuring Vivid Giya G3 speakers, a Luxman PD-171 turntable, and Luxman electronics and DAC. Tapes from the Tape Project on a Studer A80 reel-to-reel rounded out the system when vinyl wasn’t playing, along with Shunyata cables. The sound emanated from a jet-black background, allowing more fine details to emerge, and was very dynamic. This system was a contender for Best Sound of the Show. 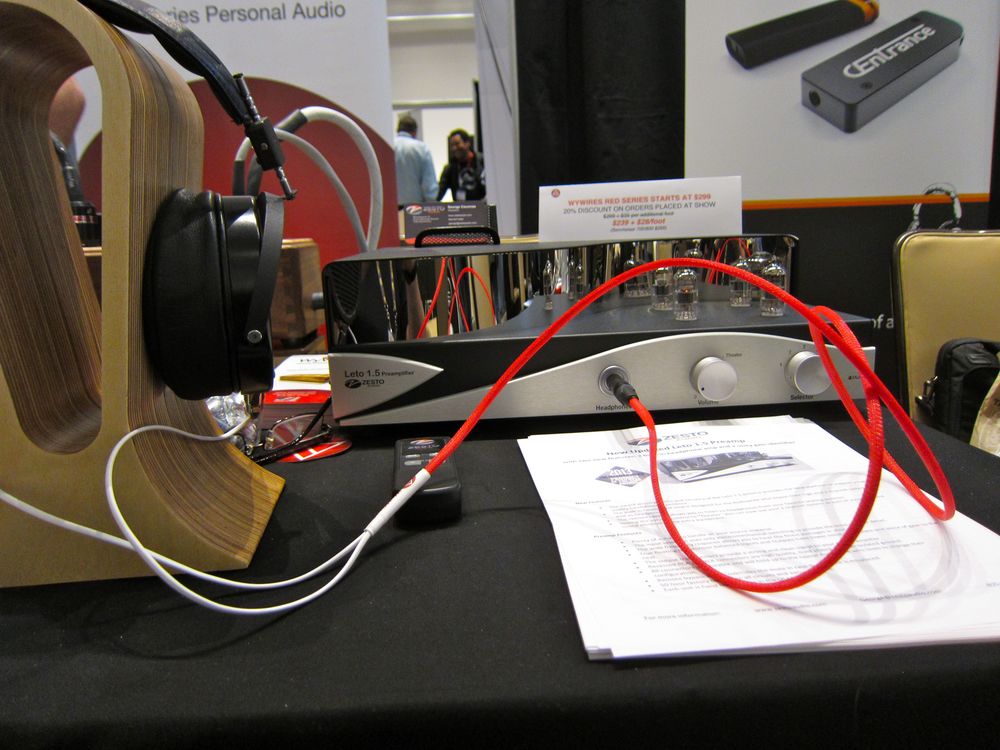 WyWires Red Series Headphone Cable
$299
WyWires premiered its new Red Series headphone cable using the gorgeous Zesto Leto 1.5 preamplifier. The Red Series had far better clarity, definition, and spaciousness than the stock cable in an A/B demo and sounded much more natural. WyWires also introduced its Diamond Series cables ($7999). These low-capacitance, low-inductance cables feature Litz wire and solid-core conductors, with eight separate conductor groups per channel. They are designed to sound neutral, fast and full-bodied and preserve the output of any amplifier to any speaker, regardless of the speaker’s load. 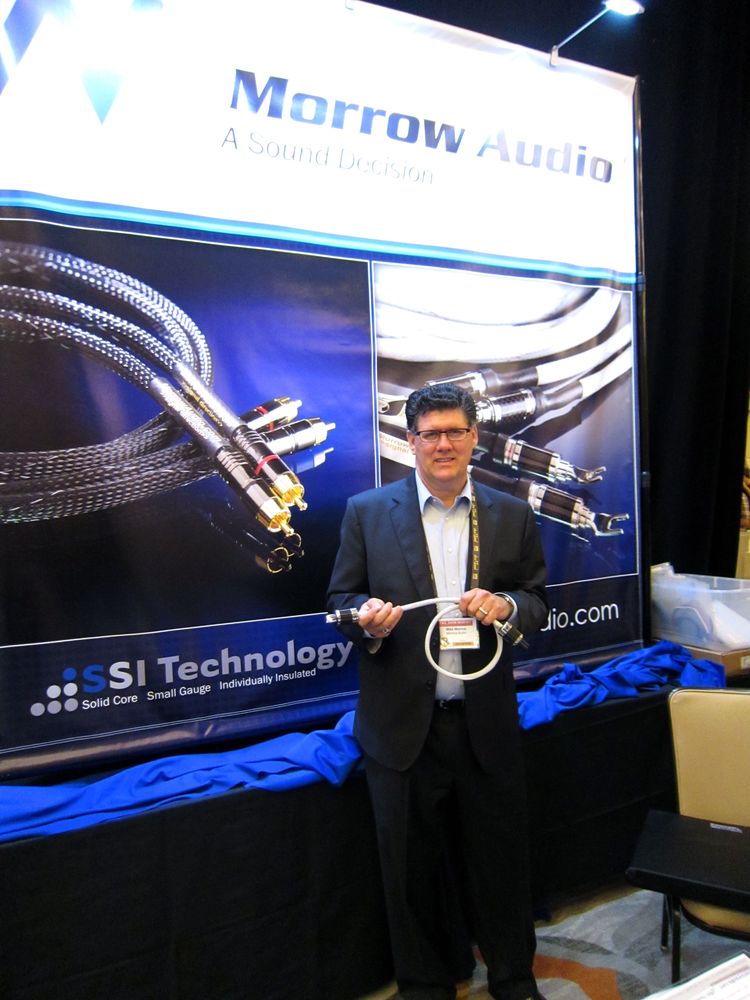 Morrow Audio introduced a new power cord, the Elite Grand Reference ($1899), to complement its line of solid-core, small-gauge, individually insulated cables. It claims to have a much lower noise floor and be more revealing and smoother than its predecessors. 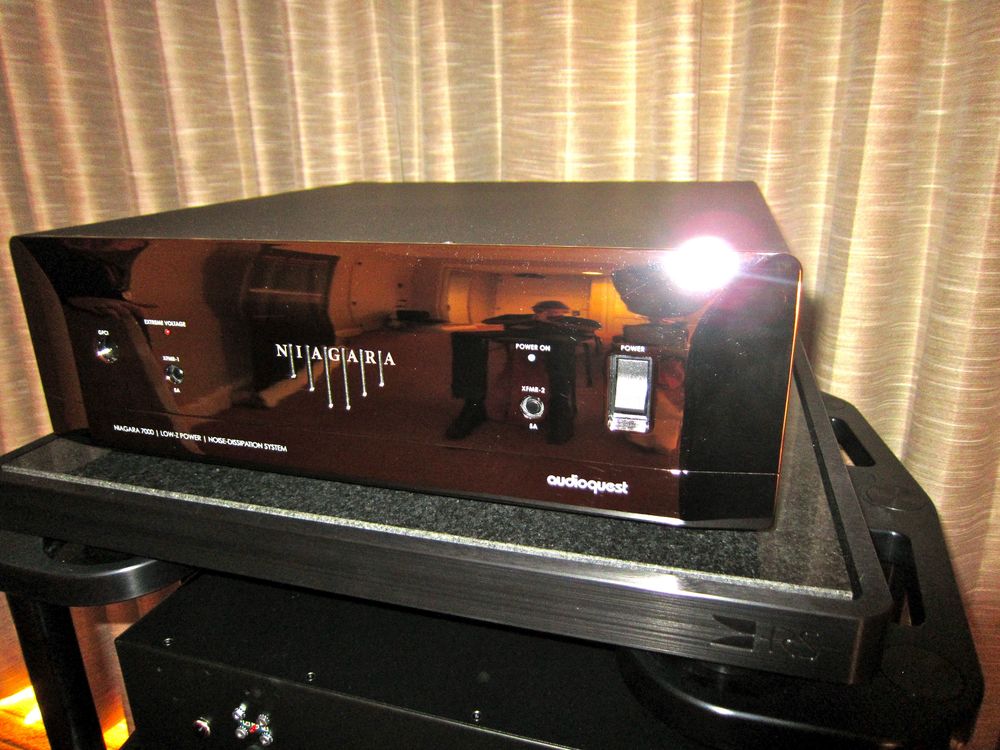 The AudioQuest Niagara 7000 Low-Z Power Noise-Dissipation System is getting closer to production. It features AQ’s patented AC Ground Noise-Dissipation System, Dielectric-Biased AC Isolation Transformers, and what AQ claims is the widest bandwidth-linerarized AC filter in the industry, as well as an instantaneous current reservoir of over 90 amps peak. AudioQuest will offer a scaled-down model (the Niagara 4000) at a lower price, too, as well as a line of other Niagara power products. In a live demo, the Niagara 7000 preserved dynamics while significantly lowering the noise floor. 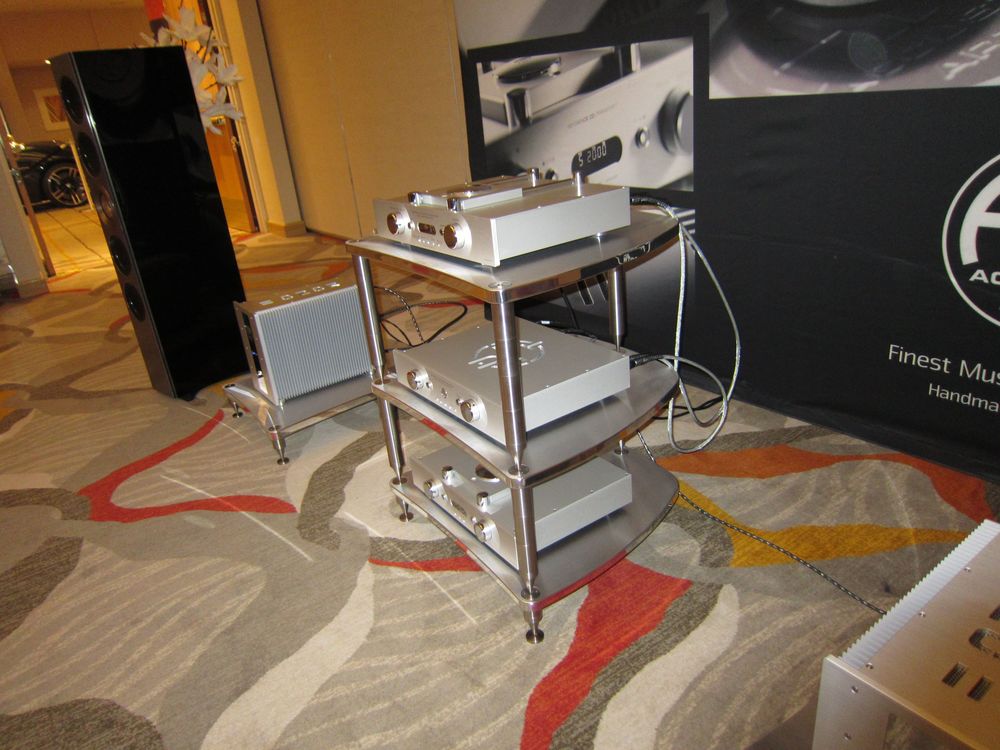 BBS Audio Racks from USA Tube Audio showcased its new stainless-steel modular racks and amp stands, which employ special “aviation grade” aluminum shelves, honey-combed on the undercarriage to help reduce vibration. They are available in “any color desired” and come with a lifetime warranty. 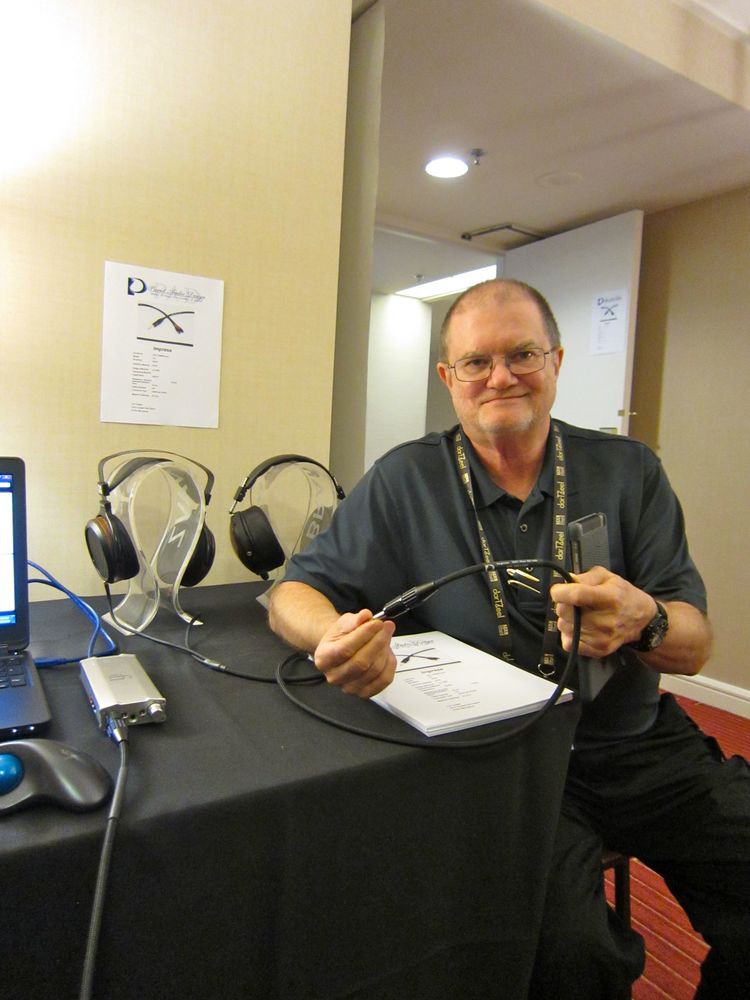 Purist Audio introduced its new flexible Impressa headphone cable ($680 to $800) that uses mechanical shielding and 21AWG conductors. It is currently available for the Audeze, HiFiMAN, and Sennheiser headphones. 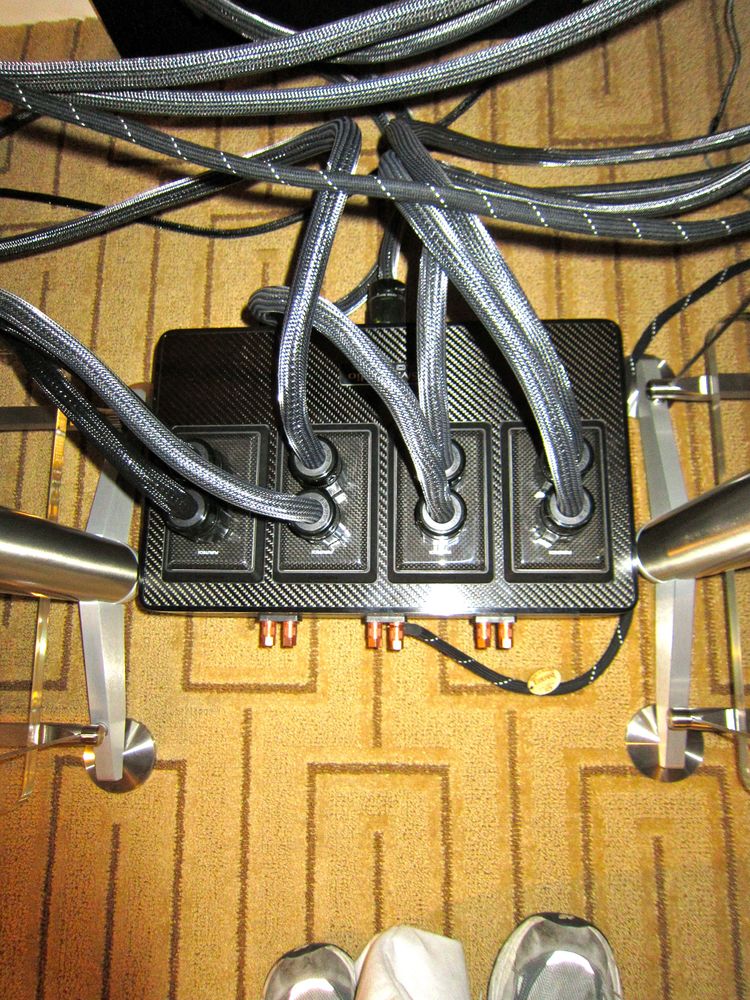 Outside of the category, the Ayon Audio room featured vocalist Ann Bisson singing along with one of her recordings played on an Oracle Delphi Mk6 Gen2 turntable system with Oracle SME 5 tonearm and Thalia HO moving coil through Ayon tube electronics into Tineo J Horn speakers. The reproduced voice on the recording sounded very close to the live event, making for a great performance and listening experience. 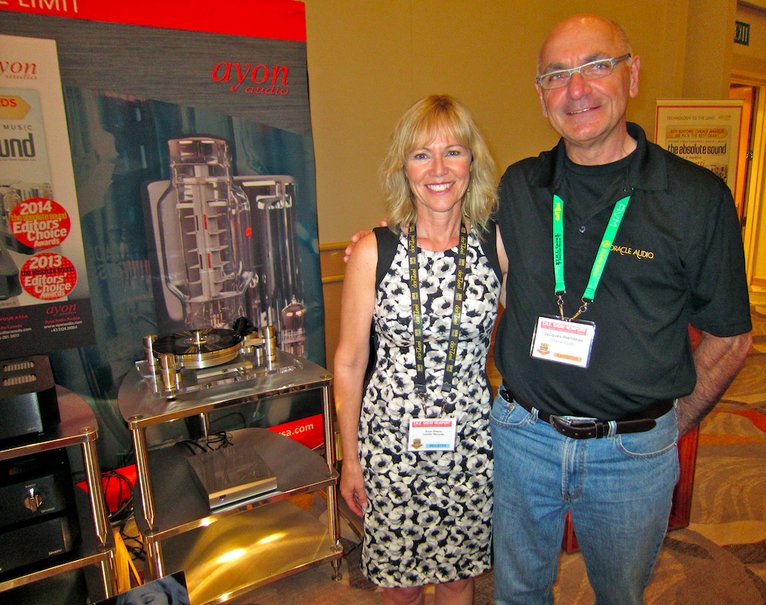 Kimber Kable brought one of its technicians to build cables at THE Show. It was very interesting and drew quite a crowd. XLO has reintroduced its line of cables with its UltraPlus, Signature 3, and Reference 3 lines. The massive Silver Circle Audio TCHAIK 6 power conditioner ($10,500) helped Highwater Sound achieve one of the best sounds of the show with the TW-Acustic 300B SE monoblock amplifiers producing completely natural, unstrained sound through the Horning Eufrodite Ellipse+ speakers. High Fidelity Cables was demonstrating its new solid core CT1 power cable ($2000). It is magnetically treated and has a new connector. Triangle Art was demonstrating its Rhea Reference power cord ($2995) in the Acapella Audio system. It uses 10-gauge solid-silver conductors with carbon-fiber shielding and plugs. Dana Cables introduced its new Ultra Summa speaker cables, which use 4-weave, 2AWG, individually sheathed conductors. They are naturally bi-wired and distributed exclusively by Gingko Audio worldwide. Dynamic Design introduced its Heritage Series cables ($2500 to $10,000) featuring its dynamic shielding to lower the system noise floor.

In non-cable news, a couple of low-profile companies deserve mention for their highly musical systems. Keith Herron has a habit of using speakers that are unavailable (either his own custom ones or in this case, the Audio Physic Avantis), but his Herron Audio electronics (tube phonostage and preamplifier, and solid-state monoblocks) are supremely musical. Cables and interconnects were from Audience. Musicality was also front-and-center in Steven Norber’s (formerly of Edge Electronics) PranaFidelity system, coupling its electronics with its floorstanding Vayu/fs speakers linked by Kubala-Sosna cables. The system had tremendous drive capability without overloading.

Best Sound (for the money): A tie between the very spacious and natural-sounding Magnepan system with three Maggie .7 speakers ($1400/pair) driven by Bryston electronics, and the Emerald Physics KC 11 open-baffle loudspeaker driven by an EP100.2SE 100Wpc hybrid digital amplifier.

Most Significant Product Introduction: The all-Kyron system ($112k including cables) features an open-baffle dipole speaker with a DSP crossover and room correction, and a separate electronics unit sporting six 1200-watt amplifiers. The presentation was very dynamic, open, and spacious with a lot of direct sound.

Most Coveted Product: The EnigmaAcoustics’ Sopranino add-on super tweeter in the Robyatt Audio room helped make the original Quads, restored by Electrostatic Solutions and driven by DNM electronics and cables, one of the best sounds at THE Show.