In Issue 189 I reviewed the Cable Research Lab Silver speaker cables and interconnects. A relatively new company at the time, CRL took its inspiration from the work of Paul Weitzel and Winston Ma over a decade ago for a company then known as FIM cables. CRL began producing a new generation of these wires, redesigned and manufactured by a team led by Art Almstead, president of Twisted Pair Designs. In my review I concluded that this midpriced cable touched all the right sonic bases and that it joined the ranks of some better-known competitors by exemplifying the quality expected in this price range. Since that time CRL has introduced a new, very expensive flagship cable, the Gold Series, but what intrigued me more was the debut of its Bronze Series cable. At $895, the Bronze is actually a package deal—or, in CRL’s word, a “bundle”—that includes a set of speaker cable, single or biwired with your choice of terminations, in lengths up to twelve feet, and two pairs of interconnects up to three meters in length, once again terminated with your choice of RCA or XLR connectors. All of this for one price. I thought to myself, “What savvy shopper doesn’t love a good bundle?” I know I do.

CRL Bronze speaker cables use four 14-gauge stranded OFC copper conductors individually insulated with modified PVC dielectrics—a departure from the solid-core conductors and more exotic dielectric and jacketing materials of the Silver. The Bronze interconnect is a silver/copper hybrid design in a braided configuration—hybrid, as in a pair of solid-core silver conductors in Teflon insulation and a single-stranded OFC copper conductor in polyethylene insulation. All CRL cables are hand-terminated and use lead-free Wonder Solder. They are all U.S.A. built. Bronze cable is lightweight for easy handling, a nice change from many of the thick, unwieldy wires currently available. 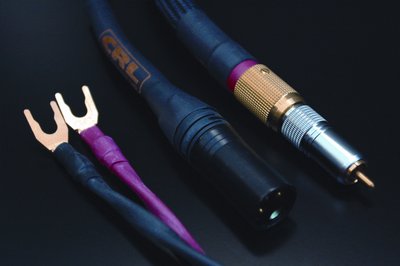 Sonically, the Bronze Bundle shares many of the characteristics of the uptown CRL Silver. There is a strong family resemblance in its rich, smooth, and dynamic midrange, and its low bass is extended and well-defined, though not as oil-drum-tight as it might be. A little cooler overall, its treble octaves integrate well with the rest of the frequency spectrum and on a track like Nils Lofgrens’ “Keith Don’t Go” from Acoustic Live, the wires exhibit substantial vocal air—although they do not have the openness and dimensionality of Synergistic Tesla Apex or the heavenly extension of Wireworld Platinum Eclipse, both vastly more expensive wires. In contrast, the Bronze has a whiter thinner treble texture that pinches harmonic resolution a hair. Very impressive, however, is the breadth of its soundstage during Stravinsky’s Pulchinella [Argo]. This LP authentically portrays the full palette of a chamber orchestra’s timbre and dynamic envelope like few that I own. The Bronze does an excellent job reproducing the rip and blat of trombones, splashes of brass and winds, the piercing whistle of a piccolo, the oboe’s nasality. On this disc image focus can be extraordinary, and though it’s very good here, the Bronze still gives up some definition and resolving power. Dynamics, for example, don’t have quite the same speed or delicacy. On the Lofgren cut, the microdynamic colors of his guitar are rainbow-like in their effect with stunning combinations of harmonics, string noise, bridge taps, and pick clatter. And though the Bronze can’t quite lay claim to all the articulation, transient speed, and resonance resident on this track, I don’t know of a combination of cables at this price point that’ll surpass it. My often-stated perspective is that the differences between reference-level wire and intelligently designed cables built to an affordable price point remain fairly subtle. Some reference-quality cables do have that inimitable quality of not being there—of leaving no fingerprints. With the Bronze, there is a slight but perceptible signature.

Readers often ask me where the value is in the high end. In the CRL Bronze, you’ll find an example. It’s a bundle that gives you more than an earful of what many cutting-edge cables are doing, without the price tag that comes with them.