The esteemed Bowers & Wilkins 800 Series loudspeakers need little introduction. Since their launch in 1998, the powerful 800/802 flagships with the famed Marlan head unit and top-mounted needle tweeter reside in living rooms worldwide as well as in iconic recording studios such as Abbey Road, Real World, and Skywalker Sound. Even today the 800s continue to sell vigorously. But in spite of the addition of a diamond tweeter five years ago, the 800 Series hasn’t changed appreciably since its debut. However, no company is immune to changing market forces, and the ascendancy of new high-tech speaker builders aggressively carving out market share at hitherto unheard of price points has inspired B&W to respond in a big way. The all-new lineup is called the 800 D3 Series, and it includes seven D3 models: four floorstanders, a single stand-mount, and a pair of home-theater center-channel models. Production began March 10 following a heady two-million-dollar factory overhaul. Models are now shipping, except for the 800 D3 (due in Q2 of 2016). 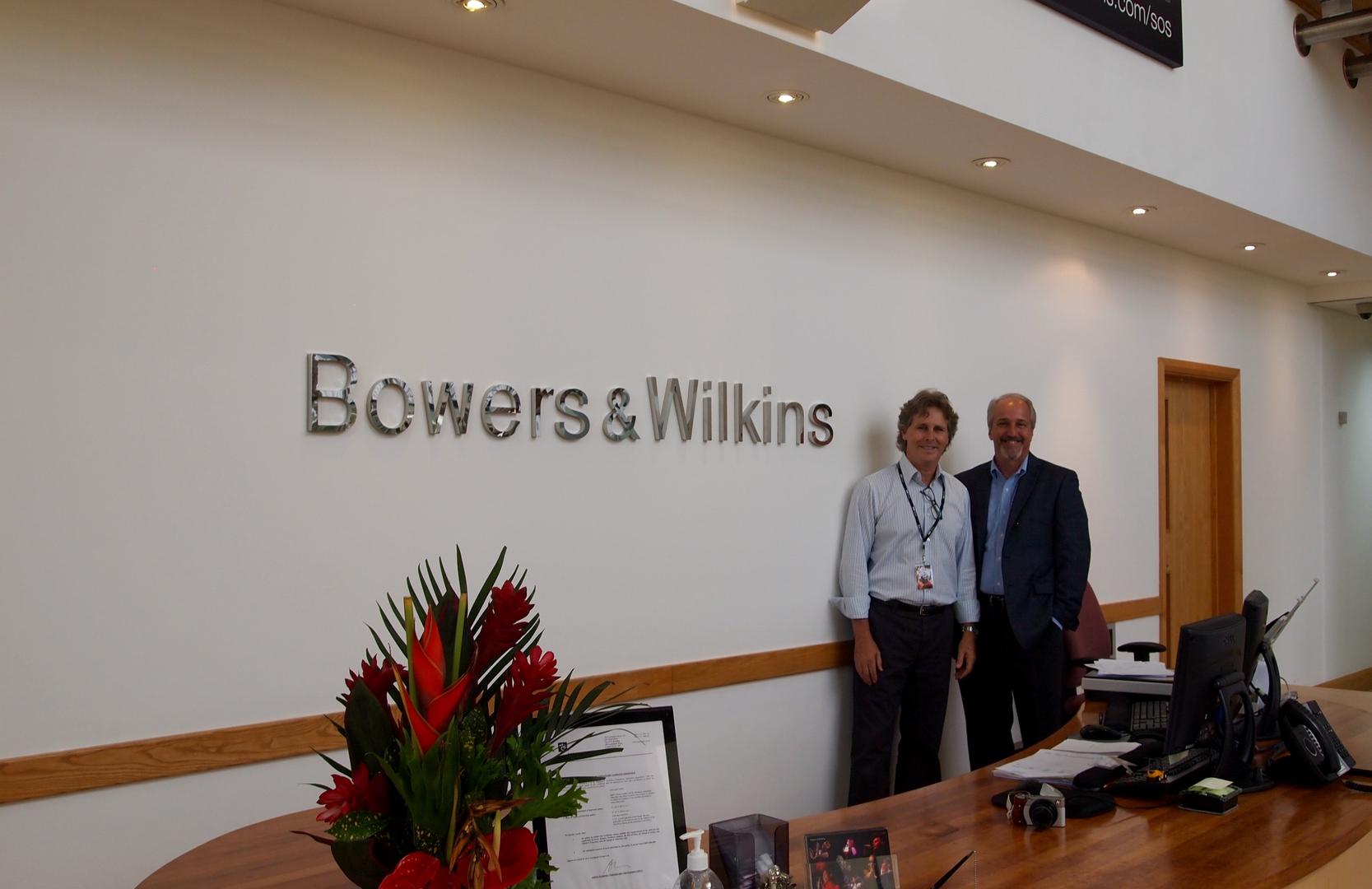 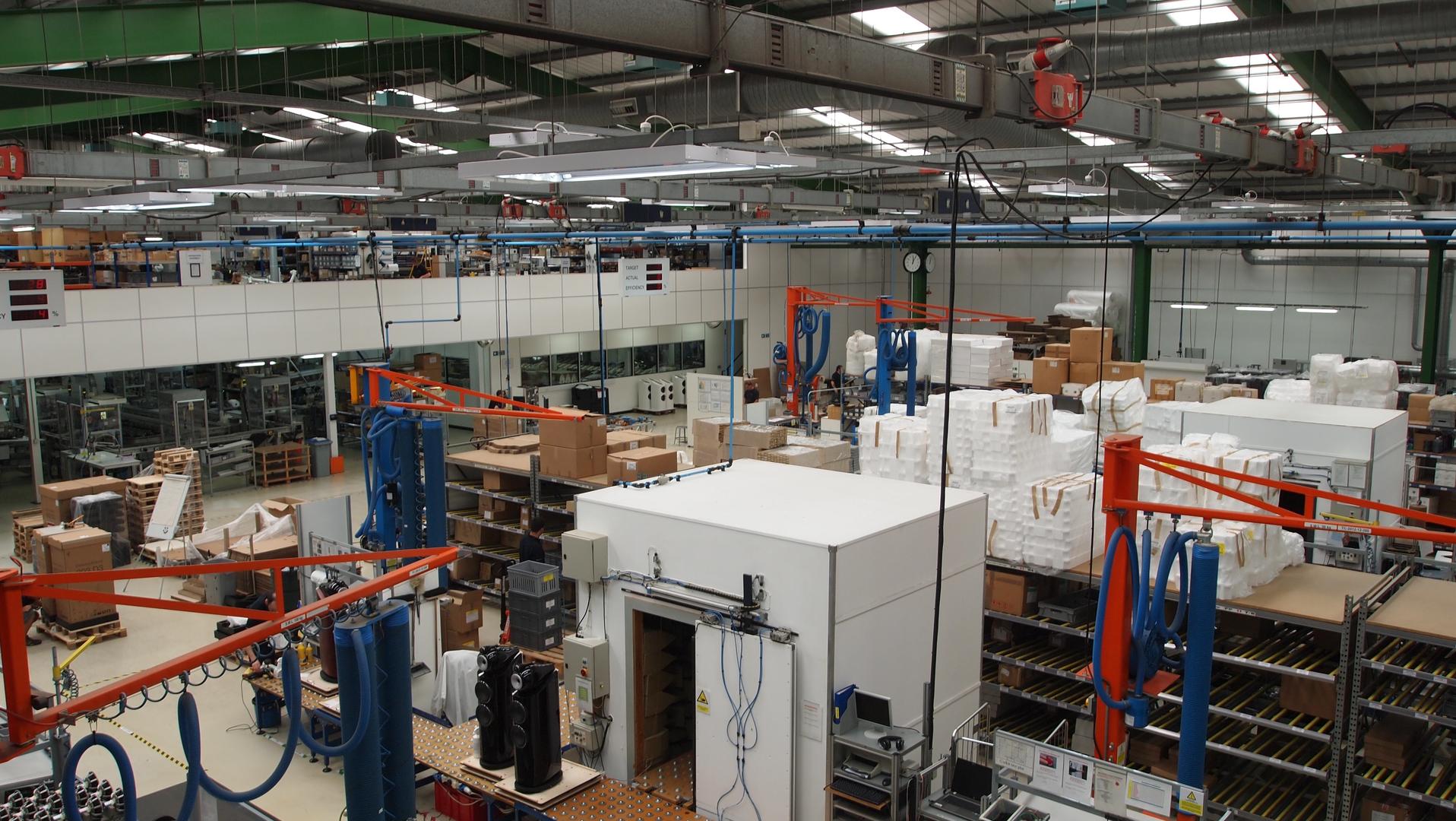 In August, I was invited to B&W headquarters in Worthing, England (a short ride from the picturesque seaside city of Brighton), for a factory tour and a special preview and listening session of the new 800 D3 line. Joining me at the factory to discuss the project were Doug Henderson, President B&W Group, North America; Andy Kerr, Senior Product Manager; and Martial Rousseau, Head of Research. Dave Ford, Head of Production, was my affable tour guide through the 135,000-square-foot factory, which currently employs 320 men and women. Production of the 800 Series is fully underway, and the woodworking shop is currently operating on a feverish 24/7 schedule. 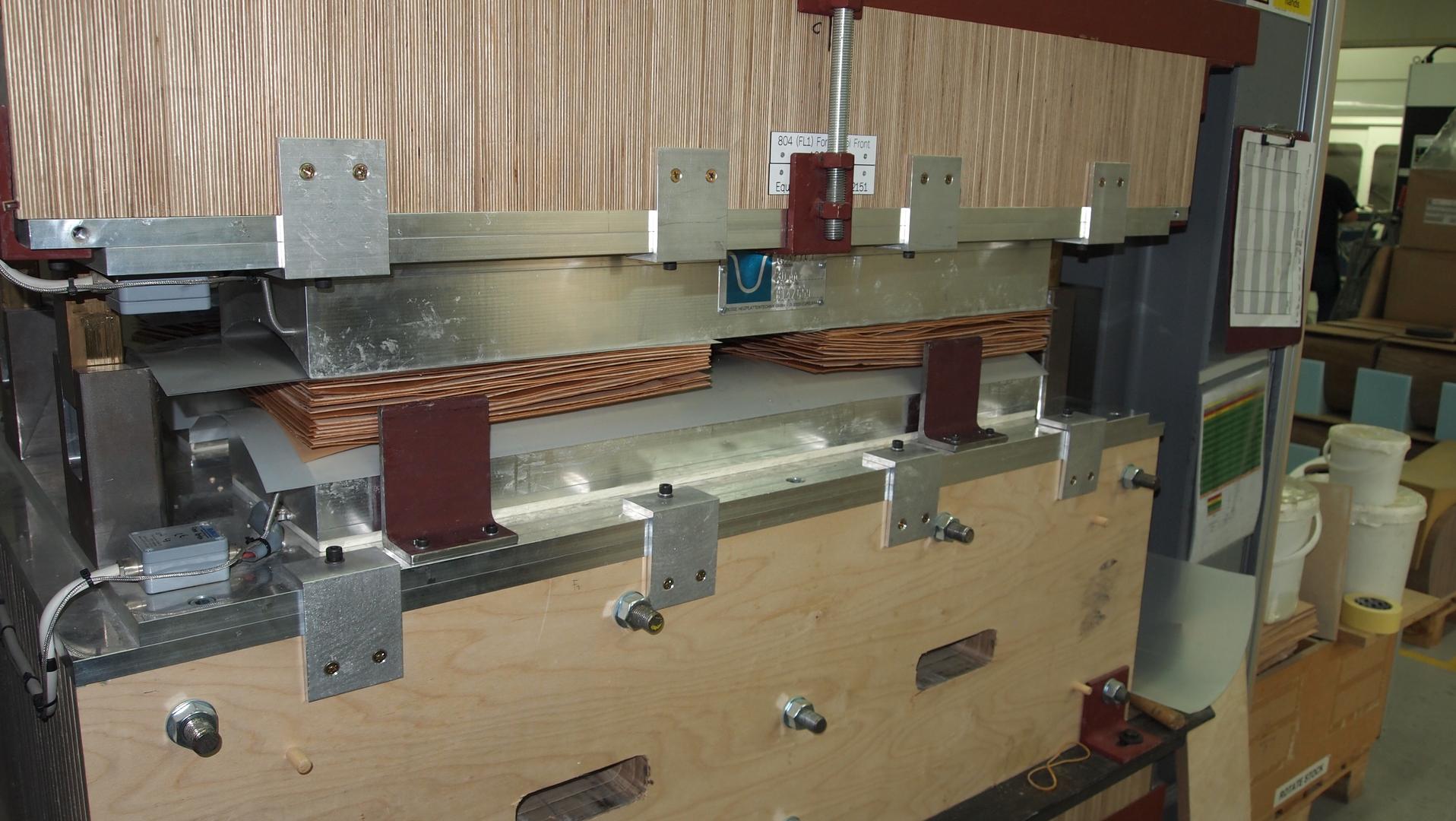 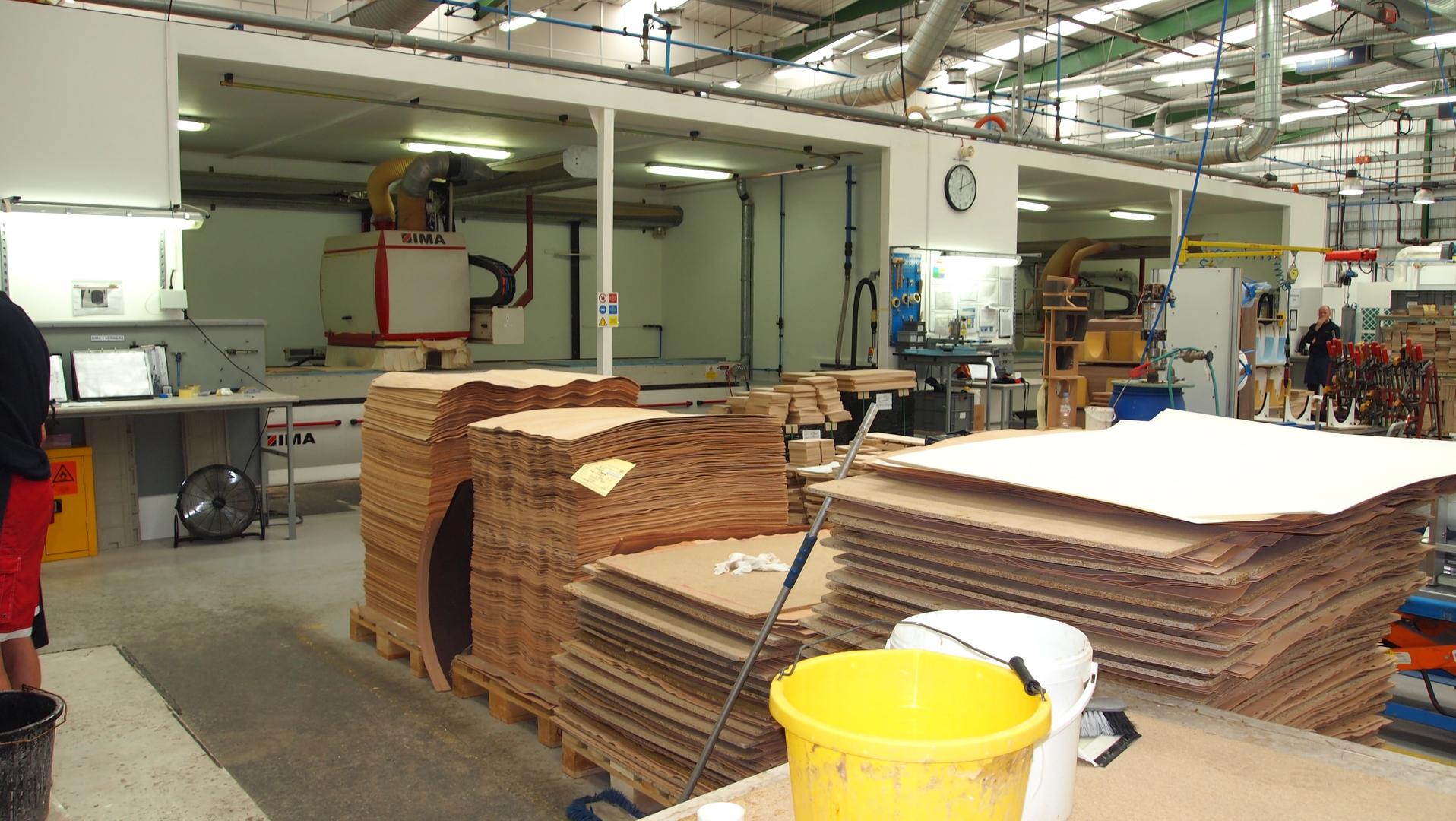 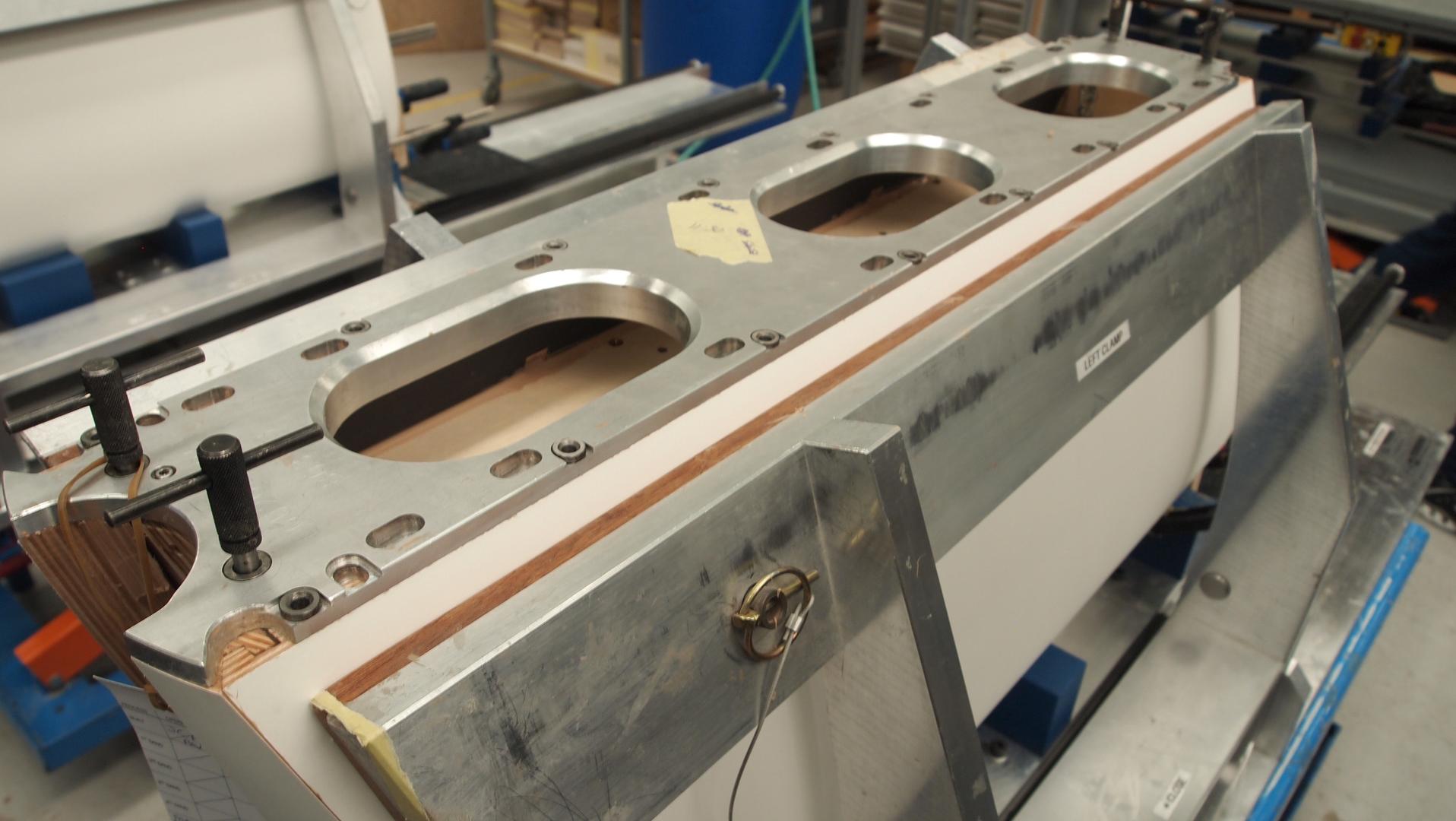 Clearly the B&W team is brimming with pride, and to my mind, justifiably so. The D3 Series is not the typical facelift or general overhaul. It is completely new, soup-to-nuts—even revolutionary, some would say. In fact, with the exception of the diamond tweeter and a handful of tiny parts, nothing from the previous generation has been carried over. Cabinet/plinth construction and internal bracing geometry and materials, head modules, transducers, and diaphragm material are all new. Visually each model is uniquely sumptuous, yet retains the DNA that identifies it as an 800 Series offering. All models are slimmer and smoother. The blocky chamfered edges of the floorstanders have transitioned into sensual, curvilinear shapes; the head modules are more shapely and acoustically integrate more effectively into the bass cabinets.

For B&W aficionados the most obvious visual difference is the absence of the yellow Kevlar drivers—B&W’s midrange-cone material since 1974. While Kevlar continues to measure well in motion and breakup, B&W has sought to take advantage of more advanced materials, using computer modeling and testing. It was a move not taken lightly by B&W. Bidding goodbye to a transducer that all but defines a flagship line provoked some heated discussion. However, the forces of new technology won the day, and the result is the Continuum cone. Initiated in 2007, the project took eight years of development and seventy iterations to arrive at a unique design. The technology is still hush-hush (in fact patent-pending), but simply stated it features a composite woven and treated cone material in a continuous cross-section to deliver optimal and controlled flexibility with very little breakup, no ringing, and ultra-quick settling time. As Senior Product Manager Andy Kerr points out, “Its behaviour (and advantages) are derived from what we have learned from Kevlar—although to be clear there is no Kevlar involved in it anywhere. It simply does everything better.” There’s a new bass cone as well—dubbed Aerofoil—it sports a unique geometry made possible from a cone composition of a synthetic foam core and carbon skins to yield greater stiffness, more control, and improved pistonic behavior. 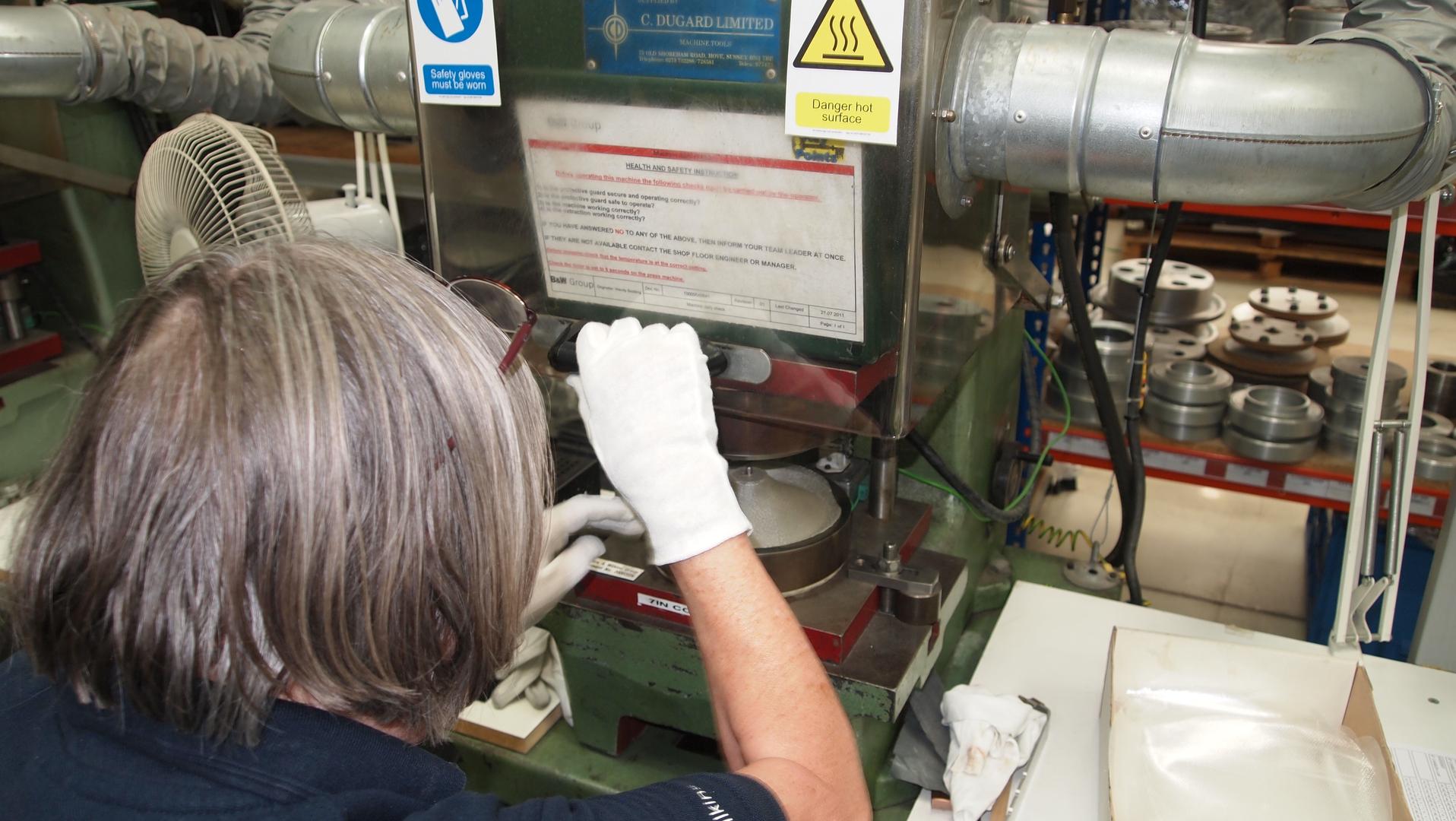 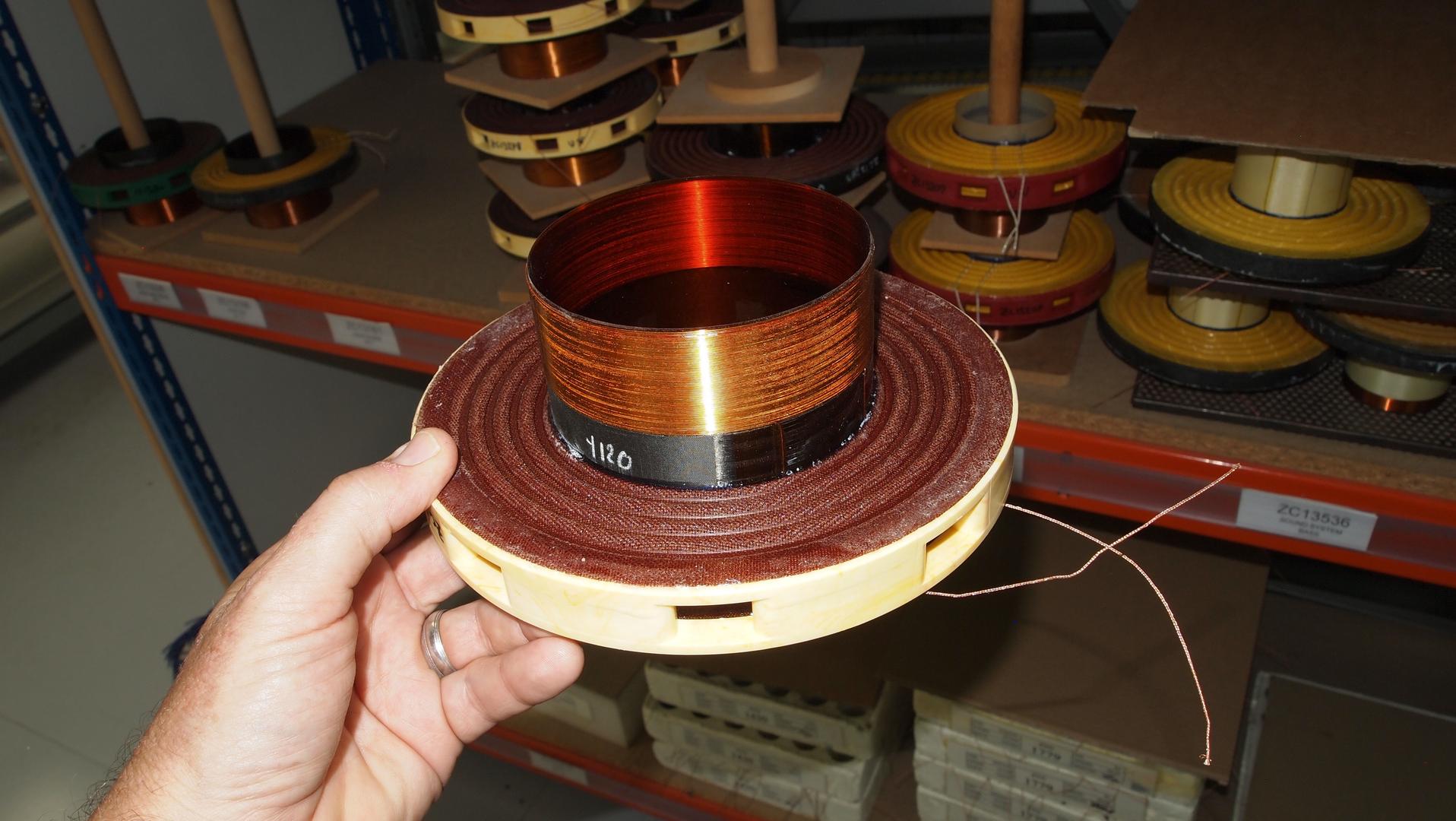 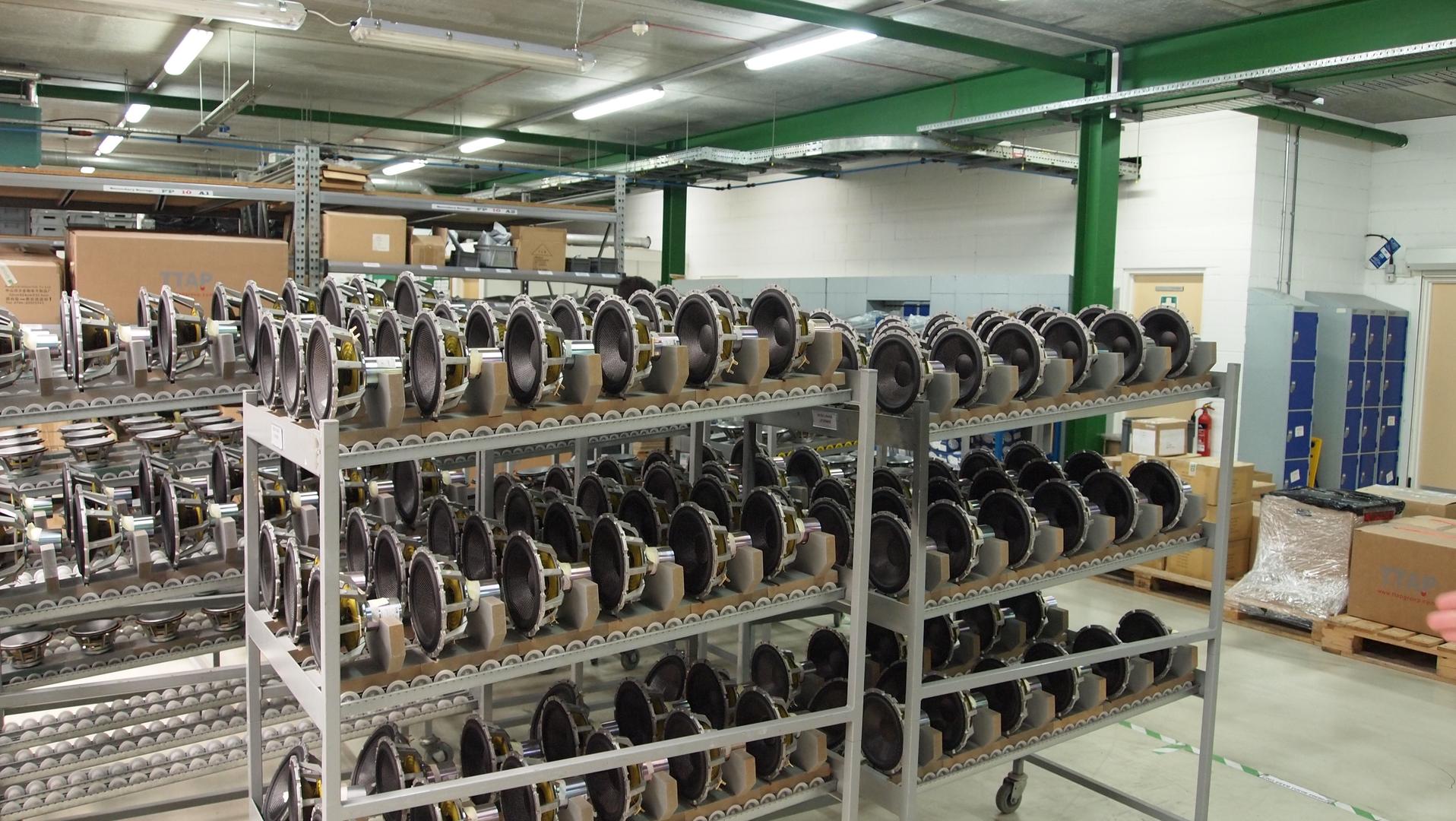 Replacing the similarly iconic Marlan head is the sleeker Turbine head design. B&W engineers used 3D printing to create the prototype, and the result is an aluminum structure reinforced with more radial interior ribs that is slightly smaller but much stiffer and heavier (37 pounds) than its predecessor. Formerly made from zinc, the tweeter housing is now milled from a single aluminum billet, which makes for what is essentially a massive heatsink for the diamond tweeter motor. And again, like the Turbine head, it is much more inert, which hugely reduces ringing. During the orientation I was shown 3D perspectives in the form of laser vibrometer animations of cone motion behavior—Kevlar versus Continuum—and finite element analysis depicting mechanical resonance behavior from the enclosures and drive units. The measurable superiority of the new 800 series was of such magnitude that it hardly bears discussion. 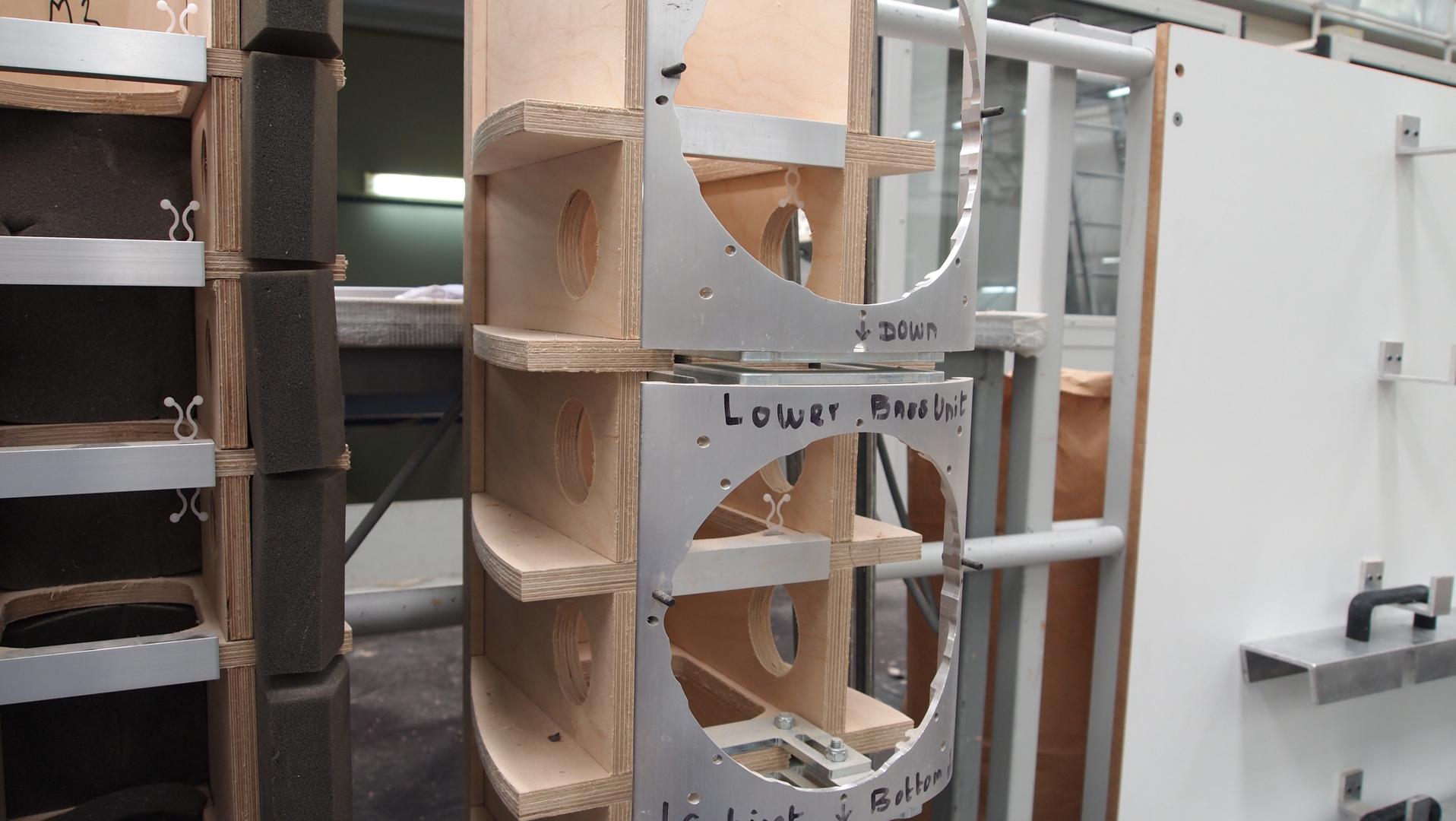 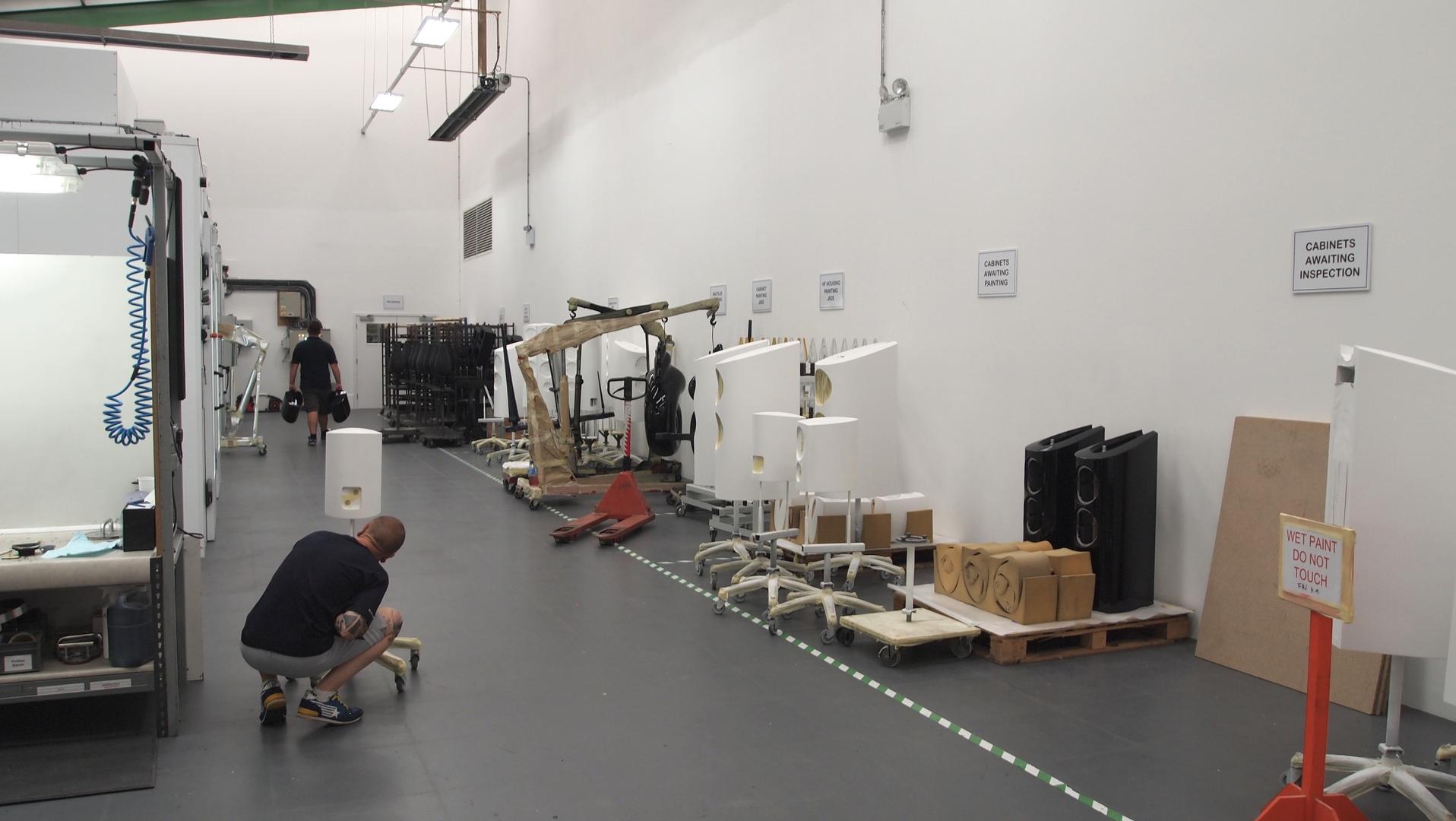 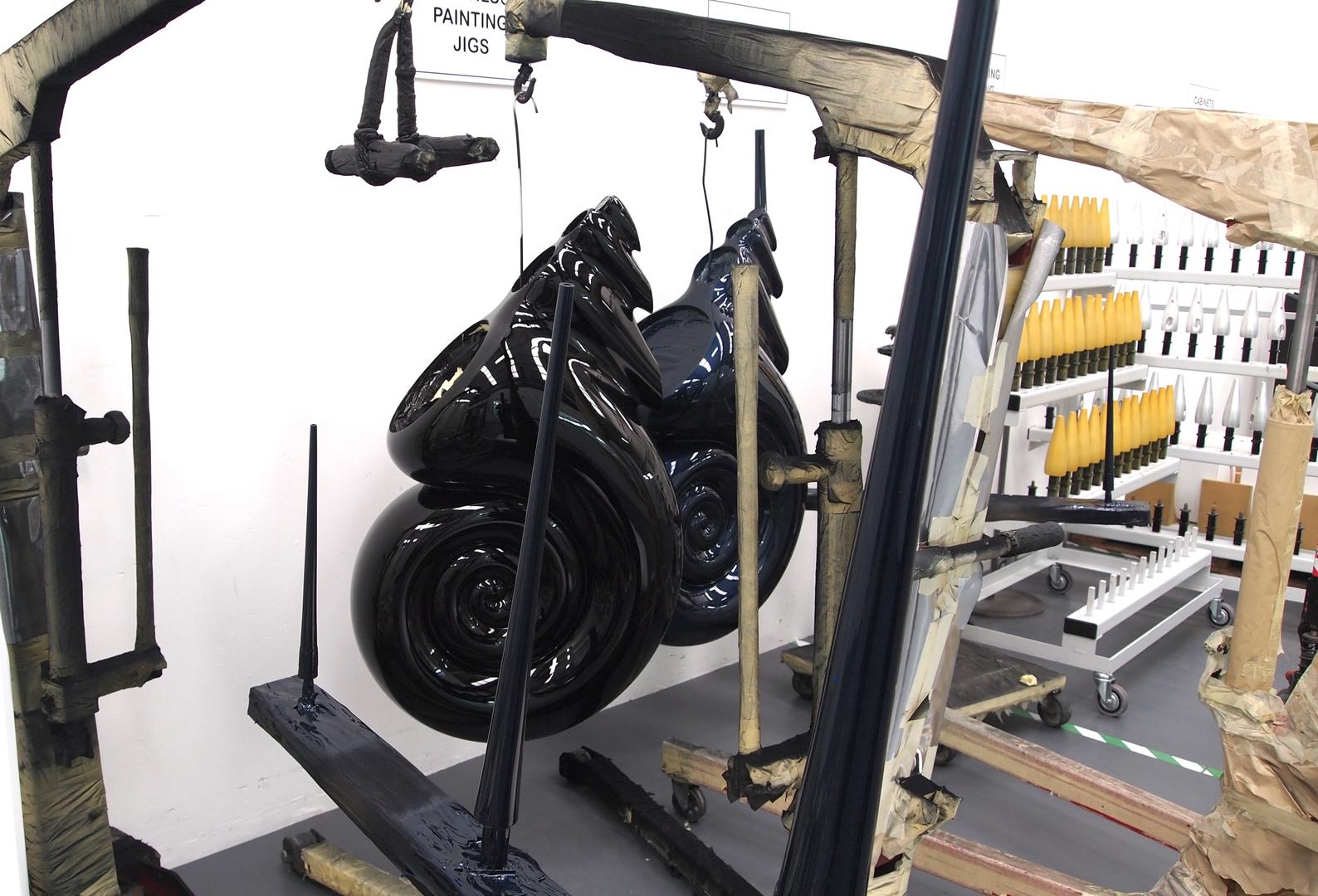 The major development for the cabinet is the “the reverse wrap”—a continuous curved front, held together with a spine of solid aluminum. The new design eliminates the front chamfers and the acoustic collaring that supported the old midrange head unit. The top portion of the enclosure now follows the slimmer, sleeker shape of the Turbine. As a result, the surface area of the cabinet is greatly reduced and measurable diffraction minimized. In a major shift, B&W switched from MDF to birch ply for the walls and bracing. Thicknesses were doubled inside to create a simplified, but vastly more rigid internal matrix. On the larger floorstanders, the engineers also added a complex aluminum reinforcement structure across the baffle to achieve further stiffness and minimize resonances. This “exo-skeleton” accounts for an overall 25 percent increase in weight on these models. The crossover location was also changed. It used to be housed in the plinth but has now been moved against the heavy aluminum back panel, which acts as a heatsink. This update has permitted a new solid-aluminum plinth design which is not only more stable but less resonant.

Listening at the SRE
My final stop was a tour, followed by listening session at the SRE (Steyning Research Establishment), a short drive from the factory. Established by John Bowers, this is the cutting-edge facility that has driven the company’s most innovative technologies, which include groundbreaking designs like 1993’s iconic Nautilus, the Kevlar cone development, and the Matrix cabinet with its interlocking grid of internal bracing. Here, at this outwardly nondescript facility, engineers have countless tools at their disposal—computer simulation, laser Doppler vibrometer, finite element analysis, virtual prototyping, and 3D printing and testing. It’s also worth noting that Steyning’s mission is pure research rather than day-to-day project work. From B&W flagships to the modest Zeppelin, Steyning is where projects are conceived, engineered, and brought to life. SRE currently employs 35 people, and as is the case when any “skunkworks” secrecy is required of every worker. 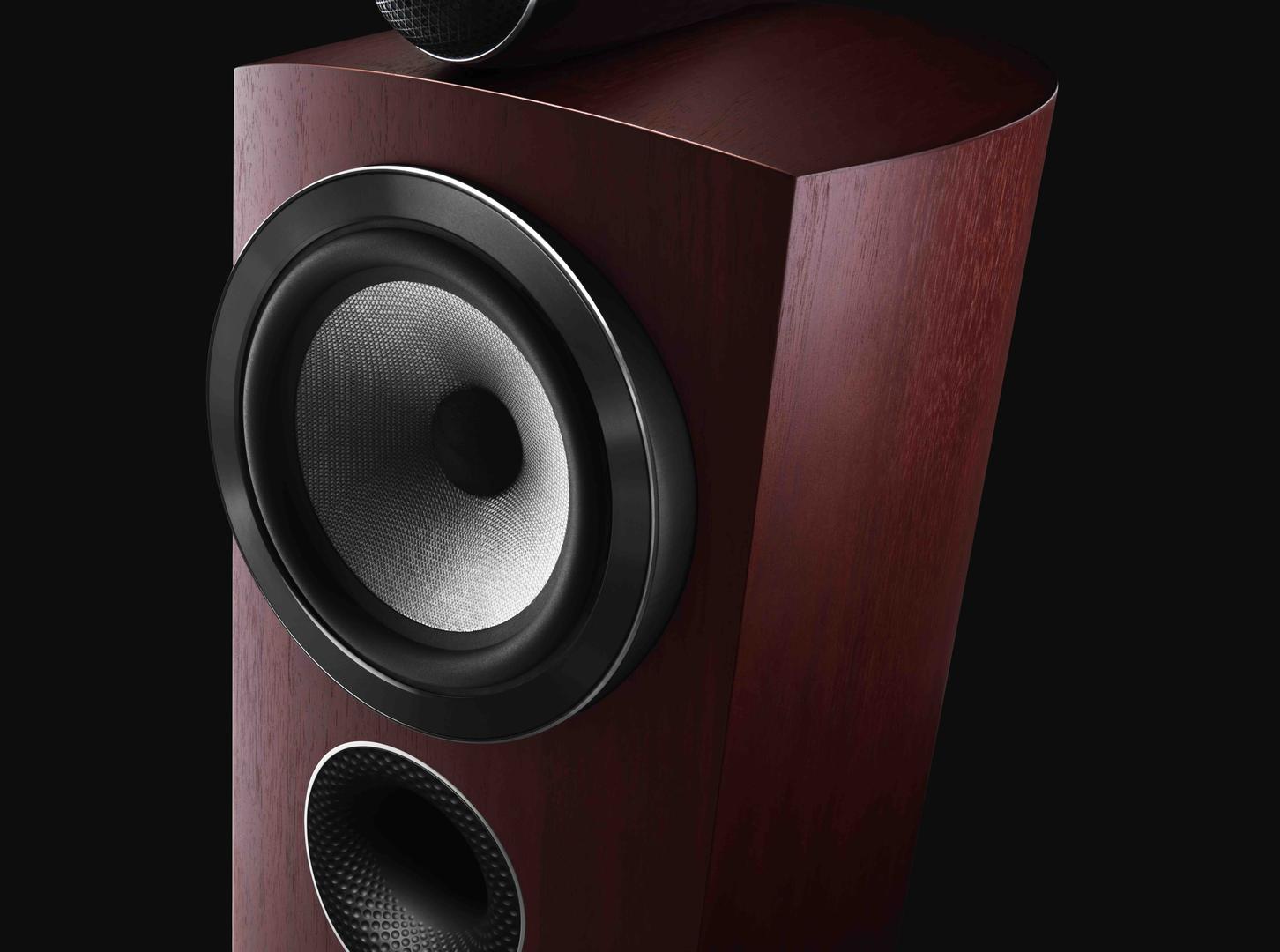 The Steyning listening room, though modest in appearance, is ripe with lineage and exists today pretty much as it did in the John Bowers era. Powering the system were Rotel electronics. Sources were courtesy of MSB and Esoteric. First up was the current 805D Kevlar-driver two-way, followed by its successor, the 805 D3. While there were basic sonic similarities—clearly B&W hasn’t tossed the baby out with the bathwater—the D3 version is a cleaner, smoother, and better-defined performer. Soundstage, particularly, is more fully realized, and the stiffer cabinet better focuses midbass information. The 805 D3 conveys an entirely different sense of expansive space and dimension. Its predecessor, by comparison, seemed just a little softer and more muddled, lacking the dynamic snap of the new D3. 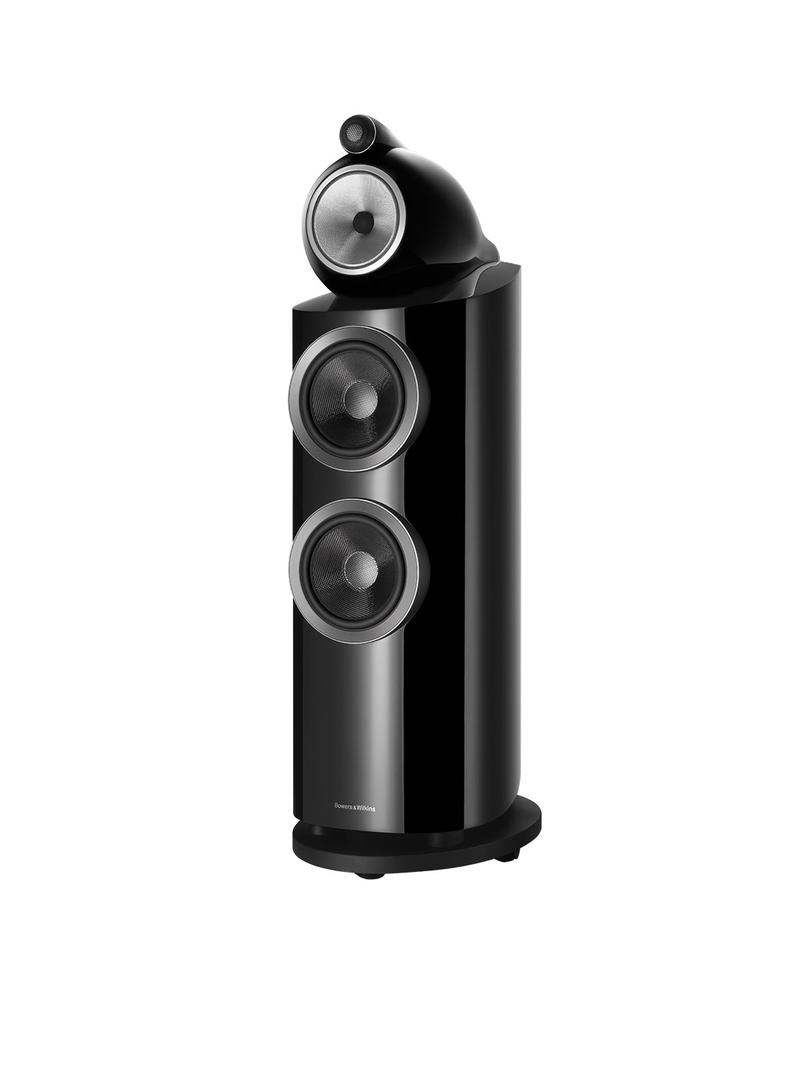 Next up were the floorstanders, the three-way 804 D3 followed by the mid-size 803 D3—the first model that uses a version of the Turbine midrange—and finally the much larger 802 D3 with the full-scale Turbine head—and second only to the mega 800 D3 equipped with larger twin-woofers. On Mozart piano sonatas [Pogorelich, DG] and Peggy Lee’s “Fever,” among others, two general things stood out for me. The first was how consistent the voicing was from speaker to speaker, and the second was the excellent inter-driver coherence. The diamond tweeter was virtually invisible in its openness and freedom from artifacts on even the most intense piano crescendos. From the 805 right up to the 802, there was a full, rich midrange supported by a weighty lower mid/upper bass foundation—a sound that drew me in like a tractor beam. Predictably, the larger versions add bass extension and output and dynamics, but the overall message remains balance and rock-solid consistency. On the Mozart the tonal and timbral qualities remained stunningly constant as our session ascended through the line. What changed were the amount of soundboard resonance, the dynamic envelope, which widened and intensified during mezzo forte passages, and the weight and bass extension that rippled through the room. As I mentioned to our hosts, who seemed to nod in approval, “What I’m hearing is basically the difference between pianos: a console, a baby grand, and a concert grand.” The piano never sounded less than authentic, but was proportional to each loudspeaker. Early personal favorites were the stand-mount 805 D3 and the smaller-head floorstanding 803 D3. I hope to have at least one of them in my listening room very soon. 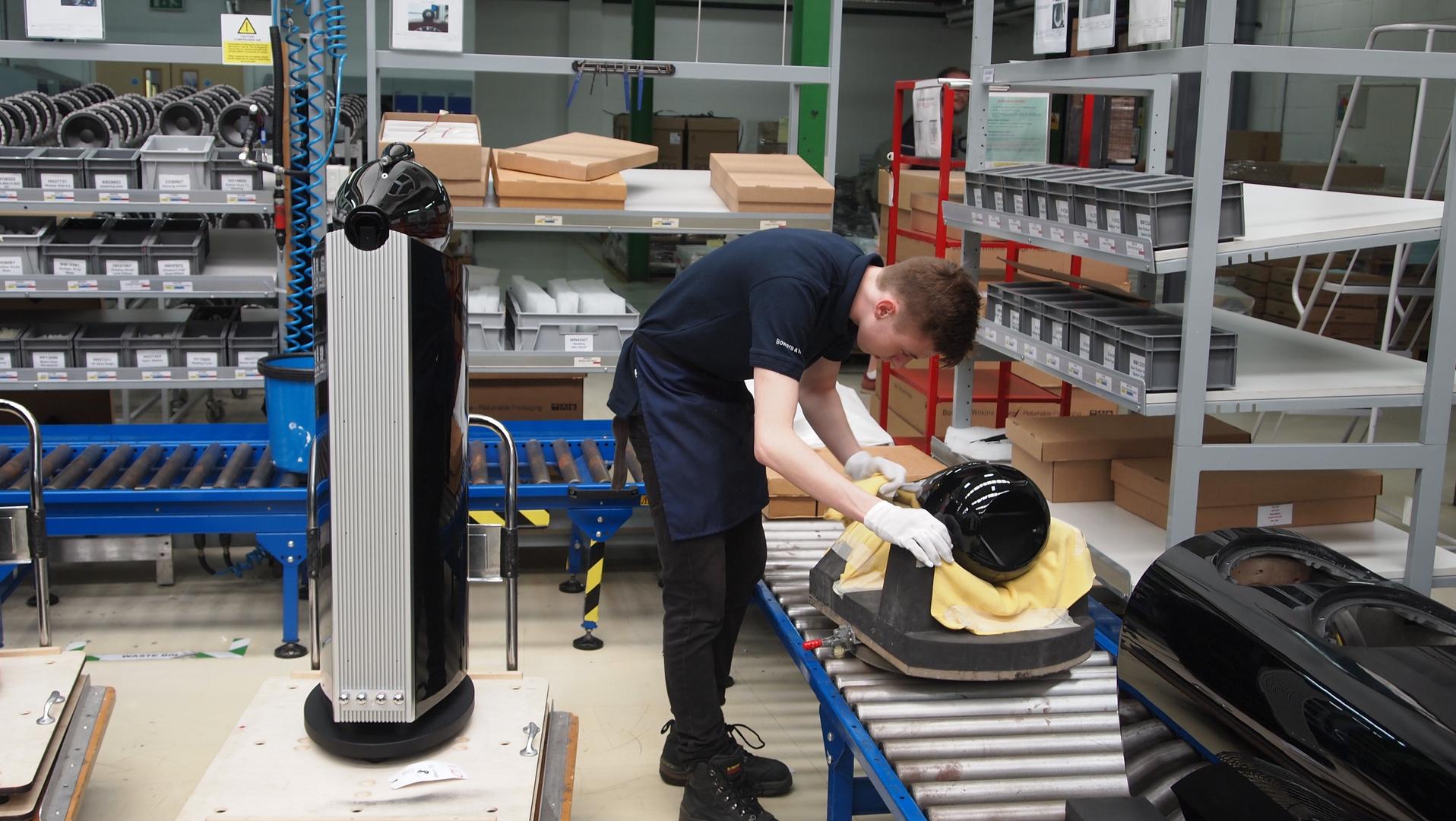 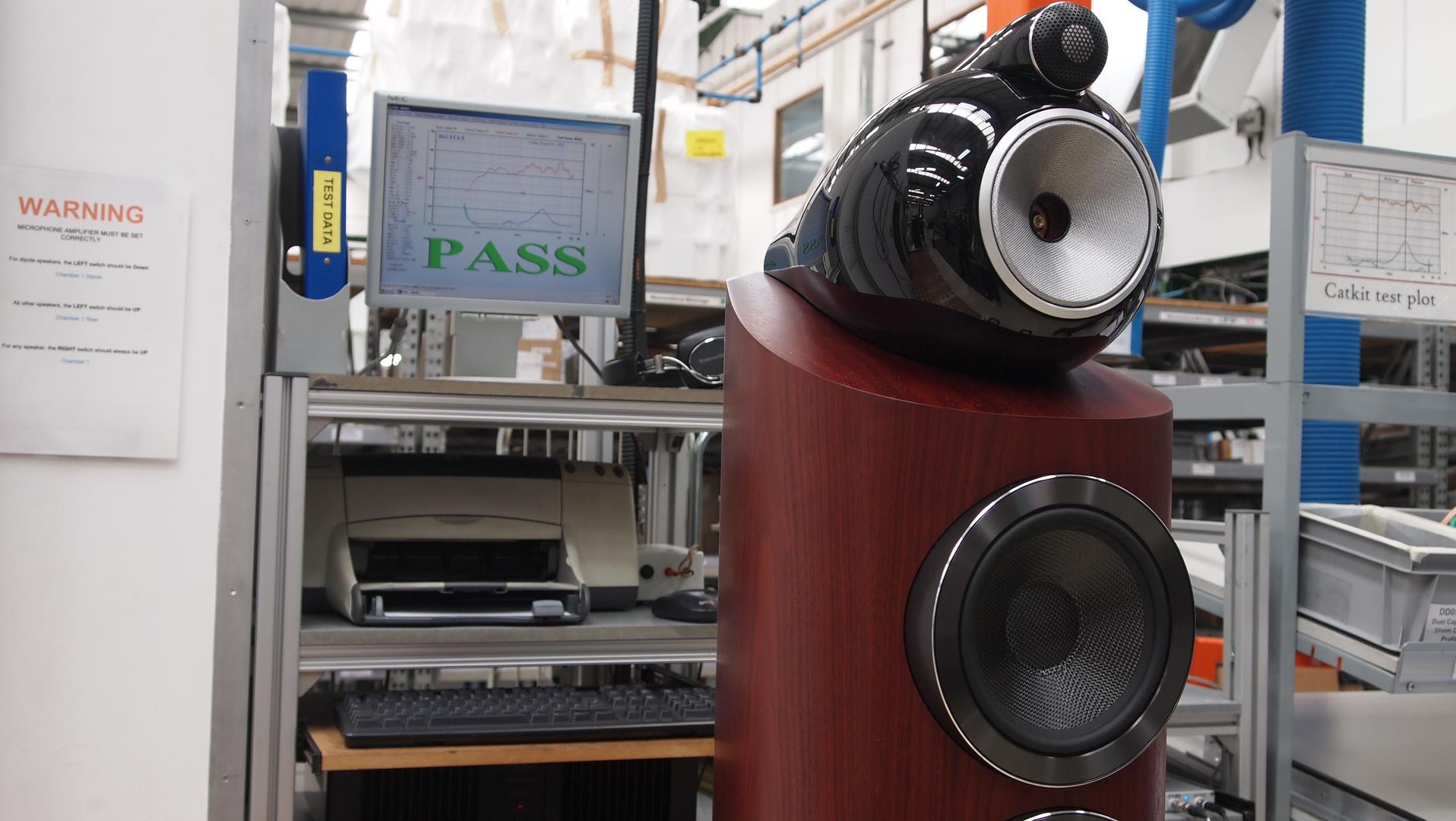 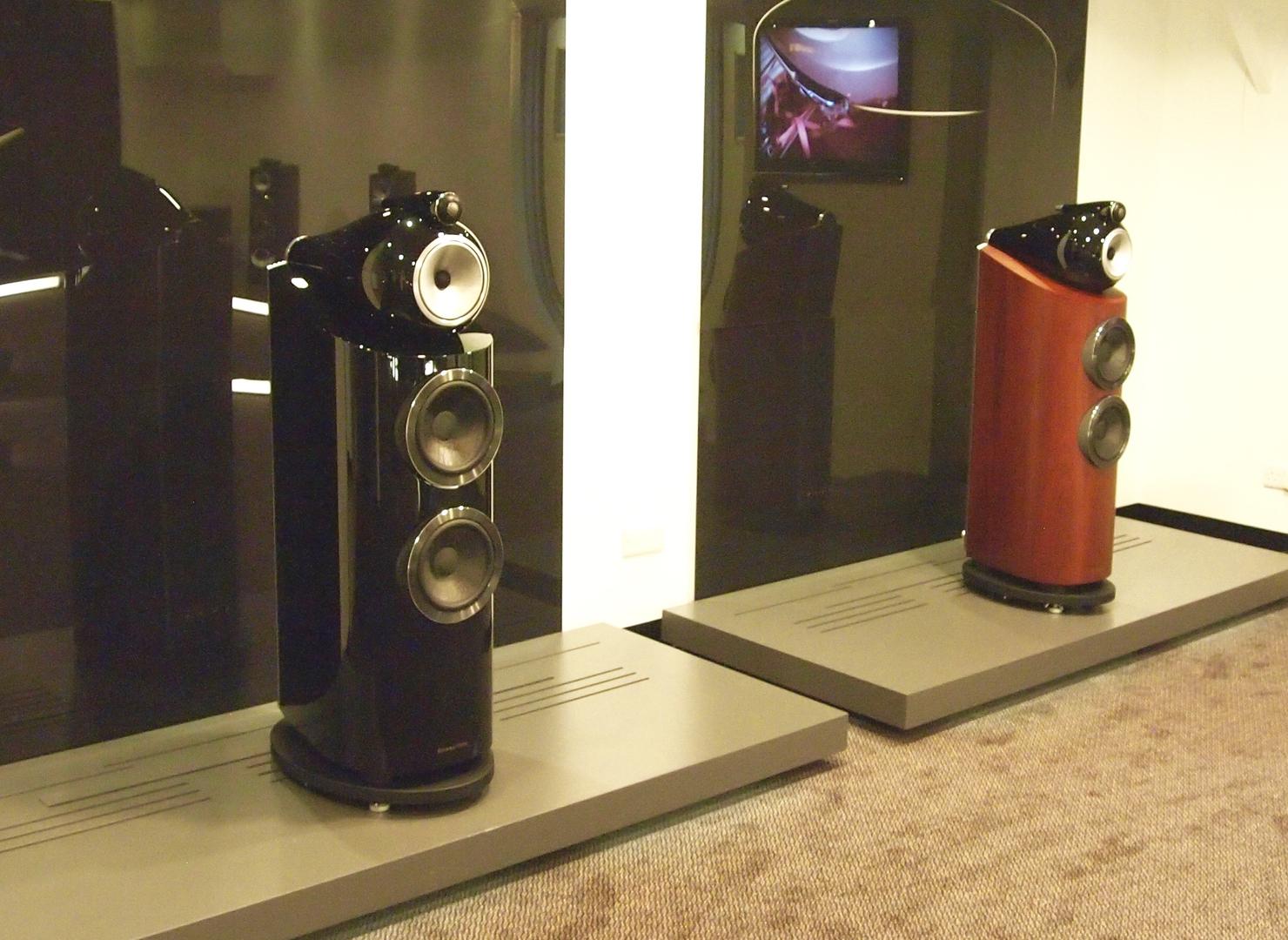 The following is a press release issued by Harman. NORTHRIDGE, […]

The following is a press release issued by Monarch Systems. […]

The following is a press release issued by Gold Note. […]

The following is a press release issued by ARCAM. CAMBRIDGE, […]