Well, at least most people I talk with are of this impression. Now that I have a pretty large listening room, I was curious to test B&W’s new $2000 CM6 S2 stand-mount loudspeaker with B&W’s iconic “Tweeter on Top” technology. I listened to them extensively in my smaller listening room, but I was also curious to hear how they would perform in my main listening room, now that it has doubled in size. In short, they performed surprisingly well overall, and exceptionally in the mids and highs with a generous helping of low-end pleasure.

Setup and Design
Even though I have a large listening room, I settled on a setup with the speakers eleven feet apart, and four-and-a-half feet from the rear walls, with a 20-degree toe-in. I tried placing them as far apart as possible for maximum soundstage width, but despite the CM6 S2’s wide tweeter dispersion, imaging began to suffer after about fourteen feet. Keeping the CM6 S2s less than twelve feet apart with a listening position around ten feet kept the imaging tight and the soundstage immersive. My listening preference is to have extremely tight and accurate imaging; I can tolerate a bit of brightness or lack of low-end extension, but a diffuse, inaccurate, or smeared soundstage drives me nuts. Even in a live setting microphones can be bright and bass can overload the venue, but rarely—if ever—is “imaging,” as we know it, off. With the proper toe-in for your room—in my case 20 degrees—the CM6 S2s can provide both a wide soundstage and detailed imaging.

The one caveat about toe-in relative to listening-position distance with the CM6 S2s is brightness from the tweeter, which can be overpowering if you are sitting nearfield in a small room. With these speakers, I found a toe-in that aims the tweeters a little wider than the edges of your ears worked best to produce a wide, precise, and not-too-bright soundstage. 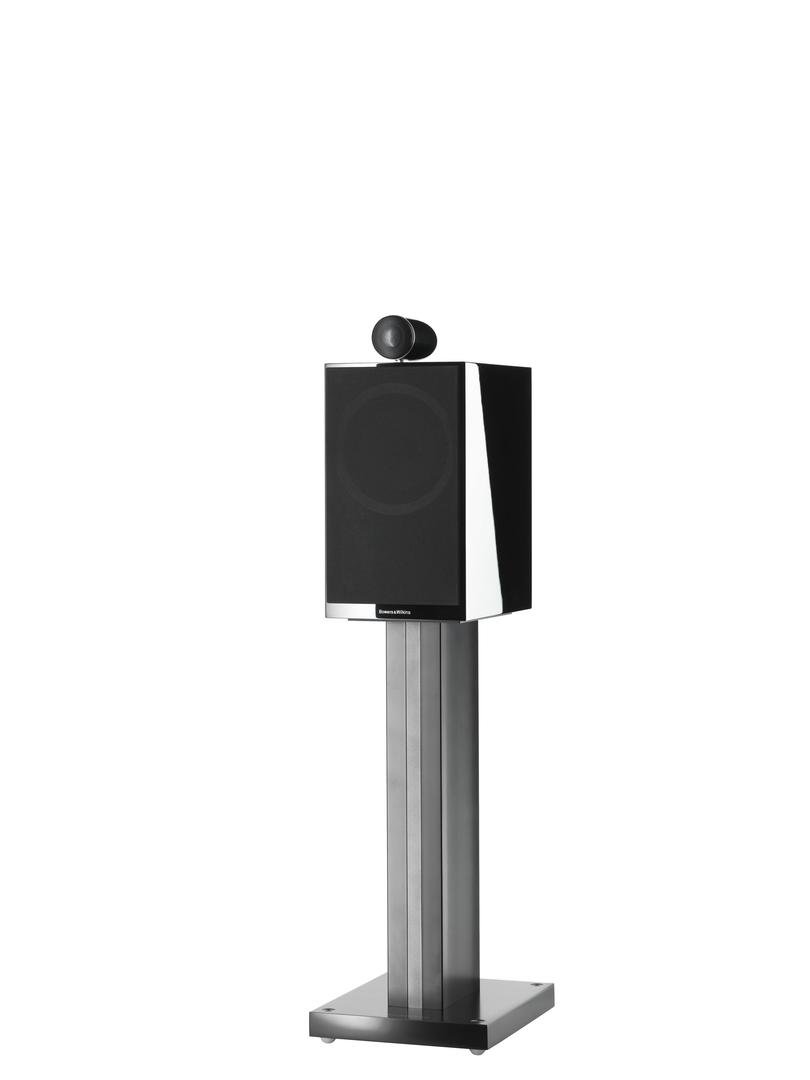 Surprisingly, the CM6 S2s are bi-amp capable, which I think would work best for those employing lower-powered tubed amplifiers. Although it’s great that these B&Ws can be bi-amped, I didn’t make much use of the provision in my listening tests. My tube amp produces 80W in triode, and 112W in ultralinear, and I preferred the sound of a single amp to that of two—at least with these speakers.

B&W’s iconic Tweeter on Top—more precisely described as a free-mounted, decoupled, double-dome aluminum tweeter—has been redesigned for the CM Series loudspeakers. The CM6 S2 is the only stand-mounted loudspeaker in the CM Series to employ the Tweeter on Top design, which is generally only found on its bigger—and more expensive—floorstanding siblings. So what’s the purpose of a tweeter housed in its own enclosure mounted atop the speaker? According to B&W, such a configuration isolates the tweeter from enclosure resonances, minimizes the diffraction of high frequencies by the enclosure, improves time-alignment with the midrange driver (and thereby reduces acoustic lobing), and allows fine-tuning of the tweeter itself.

The CM6 S2s have a sensitivity of 88dB and a nominal impedance of 8 ohms, which puts them right in the middle of the sensitivity range. I would recommend having at least 60W of amplification at your disposal, and preferably 100W. Remember, doubling amplifier power leads to a 3dB increase in SPL at 1m, so make sure you have enough juice if you like to crank it up every now and then, otherwise you could drive your amp to clipping, and that’s not good for your speakers, your amp, or your ears.

The CM6 S2 is available in three finishes: gloss black, satin white, and rosenut. (My review pair was finished in rosenut, but I have seen the gloss black and satin white elsewhere, and they look really sleek.) One of the cleverest design elements of the CM6 S2s is the provision for directly coupling the stands to the speakers with bolts, which not only prevents them from being bumped off their perches, but also better facilitates the transfer of resonant energy from the enclosure down to the spikes (and thence to the floor) at the foot of the stands. All in all, the CM6 S2s look good, are easy to set up, and offer a bevy of unique design features not typically found at this price point.

Listening
I could start off by talking about the mids and highs of the CM6 S2, but it was the low end of these stand-mounts that really surprised me. I recently reviewed a pair of MartinLogan Balanced Force 210 subwoofers (forthcoming), and when I hooked up the CM6 S2s I initially thought that the subs were still on. It wasn’t that the CM6 S2s went incredibly deep, but rather that they rolled-off at a much lower frequency than I was expecting. Bass extension is claimed to be 50Hz, with a -6dB point of 45Hz, which is plenty low for listening that doesn’t require huge SPLs. Sure, the sounds of a pipe organ or the lowest notes of an upright bass aren’t very powerful, but they’re still quite audible. If you listen mainly to small-scale classical, chamber music, piano, solo vocal, or acoustic, the CM6 S2s will provide sufficient low-end extension for your needs, especially if you’re in a smaller room. Even in my large room, bass-centric music was taut and precise—though lacking punch. And if you hanker for more bass, there is always the option of adding a subwoofer.

Of course, stand-mount speakers shine in the mids and highs. This was especially true when I listened to my favorite alt-classical composer Ludovico Einaudi. The tracks “Corale,” “Time Lapse,” and “Experience” from the album In a Time Lapse [Universal UK] were spectacularly detailed and crisp, particularly in the mids. I was also impressed with the amount of depth in the soundstage, which reflected the recording venue of this album—a monastery in Verona, Italy. I’ve found that many stand-mount speakers don’t seem to be capable of reproducing the ambience of this space, but the CM6 S2s did a fine job, if not quite a stellar one. The CM6 S2s produce a soundstage with plenty of accuracy in two dimensions—height and width—but they aren’t going to blow you away when it comes to depth, even with a very large listening-position-to-speaker distance.

Vocals, on the other hand, were really superb with the CM6 S2s. Rebecca Pidgeon’s oft-played Retrospective [Chesky Records] really shone with these speakers, and her classic rendition of “Spanish Harlem” was beautiful in almost every regard, save for the tweeters which tended sometimes to over-emphasize sibilants and make the highs seemed a bit bright. But the detail and accuracy were still there.

Listening to Chris Jones’ Roadhouses and Automobiles [Stockfisch] produced a very similar effect: great imaging, soundstage, and mids, but a little on the bright side. After playing with the setup some more, I found I basically had two choices—ease up on the brightness and sacrifice the imaging, or go for better imaging and tolerate the slight brightness. I went with the imaging, of course. I don’t want to give the impression that the CM6 S2s are harsh, but I’m young and my hearing is still very sensitive in the high frequencies, so certain instruments bothered me a bit. If high frequencies aren’t an issue for you, or if you like a little bit of added brightness, then these stand-mounts won’t present an issue. Still, be aware that the CM6 S2s have a bit of added top-end sparkle.

Conclusion
After the critical listening and evaluation of a speaker, I always ask myself a simple question, “Did I tend to listen to that piece of gear far longer than was necessary to complete my review?” With the CM6 S2s—despite their being a bit on the lively side for my taste—the answer was yes. In fact I listened to them well after the review period was over. When a speaker makes you want to listen to music, it’s a winner, simple as that.